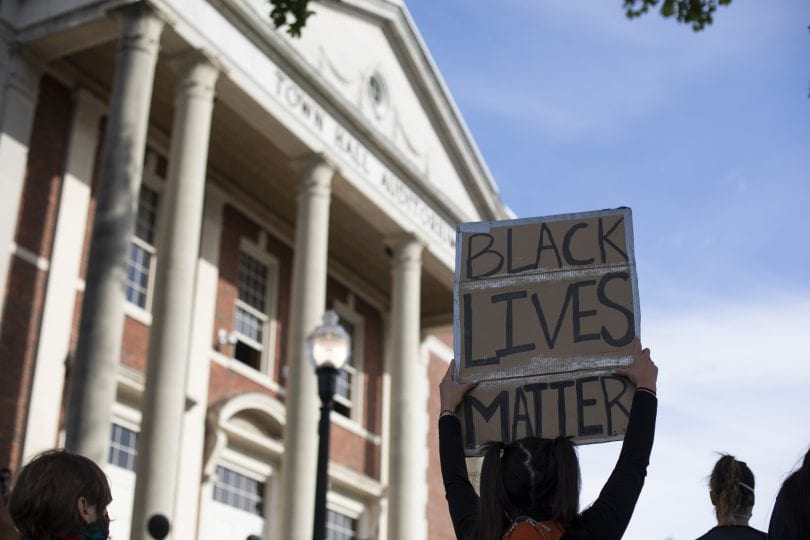 A Black Lives Matter sign held up outside of the West Hartford Town hall at an organized peaceful protest in West Hartford on June 2, 2020 in response to the death of George Floyd, who was killed by a police officer in Minneapolis, MN. Photo credit: Sofie Brandt (we-ha.com file photo)

West Hartford is one of the first Connecticut municipalities to adopt a measure declaring racism a public health crisis.

Members of the West Hartford Town Council took turns speaking at Tuesday night’s virtual meeting, emotion evident in their voices, and as they unanimously cast their votes approving a resolution declaring racism a public health crisis, each did so with enthusiasm and an indication that they were not just making a statement about a problem but also a commitment to doing something about it.

The resolution was brought to the Council by Tesisha Everette, executive director of Health Equity Solutions, who has been approaching Connecticut municipal leaders with the goal of ultimately driving policy change, the Connecticut Mirror reported. Windsor, Hartford, and Bloomfield, have also passed measures.

West Hartford Mayor Shari Cantor said the resolution she presented to the Council had been adapted slightly following discussions she had with scholars from UConn and others in the community.

“We wanted to do a resolution to state our priorities and focus,” Cantor said at Tuesday night’s meeting. “I think West Hartford has done a good job in many, many ways and we have focused on opportunity, justice, and equity but we are far from perfect.”

A health crisis, like the COVID-19 pandemic, affects everything, as does racism, Cantor said.

“This resolution declaring racism a public health crisis … this has been going on far, far, far too long,” said Councilor Carol Blanks, who is Black. The country is now facing not only the impact of the coronavirus crisis, which is impacting Black and brown communities to a greater degree, she said but these are “communities of color that have experienced systemic racism across the divide.”

Blanks said it’s not even clear where the health issues that are more prevalent in communities of color – a higher rate of hypertension, heart attacks, premature birth, diabetes, and other diseases – begin or end, but “we are past the point of where we need action. The debate has been endless.”

Then there were the activities of the past month, the proof seen in the murder of George Floyd, viewed by the world from a video taken by a brave 17-year old who witnessed the “cavalier” act and “saw the adults just stand in their place,” Blanks said.

Regarding the “elephant in the room,” Blanks said, “It’s smacking us in our face from one side to the other. … People are not just suffering, they are dying.”

Black lives matter, all lives matter, but more importantly, Blanks said, “Justice is needed for Black people and the time is now. … This is the start of the start. Let’s be sure, let’s be a leader.”

Deputy Mayor Leon Davidoff said Blanks could not have said it any better.

He said he has learned how important it is to really educate himself, to listen, and it’s “very, very important to get an understanding that for a long time people like myself have had the microphone and others have not. … We are all created equal and it’s time for us take action, enact action,” Davidoff said, because everyone’s liberty matters and all have the same opportunities and freedoms in this country.

Davidoff said he is encouraged that people from all walks of life are coming together to find a solution.

Republican Mary Fay said she grew up in East Hartford, a town that is racially and socioeconomically diverse, and chose to live and raise her daughter in West Hartford because it is an integrated community.

As a gay woman, Fay said she is also a minority and while it can’t compare, she knows that it hurts, what it’s like to feel “less than. … I am abhorred by racism,” she said.

Minority Leader Lee Gold said he looks forward to what will follow the adoption of the resolution. “While there is a significant public health crisis this resolution addresses … with this resolution I look forward to an enlightenment of sorts, equality for all, and respect for all.”

“There are resolutions that make me so proud to sit on the Council – resolutions like this,” Democrat Beth Kerrigan said.

“I cannot feel how it is to be Black or brown,” she said, but from her two sons she can appreciate what it is to be brown.

“Racism has had a long and pervasive existence … our commitment to our town is to all of our residents,” said Kerrigan, and COVID-19 has placed a spotlight on the fact that people of color have worse health outcomes. “There is no better time than now to address the disparities,” Kerrigan said, and its root: racism.

“I wholeheartedly support this resolution tonight. This has been and will continue to be a health crisis in this country until we do something,” Democratic Councilor Liam Sweeney said. “Black men have almost a 10-year shorter span on this planet than white men,” he said.

“There is no other reason than that systemic racism is affecting their outcomes,” said Sweeney, and addressing this and stating it publicly is a step in the right direction.

“One of the things that we are all getting over the past few months as we deal with the two pandemics – COVID and racism – is that we are getting a better handle on history,” Democrat Ben Wenograd said. We are learning about the flu of 1918, and, thanks to Black Lives Matter activists the country is getting educated on history we should have learned. Seeing the confederate statues come down is a reminder of our history as well.

“It’s valuable for us to now declare what is obvious,” Wenograd said, and that will help us start addressing it in a more systemic way. “Protests are great but we have to start doing something … I hope these things aren’t symbolic.”

Republican Chris Williams spoke at length about equality and the need to use the power of voting to replace politicians who advance discriminatory policies.

“No one should be discriminated against based on the color of his or her skin,” Williams said.

The U.S.A. is greatest country founded “because it stands for that all people crated equal,” he said, and government can’t take that away without due process “not from you, not from me, not from George Floyd.”

Williams said that Black Americans have contributed so much to our nation and our community, have shaped all aspects of our life. “Black history is American history,” he said, noting the comments made by Board of Education Vice Chair Lorna Thomas-Farquharson at the town’s Juneteenth commemoration last week.

He also expressed his support for the police, most of whom are respectable, for the need for school choice, and for action to be taken so all can raise their families in a safe environment.

Structural racism has existed for 400 years, and cannot continue, Cantor said. “When we can feel what a Black American family has felt for so long, this is not a ‘moment’ it’s a ‘movement,'” she said.

“I think this is a reckoning and we have far to go,” but she didn’t want to do a resolution without action, and needs the community to join town leaders in recognizing institutionalized racism, and recognizing it as a public health crisis.

“We have work to do and we have some goals we are setting,” Cantor said.

West Hartford’s resolution, which is provided in its entirety as a PDF below, includes action steps, among them the gathering of and analyzing of data on a quantitative and qualitative basis to assess inequities and improve diversity.

Included in the resolution is that West Hartford “shall work to progress as an equity and justice-oriented organization, by continuing to identify specific activities to enhance diversity and to ensure antiracism principles across our leadership, staffing and contracting.”