Total expenditures for the fiscal year that begins on July 1, 2019, will increase by $9.8 million, 3.42 percent, compared to the budget the West Hartford Town Council adopted for FY2019.

“As is true for virtually every town in the state, property taxes provide most of the revenues,” Hart told the Town Council. In West Hartford, 87 percent of general fund expenses come from property taxes, with intergovernmental revenue at 8 percent as the next largest contribution.

“We’ve relied on the governor’s proposed budget,” Hart said. State aid to West Hartford is expected to increase slightly this year according to the budget proposed by Gov. Ned Lamont last month, with the Educational Cost Sharing (ECS) grant up $335,129. Although the governor has proposed eliminating the reimbursement to towns for nurses at private schools, that cost – which in West Hartford is $685,920 – he is also proposing that the cost be the responsibility of the schools so that it will not impact the taxpayers. Hart said that he has already been in conversation with private schools in West Hartford and has taken a conservative approach in the budget.

How will it impact me?

What were the town manager’s goals for this budget?

“We want to try to ensure the right balance between spending and tax increases,” Hart told the Council. He said that staff worked hard this year to absorb new costs like the contribution to teacher pension costs (TRS,) and those costs that are rising beyond inflation levels like the MDC ad valorem.

The budget also maintains the undesignated fund balance at 9 percent, and depending on any surplus left at the end of the fiscal year, staff will present a proposal to the Council to increase that on an incremental level.

A final objective was to “continue our work to address pension and other post employment benefit (OPED) liabilities,” Hart said. That has been accomplished by reducing the discount rate from 7.25 to 7.125 to better reflect projected asset growth. In addition, the town has a 10-year plan to increase OPED funding to address unfunded liabilities.

How is the budget allocated?

The 3.42 percent increase in the spending plan is spread among town services, education funding, and capital financing.

Expenditures for town services, which account for 37 percent of the total budget, are proposed to increase $4,489,063, or 4.23 percent.

The town is in the business of providing services, Hart said. Fringe benefits and insurance – health insurance as well as property/casualty insurance – accounts for 39 percent of the town’s budget. “That category has grown over time and it is significant,” Hart said.

Wages and salaries are 38 percent, and operating expenses are 23 percent.

Public safety – expenses for the police and fire departments – will amount to 10 percent of the town’s total spending for FY2020. Public Works is 4 percent, other departments added together comprise about 6 percent, and non-departmental expenses – like the MDC ad valorem charge – total 18 percent.

Funding for education is approximately 57 percent of the town’s budget, and the proposed budget submitted last week by Superintendent of Schools Tom Moore to the Board of Education would increase spending by 2.89 percent ($4,745,378).

Negotiated salaries as well as the cost of special education and transportation are some of the primary costs driving the education budget increase. In addition, the Board of Education is absorbing an extra expense of $524,000 – the amount included as West Hartford’s contribution for TRS under the budget proposed by the governor last month.

While the Town Council can change the overall appropriation to the Board of Education, it cannot make line item changes.

The cost of capital financing (6 percent of the budget) will increase by $606,269 (3.45 percent) under the town manager’s proposed budget.

Capital financing – the cost for the what has been bonded – is primarily longterm debt and Capital Non-Recurring Expenditures (CNRE).

Major projects include work on the Fern Street Bridge, improvements to Wolcott Park and the Kennedy Park bathhouse, and updates to the indoor shooting range for the police department on Brixton Road. Hart said that the shooting range is already to some extent a regional asset, and there are ongoing conversations about partnering with area police departments.

Other capital expenses include $2.5 million over the course of two years for upgrades at the Yard Waste and Recycling Center, where the old incinerator will be demolished. In addition, a new Quint is scheduled to be purchased to replace the fire department’s 1991 pumper engine. 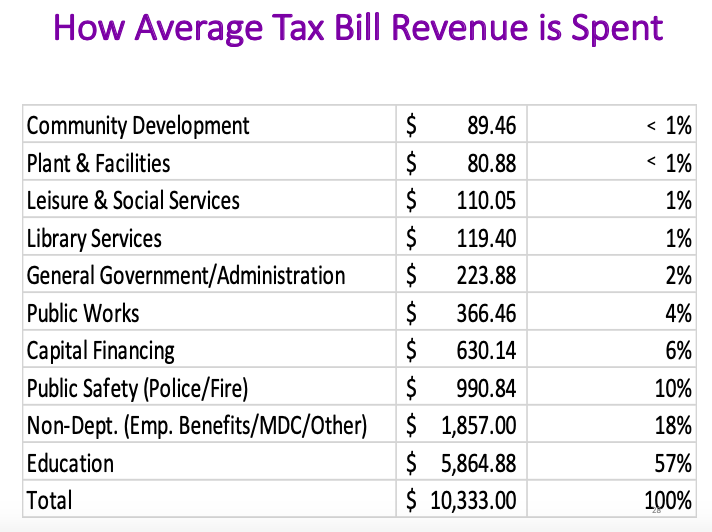 “Education is the lion’s share of every municipal budget in the state of Connecticut. In the small towns it can be as high as 85 percent,” Hart said.

What, specifically, are the budget drivers impacting town services?

The town’s contribution to the Metropolitan District Commission (MDC) is one of the major drivers of increased overall spending. The contribution has increased by $859,000, or 8.1 percent. Hart said that increase originally proposed was more than 11 percent, but the commissioners accepted some recommended adjustments before approving their budged in December.

The town is self-insured and health insurance has increased by $1,330,490 due to claims experience and retiree health care contributions. Hart said that amortization of surplus has not been proposed.

“We do have two new positions,” Hart said, noting that he had earlier spoken of some modest program enhancements. The two new positions are a lieutenant in the fire department and an additional public safety dispatcher.

In addition, the cost of one police officer is being transferred from the Parking Lot Fund – which is running a deficit and can no longer support the position – to the general fund. Two positions which were previously unfunded – a building maintenance technician and a financial systems analyst – are being proposed this year.

The total increase in payroll is $652,776, which also includes adjustments due to settled labor contracts.

An increase in temporary payroll of $114,228, some of which may be offset by grants, Hart said, will allow for the hiring of a part time recycling coordinator, emergency management coordinator, and a human resources specialist.

A contingency of $450,000 for unsettled labor contracts has been included in the budget. Contracts are still being negotiated with seven of the town’s nine bargaining units. 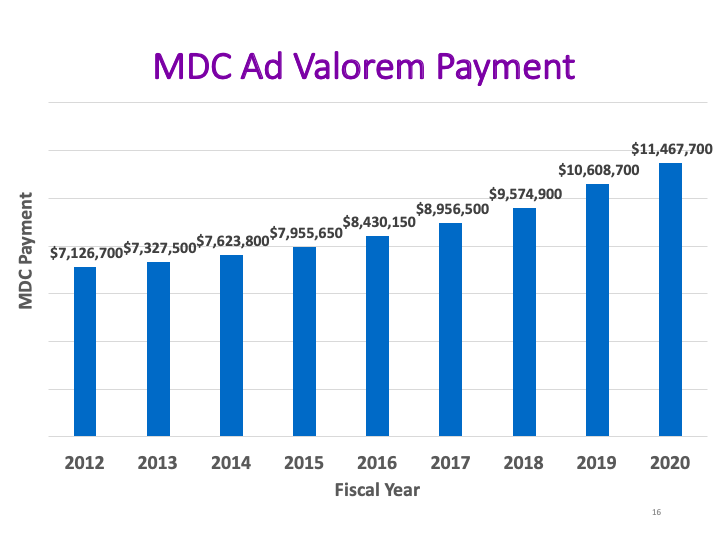 Pension liability funding is currently at 43 percent, and the funded ratio is planned to increase to 58 percent by 2030, Hart said. That ratio is subject to change based on asset performance and the town’s discount rate.

In the next fiscal year there will be a spike in ADEC, but the increase will begin to tail off, said Hart.

While unfunded accrued liability will increase for the next year or two, after that it will begin to decrease, Hart said.

Town Council committees will be discussing and reviewing specific portions of the budget from now until April 22, and the public will have the opportunity to comment on the budget at public hearings scheduled for Thursday, March 21 at 6 p.m. and Monday, April 15 at 2 p.m., both at Town Hall.

The Town Council is scheduled to adopt the budget on Tuesday, April 23. That meeting will begin at 7:30 p.m.

All budget documents are now available for review on the town’s website.