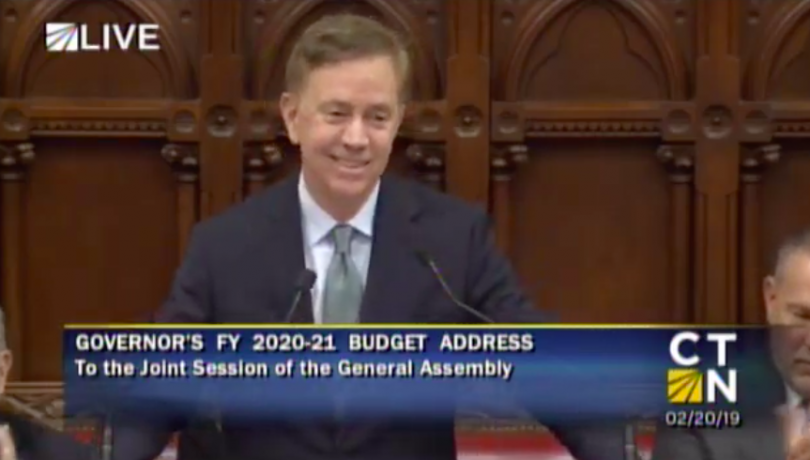 Gov. Ned Lamont presented his budget to the State Senate and State House on Feb. 20. Screenshot from CTN video of budget address.

Gov. Ned Lamont proposed his biennial budget for FY2020 and FY2021 on Wednesday.

Gov. Ned Lamont unveiled his first budget in a joint session of the State Senate and State House on Wednesday, proposing a two-year $43 billion spending plan that closes a multi-billion dollar shortfall, includes structural changes to addressing pension debt, expands the scope but not the sales tax rate, recommends a “debt diet” for the state, sets the groundwork for tolling, and increases overall Educational Cost Sharing but proposes a phased-in contribution to teacher pension funds.

While town residents will undoubtedly be impacted by many of the governor’s proposed revenue enhancements such as   paying taxes on items like dry cleaning, haircuts, and non-prescription drugs (a grocery tax is NOT in the mix), and the proposed “sin” taxes, West Hartford’s anticipated statutory aid package – which has fluctuated widely in budgets proposed in recent years – will increase slightly under the Lamont’s budget.

As part of the overall municipal aid package, however, the governor is calling for cities and towns to cover a portion of teacher pension costs – the “normal” costs that are actuarially-determined as the required contribution for future pension payouts – which equates to about 15 percent of the total pension contribution.

“The legislature is a co-equal branch of government and I need you at the table, helping me explain to business and labor, our mayors, our boards of education, and most importantly our taxpayers what we are doing and why,” Lamont said in his budget address. “Where we differ, don’t hold a press conference. Come talk to me! Let’s take a breath, and suggest a better alternative – but the numbers must add up.”

He said that he “will not allow this budget to be another scene from Groundhog Day, where I come to you year-after-year hat-in-hand lamenting the fact that we still haven’t addressed our structural deficits.”

Lamont also pledged to complete the process of adopting the state’s budget expediently so that towns can plan, understanding the struggles that have been created in recent years when the process has dragged on. The FY 2018 budget, that took effect in July 2017, was not approved until late October of that year.

“So, if you hate my proposal today, don’t wait until June to say no. Let’s get to yes – sooner rather than later,” Lamont said.

Mayor Shari Cantor, Town Manager Matt Hart, and West Hartford CFO Peter Privitera reviewed the numbers that were released Wednesday, with a focus on statutory aid which is a key component of the town budget that is now under development.

“I appreciate the difficult situation the governor is in, and I am very grateful for his understanding that mayors need to know what their budget is going to be,” Cantor said.

In his campaign Lamont said that he was committed to education, Cantor said, and she said she appreciates the level of funding that the town will receive.

“We have a diverse, efficient, effective education budget,” Cantor said, and while she would love to have more funding, said “we are appreciative of the commitment and consistency” of this proposal.

Hart said that West Hartford is reliant on state aid, and has few other revenue options. A drastic cut in funding would have exacerbated the property tax burden that residents already have, and he appreciates the governor’s commitment to municipal aid, as well as predictability and stability.

“I fought hard to protect education levels in the last budget so I’m encouraged that the governor did not propose a decrease in funding for West Hartford schools,” said State Rep. Derek Slap (D-19th), who is running for State Senate in the Feb. 26 special election to fill the 5th District seat left vacant by Beth Bye. “As with any budget proposal, there are things to like and plenty to dislike. That said, I appreciate the governor’s collaborative and bipartisan approach.”

While changes are likely before the budget passes, “we should work together, across party lines to make it the best plan possible,” Slap said. He is hopeful that will happen, and believes that the governor is sincere about his willingness to listen to all stakeholders.

“On first review, I’m happy to see Gov. Lamont’s budget proposal reflect West Hartford’s changing demographics with a slight increase in ECS funding,” said State Rep. Jillian Gilchrest (D-18th). She said that the proposal “aims to grow Connecticut’s economy while supporting working families,” and as a member of the Appropriations Committee she is ready to dive into the process.

“There were some ideas that the governor put forward that I hope stay in the final budget,” said State Rep. Joe Verrengia (D-20th). “And, of course, there are some ideas I hope we can avoid.”

Hart will be submitting West Hartford’s FY2020 budget to the Town Council on March 12.

“This is a very important piece in putting together the town budget,” Hart said. It’s difficult for the town budget to be finalized when there is uncertainty at the state level, he said.

“While there is always fear that things might change,” Cantor said, the ECS numbers are based on a formula that considers enrollment and need.

The proposal for municipalities to share in teacher pension costs “adds a new dynamic,” Cantor said, and may be met with challenges by the legislature, but is part of the new reality.

What’s important is “investment in the future, that will keep us competitive,” Cantor said.

Next week the Town Council will be voting to ratify a new firefighters’ contract, with elements that she believes will take the town in a more stable direction.

As West Hartford’s proposed FY2020 budget is finalized, Hart said that the town will continue to focus on efficiency, “whether it’s new technology, conserving or reallocating resources.” He praised Cantor and the Town Council for also working very hard on the town’s spending plan.

Balancing value with cost is challenging, Cantor said. Sustainability is key to growth, she said, and the town’s Grand List did grow this year and poised for additional growth in future years.

“The investments we make in infrastructure are catalysts for growth, and one is the New Park corridor,” Cantor said. “We need continued business investment and diversity in our tax base.”

More details about the governor’s proposed budget from a statewide perspective can be found here, and further analysis can be found on ctmirror.org.

Gov. Lamont’s proposed budget, as well as a fact sheet and FAQs, can be found here.