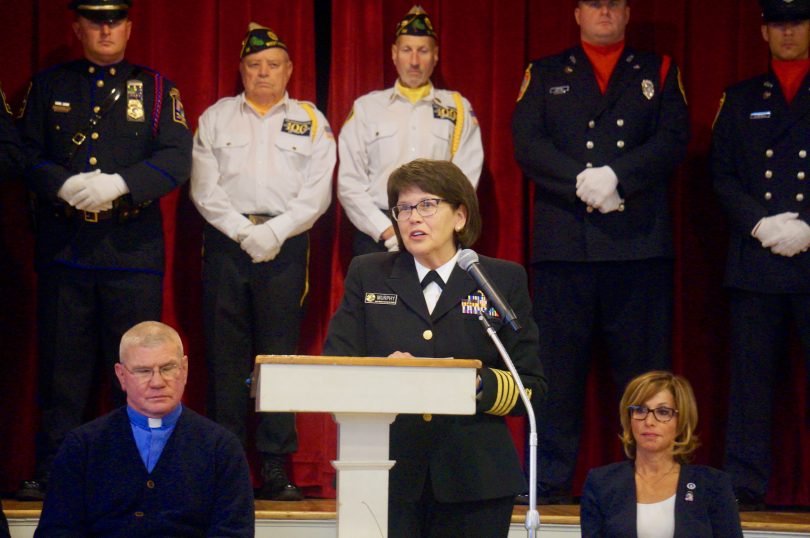 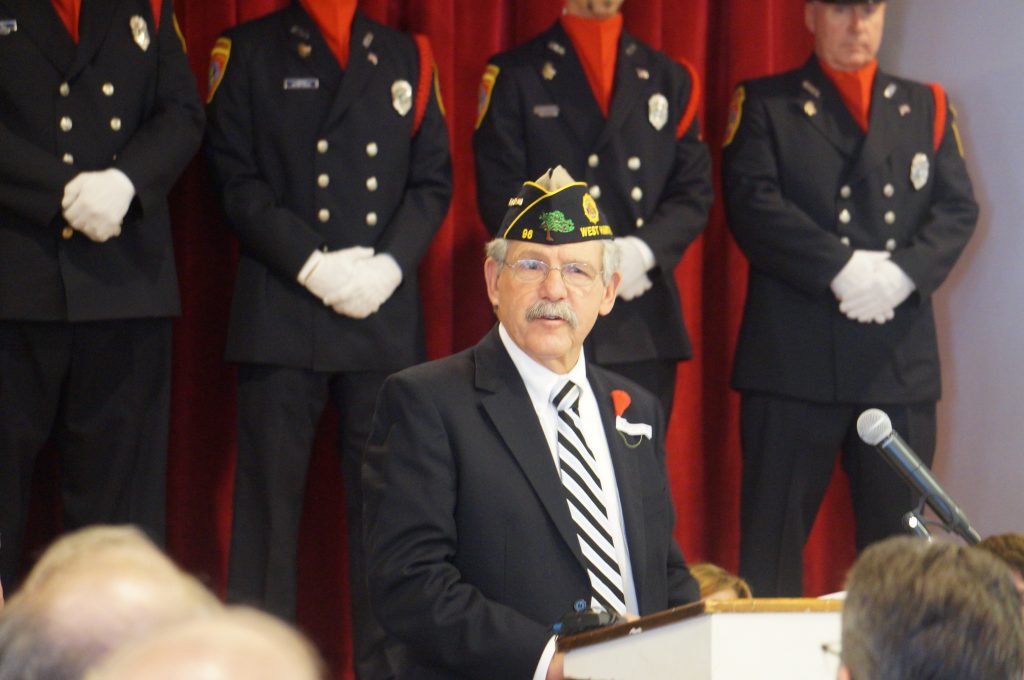 The Town of West Hartford held its annual Veterans Day ceremony Monday, as veterans, elected officials, and members of the community convened in the auditorium of First Church on South Main Street at 11 a.m. on Nov. 11 to pay tribute to all who have served.

The annual ceremony is hosted by American Legion Hayes-Velhage Post 96, and past post commander Moe Fradette reprised his traditional role of emcee. 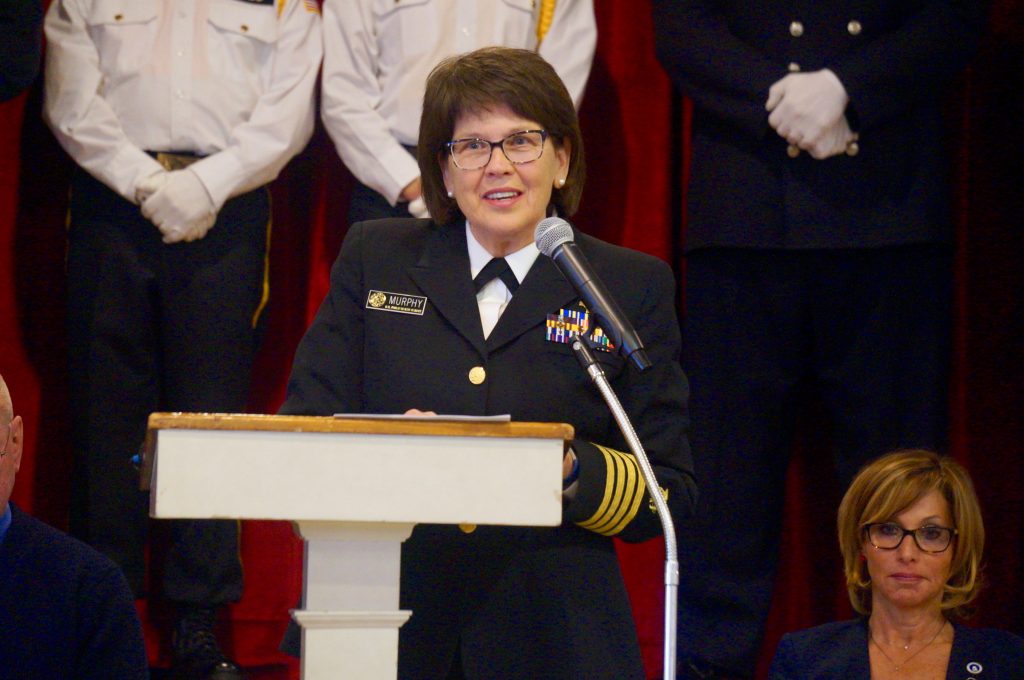 Capt. M. Patricia Murphy, a West Hartford resident who is a member of the U.S. Public Health Service, was this year’s keynote speaker, and to begin her speech she educated the audience on the role of the Public Health Service – which includes a variety of professions and involves “work abroad as well as in the United States to help prevent the spread of communicable diseases.”

Murphy, who is trained as a pharmacist, is currently assigned to the U.S. Food and Drug Administration as a regulatory officer. She was the first team leader of the Northeast Region Regional Incident Support Team (RIST) when it was established in 2009 and continues as an active member of the team – which is tasked with responding to public health emergencies and urgent health needs triggered by disasters or other events worldwide.

The U.S. Public Health Service (PHS), which has hundreds of duty stations around the world, Murphy said, is also involved in behavioral health support, which currently includes a role with migrant children separated from their families. PHS also cares for members of the U.S. Coast Guard and now is beginning to provide direct care for veterans in VA hospitals.

“We’re excited about contributing to advancing the quality of care within the VA,” Murphy said, including support for substance abuse prevention, treatment, and recovery services.

While PHS officers don’t bear arms, Murphy said, “we are an important part of supporting missions of all the uniformed services by what we do.

“Veterans Day serves a very important purpose. It is a day we recognize not only those who have given their lives  … this day, above all, is a day to celebrate the choice one makes to serve his or her country,” Murphy said. “Thank you to those who have served and those who continue to serve today.” 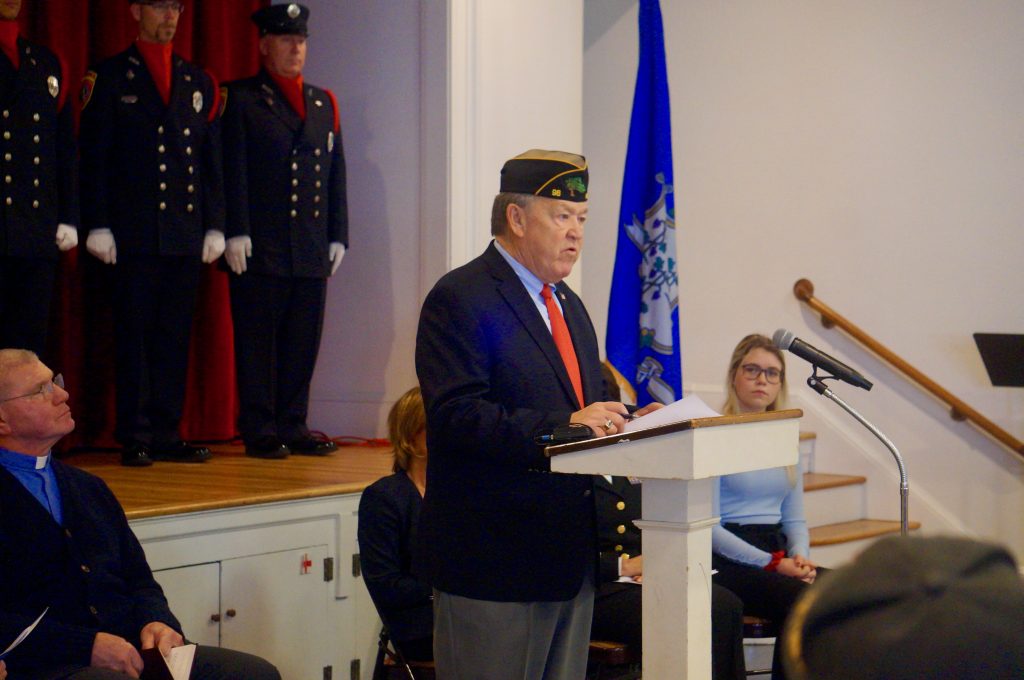 The depth of emotion many feel about their service was clearly evident as Post 96 Commander Patrick Harrell, a U.S. Marine Corps veteran, stepped up to the podium and began his speech. After noting that membership in the American Legion is now open to peacetime as well as wartime veterans, he spoke about his time in Vietnam.

Fifty years ago two events that had a profound impact took place –  the moon landing and Woodstock – but Harrell said he missed both of them, “because I was in harms way, in the jungles of Vietnam. My first day in country, I joined my unit engaged in a battalion sized combat operation … It was a textbook operation,” he said, his voice breaking as he recalled the swarms of choppers shuttling supplies and removing the wounded to the ships offshore.

Later that night, Harrell said he sat in his foxhole, gazing up at that bright moonlit sky, thinking those guys were up there. It was the very day Neil Armstrong had taken his first steps on the moon. “One small step for man, one giant leap for mankind. … I couldn’t help but wonder about the steps and leaps that lay ahead for me, one day down, 363 to go.”

Harrell said he completed his short-term calendar, “and like most veterans tucked that year’s experiences back in the far reaches of my mind.” It wasn’t until 30 years later, when he spoke about his Vietnam experience to a class his sister was taking at Manchester Community College, that he really began healing.

“I like to think I and my platoon survived that year’s ordeal mainly due to a respect and compassion that we held for the other side,” Harrell said. While most Americans were committed to a year-long tour, “our adversaries were there until they won, or died,” he said.

“I pray that the next conflict be a global one, a united world campaign agains the pollutants that sour our planet’s ecology,” said Harrell. “This blue marble spaceship that we call earth is unique in the universe,” he said.

“Service to our nations, our veterans, our community, and our youth … constitutes the American Legion’s mission,” he said. As Harrell concluded his speech, the audience burst into applause, giving him a standing ovation. 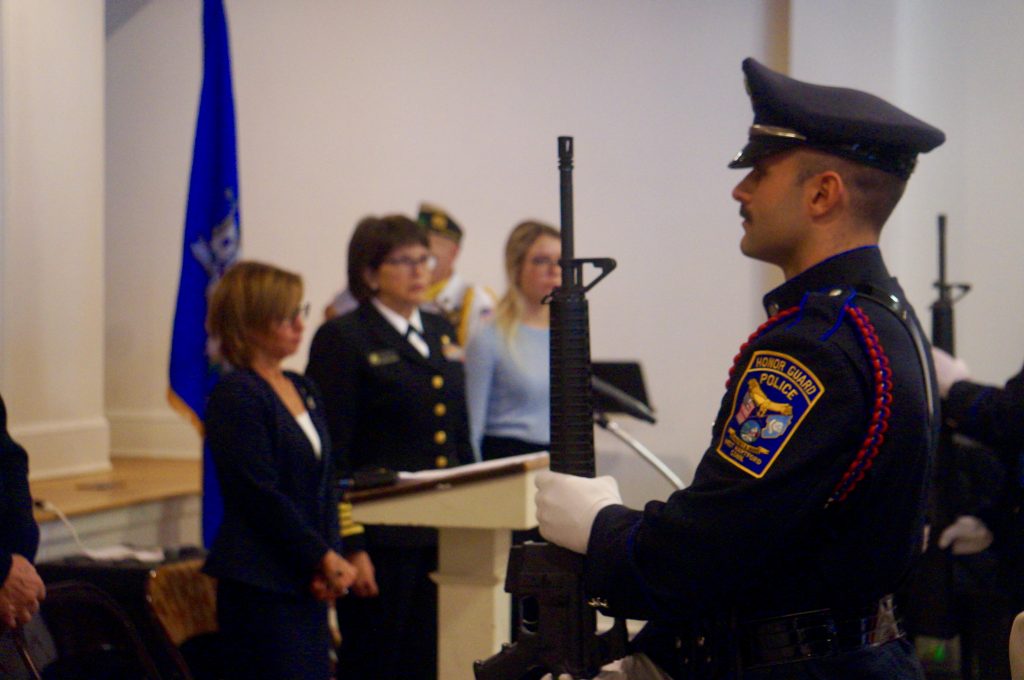 Mayor Shari Cantor spoke to the crowd about John Braxton Robinson, a former enslaved man who enlisted in the infantry at age 16 – under the name of John Smith – and eventually settled in West Hartford in 1868, working as a fish peddler.

He was able to amass wealth, Cantor said, and purchased a house at 1070 Farmington Ave., at a time when very few African-American men were even independent, and he even garnered a mention in the Hartford Courant, which was also unusual for the times.

“This short historic description of this one African-American Civil War veteran is just a drop in the bucket of the millions of stories of American veterans,” Cantor said, “veterans of all races and creeds, genders and religions.

“As we mark this Veterans Day we recognize all of these untold stories, we remember today the experience and service of one of our community, but we think about the experiences of all of our veterans and their families,” Cantor said.

“Veterans sacrifice for our country and they have earned our lasting gratitude,” Cantor said. As we honor our veterans and we remember their great deeds, let us also salute those who are currently fighting for our freedom. We think about you and thank you and your families who also give so much. … God bless all of you, God bless the town of West Hartford, the state of Connecticut, our country, and our world.”

The memorial wreath was brought forward, and following the ceremony would be placed in the cemetery on North Main Street where many veterans are buried. Wreaths were placed at the Veterans Memorial and Fairview Cemetery as well.

Rev. Dana Hallenback, a former West Hartford Police officer who also served as director of Public Works for the town, delivered the invocation and benediction Monday, and Conard junior Stephanie Reuning-Scherer performed stirring renditions of both the National Anthem and “God Bless America.” 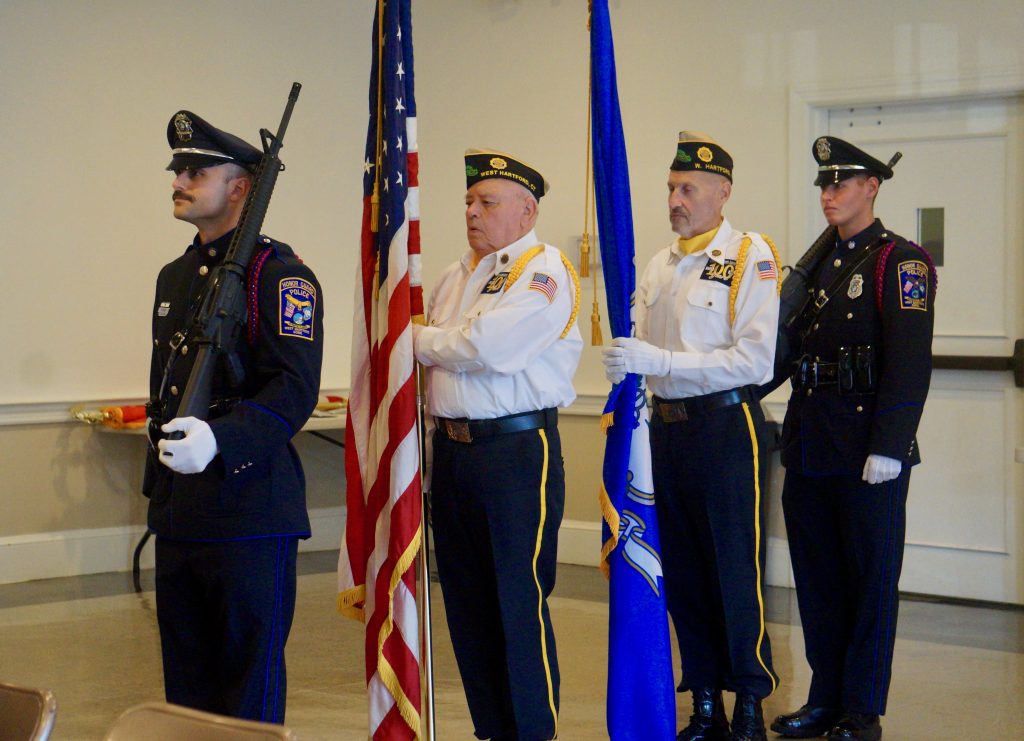 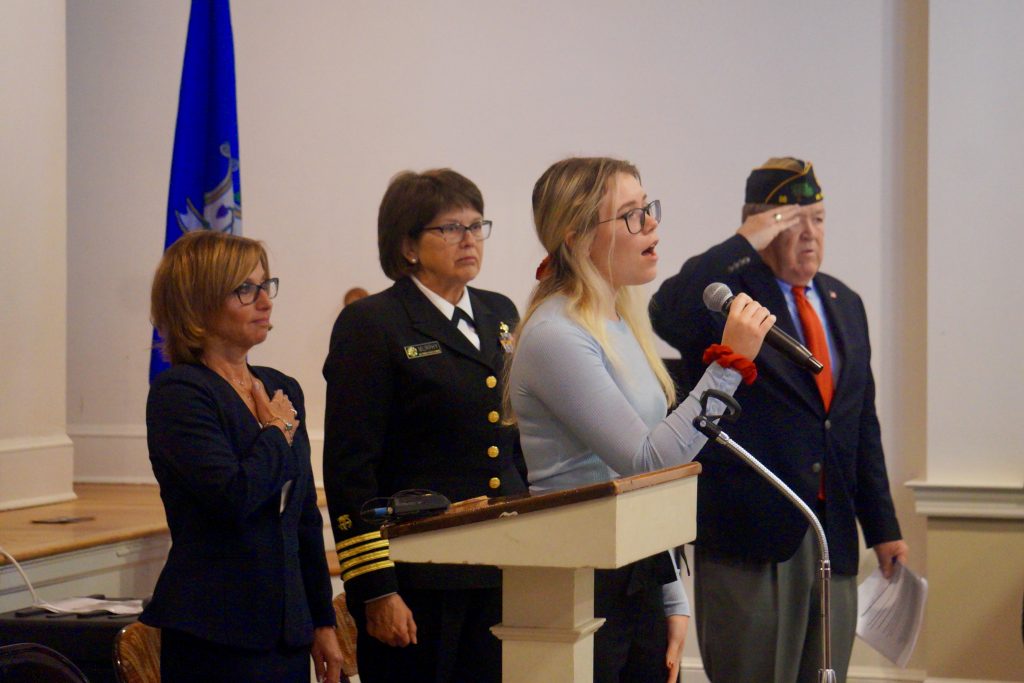 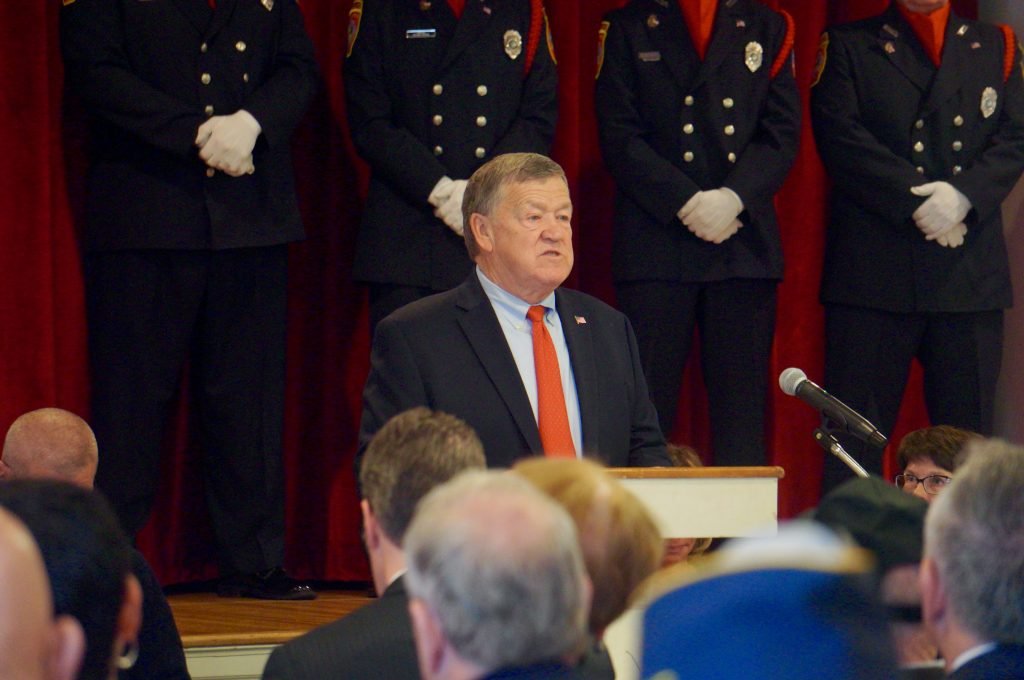 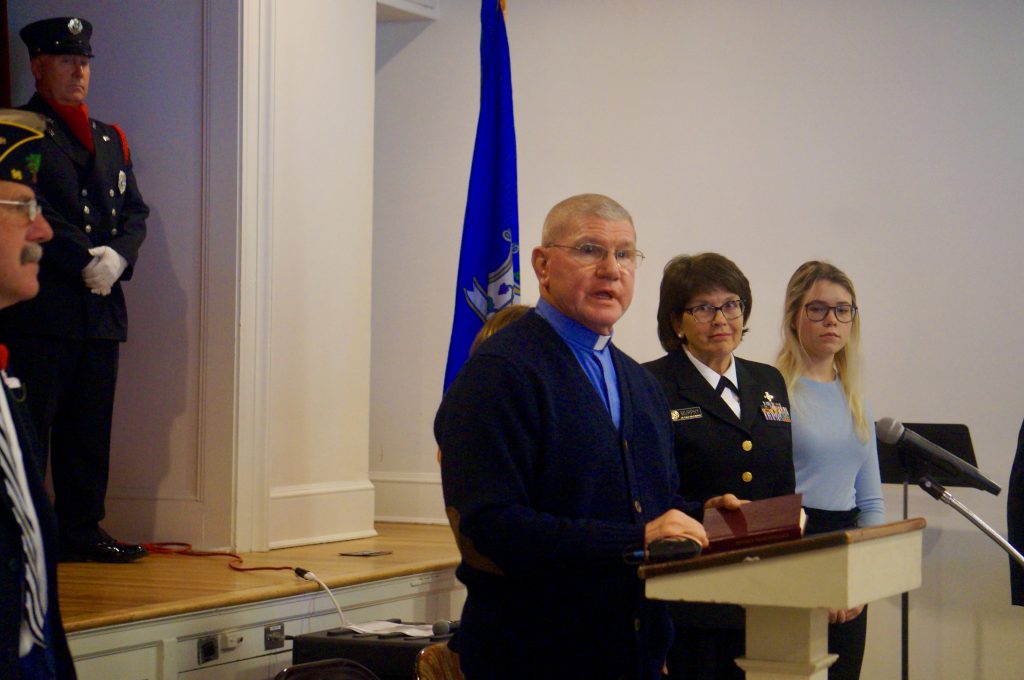 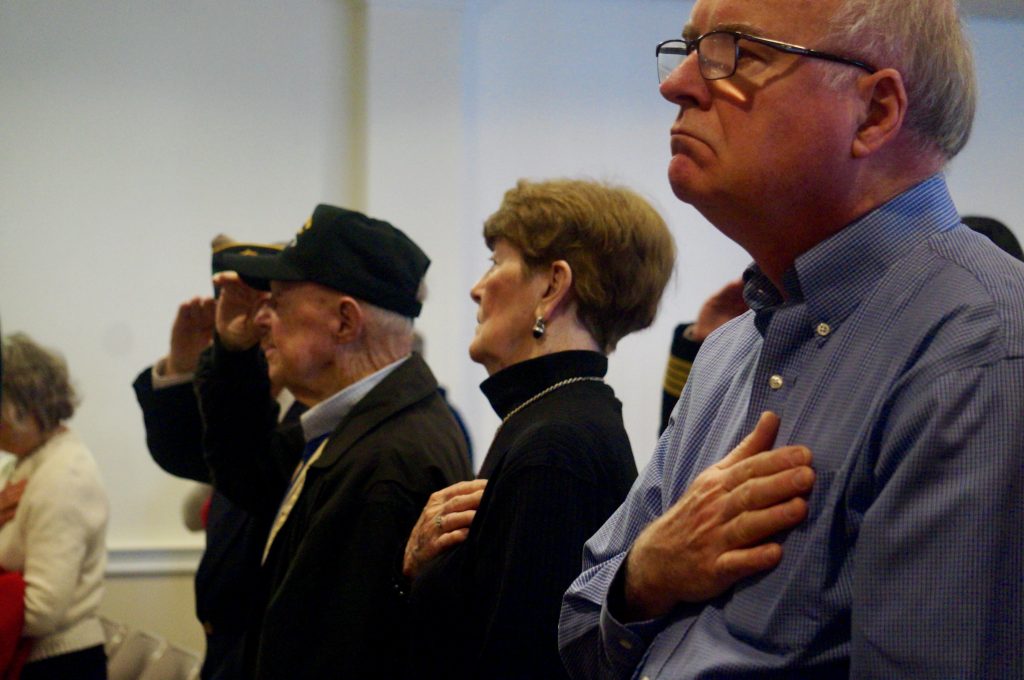 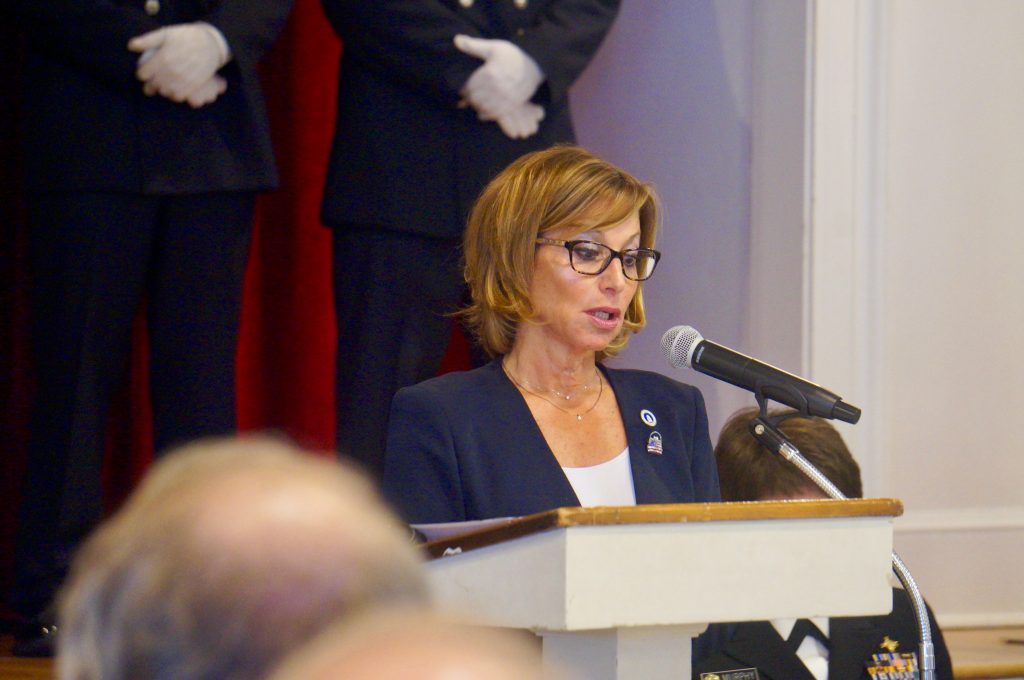 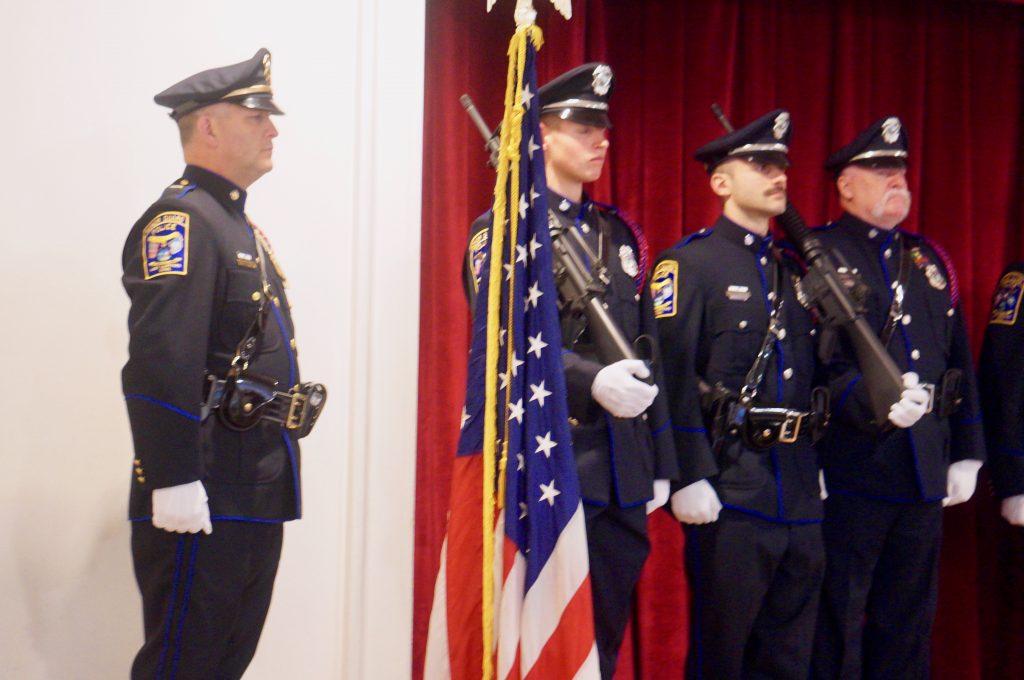 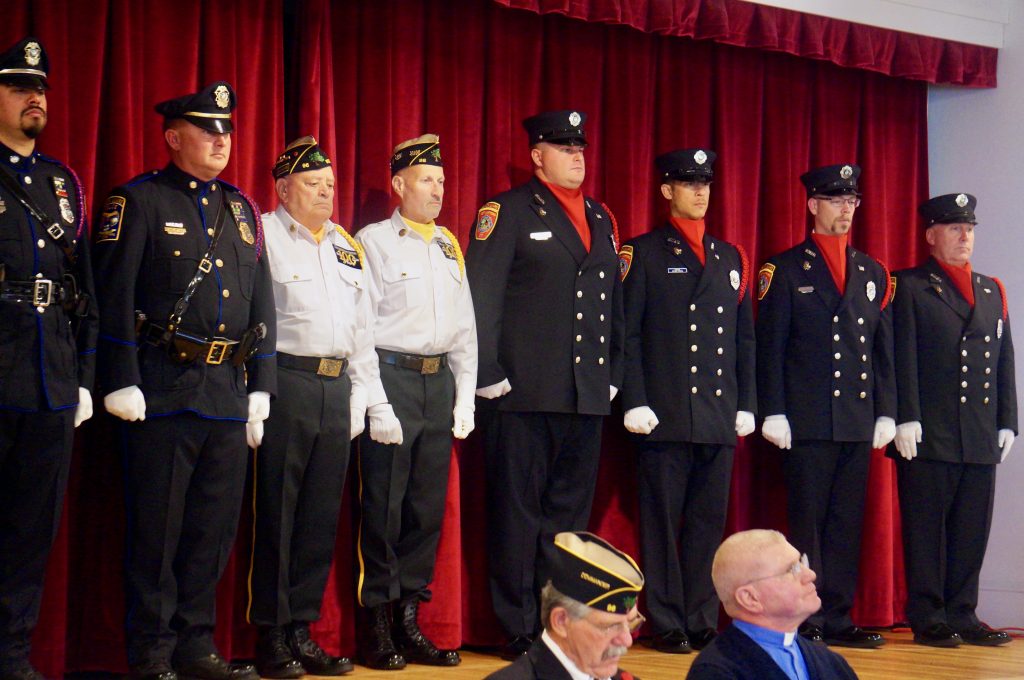 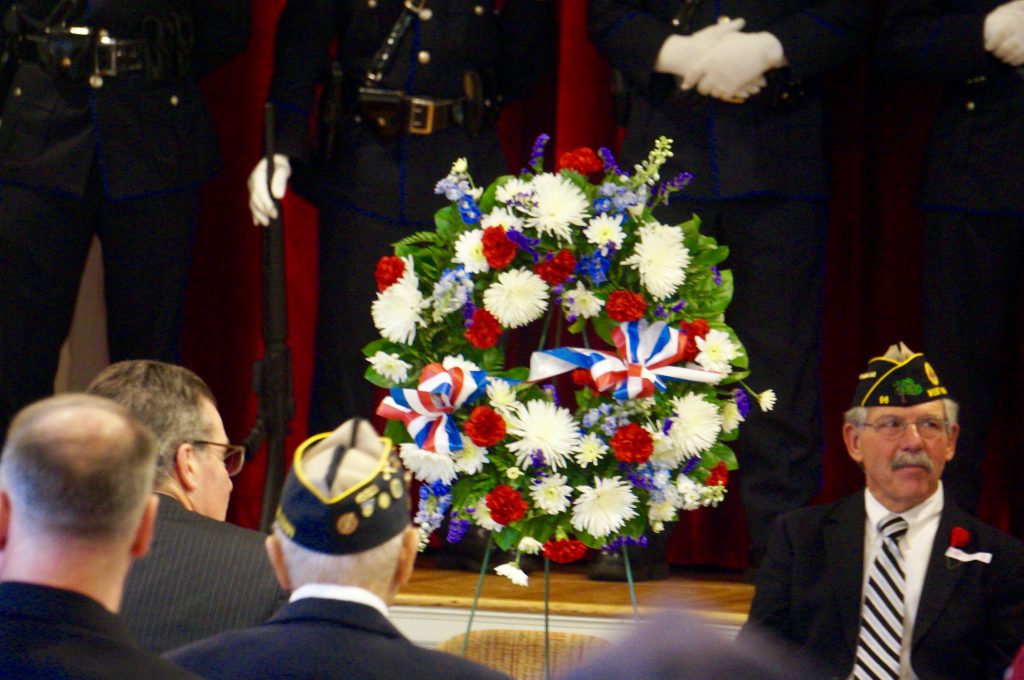