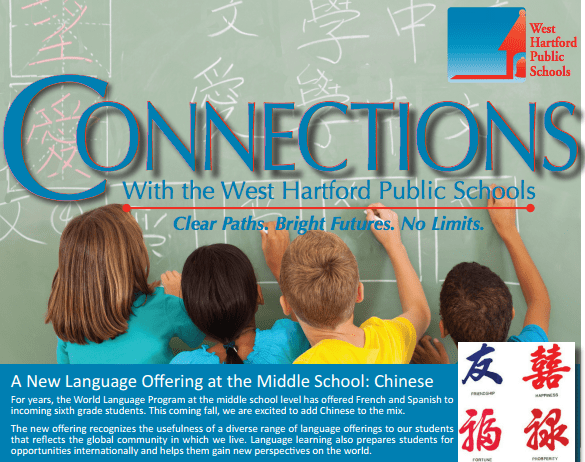 West Hartford Public Schools highlighted the new Chinese language offering at the middle school level in a presentation to the Board of Education and in its 'Connections' newsletter.

Beginning in the fall of 2016, Chinese will be added as an optional world language at the middle school level in West Hartford Public Schools.

West Hartford Public Schools highlighted the new Chinese language offering at the middle school level in a presentation to the Board of Education and in its ‘Connections’ newsletter.

West Hartford Public Schools will enhance the world language offerings at the middle school level beginning this fall with the introduction of Chinese as an option for incoming sixth graders at all three middle schools.

Assistant Superintendent for Curriculum, Instruction and Administration Dr. Nancy DePalma told the West Hartford Board of Education last week that the addition was considered as the priorities of the World Language Department were reviewed. The department’s mission is to support “21st century skills of communication, collaboration, creativity, and critical thinking helping to develop lifelong learners and engaged members of the global community.”

In West Hartford, Mandarin Chinese has also been identified one of the top five native languages spoke in students’ households, DePalma said.

Languages offered in West Hartford Public Schools currently include Spanish at the elementary school level in grades 3-5 at all schools other than Norfeldt, where French is offered instead. Charter Oak International Academy offers Spanish instruction beginning at the pre-k level, and it has already been announced that Chinese will be offered at Charter Oak in the fall beginning at the kindergarten level as the school moves to its new building and is working to attract a larger magnet population.

World Language Department Supervisor Lucy Cartland said that providing the opportunity to begin Chinese language instruction at the middle school level will make a major difference in creating another pathway to proficiency in a language by the time students reach 12th grade, and will put Chinese – a more challenging language to learn because of the characters – on equal footing with French and Spanish.

“It’s a critical and relevant communication tool to prepare [students] for the global economy,” Cartland said in her presentation to the board.

Supervisor Elena Sada said that incoming sixth graders who choose Chinese will be asked to commit to study it for all three years of middle school, in order to provide communications skills and establish a successful pathway. “The spiral curriculum builds on learning, and will focus on same areas of development as with other languages,” Sada told the Board of Education. Chinese language will be taught through phonics as well as a systematic introduction to the characters, she said.

Chinese culture will also be part of the curriculum, Sada said.

The Chinese language program will be phased in over a three-year period, beginning with sixth graders in the 2016-17 academic year. It is anticipated that students who begin Chinese at the middle school level will be ready for Chinese III at Conard or Hall.

Cartland said that the world language teachers have already started visiting the elementary schools to discuss middle school language options with fifth graders. They will be able to say, “Gracias, merci, and now xiè-xie,” she said.

Board member Jay Sarzen said he was “very excited about what we’ve heard tonight,” with his main concern being that sixth graders are being asked to commit to a path at such an early age. Cartland responded that the same commitment is expected from those who choose Spanish or French, and is also important so that the students will be able to enter high school with a credit already on their transcript.

“One language is not better than the other, but what’s the best language for you,” is the question, Sada said.

In response to a question from Board member Dave Pauluk about where students will be able to practice their Chinese, Cartland said that West Hartford Public Schools already sponsors trips to China and there are more than 60 students planning to travel there this spring. Students also visit Chinatown in New York City and teachers “reach deeply” into the local community to gain a greater cultural understanding. West Hartford is also part of the “Confucius Classroom,” which brings more cultural support to the classroom experience, Cartland said.

Conard student representative Zacharie Mega, who has taken Chinese for several years, said that in his opinion beginning the language at the middle school level is important. He said the language is not easy to learn. “Lots of kids want to join [the Chinese language program] and if they are able to join earlier it would be very beneficial,” Mega said.

“I can’t contain my excitement,” Board Chair Mark Overmyer-Velazquez said of the introduction of Chinese at the middle school level. Multi-lingual development at an earlier age is critical, as is the empathy piece, he said. “This is not just about adding a new language it’s about making better people,” he said.