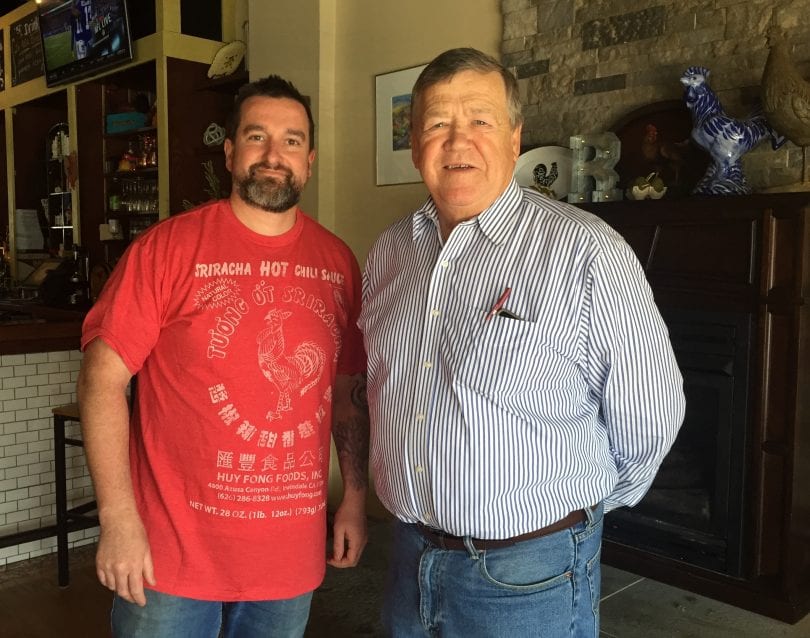 KC Ward, a West Hartford native who is chef/owner of the Rooster Co. in Newington, will launch a new restaurant concept in the building owned by American Legion Hayes-Velhage Post 96 at 45 Raymond Rd. in West Hartford. 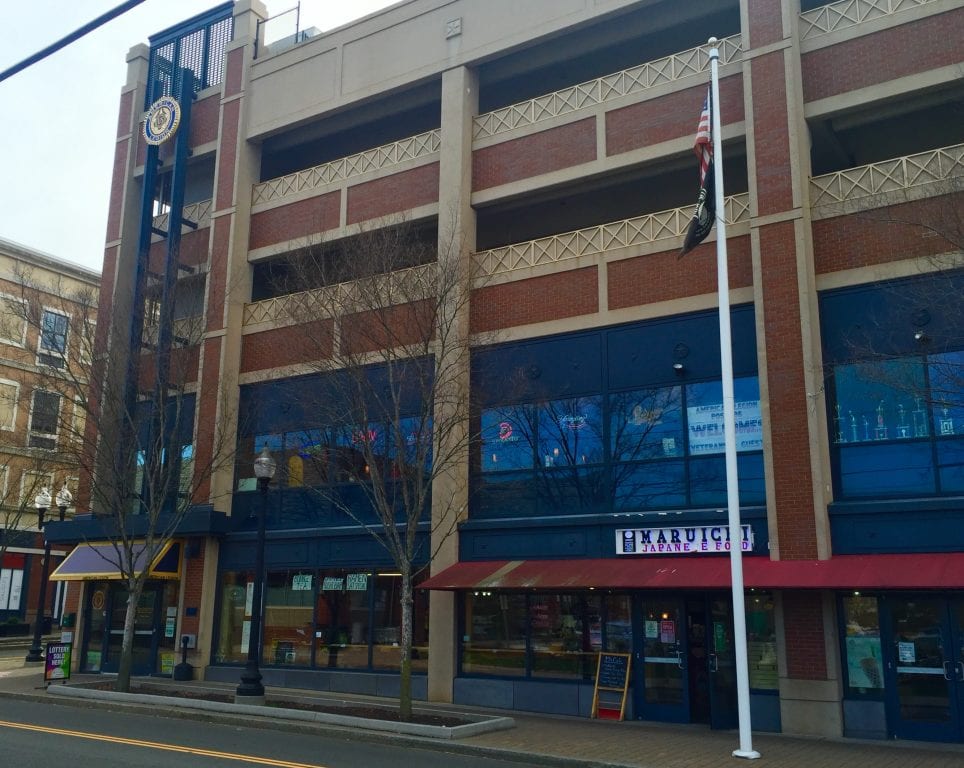 The American Legion Hayes-Velhage Post 96 will lease the space to KC Ward for the new restaurant, Flora, but will continue to own the building and hold meetings there. Photo credit: Ronni Newton

American Legion Hayes-Velhage Post 96 is about to celebrate its 100th birthday, and as leadership looks toward the future some changes are in the works that Commander Moe Fradette said will allow the organization to focus on its mission.

In July, chef KC Ward, who currently owns and operates the highly successful Rooster Co. in Newington, will begin leasing and operating Hayes-Velhage Post 96’s restaurant space. In September he plans to reopen the space as Flora Restaurant and Bar.

Once Flora opens, Post 96 will continue to hold meetings in the back room – where the fireplace is located. American Legion members will still be able to get their parking validated, even after the Isham Garage moves to a pay-by-license-plate system, Fradette said.

“We will still meet. We will still encourage members to meet and socialize. The only change is who is running the kitchen,” Fradette said. Joe Pajak, the current chef, will remain and will be employed by Flora.

As the post nears its 100th birthday, Fradette said leadership put together a group that included the executive committee, board of trustees, and finance committee to consider where they are and where they want to be. “It was our opportunity to plan our vision for the next five years and execute it,” he said.

“What we’re supposed to do is support our four pillars,” said Fradette. Those pillars are: support strong national security, take care of veterans, mentor youth, and promote patriotism and honor.

What they have really been doing for the past several years is focusing on keeping the post open and being in the food business, Fradette said.

Giving up the task of running the restaurant will allow the organization to get back to its mission, and will provide cash flow from the lease that will support scholarships and other outreach.

Activities of Hayes-Velhage Post 96 currently include recognizing a West Hartford police officer and firefighter of the year, offering scholarships, honoring graduating high school seniors who will be entering military service or ROTC, holding Veterans Day and Memorial Day celebrations at schools and in the town, and sending students to Boys State and Girls State – educational programs held each summer focused on leadership and citizenship.

“That’s what we want to do more of,” Fradette said.

The membership is getting older, and the average age is 71½, Fradette said. There are about 400 members of Post 96, about 250 of whom live in West Hartford or the immediate area. Eligibility to join requires that a veteran must have served during a conflict. The youngest eligible are those who have served during the ongoing War on Terror, and other members have served in the Gulf War, Vietnam War, or Korea. A few World War II veterans remain.

Few members go to the American Legion on a regular basis, Fradette said. Use of the restaurant is officially open to members and to their guests.

Hayes-Velhage Post 96 outrightly owns its building on Raymond Road and has since 2007 – an arrangement made when Blue Back Square purchased, demolished, and built on the post’s previous location on Memorial Road. The building is physically located in Blue Back Square and adjacent to the Isham Garage, but owned by the American Legion. The ground floor is currently leased to the Maruichi Japanese Market (Cuvée previously occupied that space) and Post 96 uses the meeting space and restaurant/bar on the second floor. Post 96 has total assets valued at about $2 million, Fradette said.

A letter was sent to members in March informing them about the change in restaurant operations. A membership meeting, attended by about 45-50 people, was held on April 12, Fradette said. While not everyone supported the change, Fradette said he felt that everyone’s opinions were heard.

Fradette thinks some members may be under the misconception that Post 96 is going away. That’s absolutely not true, he said. “It’s still our building, it’s still our post. We are going to take full advantage of our assets and resources to maximize our programs going forward,” Fradette said.

“The American Legion Hayes-Velhage Post 96 is not just a building. It’s a group of people. We can better serve our members with this business profile,” said Fradette.

He’s excited about the arrangement with Ward, and the new menu that will be available to members as well as to the public.

Chef KC Ward grew up in West Hartford and graduated from Conard High School in 1997. He had extensive previous restaurant experience, including as executive chef at Bricco in West Hartford, before he opened Rooster Co. in the center of Newington in Feburary 2015. The restaurant, which “reflects the farm-to-table living with hometown cooking,” has had rave reviews.

Flora will take that concept one step further.

Ward is passionate speaking about his relationships with farmers, including Dale Young at Young Farms in East Granby – one of his primary sources of grains and produce – who has taught him to appreciate why “seasonal” is important. And it’s not just about serving local vegetables or fruits in season, but about serving them at their peak season.

Using the best ingredients, at their peak time, will shape the plant-based menu at Flora Restaurant and Bar. He plans to capitalize on his relationships with local Young and other local farmers.

“There’s a real demand for eating healthy but delicious food,” Ward said. A large portion of the menu will be vegan or vegetarian, but there are also plenty of options for pescatarians as well as those who eat meat. “But it will be ‘viable fauna,'” Ward said. “Something sustainable.”

Rotisserie chicken is the cornerstone of Rooster Co’s menu. Ward uses organic, antibiotic- and pesticide-free chicken, and it’s “an everyday approachable food” that’s also healthy to eat. Other menu items are also organic, the pork comes from pasture-raised pigs, and he knows the sources, knows the people who are providing it.

Ward said that Flora will be a continuation down the path of what he started at Rooster Co., but more focused on what comes out of the ground.

His focus as a chef is combing the right balance of taste and texture. “I will treat the plant-based menu with the same respect.”

About a year ago Ward had looked at another space in the American Legion building – the space where Cuvée was located – but he had a different concept in mind. He said that property manager Mike Mahoney also showed him the American Legion space on the second floor, but the type of restaurant Ward had been thinking about wouldn’t have worked in that space.

Then Rich Bouvier – one of Ward’s business partners (he has several, including his wife Jaime who runs the front of the house) – was talking about the need to eat a healthier plant-based diet, and the idea for Flora, was born.

“West Hartford does not need more of the same,” Ward said. He knows that restaurants have been proliferating in town, with many taking over former retail spaces.

“This is not a change in use. It’s continued use of restaurant space,” he said of the transformation of the American Legion’s bistro to Flora.

Before moving forward, Ward said he discussed the idea with other local chef/owners including Billy Grant and Tyler Anderson. He didn’t want to be competing in their space. Ward said they liked the concept.

The target demographic will be “people who value delicious healthy food for themselves, for their kids, served in an everyday approachable atmosphere.” The restaurant will be right across the street from Whole Foods, which is a natural synergy, Ward said, because those customers already recognize the value of healthy eating.

Flora will have a liquor license, but Ward said he is not looking to attract those who want a “club scene.” He will serve a variety of wines and spirits – many of them organic – with a limited selection of beers as well.

“I’ve designed what I want. I’m an almost 40-something dad who sometimes gets a babysitter and sometimes goes out with the kids.” He said his sister is a vegetarian and he has a brother-in-law who has to have red meat. Flora will have something for everyone.

As for the look of the space, Ward said he plans to keep the woodwork, but soften it a bit with fabric accents. There will be some minor renovations to increase the size of the kitchen.

The pool table will remain but will be moved into the back meeting room. When Post 96 is not using that space, it will serve as a lounge for restaurant patrons. The American Legion memorabilia will remain on the walls, Ward said.

There will be changes to the entrance, and the engaging experience will begin as soon as you walk in the door, before you go upstairs or into the elevator, Ward said. He’s even considering a hydroponic garden and small herb garden for the entryway.

Rooster Co. can accommodate 150, but Flora will be a more intimate space with seats for 50-60, Ward said. It will allow him to spend more time with the dishes. “I can love each plate a little more. I believe in my heart that will strike a chord with people,” he said.

He’s even looking at a device that composts organic waste in 24 hours by a combination of auger, temperature, and humidity. He’d love to be able to offer compost free to diners who come in the next day with their receipt.

Ward said that Rooster Co. has a great management team in place an existing culture of excellence, which will free him up to spend the time at Flora.

“It feels good going back to West Hartford,” said Ward. Although he now lives in Bloomfield, he and his wife (who graduated from Northwest Catholic), and his business partners are all from West Hartford.

“I’m happy to allow the American Legion to focus on what they want to be doing,” Ward said.

“We look forward to being a guest at Flora, to support his business,” said Fradette. “This is going to make us very successful.”

The American flag will continue to fly in front of the building, Fradette said.

Flora’s website is still under construction, but Ward said it will soon be active at floraweha.net. “FloraWeHa” will be the social media handle.