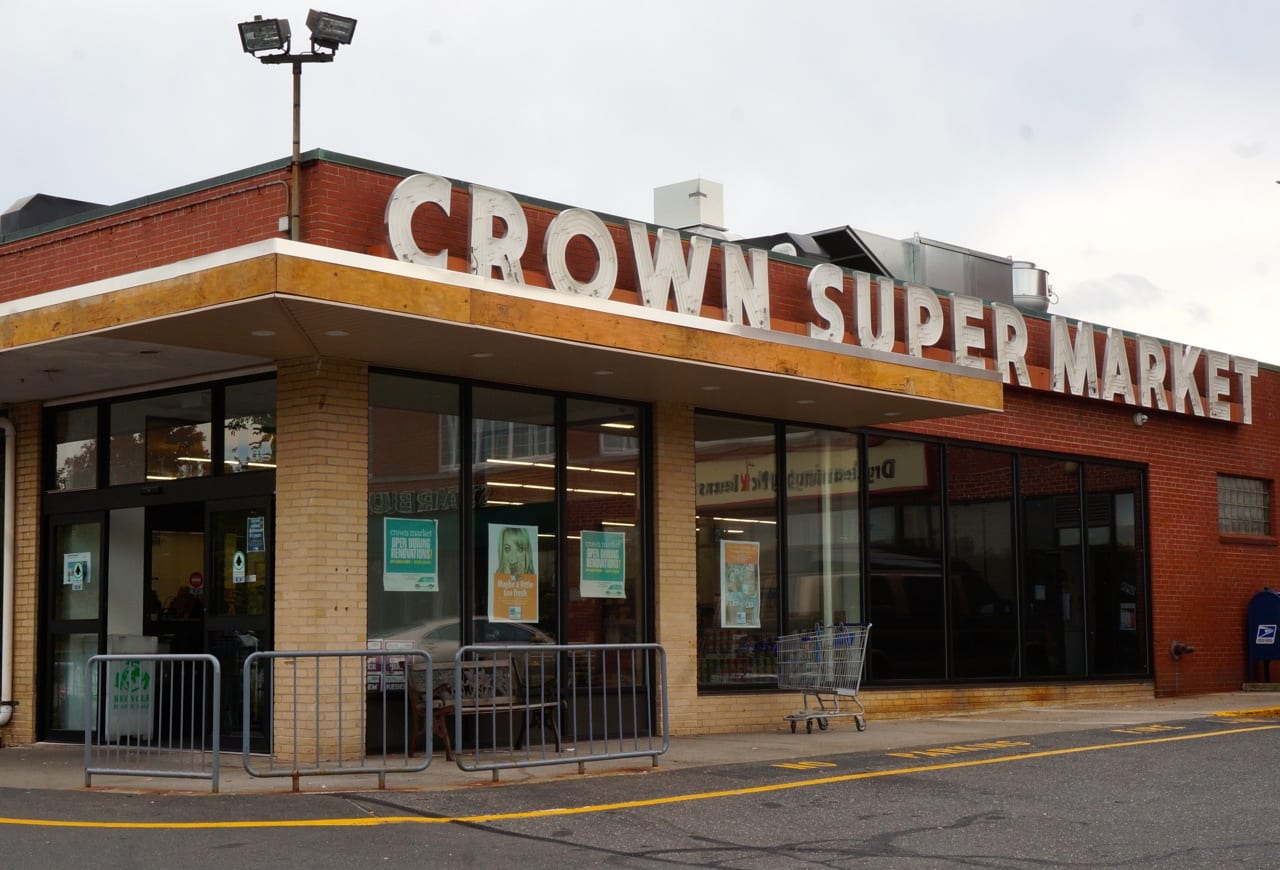 The Crown Super Market sign will remain on the exterior of the building, but blue trim will be added. Photo credit: Ronni Newton

After two years of extensive renovation, Crown Market and Café in West Hartford’s Bishops Corner will soon have a grand reopening. 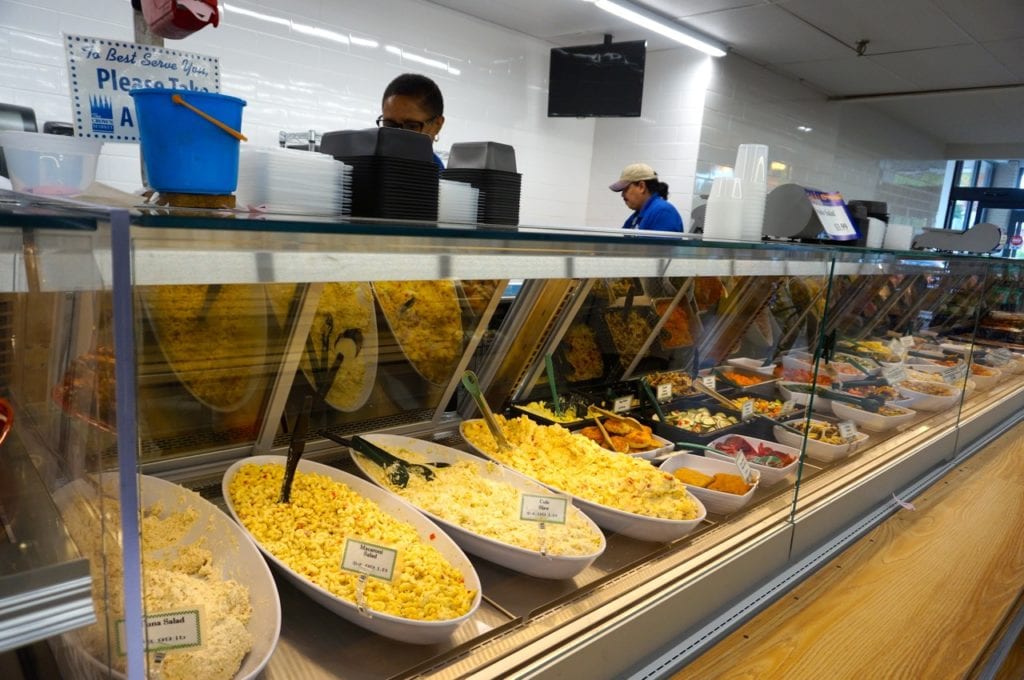 Crown Super Market nearly closed due to financial pressures in early 2014, but after being rescued by a team of investors who promised to modernize the store, renovations to what is now being called Crown Market and Café are nearly complete.

“It never closed,” said philanthropist and businessman Henry Zachs, who along with LAZ Parking CEO Alan Lazowski and CohnReznick partner Brian Newman led the team that purchased Crown from former owner Marc Bokoff. The three now form the executive board of the 76-year-old business.

Zachs credits a dedicated team of people, including former Waldbaum’s President Ken Abrahams, with having the vision to carry through the renovation process while keeping the store open and serving customers. Board members who have also been very involved with the renovation include Ann Pava, Gayle Temkin, David Gelles, Andy Mandell, and Robert Samuels – the former head of First National Stores.

“There’s nothing that’s old other than the dumbwaiter,” Zachs said, and the “Crown Super Market” sign that will continue to grace the exterior of the building that faces Albany Avenue. There are also some of the original lighting fixtures, unearthed in the basement, that have been restored and now hang over what will soon be Crown’s café area.

On a tour of the space, Zachs and Pava, who has been creating the buzz about the renovation on Facebook, pointed out brand new refrigeration units and other mechanical equipment. The equipment in Crown’s three kitchens (meat, dairy, and parve or neutral) is all new, and an energy-efficient “rack” has eliminated about 30 separate compressor units.

New lighting, a new ceiling, and new shelving makes the space appear much larger, but the square footage has not changed. Crown still carries just as many different products, although Pava said that there has been a consolidation of brands for grocery items like paper plates and laundry soap.

If there is demand for an item that has been dropped, however, management wants to know about it. “We listen to our customers, and if it sells we will carry it,” Zachs said.

Modernizing the store turned into a very expensive project, but Zachs said that the team of investors was committed. Pava joked that Zachs “lives here,” but he admitted that he has personally overseen and been involved with nearly every aspect of the project, which was originally estimated to cost $1.5 million. “It was much more than double,” Zachs said. The rack alone cost about $400,000, he said.

Another costly but needed update was new stairwell access from the basement – adding a means of egress that was required by code.

Also upgraded was the level of kosher supervision under which Crown operates. It was formerly supervised under both the Conservative and Orthodox movements, but is now certified as kosher by HKC, the Hartford Kashruth Commission and under the direction of Rabbi Tuvia Brander, Rabbi Yitzchok Adler, and Rabbi Yosef Wolvovsky.

Rabbi Brander said kosher supervision happens on several levels, and a “mashgiach” – Hebrew for “one who watches” – handles the day-to-day supervision at Crown. Deli Manager Michael Klein serves as head mashgiach, and his role includes ensuring that all meat and dairy products brought into the store are already kosher, and that they are kept separate.

Technology, including a new system of color-coding of serving dishes and utensils in the 5 O’Clock Shop, meat department, and deli make it easier for the the mashgiach to supervise.

“Everyone in Connecticut who keeps kosher can now buy food here,” Pava said, and since the change there has already been an expansion of the customer base she said. There are some non-kosher items for sale at Crown, but they are all pre-packaged grocery items. It’s important to maintain the variety, she said, because many customers use Crown as a convenience store.

Pava said that Crown initially planned to discontinue selling produce because they weren’t getting quality product, but customers, who wanted one-stop shopping, were upset. Instead they now plan to upgrade the produce section and sell very high quality product.

More than half of the customers are not Jewish, but many shop at Crown because they love the food. The tuna salad – a Crown staple – continues to have a strong following with all types of customers. For a short time during the renovation it was being made offsite, and people noticed because a different celery shredder was used, Zachs said.

One common customer concern was the restroom’s location in the basement. “The bathroom will be upstairs now,” Pava said. That move is nearly complete.

Pava said that while the two-year renovation process was cumbersome, closing the store even briefly might have been fatal to the business. “People tolerated us,” she said.

Zachs credited Abrahams for his leadership in crafting the plan for renovating the store while keeping it operating, but unfortunately he didn’t live to see it become a reality. Abrahams passed away in March 2015. “At his funeral the doctor said it kept him alive [many more months],” Zachs said.

“No question about it, we are 95 percent completed,” Zachs said. Some remaining updates include installation of new cash registers and opening of the café, where customers will be able to sit and eat prepared foods purchased from anywhere in the store. The hot dog cart will return in the spring.

“We will be having multiple celebrations,” Zachs said, including a grand reopening most likely in November. 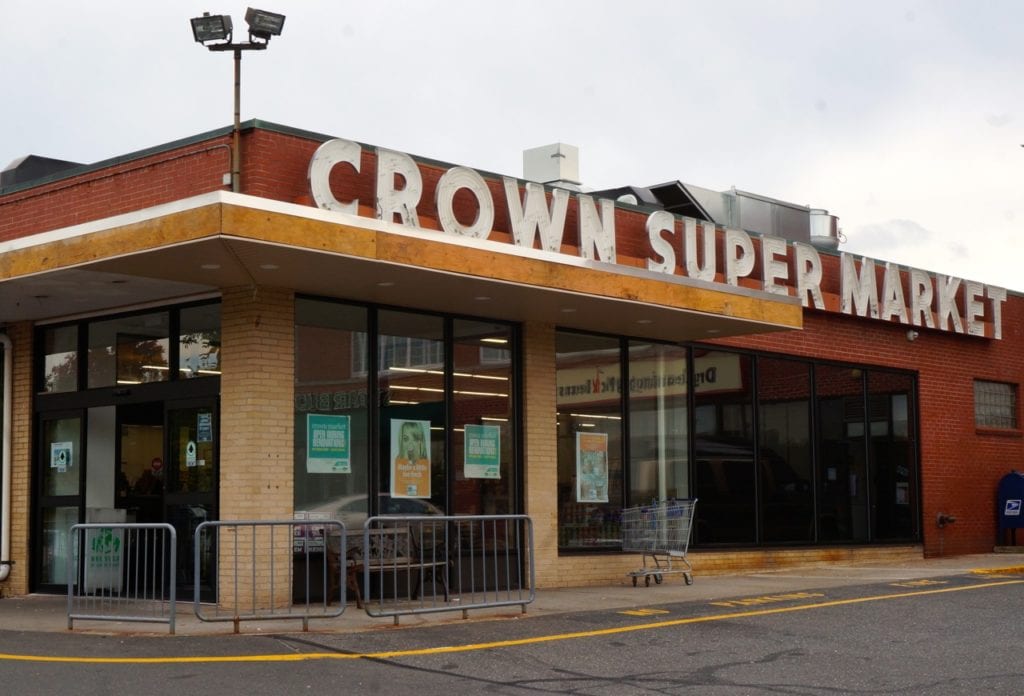 The Crown Super Market sign will remain on the exterior of the building, but blue trim will be added. Photo credit: Ronni Newton 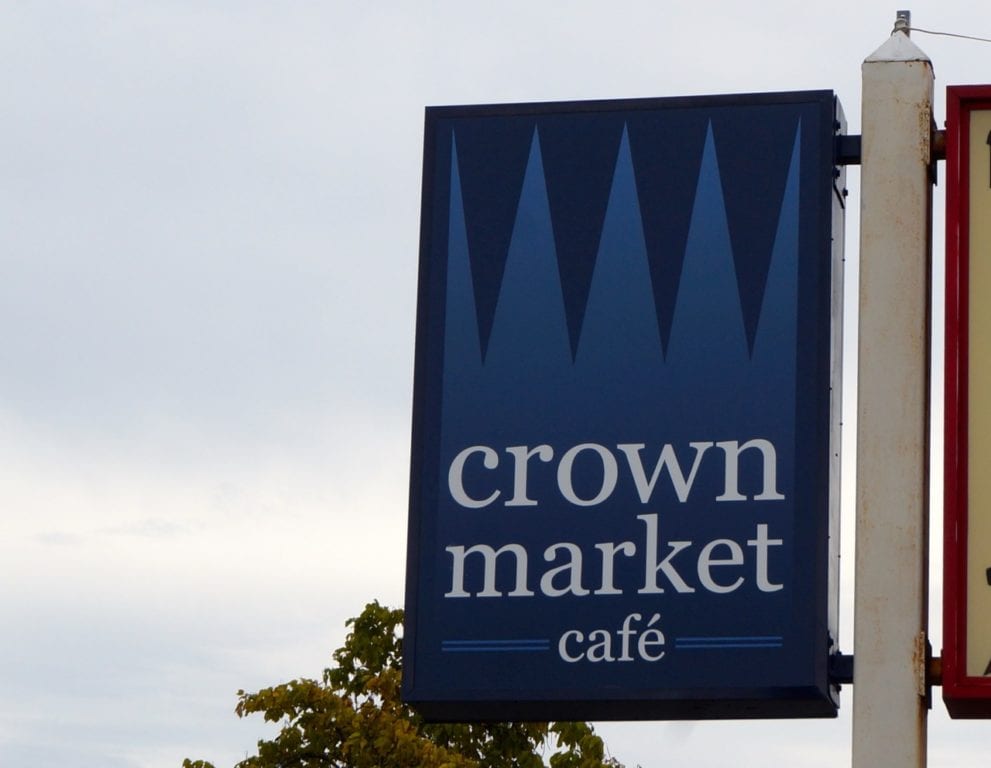 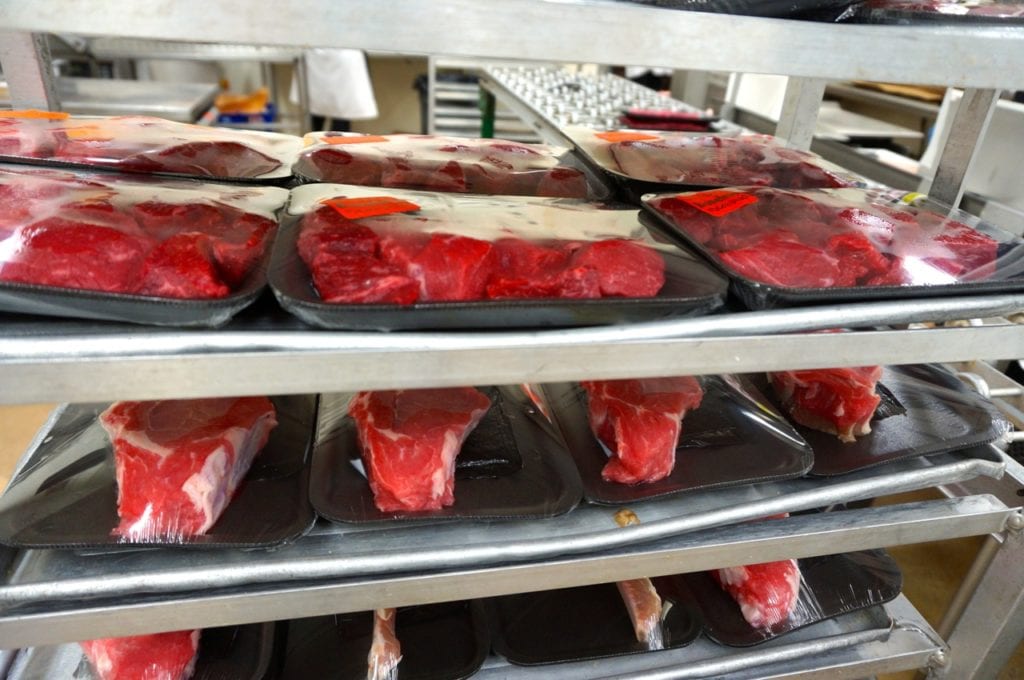 Meat ready to be placed in the cases at Crown Market and Cafe. Photo credit: Ronni Newton 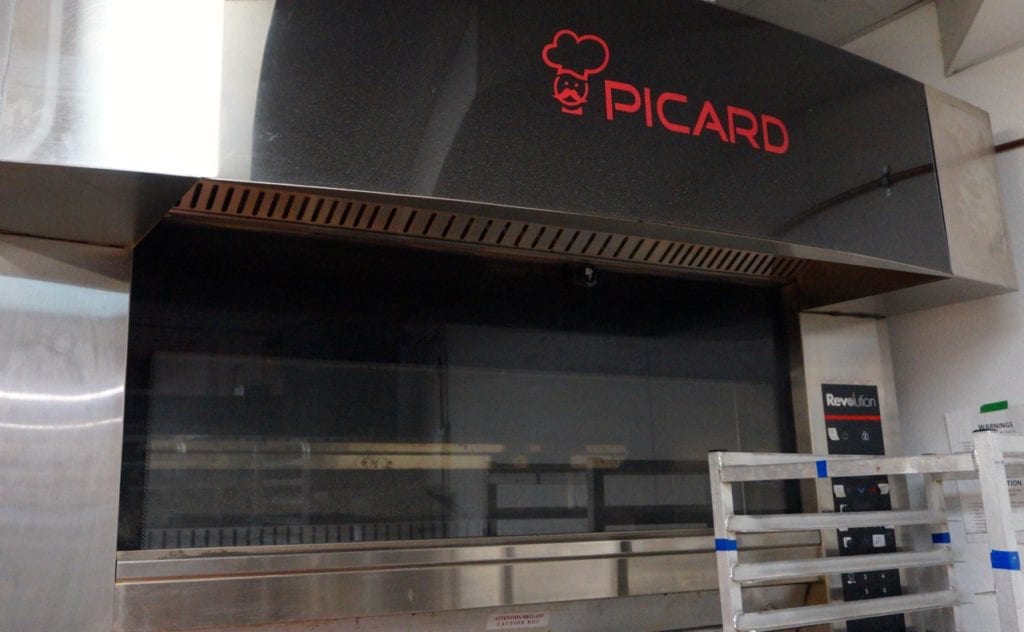 All of the kitchen equipment at Crown Market has been replaced. Photo credit: Ronni Newton 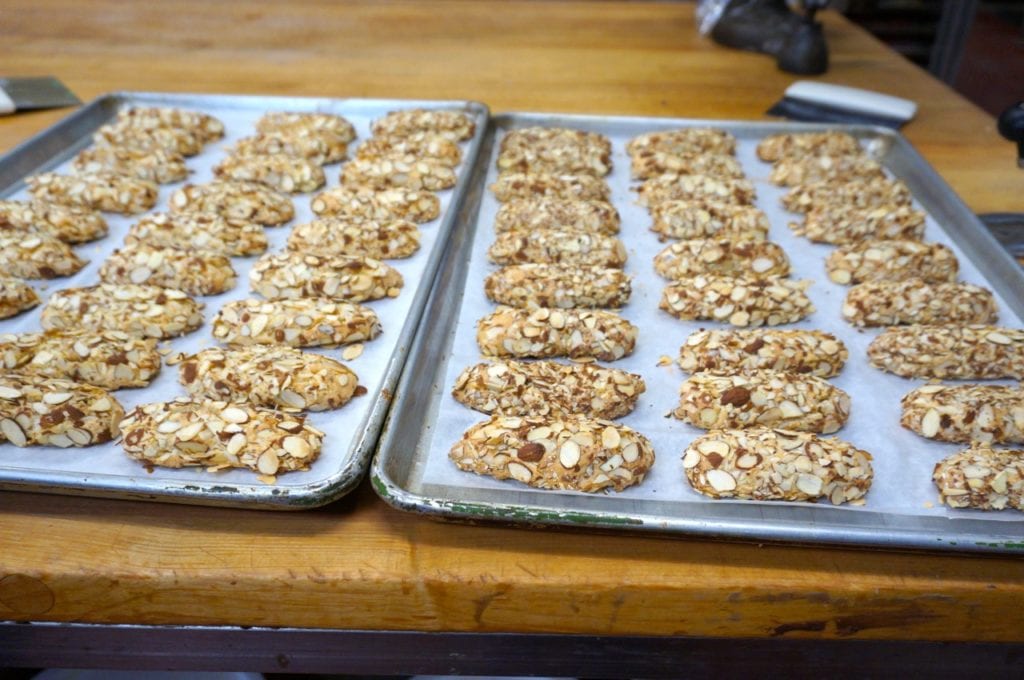 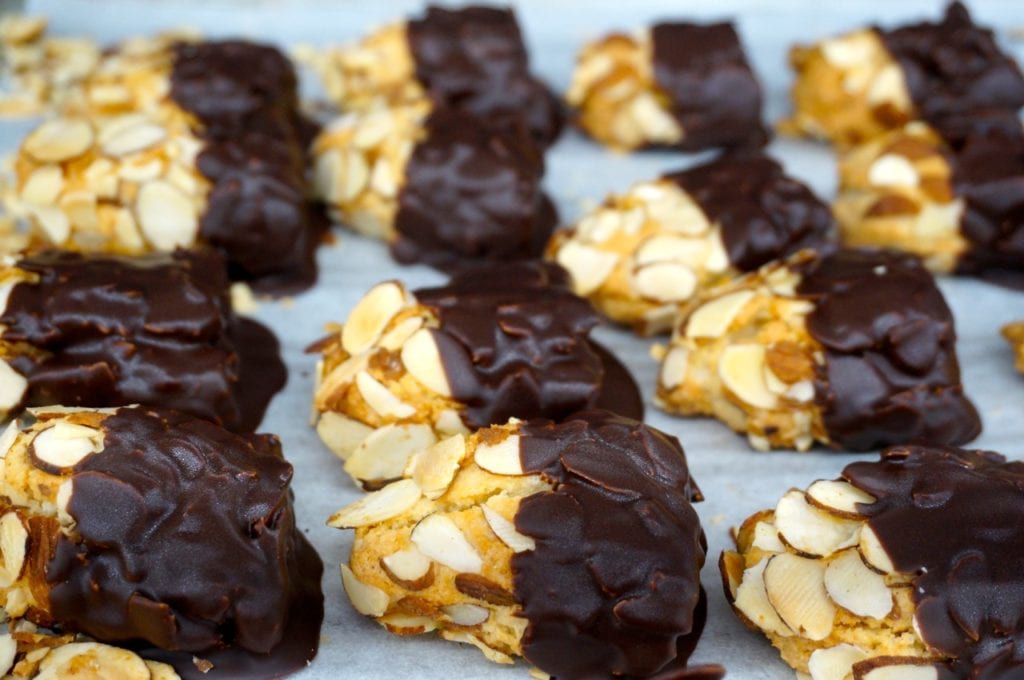 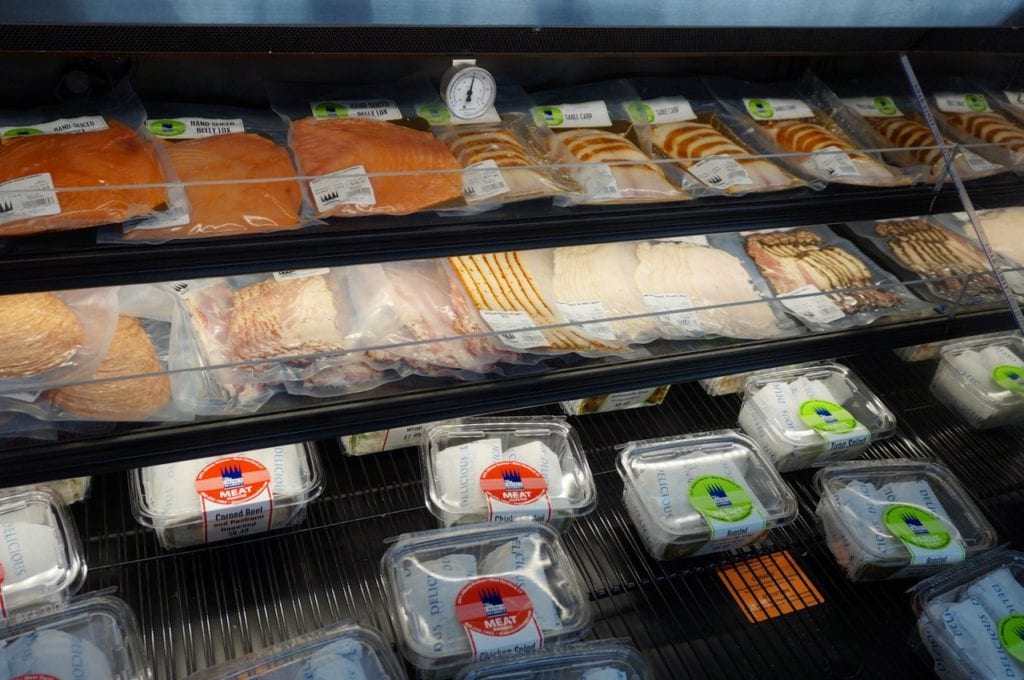 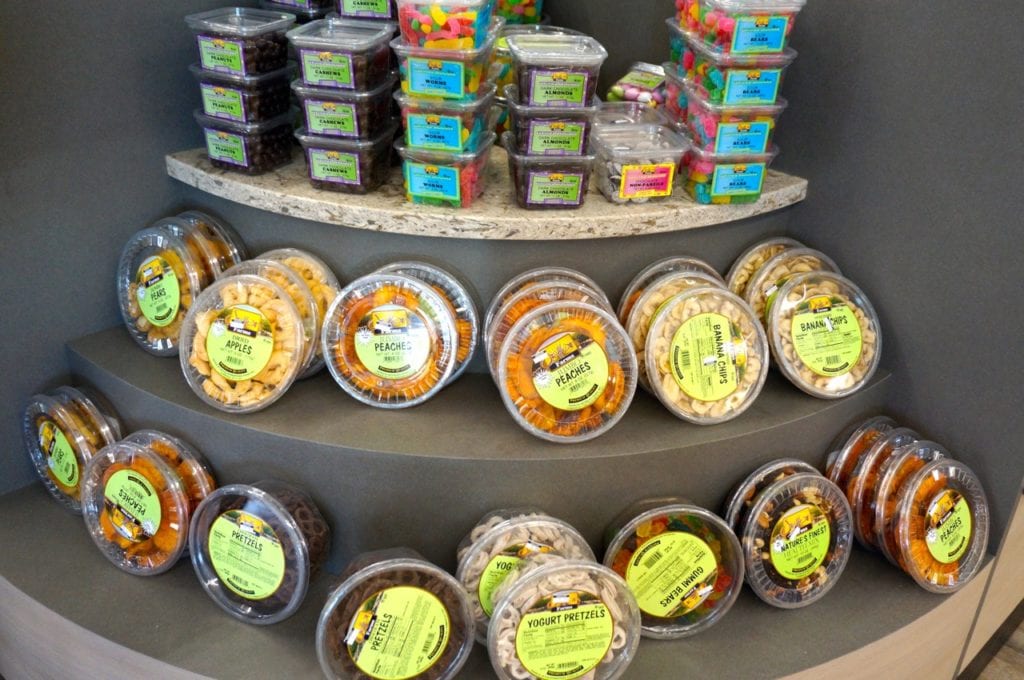 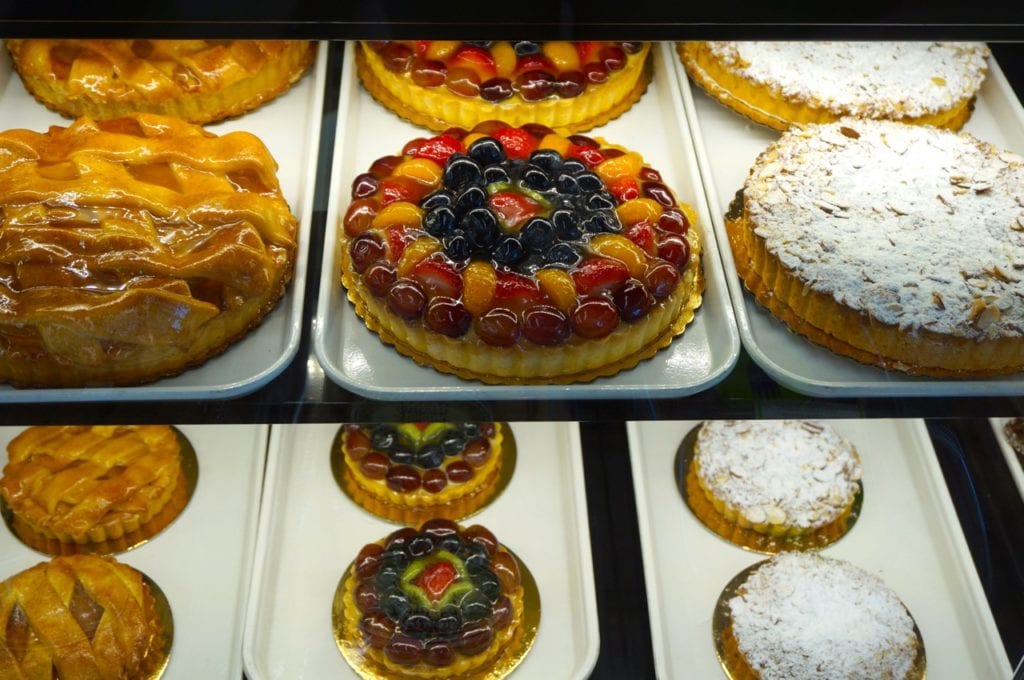 Everything is baked on site at Crown Market. Photo credit: Ronni Newton 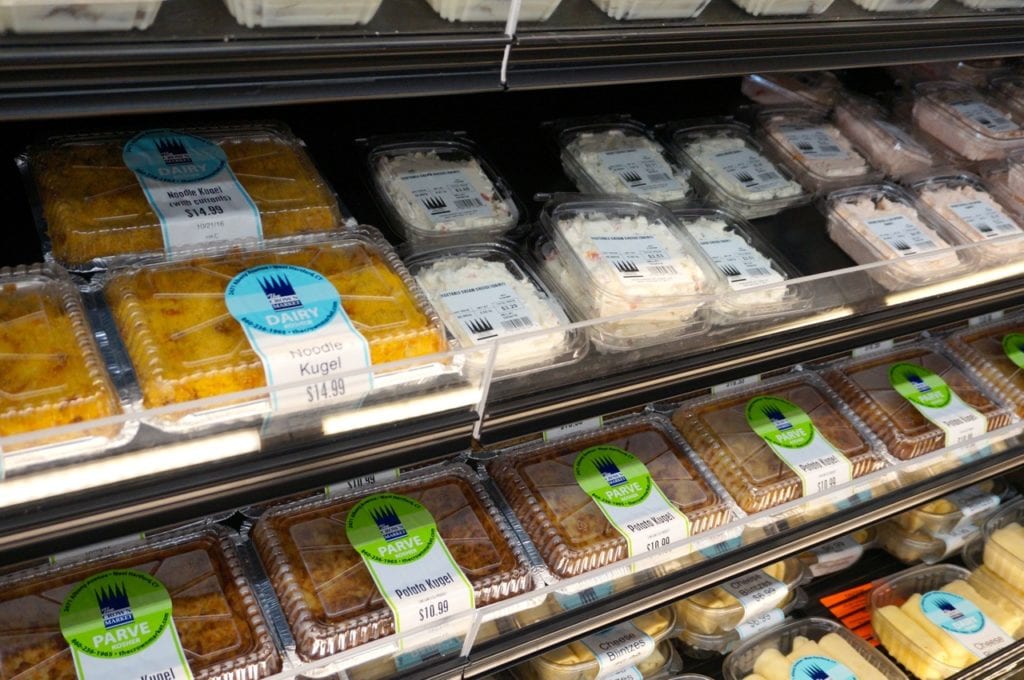 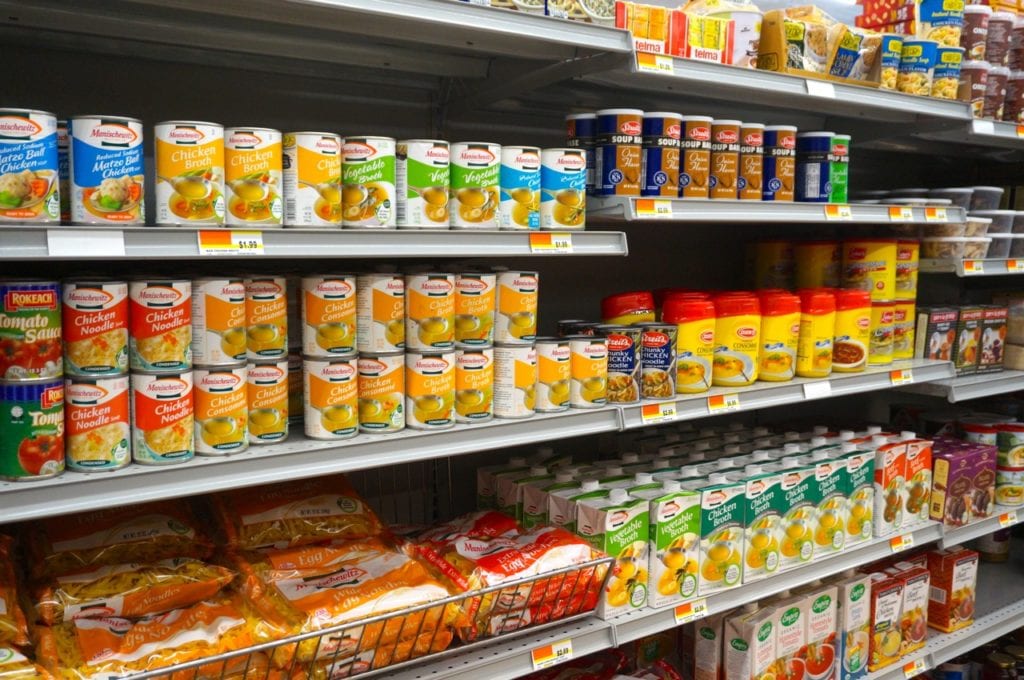 Shelves of grocery products include Israeli foods as well as other staples. Photo credit: Ronni Newton 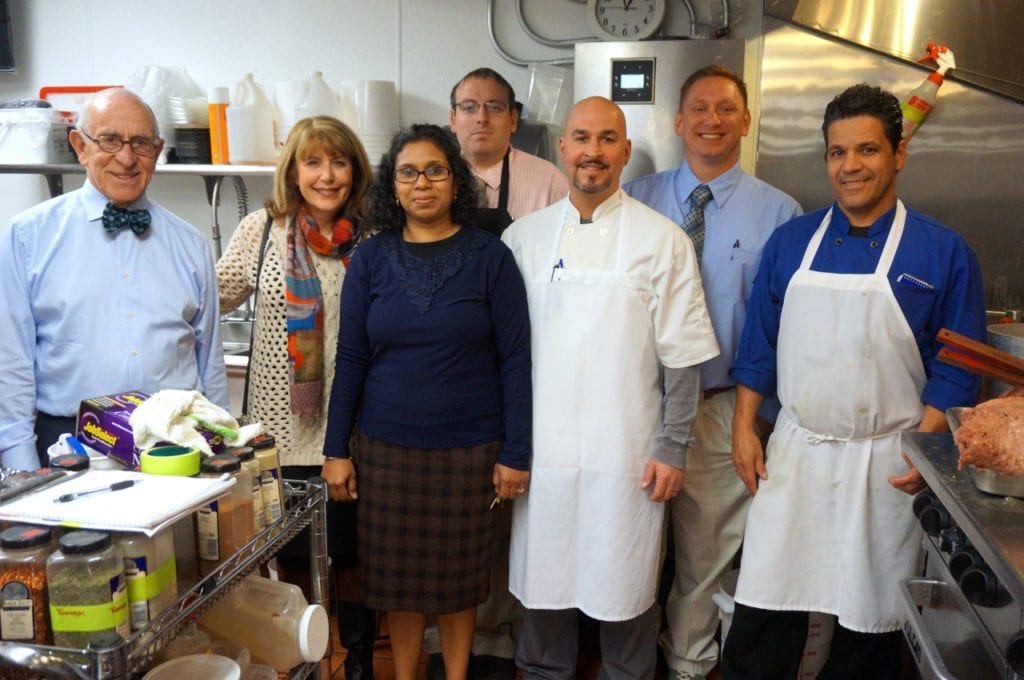 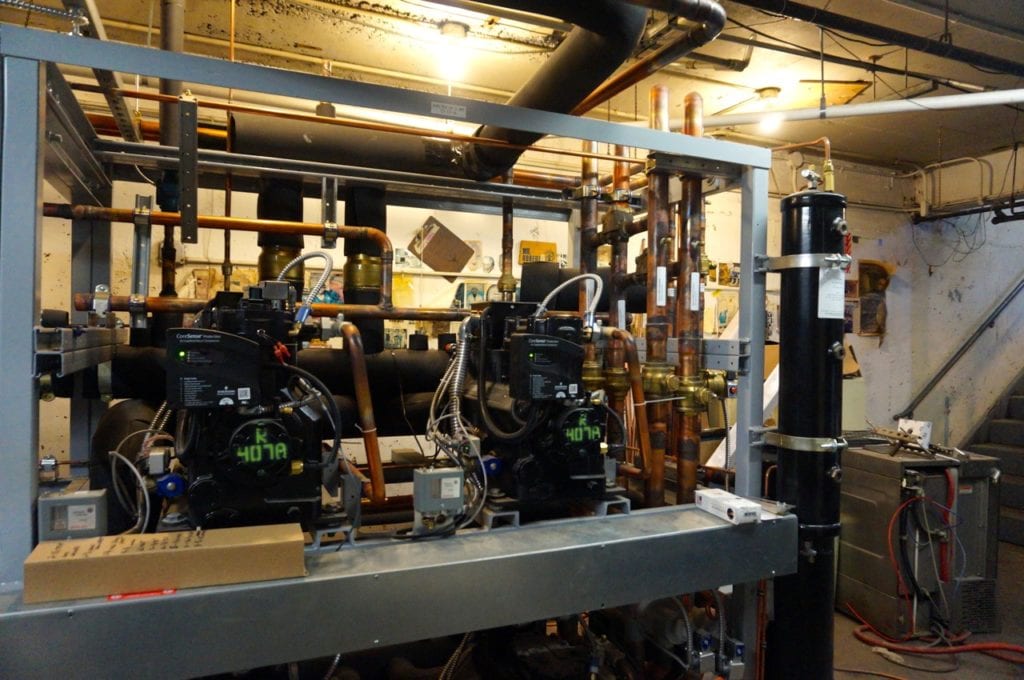 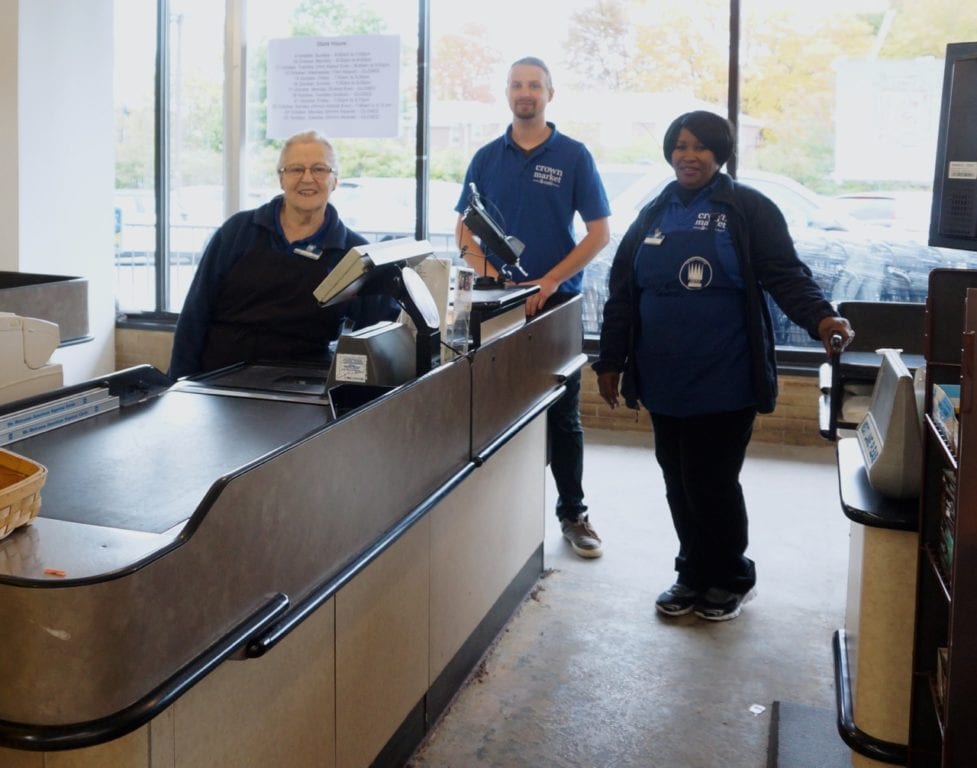 Longtime cashiers who have been on the job throughout the renovation include (from left): Rita Gileau,, Robert Holden, and Suzette Hart. Photo credit: Ronni Newton 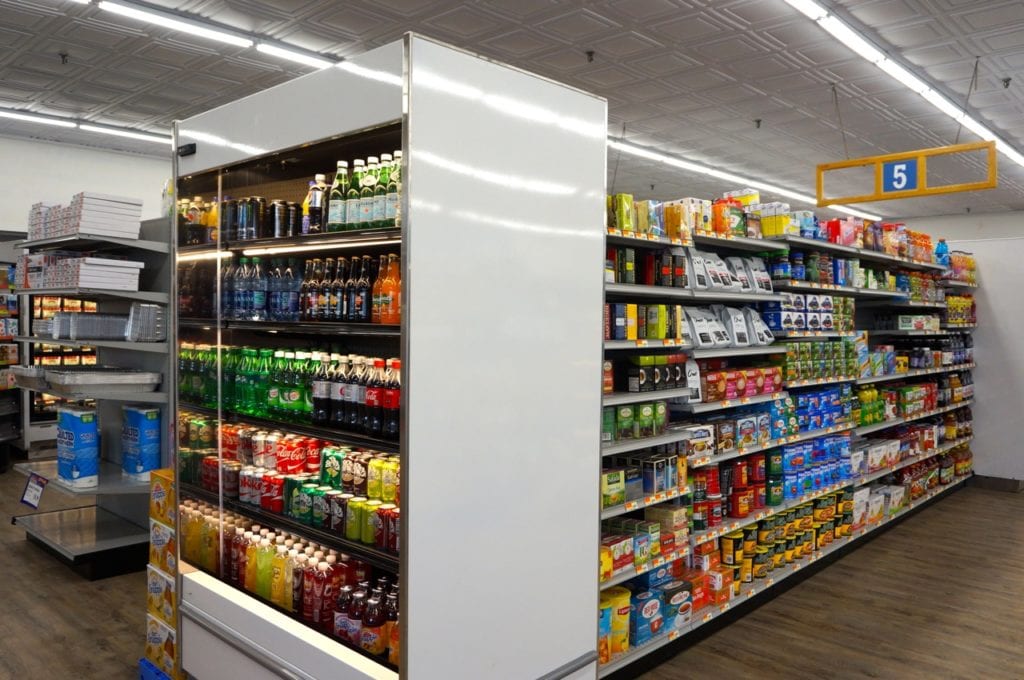 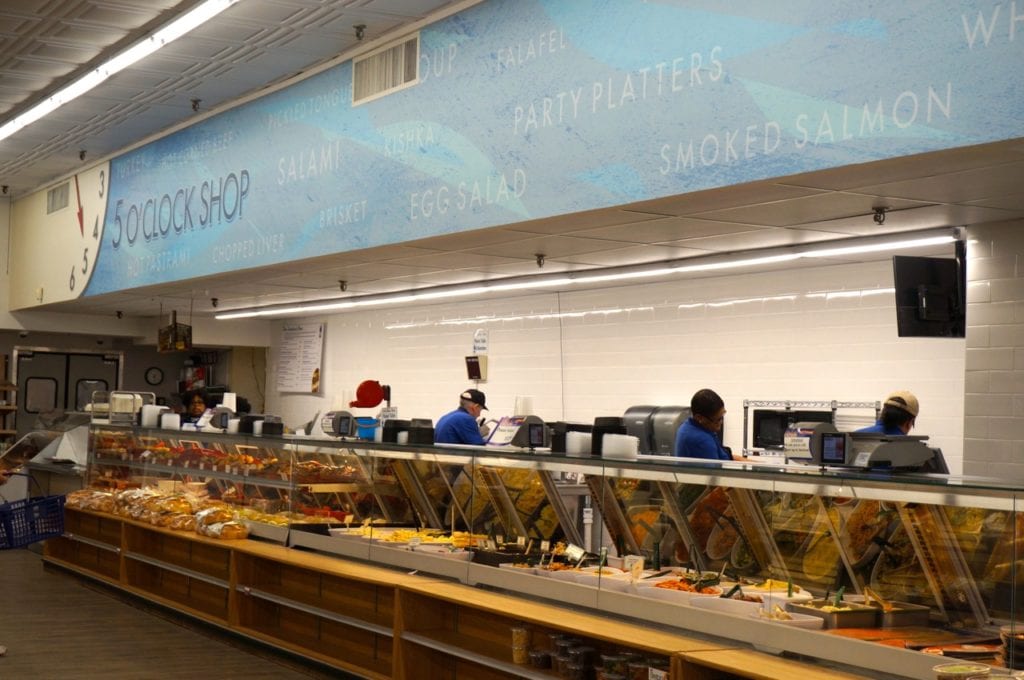 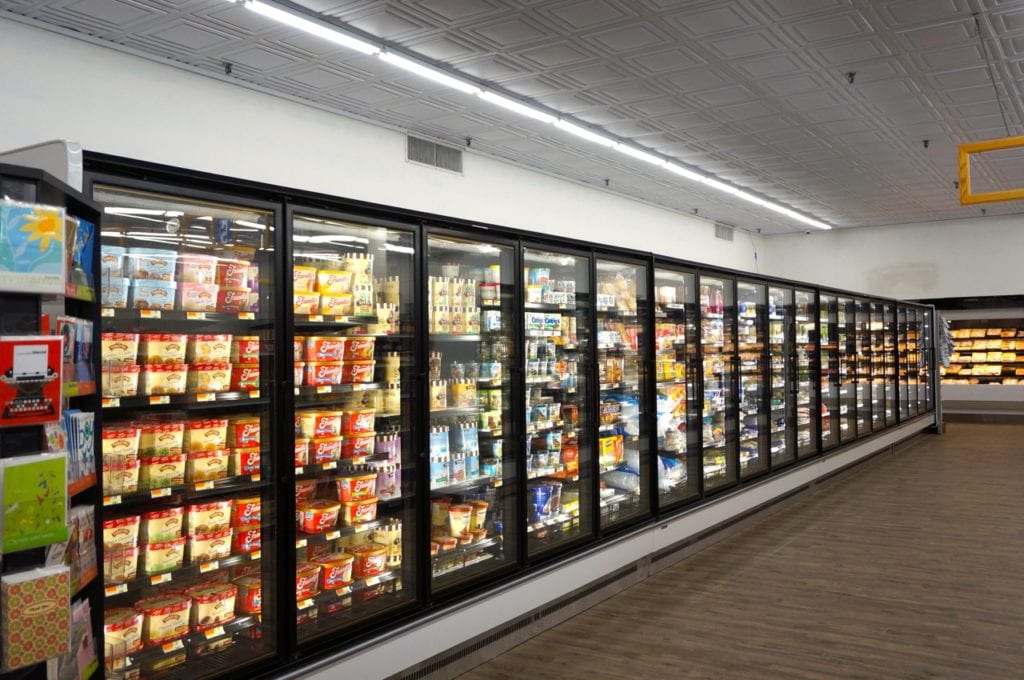 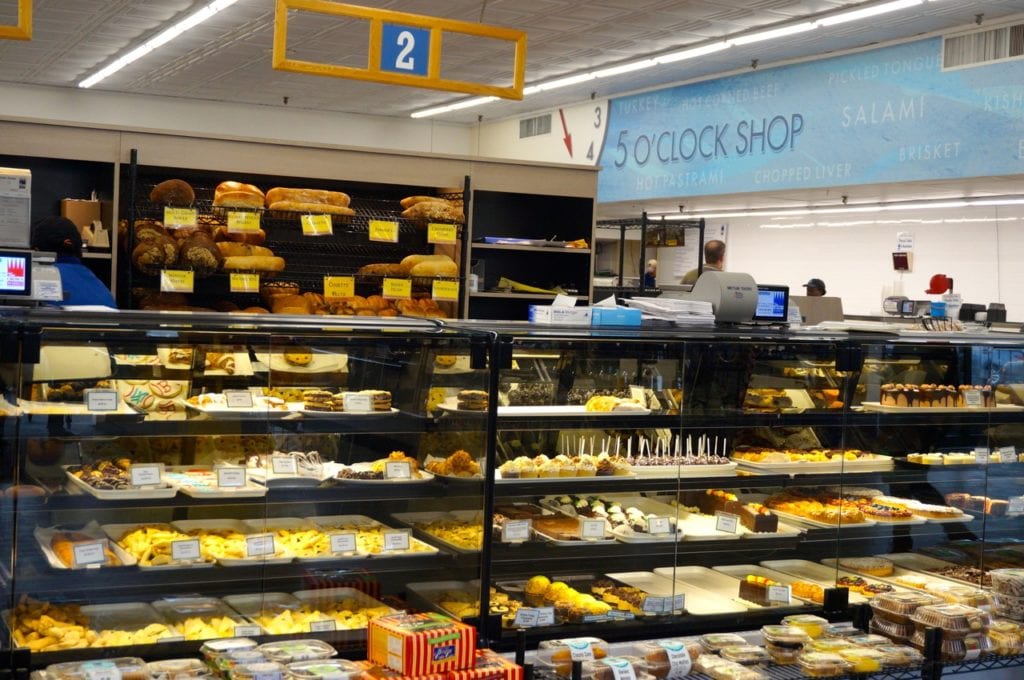