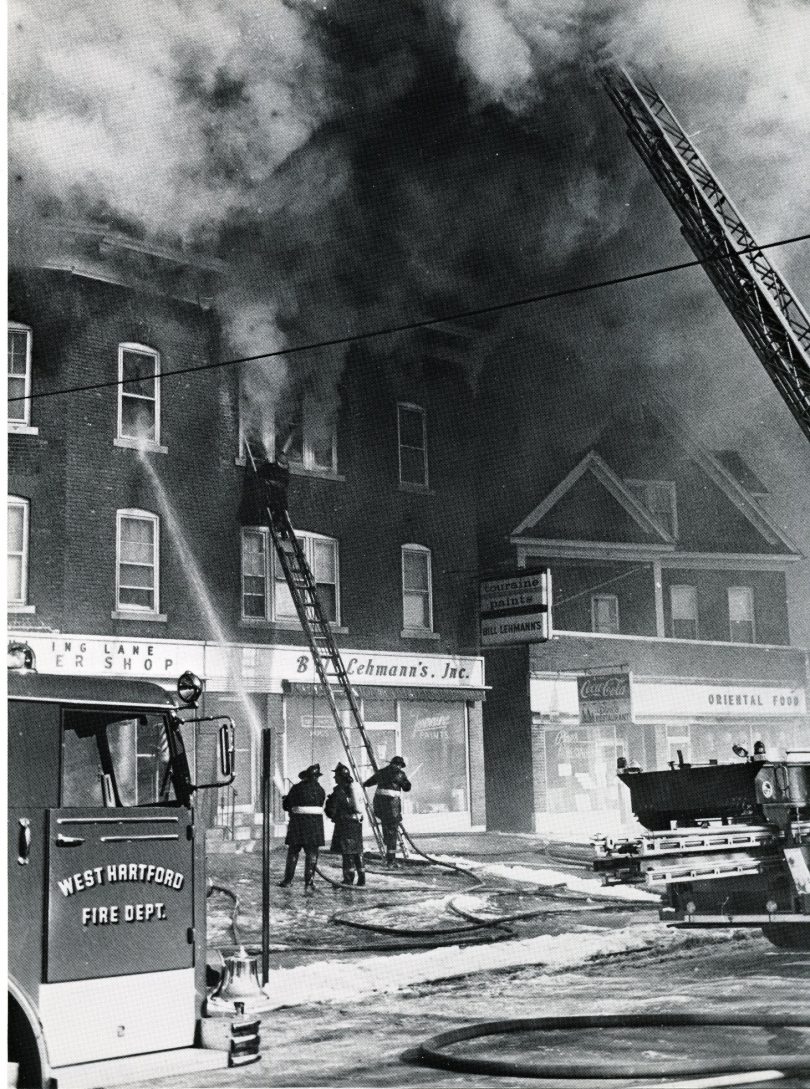 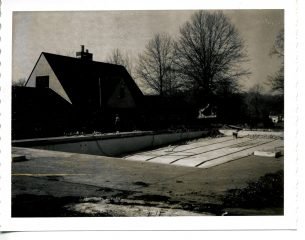 Last week’s photo (at right and in larger size below) is clearly of a pool that has now water in it, but we asked readers which pool it was and when the photo was taken.

Even though it looks different today, most immediately knew the correct answer – that this was Fernridge Pool prior to the latest renovations that made the pool L-shaped.

This photo also prompted a slew of memories from those who enjoyed summers spent at the pool.

“This looks like Fernridge Pool being built,” wrote Mary Schumann, who was the first to comment directly on the column.

Neither Lucien Grillo nor “alf” were sure that this was Fernridge. “I don’t think it’s Fern Park. The pool at Fern park was L shaped and the deep end was away from the building,” Lucien wrote.

However, Derek Pariseault was sure that it was Fernridge: “I believe this is Fern pool and it appears as though the interior is being repaired or it is the beginning stages of the total rebuild of the pool. The lane markings are present so it can’t be a new installation. I have to believe that the pool was being resealed or electrical or filter piping was being repaired. I spent many years at Fern pool, I grew up on Fern Street. Time frame, late fifties.”

There were more clues, and plenty more memories, posted on Facebook.

“Fernridge Park, before they put in the “diving boards end” as an addition. No idea as to the date. A guess; 1958,” commented John Healey. 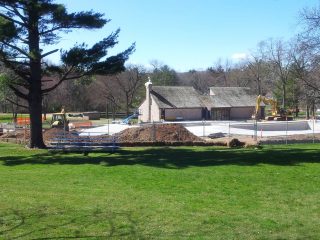 “Looks like Fernridge Park!! Here’s a picture from the latest pool construction [see photo at right, taken in 2012]. If anyone has other photos of Fern Pool, please share with Friends of Fernridge Park, Inc.!!” wrote Rosemary DaCunha.

Bonnie McKenzie thought that the pool was renovated to become L-shaped in the mid- to late-1960s. She said she worked there in the 1970s, and by then the pool was already L-shaped.

There were also dozens of comments on Facebook from readers who fondly remembered participating being part of the swim team at Fern, or just hanging out at the pool with their friends.

Rick Williams commented: “Absolutely, Fern Park pool. Every summer day in the late 1950’s was swim lessons in the morning, followed by baseball, more swimming and tetherball in the afternoon. Wonderful memories of growing-up on Argyle Ave.”

Gayle Winalski wrote: “Definitely Fern Street pool. When we came home to shop for school clothes from Cornfield Point, used to head up there on my bike from Penn Drive. My cousins, Diane and Lois Ann Winalski lived across the street.”

“The bathhouse used to be a weird green color before a nice renovation and expansion,” commented Jonathan Condit

No one could pinpoint the exact date of this photo (and we don’t have the exact date either) but Nancy Law recalled that the pool was closed for renovations in the 1960s. “We rode our bikes down T. Brook from Fern st. Area to Beachland that summer … I’d say 65. I started Jr. High at Plant in 67 and Fern became a wonderful memory.”

Robert Beaulieu said, “still remember so much chlorine in the pool that all lights in the locker room had rainbow halos around them, never mind the pertienent odor of the chlorine!!!!!” Judith Case added, “Everyone had to step into a pan of disinfectant (chlorine?) before going in the pool.”

“I got my toe stuck in the drain in the deep end once thought I would die!!!!!” recalled Ginny Burgess.

“Rode our bikes from Ballard Dr. and Fern, up the hill to the pool, every day of each summer. Bought our daily tickets or registered for our swim lessons in that little green hut, braided lanyards and wove our pot holders at the town craft camp, and met up with all our friends. Fernridge was our summer place for fun!” commented Libby Tulin.

Joanne Foran added, “I lived across the street – Argyle Ave and spent all day every day of the summer at Fern Park- Swimming the allotted twice a day on the family plan, swim team, crafts. Then I worked every summer at the playground, wading pool and cashier on Sat while in college. In winter skating on the pond and sledding. Kids today do not know what they are missing.”

There were many other memories shared, especially in the “You knew you grew up in West Hartford, CT if …” Facebook group, of arts and crafts, of a first kiss, of summers where “swimming” was a good substitute for “bathing.” 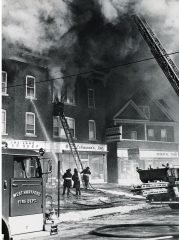 This week’s photo (at right and in larger size below as well as at the top of this column) will probably spur some memories as well, although not the same pleasant ones as Fernridge Pool did. 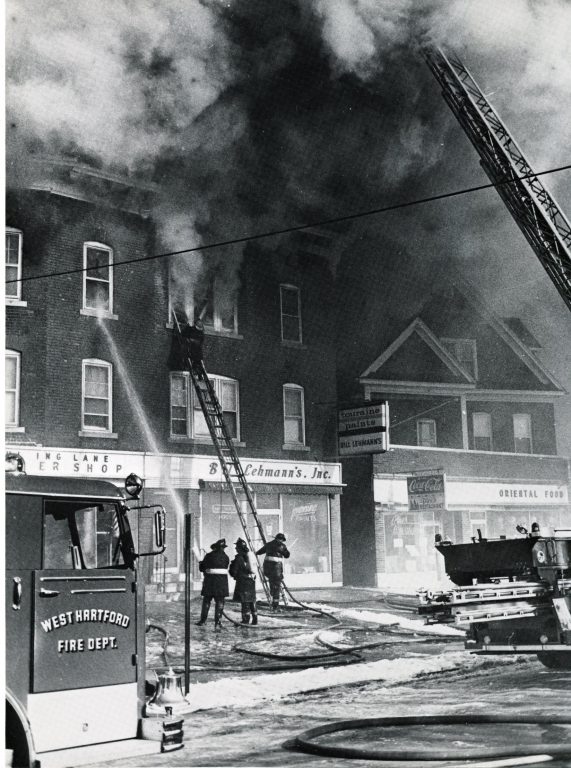 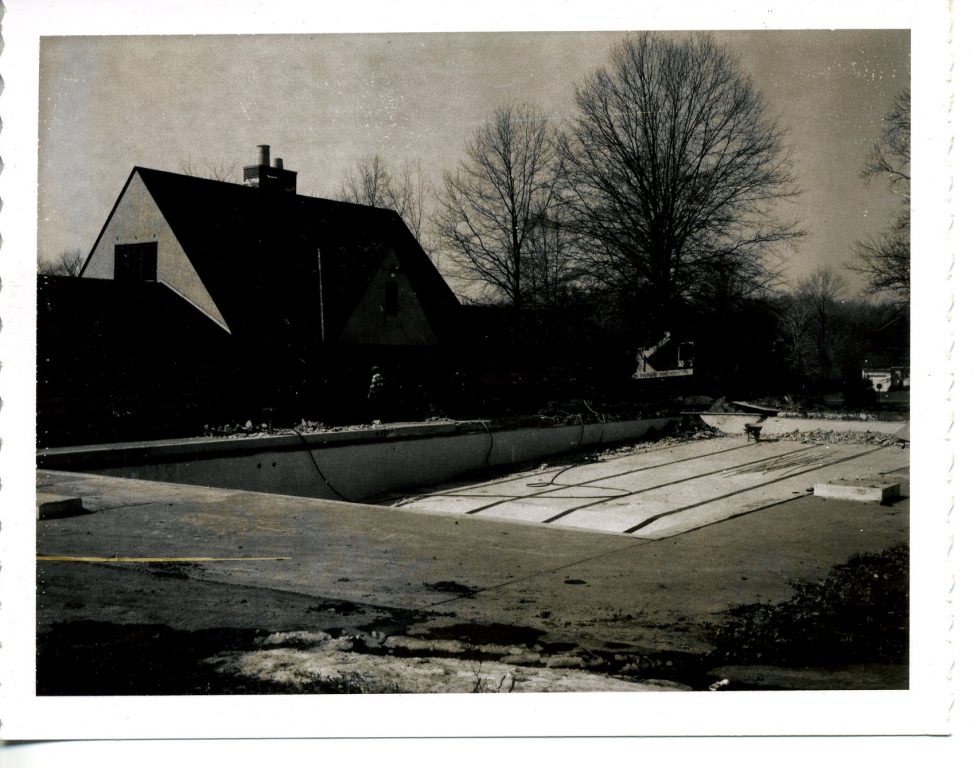