Last week’s photo (at right and in larger size below) stumped a few people, until those who live (or previously lived) in the neighborhood piped in and immediately identified the location. Some even knew what was up with the truck on its side.

“Although I have no idea what is going on with that vehicle, I believe this is Farmington Ave (north side). The second house in gave it away because of the unique front porches,” commented Lucien Grillo right away.

“Corner of Ardmore and Milton Street for sure!” commented “Luci,” with the correct location.

A few days later, Bill Norton added this comment directly to the column: “This is the corner of Ardmore and Milton. The vehicle is an ice truck that has turned over due to shifting ice. There are apartments at this location now.”

Many readers added their comments on Facebook, including Alicia Dawne Aghevil, who shared this memory on the We-Ha.com Facebook page: “Ardmore road and Milton. My childhood house is the second in from the corner.”

Barbara Rowlson also recognized the intersection because the photo included her childhood home, as did Harriet Gold Linder who said she grew up at 77-79 Ardmore.

Giovanni Seccareccia (who suggested using this image so he knew the location and wasn’t guessing) urged some readers to look more closely. Norman Savanella did, and noticed that the sign says Milton, and that the truck appeared to be an ice truck.

John Hogan’s guess that the ice shifted going around the corner is the correct reason for the truck tipping over.

“That’s my street,” commented Bob Maigret. “Corner of Ardmore and Milton roads the 3rd house from the accident was my house where I lived from 67-86.”

Lee Daniels gets extra points for creativity with this comment: “After liquid refreshment some mechanics (with the help of several friends) were known to tip a car on its side to work on it. It seemed like a good idea until sobriety arrived in the morning.”

I also liked Ray Petersen’s comment: “The Iceman Cometh – and tippeth over (with apologies to Eugene O’Neill.)”

There were a few other guesses, including Kingswood Road, Newington Road, and quite a few votes for South Quaker between Boulevard and Farmington, but Milton and Ardmore is correct. And the block of ice, which likely shifted going around the corner and caused the truck to tip, is visible to the right of the truck.

This week’s photo (at right and in larger size below as well as at the top of this column) is particularly appropriate because it’s in a neighborhood that is having an event this week (and we hope to see lots of our readers there)!

Is this business still in West Hartford, and if so, where is it? 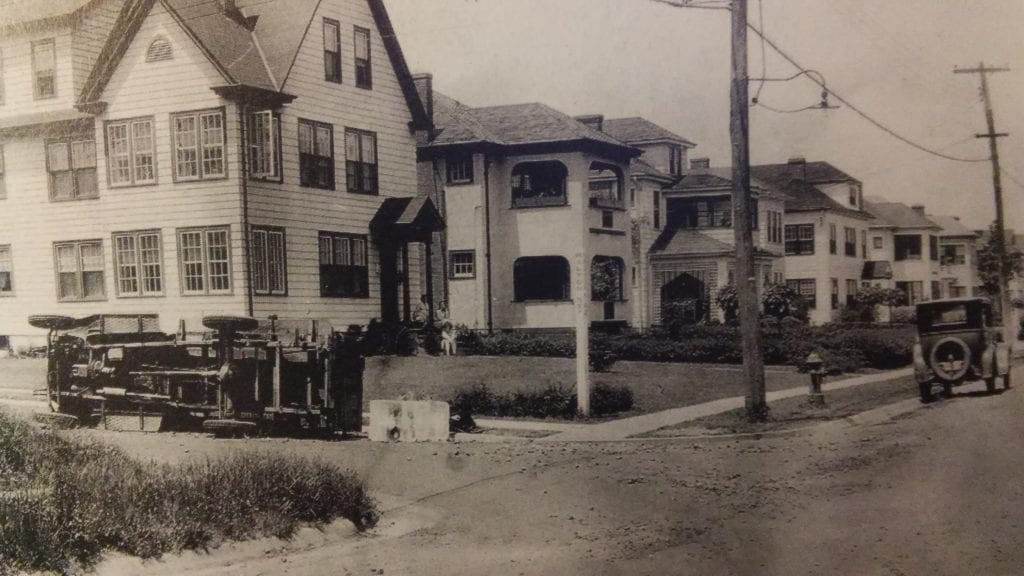