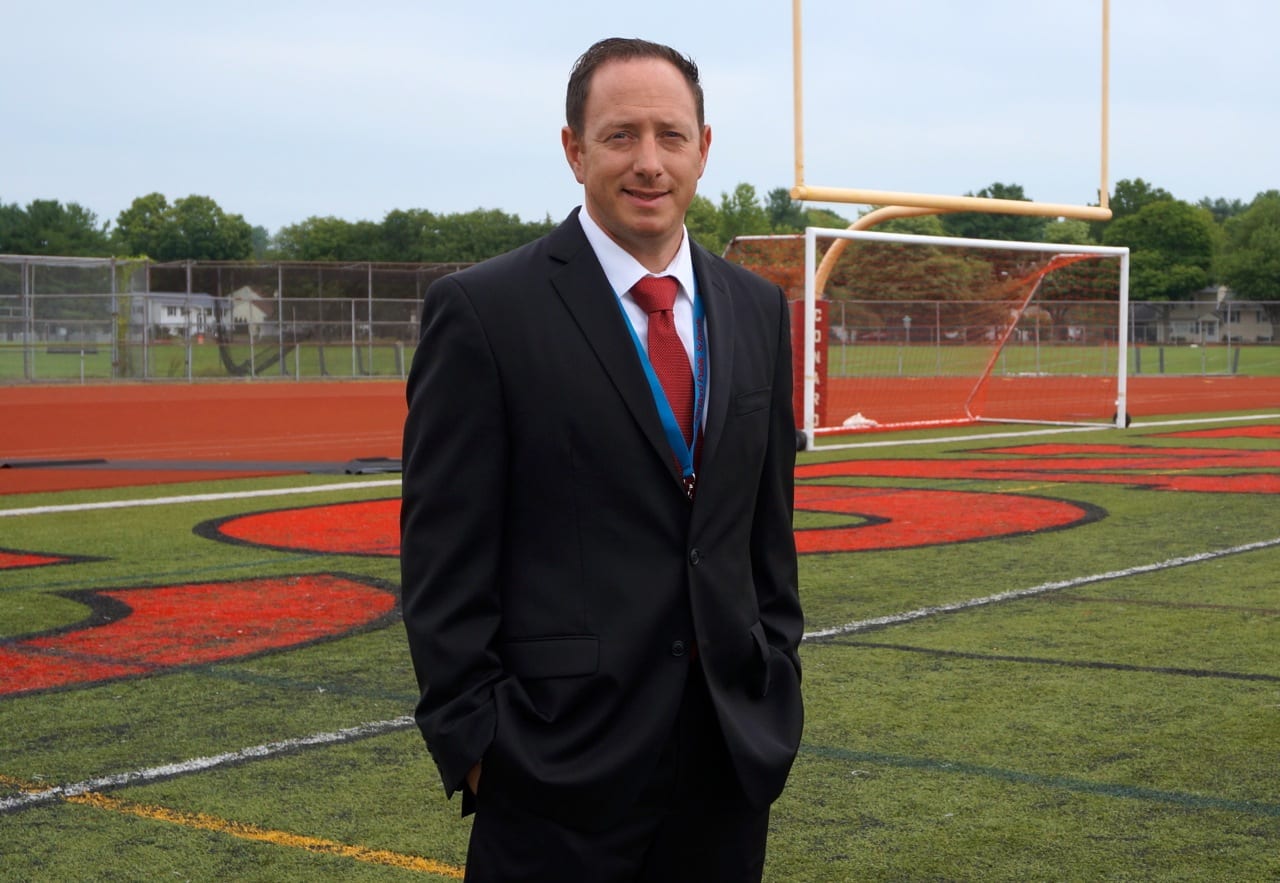 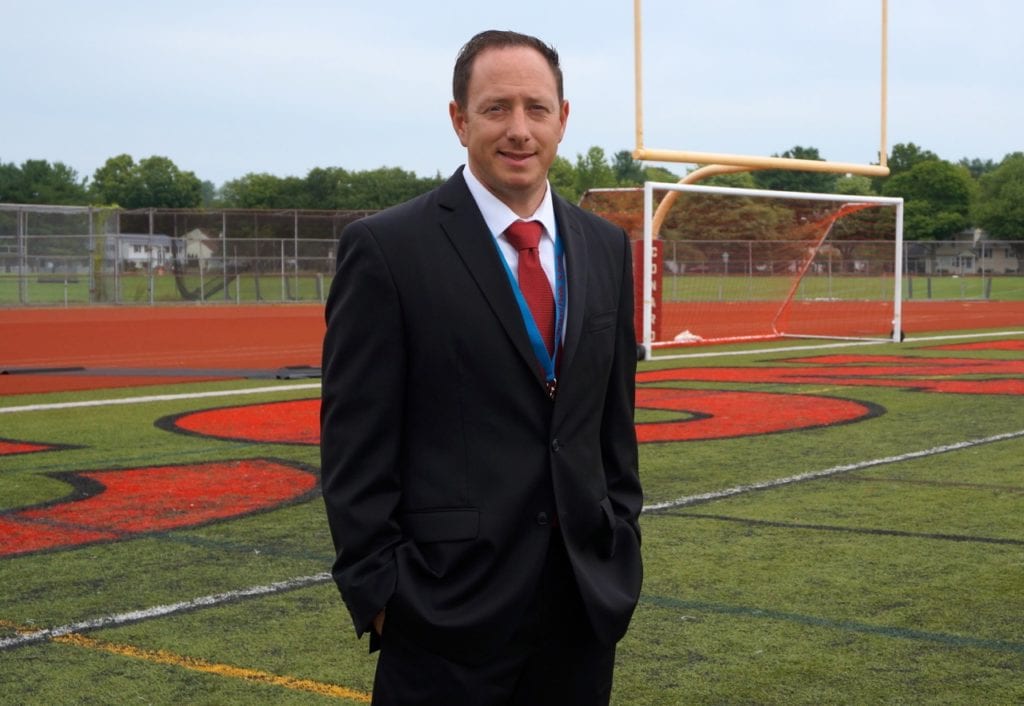 Competition officially begins Sept. 9 for the CIAC’s fall 2016 sports season, but new West Hartford Athletic Director Jason Siegal said he has been in preparation mode since the day back in June that he was offered the position.

“It’s a high-profile district. Parents need to know who is there for the kids,” said Siegal, 35, a lifelong Berlin resident hired to succeed Betty Remigino-Knapp who retired on June 30 after 20 years at the helm of the athletics department for West Hartford’s high schools.

Siegal was employed in a dual role as dean of students and director of athletics at University High School of Science and Engineering (UHSSE) in Hartford where he had worked for 12 years, originally hired as a health and physical education teacher, when he got the West Hartford job. “I immediately began reaching out to people in town,” he said.

That included all 160 head, assistant, and volunteer coaches at Conard and Hall. “I called to say hello. I think building relationships is very important,” Siegal said. He also had a three-hour meeting with Remigino-Knapp to “pick her brain” about West Hartford.

Siegal’s bachelor’s degree is in physical education, and he has a master’s in educational leadership. He has been a high school wrestling and softball coach as well as a teacher. He was instrumental in bringing 17 varsity sports to UHSSE, despite the fact that the school has no athletic facilities, and considers athletics as a key part of the teaching continuum.

His role as dean of students was also great preparation for the West Hartford position, Siegal said. “I had to be out there and be visible,” he said. Relationship-building was very important, and he considers getting to know parents an important part of the athletic director job, too.

Football practice began at both Conard and Hall in the middle of August, with other sports kicking off the week before school began, and Siegal said he has been meeting with teams, and tried to attend as many of the teams’ preseason meetings with parents as he could. He wants to be sure that all are aware of his role, as well as his expectations.

“My role is similar to the coaches. I’m here to support the kids, to let them know that I’m an advocate for them and to ensure that they have a a positive experience,” said Siegal. “High school athletics provide an opportunity to continue education for student-athletes outside the four walls of the classroom.”

What Siegal said he expects is commitment, and good decisions. “When kids become student-athletes they’re making a commitment to themselves, their families, the team, and the school,” he said.

He said he has high standards for behavior, and expects good decision-making to take place when the kids are at home as well. “The standards go beyond X’s and O’s, and I expect the coaches will hold them to high standards,” too. He is hopeful that at the end of the season, the team rosters will contain most of the same names as started off the season.

Siegal also believes that the role of team captain is important, and said he was looking forward to meeting with all captains. He said his message will be: “You were selected for a reason, so demonstrate good leadership qualities and make good choices.” Captains are in the limelight, and the younger students look up to them, so it’s critically important that they set the tone, Siegal said.

Several unique challenges present themselves to being athletic director in West Hartford – most visibly that there are two high schools with different team colors.

This interview took place at Conard, and Siegal was sporting a red tie. He planned to be at Hall the next day, and had a blue tie at the ready.

“I told my wife I need to go out and buy purple,” Siegal joked. He said that one day over the summer he was at Hall but had to leave to attend something at Conard. He changed clothes in his office and made a beeline for his car, successfully eluding anyone who saw him in Conard red on the Hall campus.

Part of the intense rivalry between the two high schools includes the student fan groups, which have sparked some controversy during the past year. The Conard group is calling itself the “The C Section” and Hall is the “Blue Reign” this year. Siegal said he will be in close contact with both high school principals and will also meet with the student leaders of each group to find out their vision for the groups.

“Students should support their peers, not focus on negatively impacting the opposing group,” Siegal said.

“There are two high schools, but there is one West Hartford,” Siegal said. When there’s negative publicity, it’s reflected back on the town, and he said it all goes back to good decision making. “I want [these groups] to exist but if it can’t be done positively, I don’t think there’s a place for that.”

One clear advantage to having two high schools is that it gives more students the opportunity to participate on teams. Siegal said that while it may dilute the talent, high school sports are about much more than championship banners. “Winning is fun, but in high school athletics winning can’t, and shouldn’t, be everything.” Learning to handle loss is also an important lesson, Siegal said.

Siegal said that his message to coaches is to give the kids great experiences. “It’s not what’s in the win/loss column, but what we are doing to prepare students to learn to be successful. I don’t view success by banners.”

He understands that he’s dealing with teenagers, who are in the midst of learning many lessons. He has a teen of his own – a daughter who has just started her freshman year at Bacon Academy – and he and his wife are expecting a baby girl in December, on day two of winter sports, he said.