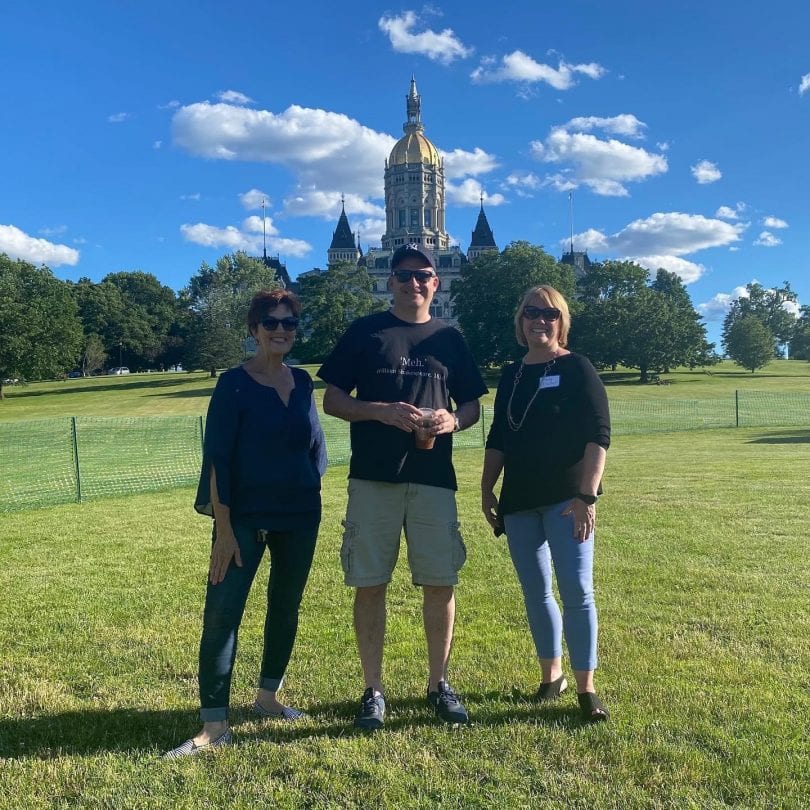 Playhouse on Park will welcome audiences back to the West Hartford theater for season 13, beginning this September.

Playhouse on Park, managed under the direction of Playhouse Theatre Group, Inc., is West Hartford’s own renowned professional theatre, and the 2021-22 productions will mark the organization’s 13th Main Stage season.

Tracy Flater, Playhouse on Park’s co-founder and executive director, is looking forward to Season 13: “I am filled with joy as we make preparations to welcome audiences back into our space for the 2021-22 Season at Playhouse on Park! My partners and Co-Artistic Directors Sean Harris and Darlene Zoller have filled our 13th season with productions that will take you on a journey around the world! We will travel to Afghanistan, England, Las Vegas, back in time to the Roman Empire, the 1800s and 1930s, all while entertaining you with stories of hope. Our patrons have been amazingly supportive throughout the pandemic, and we absolutely would not be here today without them.”

The 2021-22 Season will open with TWO JEWS WALK INTO A WAR … by Seth Rozin. Ishaq and Zeblyan are the last remaining Jews in Afghanistan. They share the only remaining synagogue that has not been destroyed by the Taliban. They share a mission to repopulate the Jewish community in Kabul. But they also hate each other. Can this Middle Eastern odd couple commit to one incredible act of faith to keep the diaspora alive without killing one other? A modern vaudeville full of schtick, sorrow, and survival. TWO JEWS WALK INTO A WAR runs Sept. 22 – Oct. 8, 2021.

Running Dec. 1-19, 2021 is Lauren Gunderson and Margot Melcon’s MISS BENNET: CHRISTMAS AT PEMBERLEY. A sequel to Jane Austen’s Pride and Prejudice set two years after the novel ends, MISS BENNET continues the story, only this time with bookish middle-sister Mary as its unlikely heroine. Mary is growing tired of her role as dutiful middle sister in the face of her siblings’ romantic escapades. When the family gathers for Christmas at Pemberley, an unexpected guest sparks Mary’s hopes for independence, an intellectual match, and possibly even love.

FIVE GUYS NAMED MOE (book by Clarke Peters, with music and lyrics by Louis Jordan) is the third show in Playhouse on Park’s 13th Main Stage Season. An exuberant tribute to the music of rhythm and blues pioneer and alto saxophonist, Louis Jordan, Five Guys Named Moe is an international sensation. Initially produced in London’s West End by the legendary Cameron Mackintosh, this exhilarating, all-embracing theatrical experience moved to Broadway in 1992 and was nominated for two Tony Awards. Running Jan. 26-Feb. 27, 2022.

Next up is stop/time dance theater’s DIVAS: DOUBLE OR NOTHING. stop/time dance theater is Playhouse on Park’s resident dance company, created, directed and choreographed by Darlene Zoller. You may add to your subscription at a 20% discount! DIVAS: DOUBLE OR NOTHING is an original show featuring 17 outstanding company members who will sing, lip sync, and dance their way into your heart while paying homage to all of your favorites: Cher, Tina, Gloria, Shania, Dolly, Whitney and more with a mix of tap, jazz, swing and funk. This will be a non-stop, high-energy production certain to send you home with a smile on your face. DIVAS: DOUBLE OR NOTHING will run March 16-27, 2022.

THE AGITATORS by Mat Smart is the next Main Stage production, and it will run May 25-June 12, 2022. The Agitators tells of the enduring but tempestuous friendship of Susan B. Anthony and Frederick Douglass. Great allies? Yes. And at times, great adversaries. Young abolitionists when they met in Rochester in the 1840s, they were full of hopes, dreams, and a common purpose. As they grew to become the cultural icons we know today, their movements collided and their friendship was severely tested. This is the story of that forty-five-year friendship – from its beginning in Rochester, through a civil war, and to the highest halls of government. They agitated the nation, they agitated each other, and, in doing so, they helped shape the Constitution and the course of American history.

The 2021-22 Main Stage Season will close with PIPPIN (book by Roger O. Hirson, with music and lyrics by Stephen Schwartz. PIPPIN will run July 6-Aug. 21, 2022. Heir to the Frankish throne, the young prince Pippin is in search of the secret to true happiness and fulfillment. He seeks it in the glories of the battlefield, the temptations of the flesh and the intrigues of political power (after disposing of his father, King Charlemagne the Great). In the end, though, Pippin finds that happiness lies not in extraordinary endeavors, but rather in the unextraordinary moments that happen every day. Directed by Sean Harris and Darlene Zoller.

The first show in Playhouse on Park’s Theatre for Young Audiences series is THE AMAZING ADVENTURES OF DR. WONDERFUL (AND HER DOG!) Public performances will run Oct. 30-Nov. 7, 2021. Ask about the Literature Alive field trip program! It’s a Mystery Science Musical for Young Audiences! Fly through the solar system with Dr. Wonderful and her amazing adventure team of Newton (the dog), Ben (the human), and Mom (the Mom)! Girl-detective-noir meets science-geek-chic in this super cool astronomical musical theater event that will take you across the universe with fun, flair, and science. Written by Lauren Gunderson (Playhouse‘s critically acclaimed Season 10 play THE REVOLUTIONISTS). Book and lyrics by Lauren Gunderson, with music by Brian Lowdermilk. Darlene Zoller will choreograph and direct, with music direction by Melanie Guerin.

Next up in the Theatre for Young Audiences series is the world premiere of DANDELION, adapted from the children’s book by Don Freeman. This musical tells the story of Dandelion. He is a shy, awkward lion, filled with middle school angst. When he gets invited to Jennifer Giraffe’s impromptu party, Dandelion decides to re-invent himself. He ultimately discovers that it’s better just to be yourself! In addition to the theme of staying true to who you are, the musical explores the issues of bullying and social exclusion. Book and lyrics by Joan Ross Sorkin, with music by Mary Liz McNamara. DANDELION will run April 23-May 1, 2022.

All Season 13 productions will take place at Playhouse on Park in West Hartford, CT. Five-show subscriptions are currently on sale, with the option to add stop/time dance theater for 20% off! Playhouse on Park patrons choose to subscribe because it secures the same performance day and seats for each production.