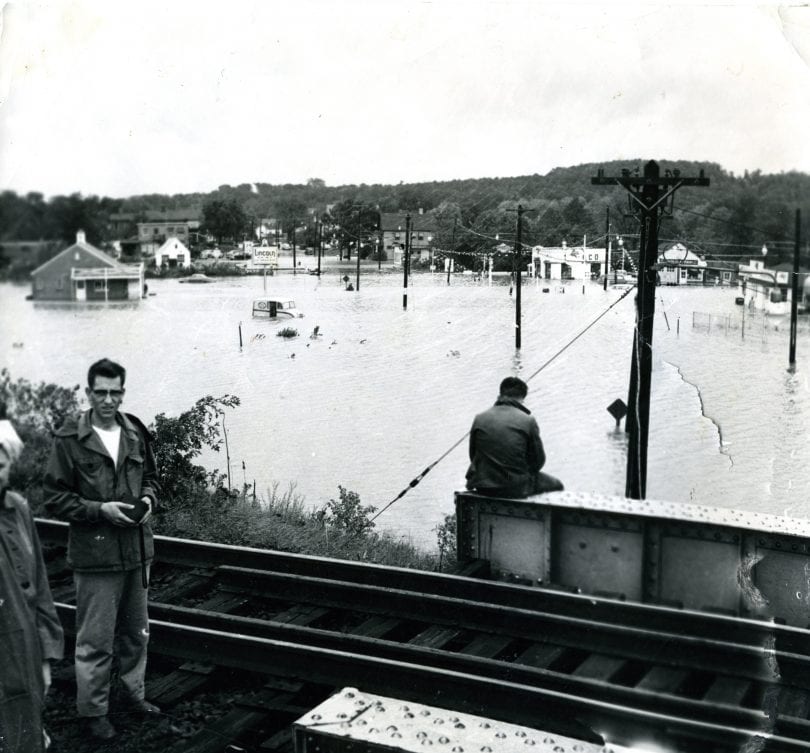 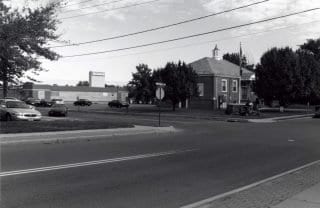 Last week’s photo (at right and in larger size below) was recognized by many of our readers, and has been gone for just about 10 years.

Giovanni Seccareccia started off the comments and knew exactly what this building was: “The old American Legion Hall on the corner of Memorial and Isham Roads. The old Grody Chevrolet dealership can be seen in the background. This is where Blue Back Square stands today. To the left, and out of frame of this photo, would be the Noah Webster Library parking lot.”

Liz Gillette had some firsthand memories of this location: “The site of the Labor Day Fair (That was eventually re-imagined as Celebrate West Hartford after it got too rowdy!) And, yes, the practically vertical library parking lot!”

[Editor’s note: I remember trying to navigate the library parking lot with my son as a baby in the stroller and it was very scary!]

Giovanni added his recollections of the parking lot, although a few might just be an exaggeration … “LOL…that parking lot was scary! In some areas it was almost on a 45 degree angle! Whenever I went there at in the evening to study for a high school test, I had to use mountain climbing equipment, ropes, pick-axe, cleats. In the winter I even brought a St. Bernard with me and put a brandy barrel on his collar…I even learned how to yodel! Yodel-lay-HEE-hOoOoOoooooo! See? LOL.”

“The old American Legion Hall. Since I was a new veteran in the early 70’s, my father-in-law suggested we meet for a beer which was around 20 cents back then. I never took him up on the offer, but have enjoyed a pint or two at the new one at Blue Back with friends and fellow veterans. Sadly, the club seems forced to compromise its facility in order to survive in the community,” added Paul Shea.

Many of our readers added their comments on Facebook, including Beverly Sayer Truebig: “The old American Legion building, which was torn down to make way for Blue Back Square. The post is now located in the building across from Whole Foods, on Raymond Rd.”

“That used to be the corner of Raymond road and memorial road. The American legion hall. We had a few family parties there over the years,” commented Elizabeth McGloin Browne. She added, “Just realized that’s the view of the memorial road/isham road corner. You can see Grody Chevrolet in the background. My uncle Michael was the service manager there for years.”

MaryBeth Callan Serdechny recalled taking dance lessons at the American Legion in the 70s, while Sarah Rommell Falvey recalled dance classes and something else: “American Legion and upstairs home of Coogan School of Irish Dance for some years while the guys drank downstairs!!”

This image also generated lots of reminiscing among old friends, more memories of the Labor Day Fair and playing pool at the American Legion, and a discussion about the car dealerships that included some stories from former employees.

Sandy DeMarco wrote: “Labor Day Fair grounds! I lived on Burr St., so I hung around until the rides came down, and the crowd thinned out. The new school year began on Wednesday, so you could stay at the fair longer, and sleep on Tuesday. It was so great to see the kids you hadn’t seen all Summer, at the fair. I remember vividly, seeing Scott Donahue, my classmate from Smith School at the fair (he was a dreamboat), as we were about to enter Plant Jr. High on Wednesday, and his voice had changed from a kid’s, to a guy’s. It freaked me out, but such is life, which was lost on me.”

“My brother, Doug Briere took me there for a drink on my 21st Bday!” wrote Kim Andrew.

Biff Mellon wrote: “ First time I got the keys to the car-off to the fair. Too many great times at the Legion Hall to count.”

“American Legion Hall on the corner of Raymond Road and Memorial Rd. My dad’s Exchange Club meetings were there. As were my daughter dance recital rehearsals. The parking lot was used for town hall employee parking as I recall. And, Patti, you are right, this parking lot was used for the Labor Day Fair for years and years. Torn down for Blue Back Square,” wrote Lisa Christensen Petersen. 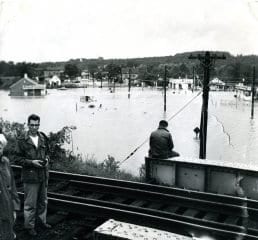 This week’s photo (at right and in larger size below as well as at the top of this column) may not generate as many firsthand memories, but there are probably some readers who will recall this scene and others who will be able to figure it out. 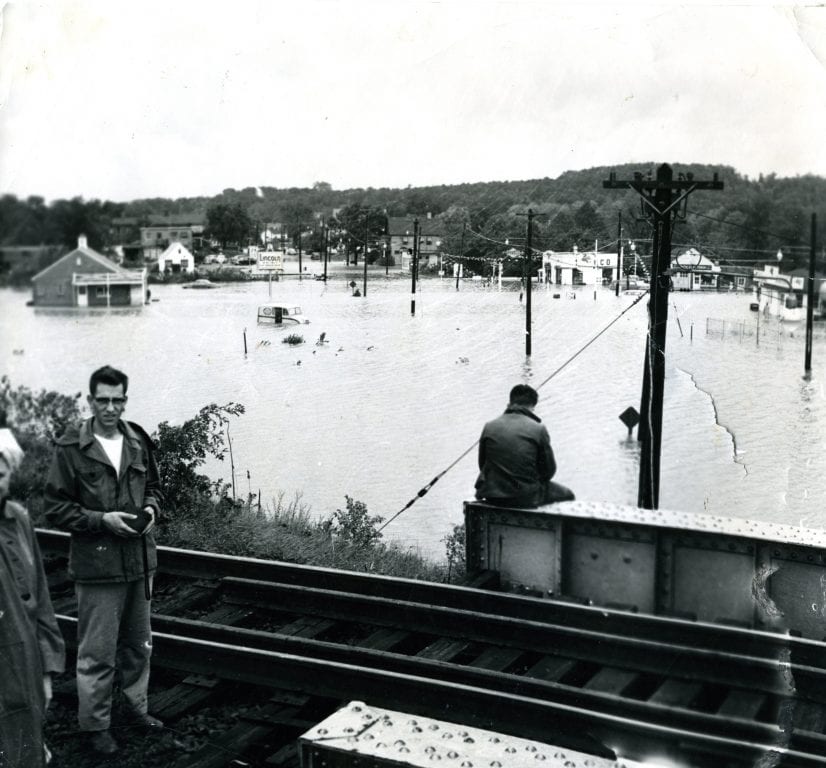 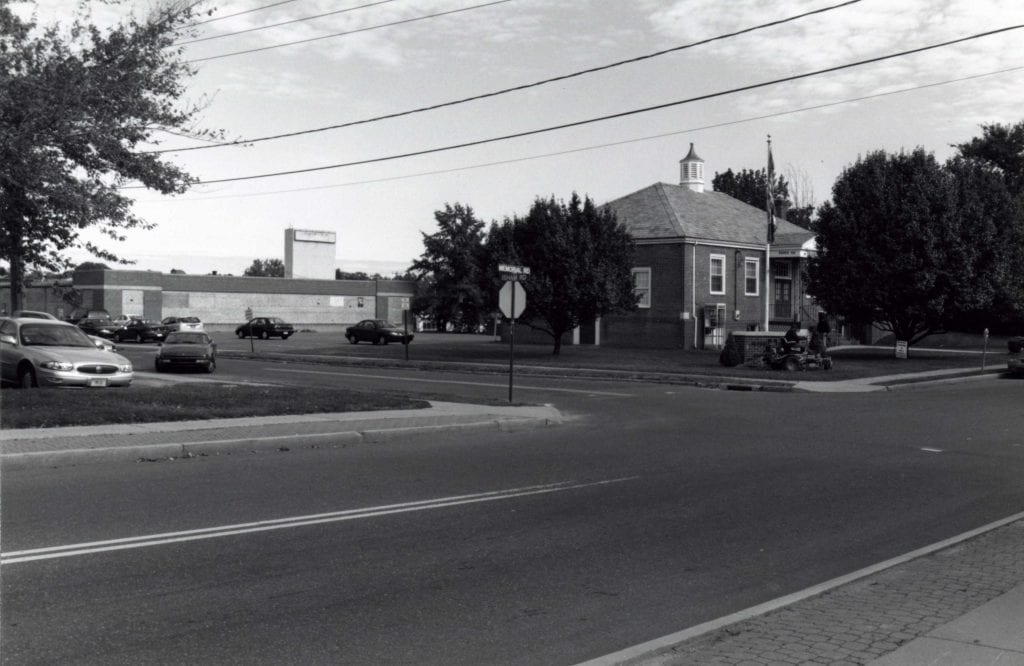