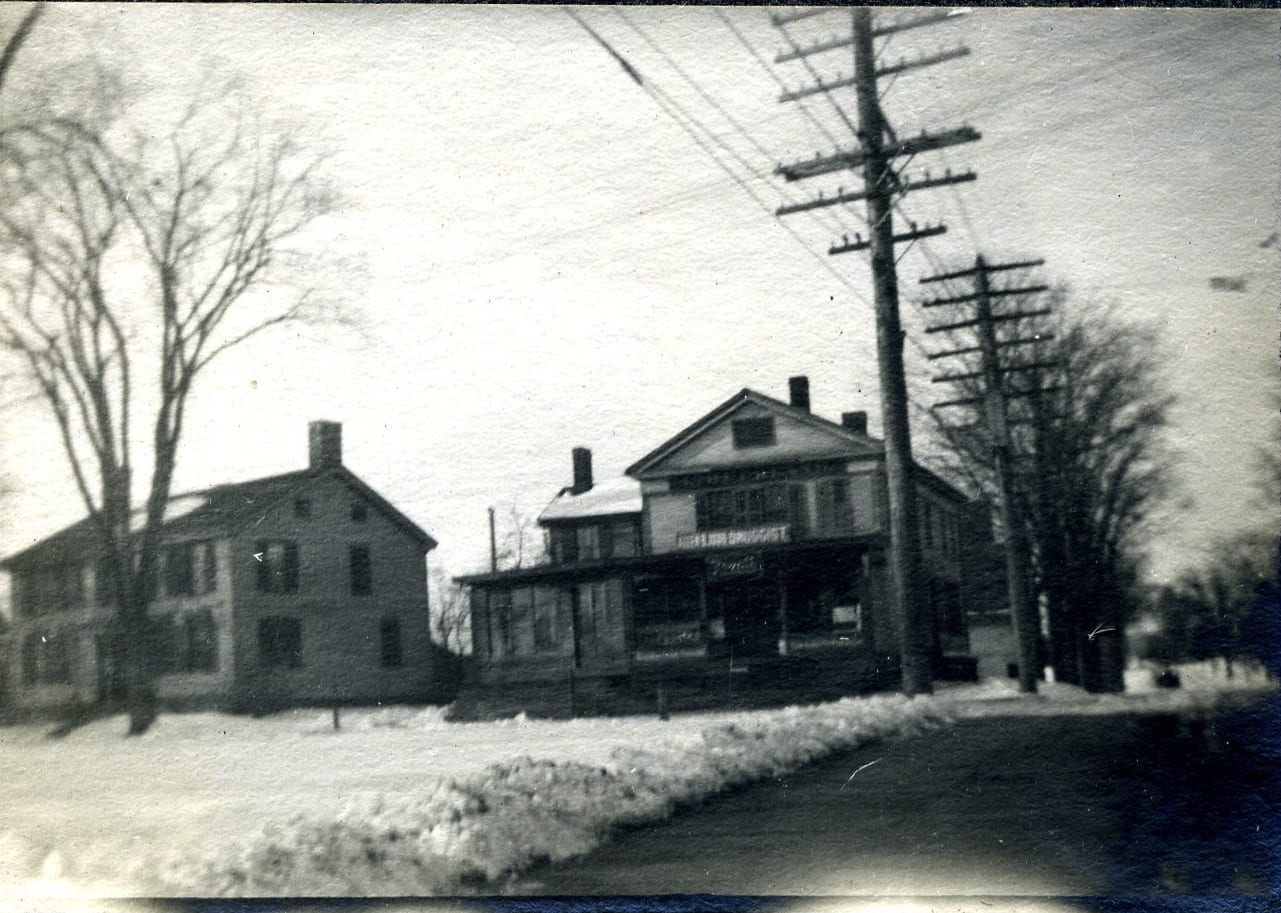 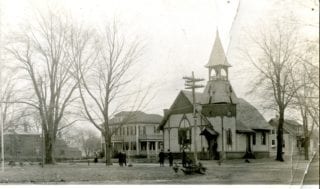 I thought last week’s photo (at right and in larger size below) would stump everyone. Although there were a few early incorrect guesses posted directly on the story, many of our local history buffs who commented on Facebook quickly identified the location of the buildings in the photo, and some provided incredible detail.

“For some reason I think I saw this church on the Boulevard. Is that possible? I don’t think that’s me in the photo though,” commented Dianne Rechel.

“I think it is the church on the South side of Boulevard, about a block West of CVS. I think the spire is gone but the building looks pretty much the same,” wrote Giovanni Seccareccia.

Zachary Hilborn had the following answer (correct except it’s actually Grove Street since South Quaker doesn’t cross over to the south side of New Britain Avenue) posted on Facebook: “This is the corner of south Quaker lane and New Britain avenue, around the turn of the century? Currently located there is the Fernwood and PCW computer repairs.”

“It’s amazing how good it (the church) looks in that location. The former gas station, now PCW Computers is ‘less than iconic.’ Also, it’s sad to see how many beautiful trees and green elements were replaced by asphalt and concrete,” added Rick Liftig.

“It is great to look at some of the old pictures of buildings in town, but sad to think that in so many cases they were torn down because someone thought they were ‘eyesores’ and needed to make way for something more modern,” wrote Ray Petersen, and Rick agreed, adding: “Many of these old structures burnt or rotted due to poor maintenance. But that ‘was’ a very pretty streetscape in the picture.”

It was West Hartford history buff Jeff Murray, who lives in Elmwood, who provided the correct and incredibly detailed response posted on We-Ha.com’s Facebook page: “I’d feel like I’m dishonoring my neighborhood if I didn’t answer this! This is the original Elmwood Chapel at the corner of New Britain Avenue and South Quaker Lane in Elmwood. Built in 1876 just west of Grove Street, it had just over hundred founding members. After the Elmwood Community Church was organized in 1921 and the new edifice was built in 1926 on Newington Road, this chapel housed the Elmwood branch of the library for a couple of years. It was torn down in 1940 to make way for a gas station, specifically Tydol. The large house to the left of the chapel in the photo was built around 1908 or so by Hugh Montgomery, who also owned land north of Bishops Corner. It was also torn down in 1940 to make way for the Fernwood and related stores. And finally, the square brick homestead to the far left was the Hurlbut house, which was at the corner of Newington Road and New Britain Avenue, on the site of Jerry’s Artarama today. Originally a tavern in the 1800s, it held several generations of Hurlbut descendants in West Hartford until the last – Vincent Hurlbut – who served as Chief of Police – sold the house in 1949 to make way for Hartford Federal Savings in 1950.” 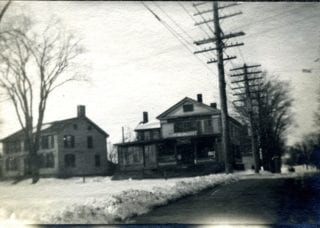 It’s hot and humid in West Hartford right now, so this week’s photo (at right and in larger size below) is a seasonal throwback as well as a throwback in time.

What is/was the main structure in the photo?

What is in this location today? 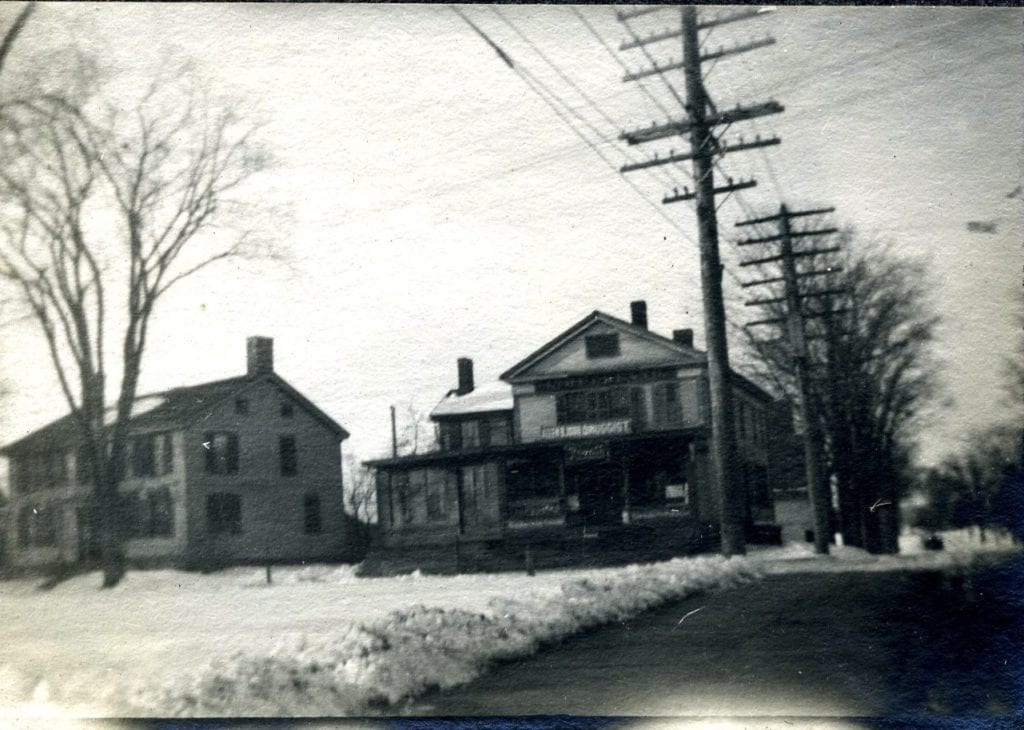 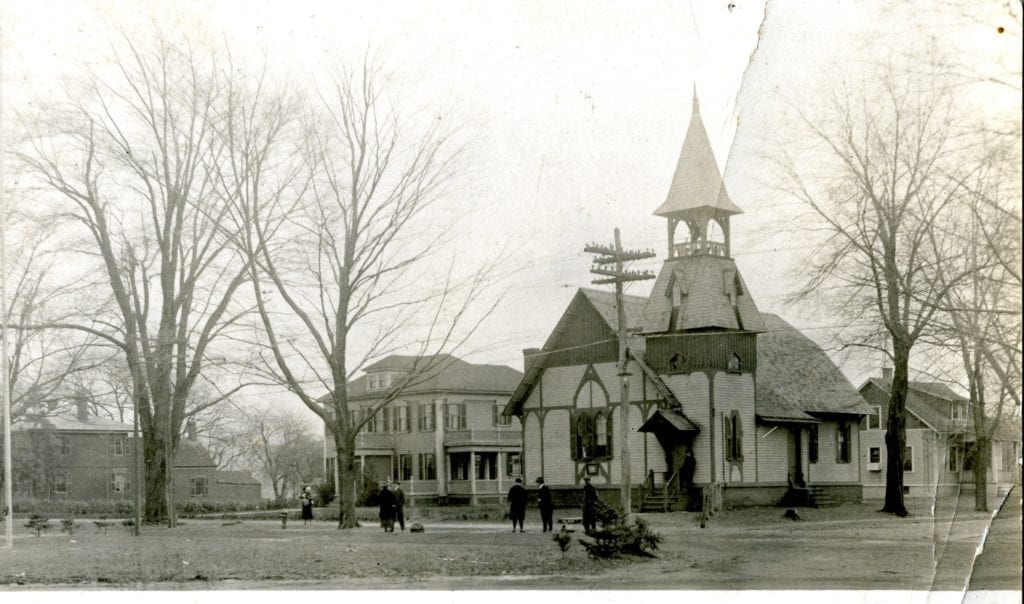