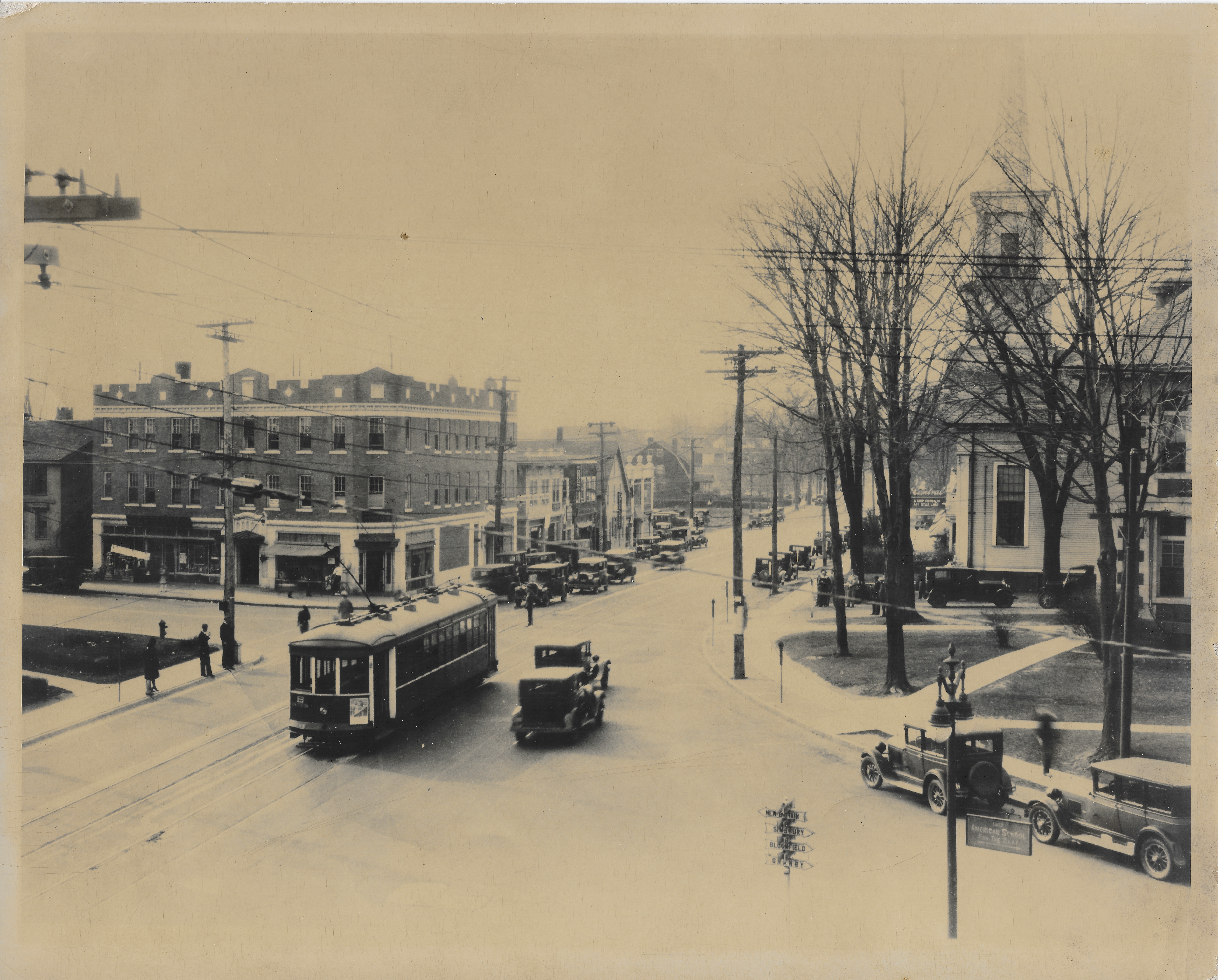 As there has been for the past several weeks, this week there is an extra name in the credit for this week’s historical photo. Town Manager Ron Van Winkle came across a stash of historical photos in his office, and graciously offered to share them with us as well as the Noah Webster House & West Hartford Historical Society. 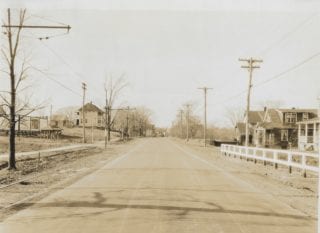 Last week’s photo (at right and in larger size below) was a really tough one, that stumped even our best history buffs.

There were lots of great guesses, and deductive reasoning used to try to figure out where this photo was taken.

“This looks like Newington Road to me. The trolley tracks on the left brought you to Newington,” commented Linda Root.

Giovanni Seccareccia at first thought South Quaker Lane near the corner of Boulevard, looking south toward Park Road, but also commented that he thought it could be “Maybe Park Road looking west from near, what is now, Joey’s Pizza? One last guess … looking west on New Britain Avenue looking west from Elmwood … now I give up! LOL”

Tracey Wilson guessed: “Is it Farmington Avenue looking west toward Main Street? I notice the improvements of sidewalks which were done by the west Hartford improvement society around the turn of the 20th century.”

“I know I’m very late to the discussion but I have been baffled. I think Linda Root may have it,” added Liz Gillette several days after the photo appeared. “There appears to be some sort of a bleachers set up on the left, like around a ball field. The railing on the right reminds me of what you see near a small brook. Could this be Newington Rd. from about the Stop&Shop Plaza. There is a small brook there. Just guessing.”

Jeff Murray and Rick Liftig had quite a debate about this photo on Facebook, attempting to analyze clues such as the visible shadows.

“Wherever this is – I’m stumped. There are trolley tracks to the left though. This looks like 1920s. That’ll be my guess. Not too many hints. More information I can speculate on: the shadow of the tree is cast across the road, meaning the road runs north to south. If it ran east to west, the shadow wouldn’t happen across the street. So that eliminates Farmington Ave, Park Road, etc. That only really leaves New Park Ave, Prospect Avenue, those types of streets,” commented Jeff.

Rick said: “I think this is Farmington Avenue (approaching the reservoir) and the road on the left is Reservoir Avenue; BUT there is no sidewalk there, so I have a healthy dose of doubt. There are billboards on the left and it’s possible that these were signage for the ‘dude ranch.’ Yes, WH had its very own ‘dude ranch’ on Selden Hill!”

But Jeff [correctly] said that the trolley tracks on Farmington Avenue were on the north side of the road, not the south side, so he thought maybe this was Park Road.

Some other guesses posted on Facebook: Boulevard from Prospect to Quaker Lane, Newington Road, South Quaker looking north with Beachland Park on the left, Troutbrook near Park Road, and New Park Avenue.

The right answer: New Britain Avenue, looking west toward Merline Avenue, which is the road in between Abbotsford Avenue and Hillcrest Avenue, right near the Hartford line. This was a very tough one, with some very interesting suggestions, but one of Giovanni’s guesses was correct! 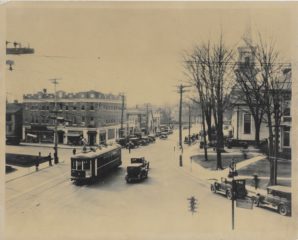 In honor of the discussions about the trolley, this week’s photo (at right and in larger size below) features a trolley.

The location is much more obvious, but what else can be seen in this photo? It was scanned at very high resolution, so the sign near the lower righthand corner should be visible if readers can zoom in on the photo. What does the sign direct to?

What are some of the visible businesses?

How has this intersection changed over the years?

Thank you to Town Manger Ron Van Winkle, and the Noah Webster House & West Hartford Historical Society for providing us with the images. They are always looking for new images to add to the collection. Visit their website at www.noahwebsterhouse.org for more information about membership and programs. 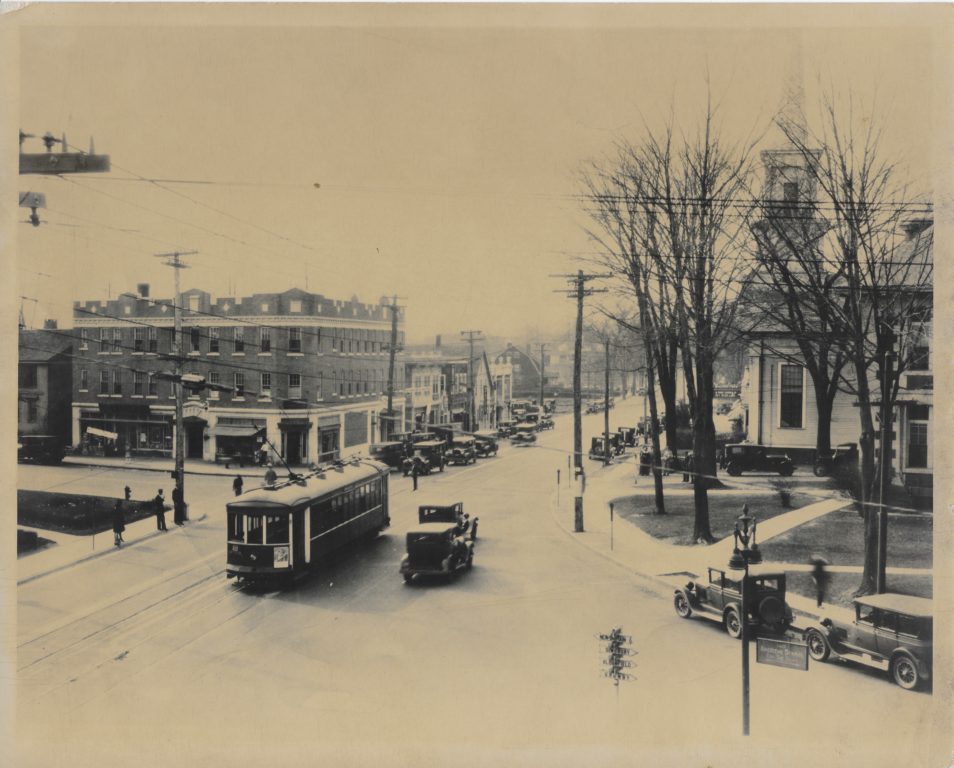 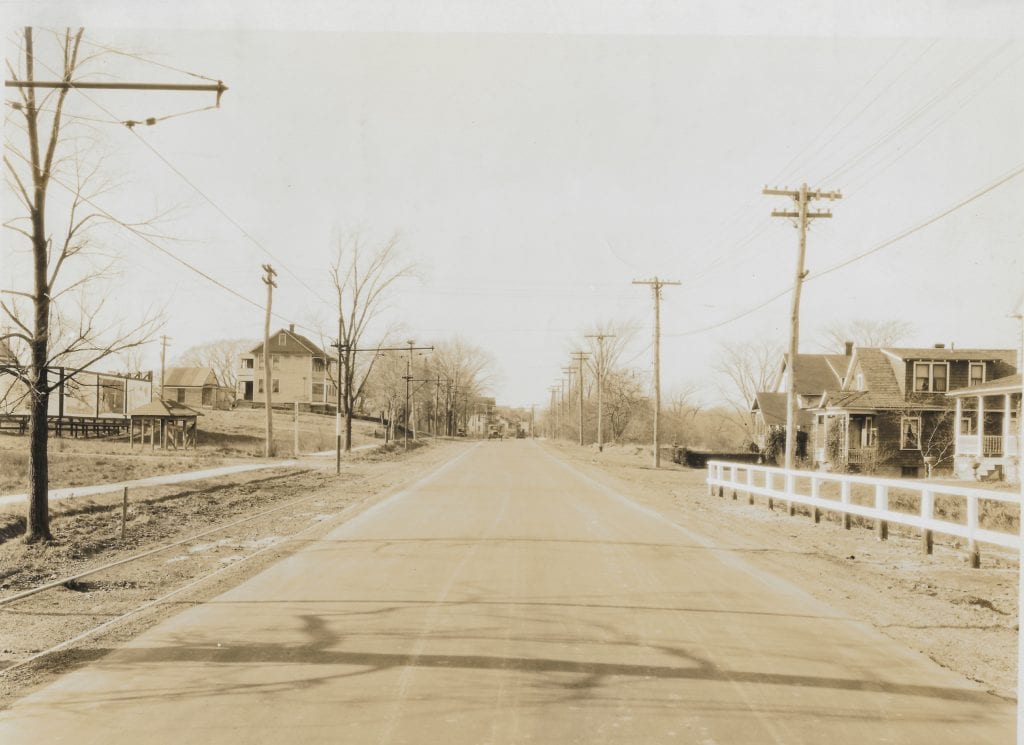 We-Ha.com is the place to go for the latest information about West Hartford – a town that "has it all"! We-Ha.com is part of and proud of our community, and we bring a hyperlocal focus to news and features about the people, schools, businesses, real estate, sports, restaurants, charitable events, arts, and more. Contact us at: [email protected] or [email protected]e-ha.com.