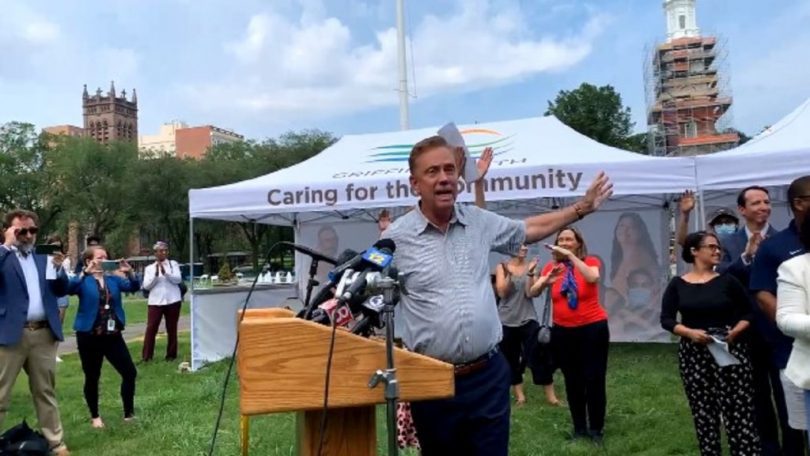 Gov. Ned Lamont at a press conference in New Haven on Monday (screen shot courtesy of the New Haven Independent and CTNewsJunkie.comm)

After just having a handful of cases per day over the past several months, data released Monday indicated that West Hartford had 24 new positive COVID-19 cases over the weekend, and 53 in the past week.

State and youth sports officials encouraged eligible student athletes to get vaccinated against the COVID-19 virus Monday, but declined to say whether it would be a requirement for participation during the coming school year.

With schools reconvening in a matter of weeks and COVID cases resurging amidst spread of the more-infectious Delta variant, parents and students are waiting for directions from the state on which, if any, public health measures will be required in classrooms and athletic fields.

During a morning press conference near a mobile vaccination clinic on the New Haven town green, Gov. Ned Lamont said the COVID-19 situation was changing too rapidly to say what may be required at the end of next month. He did not rule out an eventual mandate and suggested that coaches were already capable of requiring players to get the shot.

On Monday, in a report that included test results from the past three days, there were 589 new positive cases, and hospitalizations increased by 32, to 108.

During the press conference, Glenn Lungarini, executive director of the CIAC, said the youth sports organization was in conversations with state agencies to urge student athletes to get the shot. But Lungarini would not say whether CIAC and the state were discussing requiring vaccination.

“[Sports is] as much about helping others achieve their goals as it is your own personal ones. So we’re encouraging everybody to be the best teammate you can be. Get vaccinated,” Lungarini said. “We’re confident that the kids in Connecticut are going to answer that call.”

Currently, children as young as 12 years old are eligible to take the vaccine. However, their uptake rates have been largely stagnant this month. As of Thursday, 67% of residents ages 16 and 17 had gotten at least one shot and 51% between the ages of 12 and 15.

West Hartford Superintendent of Schools Tom Moore scent an email to families last week, reminding them that for students to be fully vaccinated by the time school begins, the first shot needs to be administered within the next few days. West Hartford Public Schools resume on Sept. 1, and with the Pfizer vaccine as the only one available for anyone under the age of 18, the first shot would need to be given by July 28 to allow for three weeks between doses and the 14-day period for immunity to build.

Given the rising infection rates, Lamont was asked whether he was considering renewing public health restrictions aimed at slowing the virus. The governor said he did not anticipate issuing any such orders. “Nobody wants mandates,” he said.

Instead, the governor tried to appeal to the team spirit of the vaccine-hesitant population.

Although he was reluctant to discuss mandates, the governor said the state’s efforts to incentivize vaccine uptake had, so far, failed to “move the ball dramatically.” New Haven Mayor Justin Elicker said incentives in his city have not had a huge impact.

Lamont said he and regional governors would likely discuss the possibility of reinstating travel restrictions but currently had no plans to do so. In the meantime, Connecticut residents should consider avoiding travel to states where infection rates were high.

“Probably not a really good week to go to Missouri or Arkansas, is sort of my sense,” Lamont said. “I’d probably skip Florida as well.”