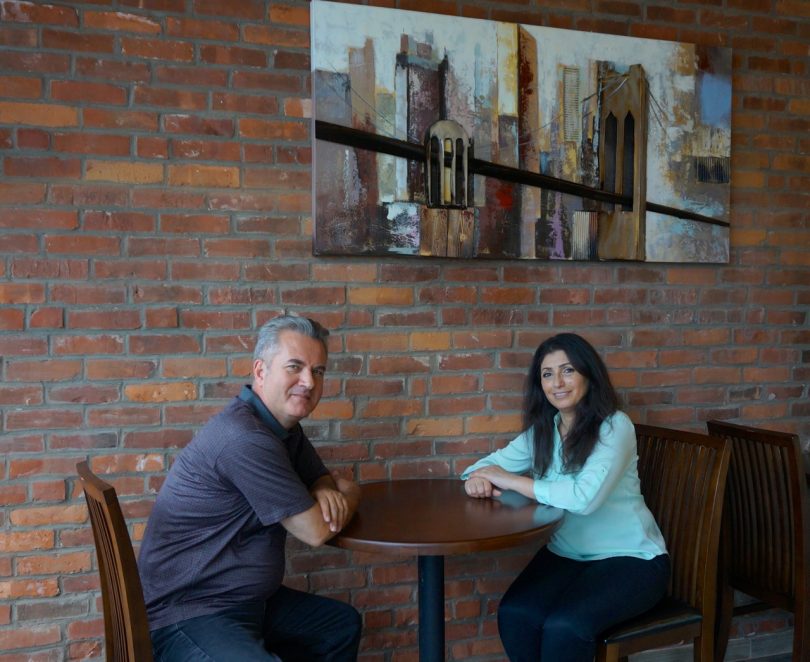 Omar and Zainab Hayajneh have brought flavors of their native Jordan and other parts of the Mediterranean to West Hartford's Park Road. Photo credit: Ronni Newton

Zainab Hayajneh and her husband, Omar, are the bistro’s owners. Both are from Jordan, and bring the unique spices and preparations of their home country as well as the more recognizable Lebanese and Moroccan dishes to a menu that Zainab said is “kid-tested.”

“Any dish I’ve tried and liked, I come back home and try it for my kids,” she said. She and Omar have four children, two at Hall High School and two in college. “If it’s not yummy they won’t eat it,” she said.

A few key ingredients drive the menu, including olive oil, beans (lentils, chickpeas, fava beans), and walnuts, Zainab said. It’s a healthy menu for everyone, and one that works for diabetics, vegans, and many others who follow specific diets.

Sumac, a spice ground from the fruit of a flowering plant, is also a key ingredient and one which many area residents may not recognize. Zainab said it evokes a lemony taste.

West Hartford has several other restaurants that serve Mediterranean food, including the recently-opened Zohara, but Zainab said that while they offer some similar dishes, all offer unique preparation and specialties.

Zainab said she’s particularly proud of the hummus served at Zaytoon’s Bistro. It’s prepared with dried chickpeas, soaked overnight and then boiled for four hours until they become creamy, and then mixed with other fresh ingredients.

“I don’t like anything frozen. I like to buy everything fresh and then cook it,” Zainab said.

That freshness extends to the meat, chicken, or seafood – all visible in a display case in the front – that are chosen by the diner just before being prepared into a variety of delicious main dishes. The roast beef is cooked fresh in the oven on the premises, too, Omar added.

The menu is extensive, but according to Zainab some of the distinctive highlights include the “Dajaj Msakan Sanyieh,” described on the menu as “boneless half chicken oven baked, mixed with olive oil, special spices, served on a special flat bread topped with onions, sumac spice, and almonds.”

“The sumac makes this distinctive,” Zainab said of the dish.

“Tomato Qalayeh with Lamb – no one has it,” Zainab said. This dish includes chunks of lamb with tomato, garlic, olive oil, onions and cilantro.

She said the “Kofta Sanyieh” should be eaten with bread. The meat/onion/parsley mixture topped with tahini sauce, lemon juice, potato, and onion is something that diners will definitely find unique, Zainab said.

“I’ve traveled many places but I’ve experienced this salad just in Jordan,” Zainab said of the Zaytoon’s salad, which combines white cabbage, spinach, carrot, apple, orange, kiwi, and pumpkin seeds and dressed with a homemade feta/olive oil/yogurt blend. The fruit and vegetable combination makes the salad an ideal energy boost for athletes.

Even the spaghetti is offered in a distinctive preparation, a slightly spicy sauce crafted from mild red pepper, garlic, cherry tomatoes, fresh mushrooms, and cilantro. “If you eat it you won’t be able to stop eating it,” Zainab said.

The gyros are made fresh from a homemade mixture of beef and lamb. Grape leaves are stuffed with garlic, onion, fresh tomato, fresh and dried mint, olive oil, and parsley.

In addition to the standard tomato and onion mixture, the Fattoush includes cabbage, arugula, and green pepper, Omar said. The dressing is a homemade mix with oil, vinegar, and lemon juice as a base.

There are more “standard” deli sandwiches like turkey and tuna on the menu, but Zainab is hoping diners will be adventurous and enjoy the authentic Mediterranean fare. “I want you to try our real food, not the usuals you eat,” she said.

While Zainab doesn’t plan to do all of the cooking – the restaurant employs a chef – most of the recipes are hers. “I have my chef, but I also like to do things myself. I like to do it as I do it at home,” she said.

Alcohol is not served at Zaytoon’s, but Omar said BYOB is welcome.

In addition to lunch and dinner, Zaytoon’s also offers breakfast beginning at 7 a.m. The breakfast menu includes eggs, bacon, pancakes, and French toast, but there are also numerous Mediterranean twists like the bananas with halaweh on pita which Zainab said can provide an energy boost to last for hours.

There are omelettes, some with unexpected additions. The Jordanian omelette has a touch of added flour and is served with a side of fava beans. The farmer’s omelette includes cauliflower and is so thick that leftovers can be cut up and served cold as picnic fare.

There’s an “Intercontinental breakfast” for diners who want a hearty plate of food, and the “GrandPa breakfast” which includes fouel diced with garlic, lemon juice, and olive oil, a macdons lebneh, and zate zata (olive oil) served with pita. “It gives you strength; it’s full of protein,” Zainab said.

The coffee, ground fresh on the premises, is rich and strong, Omar said. It’s a Baronet European dark roast that he first tasted in the office of his landlord, Michael Reiner, he said.

Although some of the ingredients sound unfamiliar, Zainab said that many are recognizable but what it different about the food at Zaytoon’s is the preparation and the spices. “They are the real spices we have back home,” she said.

Zainab said she was born in Jordan but moved to the U.S. in 1995. Their kids were all born in the U.S.

She and Omar worked in the deli business in New York and returned to Jordan after earning her masters at St. John’s University. Back in Jordan the couple owned several businesses – a furniture market and a sweet shop.

Zainab and Omar returned to the U.S. and made their home in West Hartford in 2014. “We really liked it and it was the right place for the kids,” she said. For the past several years have been commuting to the two businesses they owned in the Sandy Hook area of Newtown.

“I’m so excited,” Zainab said. “Park Road is growing, and we have so many different types of food options.”

During the months it took to cut and redo the interior of the space – install a new floor and new restrooms, expose a brick wall – of the former Melo Mini Mart, the Hayajnehs have gotten to know their neighbors. 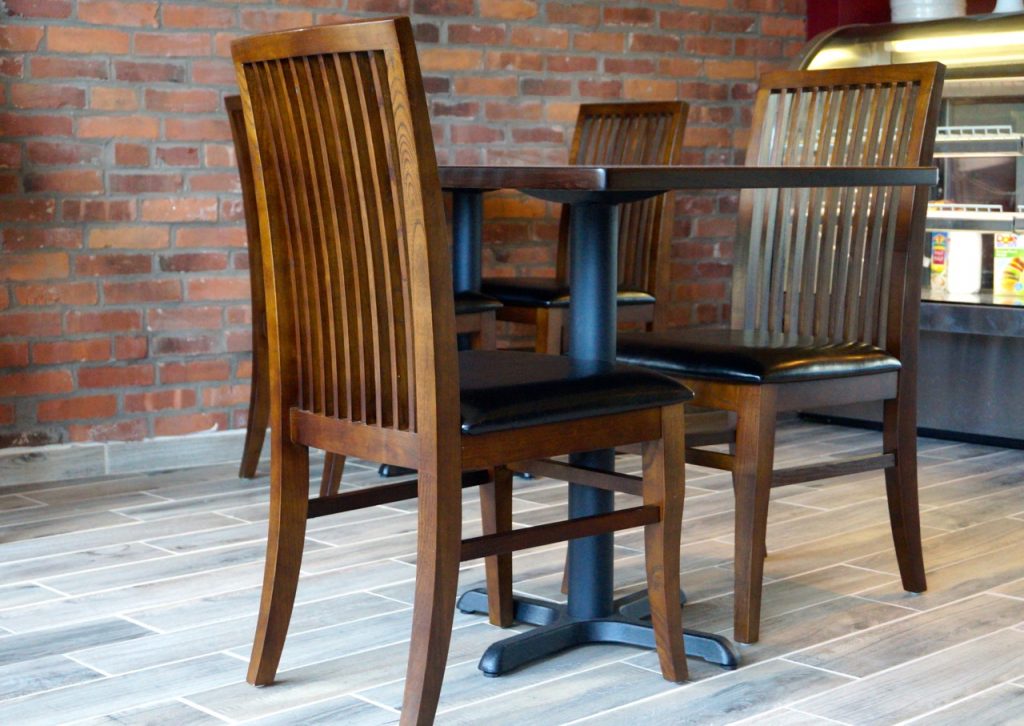 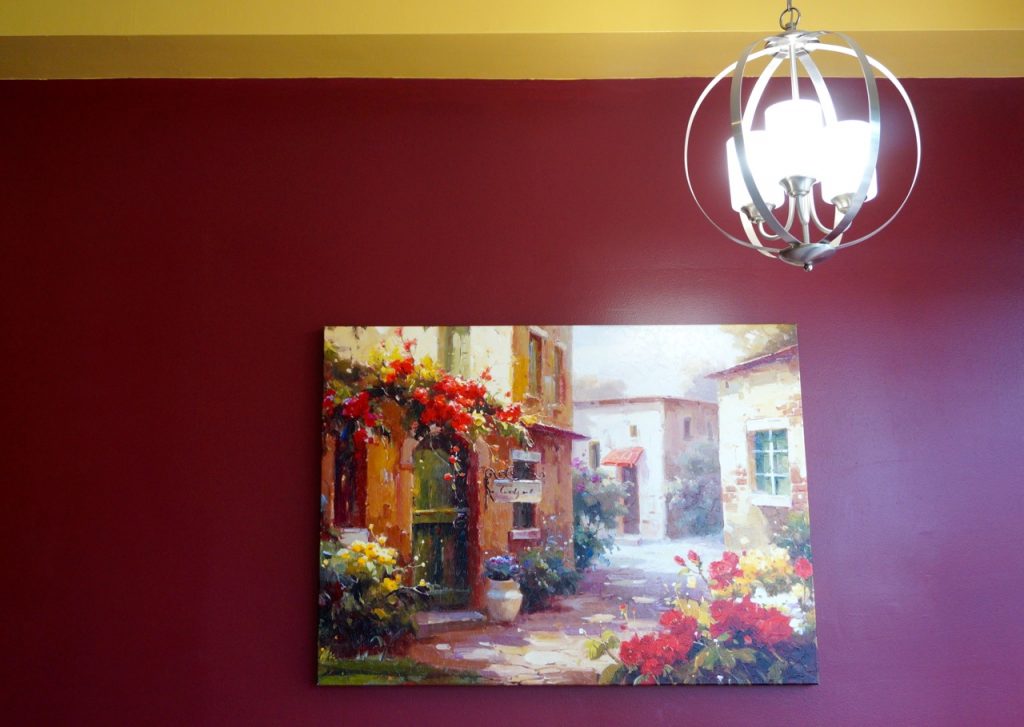 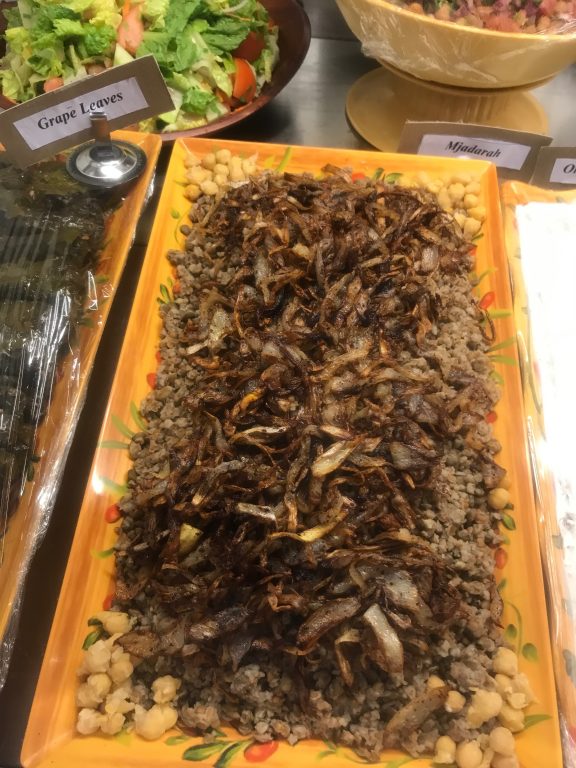 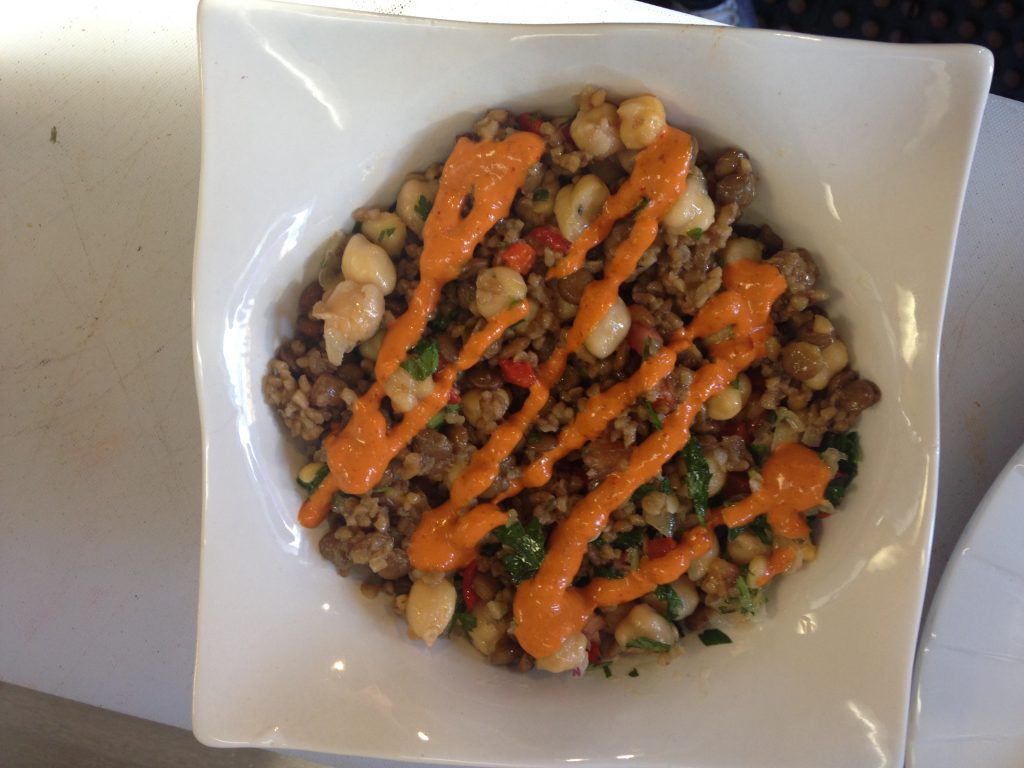 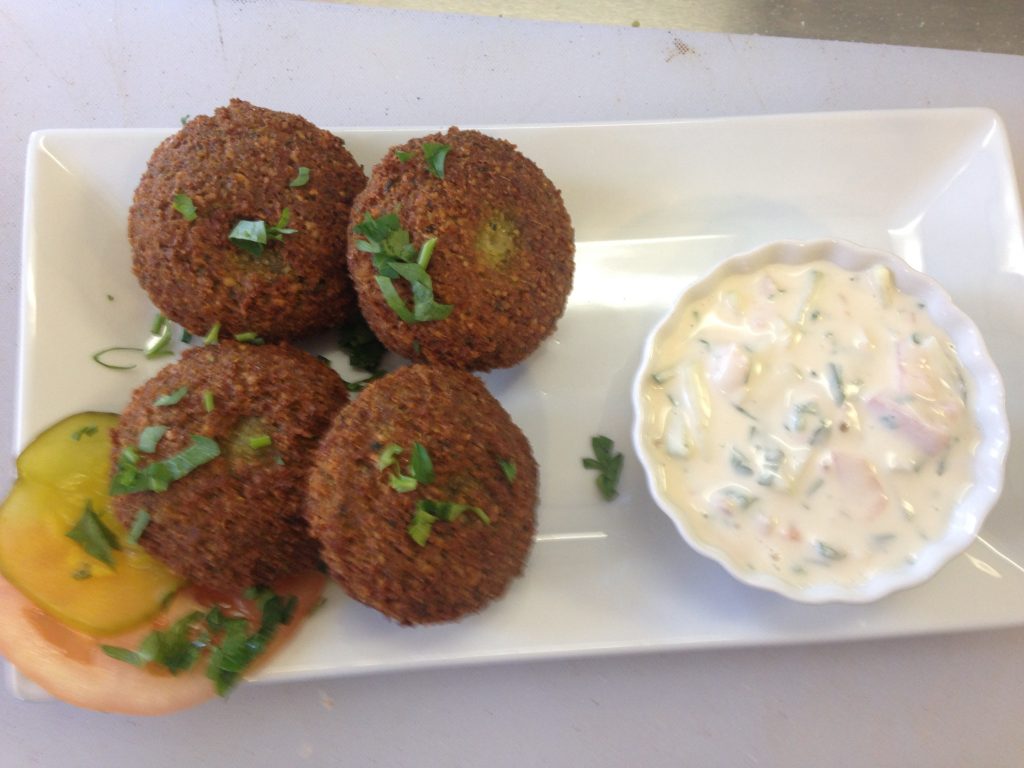 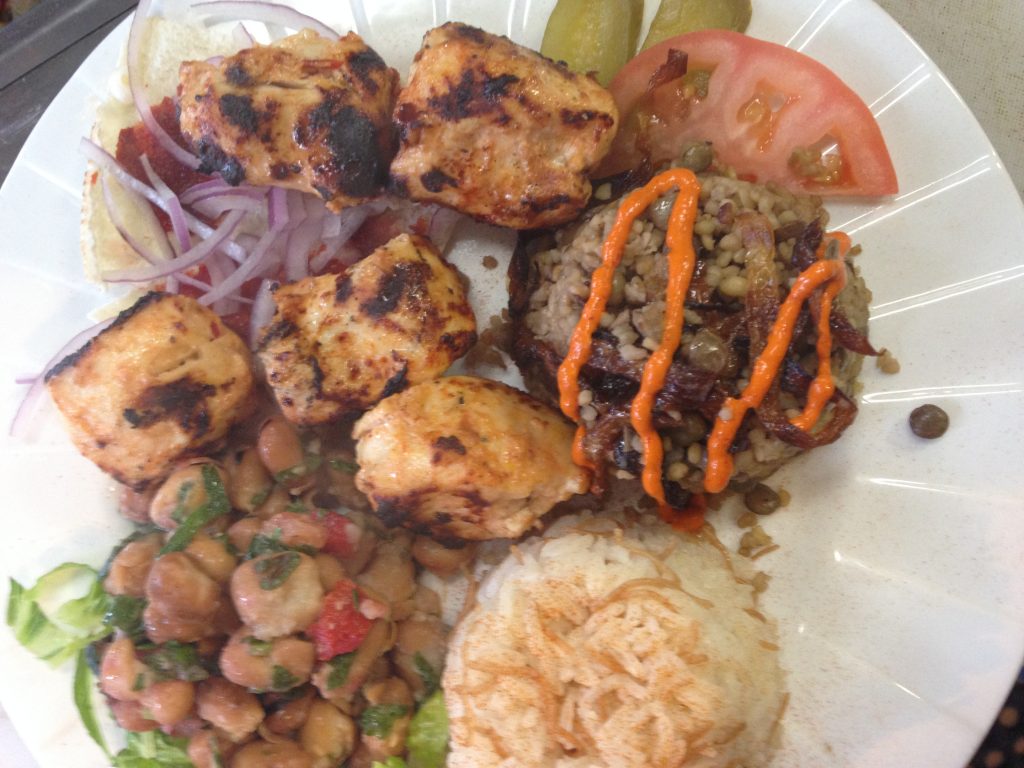 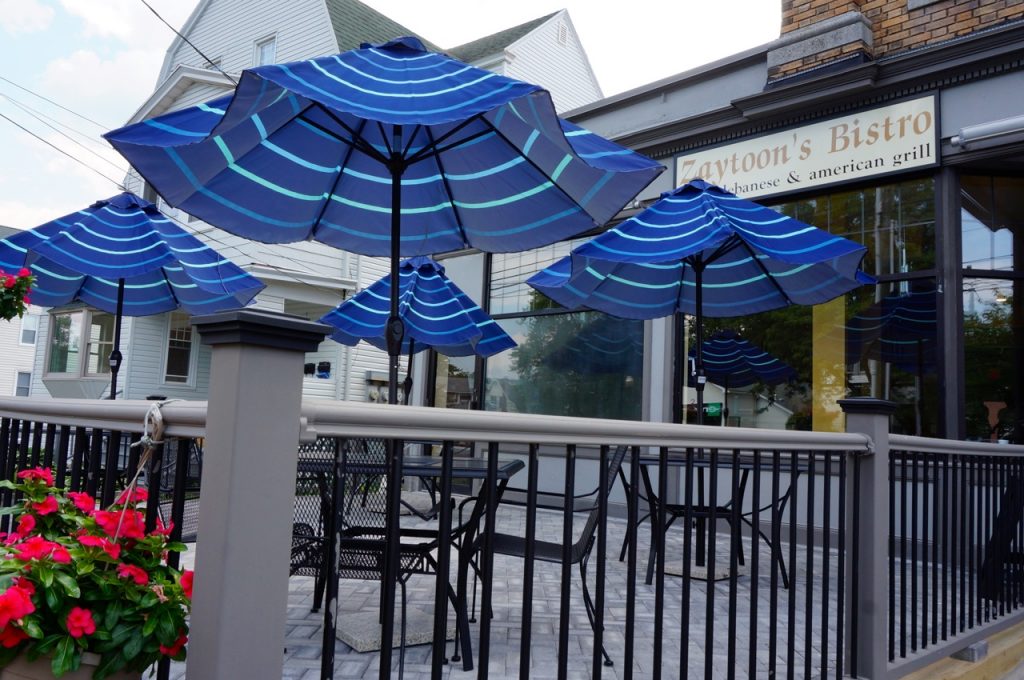 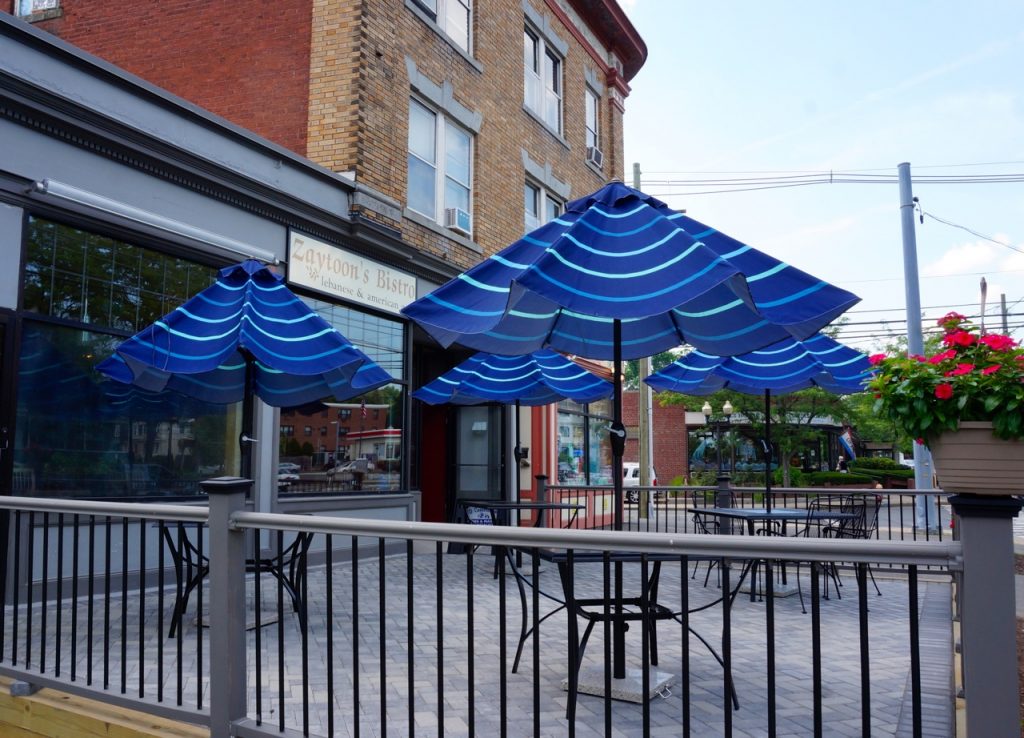 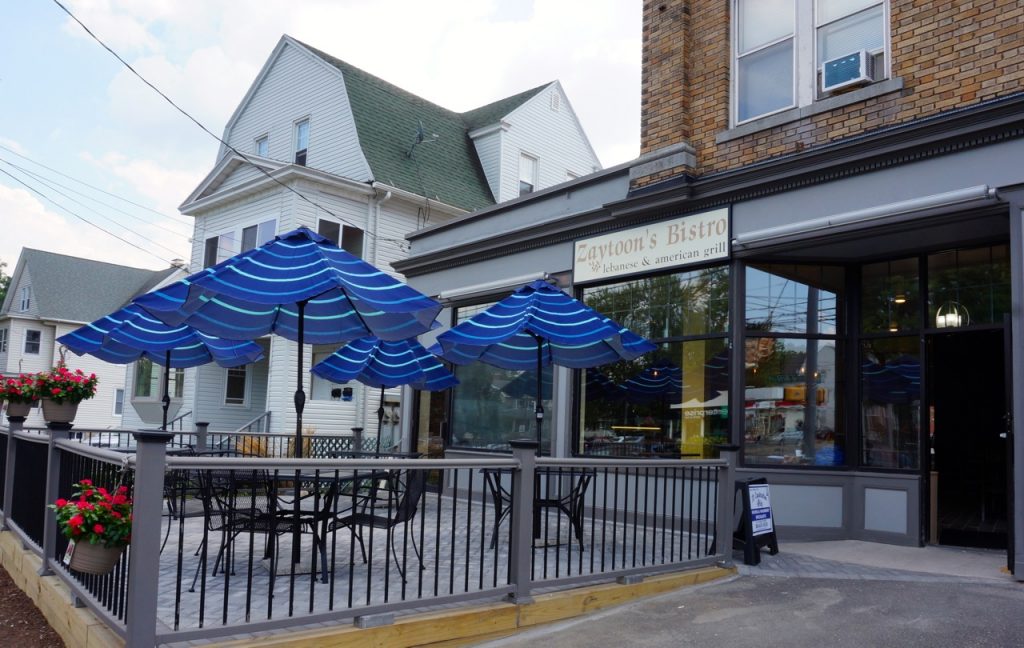 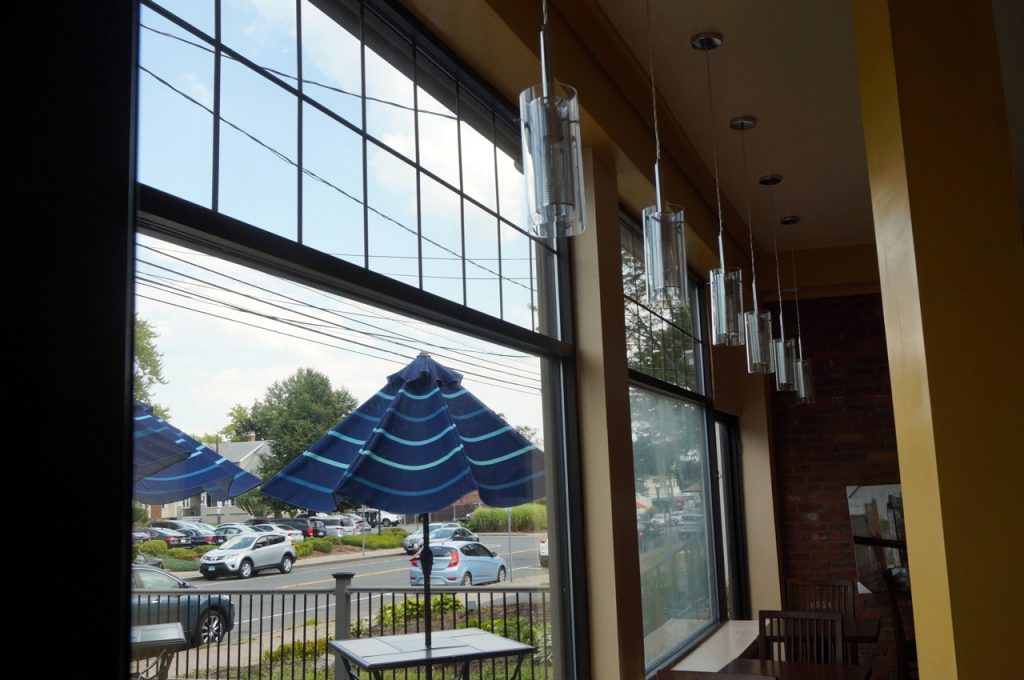 View outside the window at Zaytoon’s. Photo credit: Ronni Newton