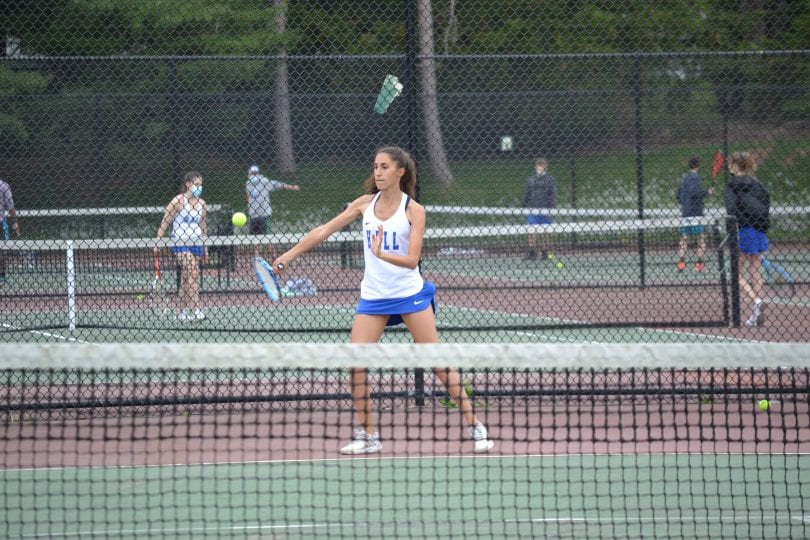 Milena Leonidas plays in a match vs. Middletown on the courts at Hall High School on May 3, 2021. Photo credit: Paul Palmer (we-ha.com file photo)

The replacement of the 24 tennis courts at West Hartford’s Conard and Hall high schools is expected to be approved at the March 31 meeting of the State Bond Commission.

The 25-year-old tennis courts at Conard and Hall high schools have reached the end of their serviceable life, and the $3 million replacement cost was included in the Capital Improvement Plan for Fiscal Year 2022-2023, but West Hartford’s legislative delegation announced Thursday that funding for the project has been added to the agenda for the State Bond Commission’s March 31 meeting, and is expected to be approved.

The 24 tennis courts – 12 at each of the public high schools – are used by the girls’ and boys’ tennis teams at Conard and Hall, other students and are also free and accessible to other members of the community. They also serve as the site for state high school tennis championship competition.

“The tennis courts have served our entire community well for decades but time has taken its toll and annual bills for upkeep run about $60,000,” state Sen. Derek Slap told We-Ha.com. “I’m so pleased that our legislative delegation, working closely with Mayor Cantor, was able to secure this funding for West Harford. Recreation is critical for our physical and mental health – and this funding will ensure a generation of students and residents have great courts to play on. Of course, residents who never pick up a racket also benefit because the state support saves West Hartford taxpayers more than $3 million.”

Gov. Ned Lamont, who chairs the State Bond Commission, said, “This state funding will help ensure that these sports facilities in West Hartford remain functional and are able to support the athletic needs of the community. I am glad that we are able to release these funds and partner with the Town of West Hartford on this project.”

Plans – which have been developed as a collaboration between the town and West Hartford Public Schools – are to replace the existing asphalt courts with state-of-the-art tension concrete courts, and also replace the exterior fencing and nets. The new courts would have a 20-year warranty from structural cracking, heaving, and settling, as well as a 10-year warranty from bubbling and peeling.

Superintendent of Schools Tom Moore, when he presented the Capital Improvement Plan to the Board of Education in January, said the new courts are likely to last as long as 30 years.

The tension concrete courts are more durable and will also save in maintenance costs. Asphalt dries out and shrinks over time, leading to hazardous cracks, and the town spends roughly $60,000 per year in resealing and other repairs.

“The state bonding for the tennis courts at our two public high schools is greatly appreciated and is an investment in the health and well being of our students and community,” Mayor Shari Cantor said in a statement. “I want to thank Senator Slap and Governor Lamont for their support for our community and our students.”

“Athletic facilities at Hall and Conard High Schools have needed upgrading for quite some time now,” state Rep. Tammy Exum said in a statement. “I am proud to have worked alongside my colleagues to help secure the funding and would like to thank Governor Lamont for approving this much-needed project.”

State Rep. Kate Farrar expressed her thanks to the governor as well as state Rep. Dorinda Borer (D-West Haven), who co-chairs the State Bond Committee, and the entire Connecticut State Bond Commission for their support of a project to provide safe and modern facilities for residents and student-athletes. “This is great news for the health and wellness of our community. I am pleased to have worked alongside town leaders and my colleagues in the West Hartford delegation to secure these funds for our town,” Farrar said.

“I want to thank the Bond Commission and Governor Lamont for their consideration of this project. Conard and Hall High School are long overdue for an update to their tennis courts,” state Rep. Jillian Gilchrest said. “I am hopeful that this will pass in the Bond Commission vote and excited to see this project get underway so students and members of the West Hartford community can enjoy this recreational space for years to come.”