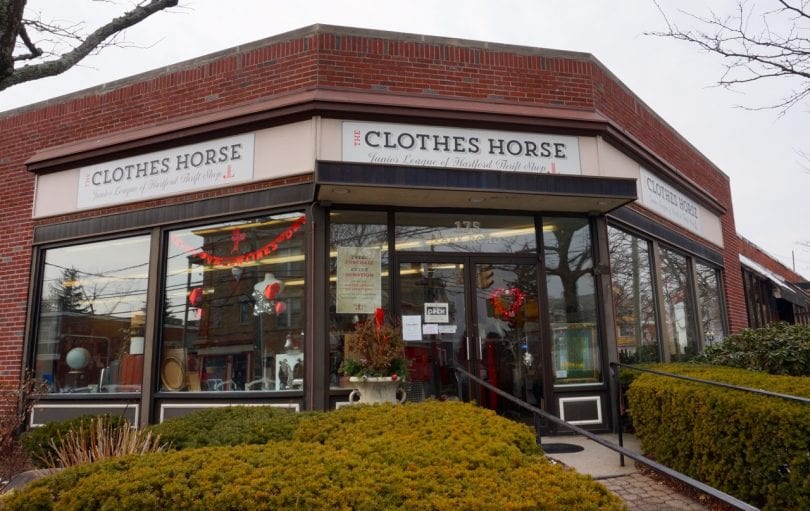 The Clothes Horse has been on the corner of Park Road and Oakwood Avenue in West Hartford for 45 years. Photo credit: Ronni Newton (we-ha.com file photo)

The Clothes Horse has been located on West Hartford’s Park Road for 45 years, and has been in business for 70 years, but the Junior League of Hartford has made what members call a very difficult decision to close down the business.

The “For Lease” signs that appeared in the windows of 175 Park Rd. several days ago mean business, or more accurately, an end to a business that has graced that very same corner for 45 years.

After 70 years of supporting the projects and programs of the Junior League of Hartford (JLH), 45 of those years spent on Park Road in West Hartford, the Clothes Horse will close for good early this fall, most likely in September.

“We recognize the tireless work of the dedicated store staff, without whom the store could have never survived for so many years,” said JLH President Whitney Sweeney in a news release announcing the closing.

The Junior League had updated and rebranded the Clothes Horse as a “thrift-que” about three years ago, in an attempt to compete amid the growing online marketplace for used clothing and accessories that had made a major dent in the brick and mortar store’s business. In an interview with We-Ha.com in February, the store manager noted that they had also began accepting designer handbags on a consignment, rather than donation, basis.

The store attracted a broad range of customers, young and old and from a variety of economic statuses, but just not enough of them.

In Monday’s announcement, the Junior League of Hartford noted that the Clothes Horse has been a mainstay in both the Hartford and West Hartford communities for generations, and should be celebrated for its “accomplishments, successes, and service” over the years. However, the changing economy and retail landscape has not only led to a dramatic decrease in revenues from the Clothes Horse, but actually led to the operation costing the JLH money to operate.

The Clothes Horse has existed to fund the JLH’s programs, and also to support the organization’s “mission to promote voluntarism, develop the potential of women, and improve our community through the effective action of trained volunteers.” However, the past fiscal year brought the largest deficit ever, and leadership realized that despite their best efforts, the operation had become unsustainable.

“After several years of drastically declining revenue, steadily increasing fixed operating costs, and growing competition among the resale market, the JLH will begin the process of ceasing operations of The Clothes Horse by early fall,” the release states.

The Clothes Horse will accept donations of clothing and other goods through July 3, and will begin a series of sales with heavily-discounted prices in an attempt to liquidate all merchandise. There are also plans to collaborate with community partners for customer appreciation days.

Anyone interested in leasing the space at 175 Park Rd. should contact Rick Liljedahl of Park Oak Associates at [email protected].