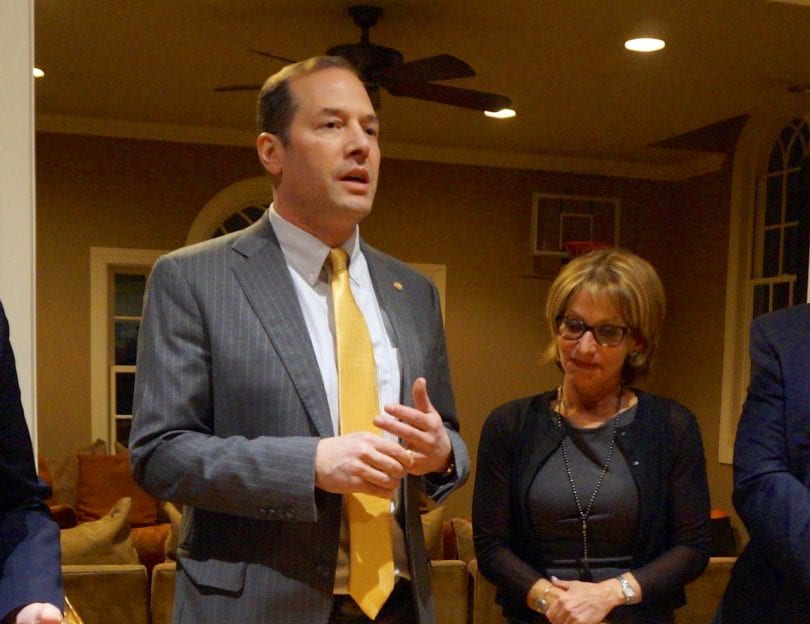 State Rep. Andy Fleischmann announced his plans to run for a 13th term at a fundraiser at the home of West Hartford Mayor Shari Cantor on Jan. 29. Photo credit: Ronni Newton

Andy Fleischmann kicked off his campaign for the 18th State House District on Monday, Jan. 29, at the home of West Hartford Mayor Shari Cantor.

State Rep. Andy Fleischmann officially declared his candidacy, and kicked off his re-election campaign for the 18th District seat he has held for more than two decades, at a fundraiser at the home of West Hartford Mayor Shari Cantor and her husband, Michael, on Jan. 29.

Fleischmann was first elected to the State House in 1994, after winning a six-way primary to become the Democratic candidate. He has held the seat for 12 terms. 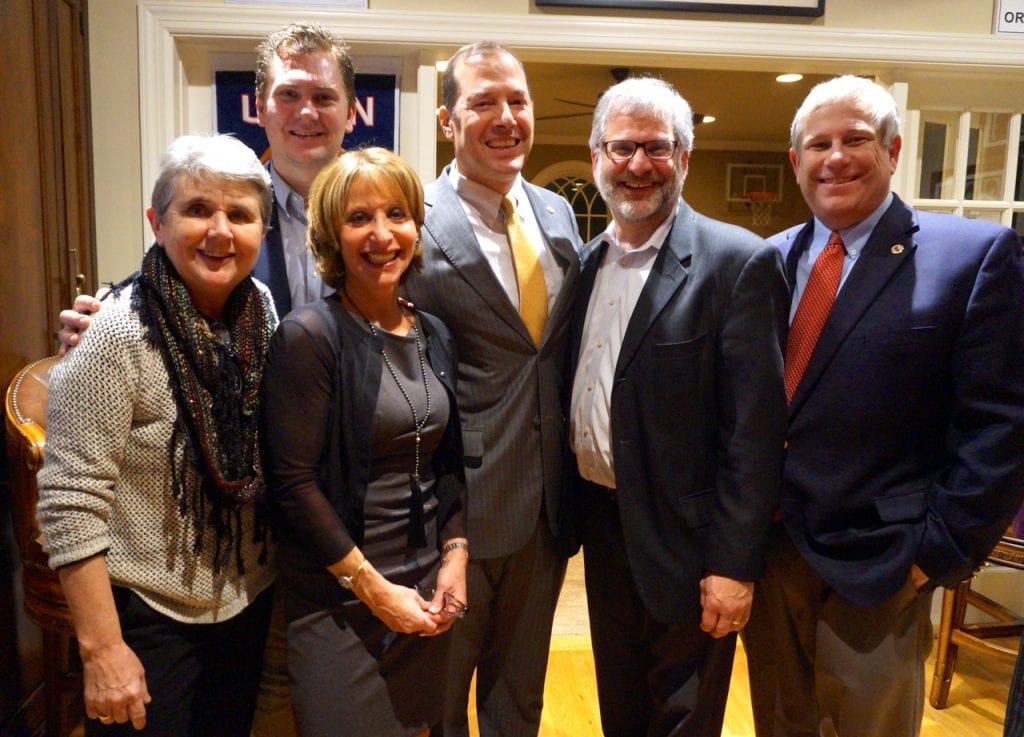 Fleischmann’s announcement and fundraiser was attended by a host of top Democratic leaders from throughout the region, members of the West Hartford Town Council as well as Department of Revenue Services Commissioner Kevin Sullivan, former Secretary of State Miles Rapoport, House Majority Leader Matt Ritter, and House Speaker Joe Aresimowicz.

Cantor introduced Fleischmann, whom she first met when he was campaigning during that primary in 1994.

“He has been an incredible advocate for all of us,” Cantor said. “For West Hartford, for women, for health care, for the democratic rights of all of us in our community.”

“This is the kind of leadership we need,” Cantor said. “He has been an incredible supporter of democracy.”

West Hartford really felt the impact of the past year’s budget uncertainty, and Andy was always available and a great help to town leaders, said Cantor. “West Hartford is a very diverse community, much more than people might think, and Andy truly understands that,” Cantor said.

“He’s a leader in the legislature and I am glad that he has opted to run again. Twenty-three years of public service is a remarkable amount of time to contribute to your community,” said Cantor.

“Yes, I am running for re-election,” Fleischmann declared, receiving a round of applause from the crowd of about 50 people.

“So what’s going to happen? What’s going on with our state, our region, our town?” Fleischmann said.

“The fact is that we’re doing pretty well,” he said, although “folks from the other side of the aisle” look at things with “doom and gloom.”

There are challenges with long-term pension obligations, but they can’t be addressed by top-down dictates from the governor. “We’re going to succeed by having a governor who works hand-in-glove with partners in the general assembly, and teachers, and state employees to find a win-win … It’s going to take experienced people who are ready to do win-wins.”

It’s necessary to invest in “critical things” like transportation infrastructure, fiber optics, satellite communications, and “making sure that we stay the state that attracts the tech workers that make Hartford the fourth-most appealing tech destination for workers in the country.”

As for the region, “the fate of our community is linked to the fate of Hartford,” Fleischmann said. Higher education in the city, business innovation through start-ups and incubators that create vitality and economic growth, and being “welcoming not just to new workers and young workers but to immigrants” are keys to success.

“West Hartford remains one of the best towns to live in anywhere in America,” Fleischmann said. “We have great town leadership … but we have to make sure that as a state we do what’s necessary to support West Hartford … We are a diverse community that needs state support and by any fair measure deserves that support.”

He said that communities that have proven success should be supported and protected, not attacked.

“We’re going to need a veteran team, we have a great team,” said Fleischmann, naming State Sen. Beth Bye and State Reps. Derek Slap and Joe Verrengia. “We are a foursome that knows how to get things done together.”

Fleischmann said that he is totally optimistic about the future of the state, the region, and the community. “We have to make sure we continue to do the work.”

Fleischmann will likely be running in a primary this year for the first time since 1994. Jillian Gilchrest declared her candidacy for the 18th District on Jan. 7, and according to a recent news release has already raised enough money to qualify for the Citizen’s Election Program.

“We live in a democracy. If someone wants to primary that’s their right,” Fleischmann told We-Ha.com after the announcement when asked about Gilchrest’s candidacy.

Fleischmann said he had spoken with Gilchrest before she made her announcement. “I asked her to please tell me the votes you would have cast differently and she couldn’t name a single one … It seems to me we have a candidate searching for reasons to run,” he said.

“In a democracy the voters will say who they think is most helpful,” said Fleischmann. “I happen to think that my experience at the Capitol will be helpful to us in difficult budget times, and one of the central reasons I’m running is that we have to protect our town and that would be difficult to do without some relationships and seniority. But the voters will decide.”