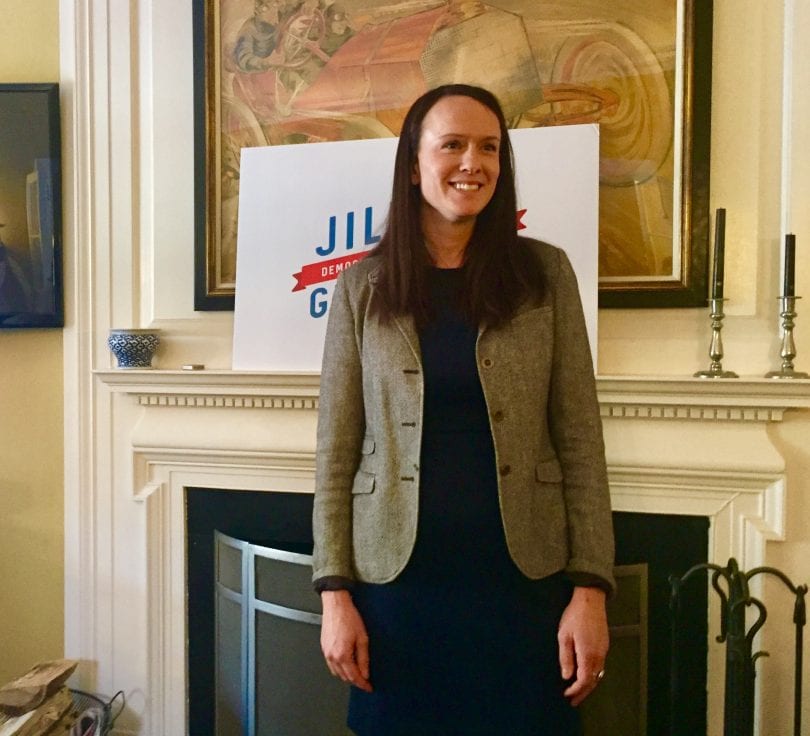 Democrat Jillian Gilchrest kicked off her campaign for the State Legislature on Sunday.

Jillian Gilchrest announced her plans to run for state representative in the 18th district on Sunday, vowing to bring fresh ideas to the legislature and to fight for social change.

“Our state is in trouble and I want to be part of the solution,” Gilchrest said in an interview prior to her announcement. 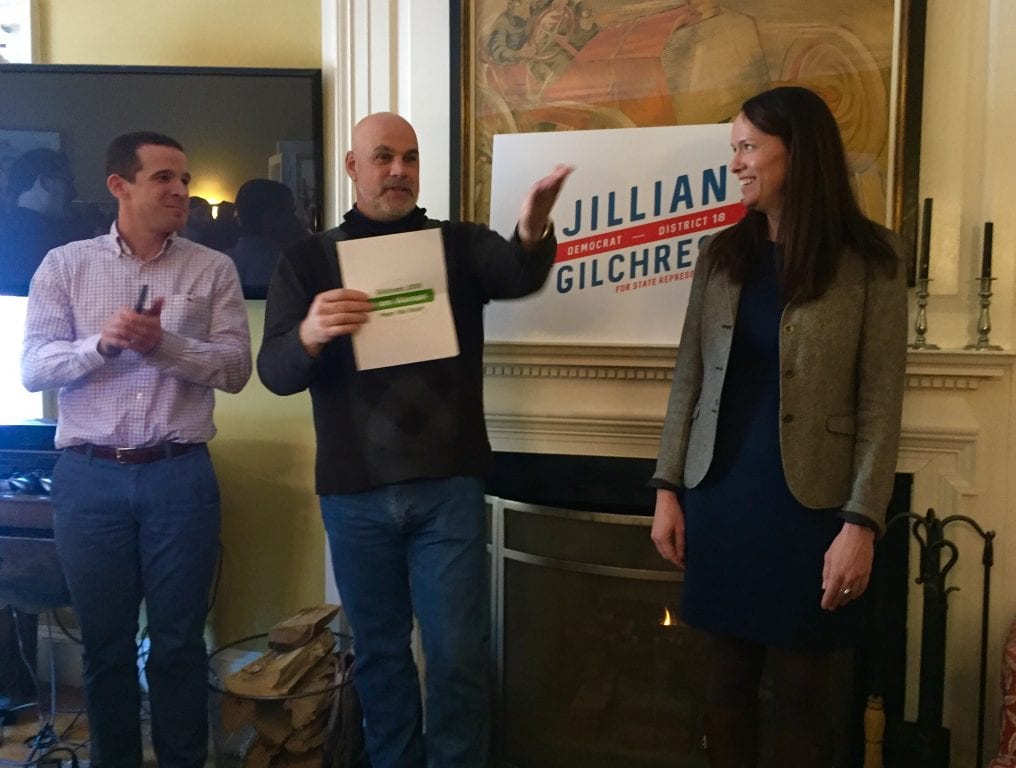 Jillian Gilchrest (right) is announced as a candidate for the 18th state house district by John Lyons (center) who held the event at his home. At left is Jillian Gilchrest’s husband, Evan Gilchrest. Photo credit: Ronni Newton

At a kick-off event held at the West Hartford home of John and Jessica Lyons, Gilchrest, a Democrat who formerly served on the West Hartford Board of Education, told the crowd that she has become increasingly frustrated with the existing administration, including legislators from her own party who have been busy posturing and playing the “blame game” rather than working to make structural changes and advance the social issues she believes are important.

“Our democracy is broken and we need a shot in the arm,” said former West Hartford Board of Education Chair and UConn Hartford Campus Director Mark Overmyer-Velazquez, speaking at the kick-off in support of Gilchrest. “Who better to do that than a kick-ass woman.”

Gilchrest, who has a masters of social work in policy practice from UConn and is currently adjunct faculty, works as director of Health Professional Outreach at the Connecticut Coalition Against Domestic Violence. She is co-organizer with Women’s March Connecticut.

Gilchrest told We-Ha.com that the legislature needs new voice – female voices – and that she is ready to run, and to support many of the social issues that have been getting blotted out by the budget.

Gilchrest said she had informed Fleischmann of her desire to run for the seat two years ago and again in November 2017. She said she didn’t know for sure if he planned to run again in 2018, but in any case was prepared to collect signatures for a primary which would be held on Aug. 14.

“This is a democracy,” Gilchrest said of her decision to challenge an incumbent. “I can participate.”

Gilchrest told We-Ha.com that she is very concerned about the state’s economic future. Fresh ideas are needed, and there is a need for legislators who are forward-thinking and ready to take action and make structural changes, to offer new and different ideas.

The state’s problems didn’t happen overnight, Gilchrest said. They took years, decades to develop. “But the truth is that Andy has been our state representative since 1995 and has voted on every single budget since then. We need change, and the the unfortunate reality is that things are going to get worse before they get better,” she said at the kick-off.

“We need commonsense revenue solutions like tolls,” Gilchrest said. Tax relief is also critical, and she said she favors implementing payroll taxes and eliminating the tax on social security.

“For so many years we’ve just taken band-aid approaches to the budget,” Gilchrest said. “We need vision and structural change.”

Educational Cost Sharing (ECS) – long underfunded in West Hartford according to the state’s formula – needs a new funding formula that meets the needs of students, Gilchrest said. ECS, along with social justice issues like paid family and medical leave, access to reproductive healthcare, sensible gun policies, and prevention of gender-based violence, are some of her priorities.

“We need more women in office,” Gilchrest said, generating cheers and a round of applause at the kick-off event. “Our state it in trouble and I want to  be part of the solution.”

Fleischmann told We-Ha.com in a phone interview on Sunday that he had not yet made his decision about seeking re-election for a 13th term.

“This is a democracy. If she wishes to run I support that,” Fleischmann said.

He said that after speaking with Gilchrest several months ago, he did find it surprising that she decided to run. “When we met I asked her if there were any votes that I cast that she would have voted differently and she said no,” said Fleischmann.

A Republican candidate for the 18th district has not yet been announced. 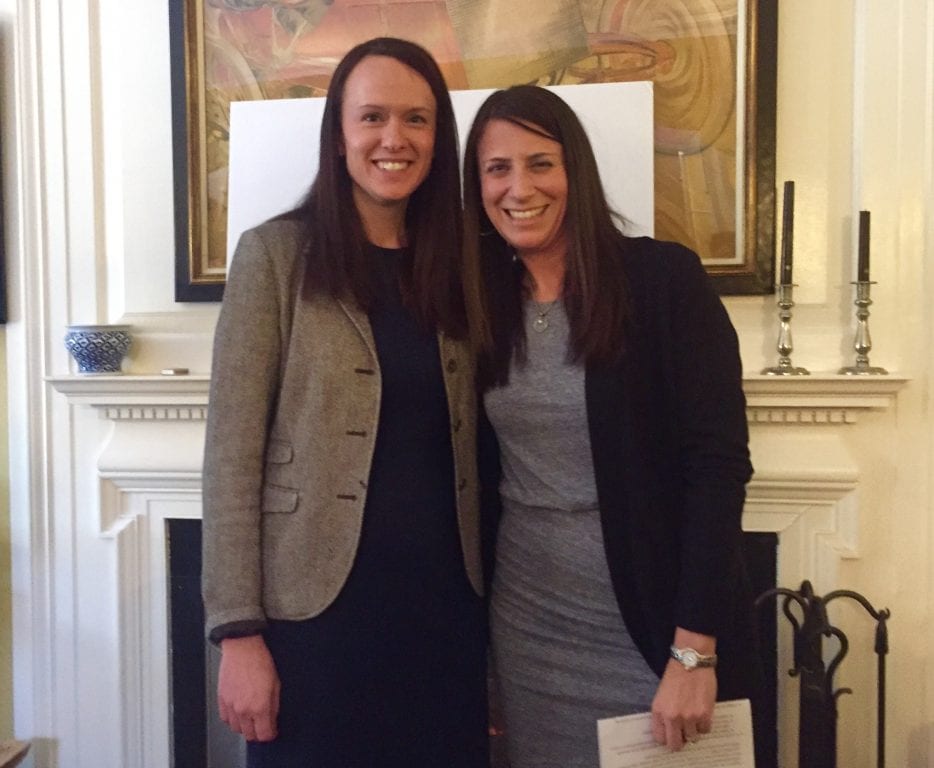