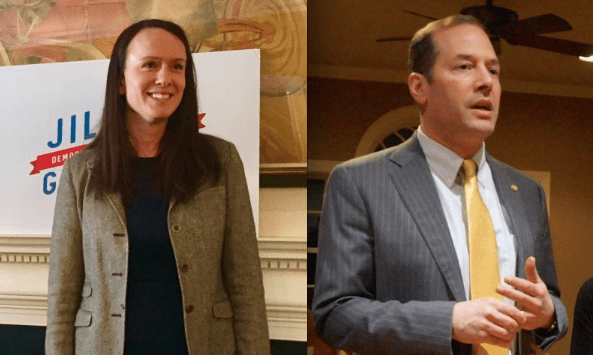 Jillian Gilchrest (left) will be on the ballot for a Democratic primary for the 18th State House District on Aug. 14, facing incumbent Andy Fleischmann. Photos by Ronni Newton

Jillian Gilchrest will face incumbent Democrat Andy Fleischmann in a primary on Aug. 14, 2018.

Jillian Gilchrest needed just 350 signatures – 5 percent of registered Democrats in the district – to qualify to run in a primary this August against 18th District incumbent Democratic State Rep. Andy Fleischman, and on Thursday night was advised that she would be on the ballot.

According to Gilchrest, a petition with more than 500 signatures was submitted to Democratic Registrar of Voters Gail M. Crockett for verification on Tuesday, June 12. Based on a list provided by the registrar, Gilchrest said that 463 were believed to be registered Democrats.

Gilchrest said she received the following confirmation from Crockett via email on Thursday evening: “Ms. Gilchrest has achieved the required 5 percent number of signatures from electors on the active enrollment list to qualify for ballot access regarding the August 14th Primary.”

“We’ve heard from families and voters across the district and they want change,” Gilchrest said Sunday. “They want a choice this August and my team and I are happy to give them one. We are excited by the support and to keep building our momentum straight to the polls on Aug. 14!”

Gilchrest, 36, announced her plans to seek the Democratic endorsement on Jan. 7, and vowed to primary if she was not endorsed. She has a masters of social work in policy practice from UConn and is currently an adjunct faculty, and works as director of Health Professional Outreach at the Connecticut Coalition Against Domestic Violence.

On May 24, the Democratic Town Committee endorsed Fleischmann by a vote of 18-5.

In January, Gilchrest told We-Ha.com that she believes fresh ideas are needed, along with a greater focus on social change. To right the state’s economy, she said, there is a need for legislators who are forward-thinking and ready to take action and make structural changes, to offer new and different ideas.

After receiving the endorsement last month, Fleischmann, 54, who also serves as the president and CEO of Nutmeg Big Brothers Big Sisters, pledged a continued commitment to social justice, equal rights for all, and strong leadership for West Hartford. He also noted that “West Hartford needs the experience and tested leadership I can provide” in vying for limited state funding dollars.

Fleischmann said Sunday that he was not surprised that Gilchrest had received enough signatures to get onto the ballot. “It has been my assumption all along that there would be a primary this August,” Fleischmann said. “I look forward to a vibrant debate and a good turnout.”