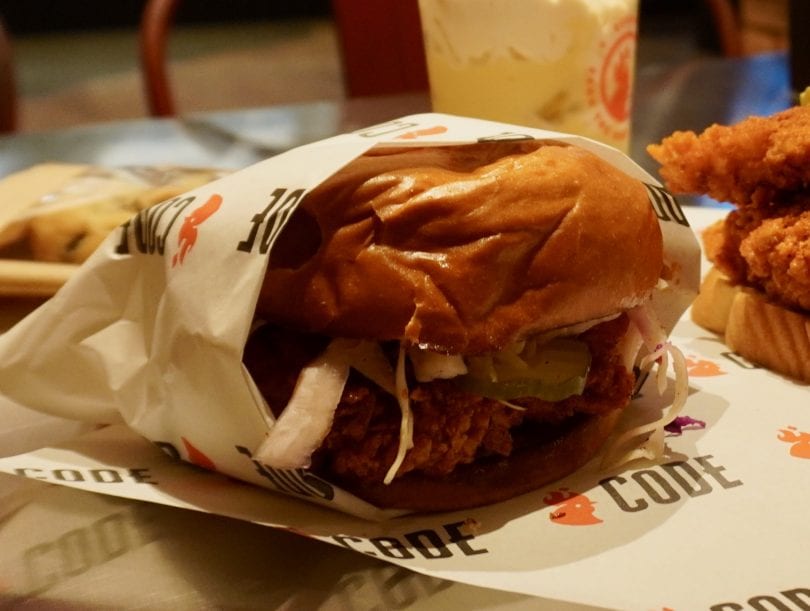 Nashville Hot Chicken will be part of the West Hartford dining scene with the opening of BIRDCODE on Park Road on Nov. 21. 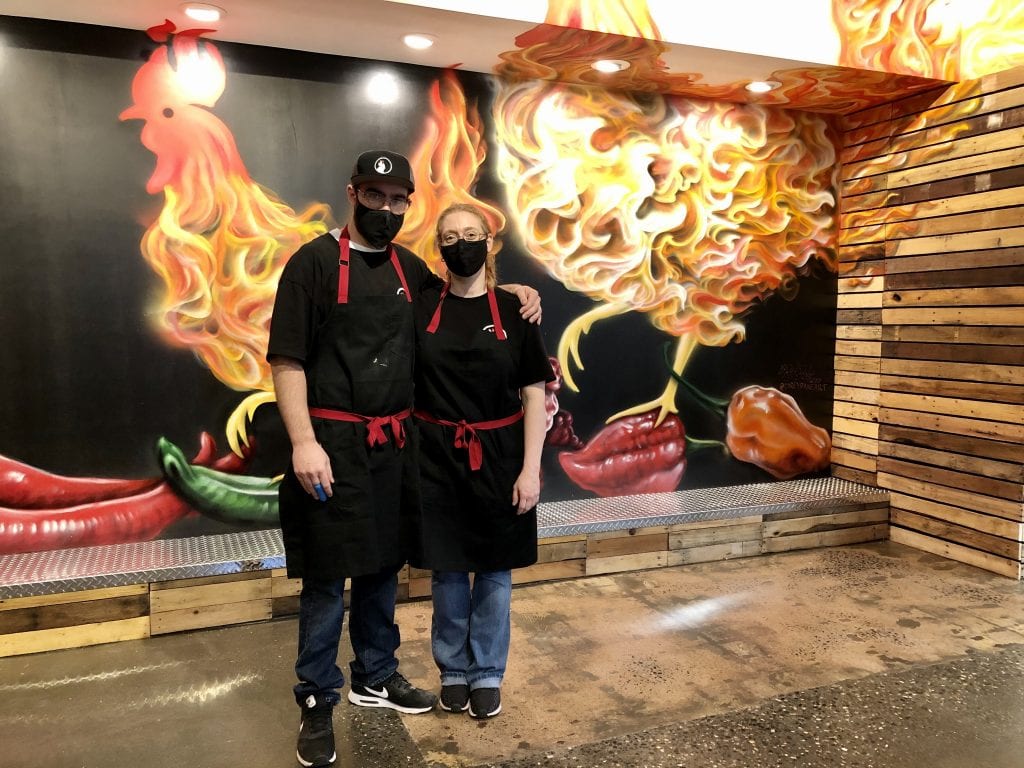 While some local restaurants may serve a version of “hot chicken,” that can be very different from true “Nashville Hot,” which is not a trademark of a chain but rather a culinary style, Phil said.

“We’re upscaling fast food,” said Phil. And while the “code” itself doesn’t technically pertain to the food – but rather the values the Killorans bring to their business philosophy – it underlies everything about BIRDCODE.

“People, quality, and community,” Brandi said. “That’s the code we operate our business by. It’s internal for us, the relationships we cultivate.”

Phil said the food business is really about people, and BIRDCODE will strive to be part of the community in every possible way. They have also taken extensive measures to support other local businesses, and to make the restaurant as COVID-safe as possible.

The second part of the BIRDCODE’s tagline – Fear the Heat – is also key. The authentic Nashville Hot Chicken, with BIRDCODE’s signature touches, can be ordered in heat levels from mild through “code breaker.” Actually there’s also a “country” level, with flavor but no heat, but that may defeat the “hot chicken” intent.

“BIRDCODE is my husband and my concept, that we came up with out of our love for hot chicken,” Brandi said.

The couple has more than 20 years experience in the restaurant business, and for seven years owned the largest Ben & Jerry’s franchise in the state – which included all of the shops other than the one in West Hartford Center. They sold that business in 2015, and decided to pursue their “passion project,” Phil said.

“Since I was 18, I’ve wanted to own my own restaurant,” said Phil, who grew up in West Hartford and graduated from Conard High School.

They traveled the country, sampling more than 20 other Nashville Hot Chicken places. “We fell in love with Hattie B’s,” Brandi said of the iconic and immensely popular Nashville-based and family-owned restaurant.

“We thought it needed to be here,” she said. 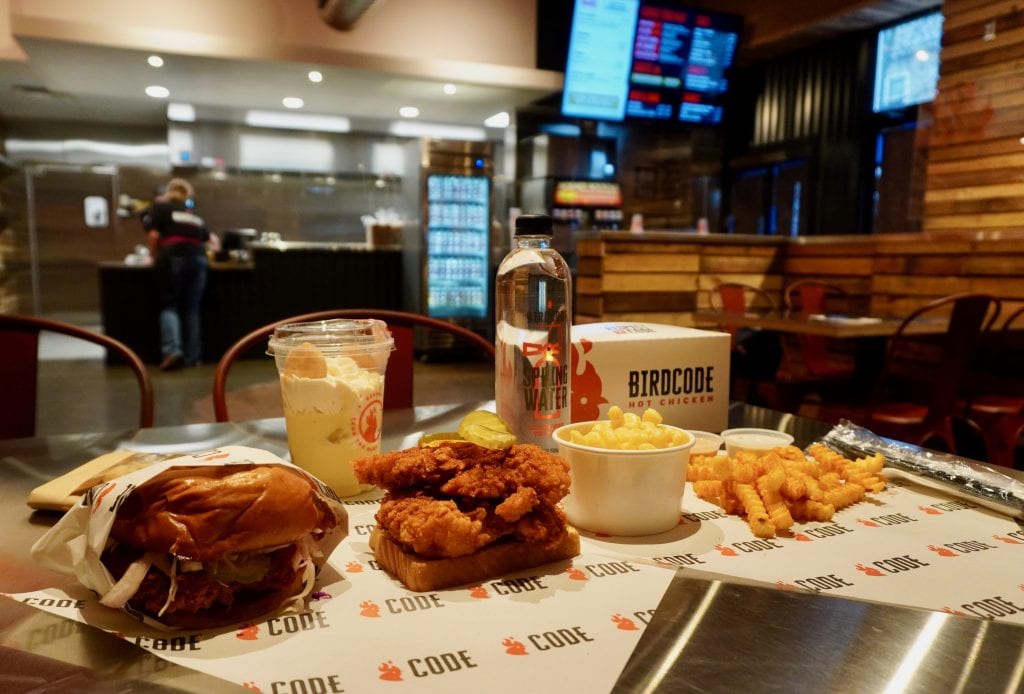 The Killorans spent more than a year doing some serious taste testing to get their chicken recipes just right.

While the exact recipe will remain secret, Brandi said that cayenne pepper provides the main base of the mild (which is described as “A touch of heat. All systems go”) as well as the medium (“Starting to feel the burn. Proceed with caution”) versions.

“Burn baby burn. Hot to trot” describes the “hot” – with that heat coming from habanero and ghost peppers.

The “code breaker” carries a warning: “Do you really want to do this? Eat at your own risk.” The heat comes from the Trinidad Scorpion pepper, which is just about the hottest pepper on earth, Brandi said. Only the Carolina Reaper has been rated hotter on the Scoville Heat Units (SHU) scale.

The generously-sized chicken sandwiches ($7.99), called “Sandos,” are served on a brioche bun with slaw, pickles, and comeback sauce. (Sauce that makes you want to come back for more.) Buttermilk ranch and cheese sauce are also available. 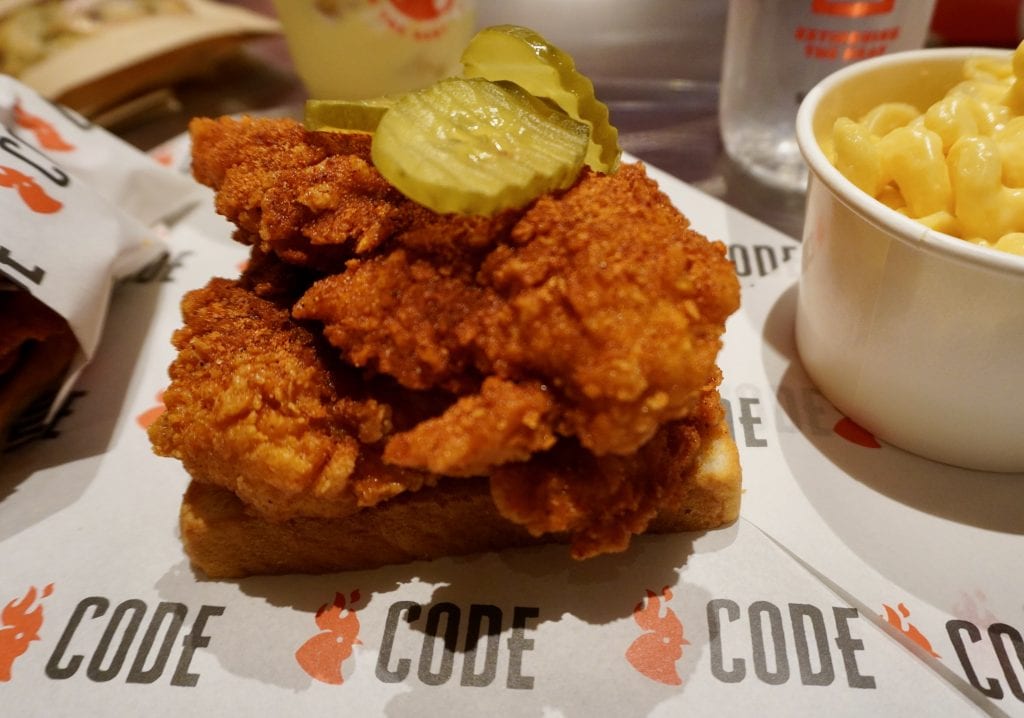 Tenders from BIRDCODE, topped with pickles, are available at the same heat levels as the Sandos. Photo credit: Ronni Newton

Sides include mac and cheese, fries and spicy shake fries, slaw, and pickles. 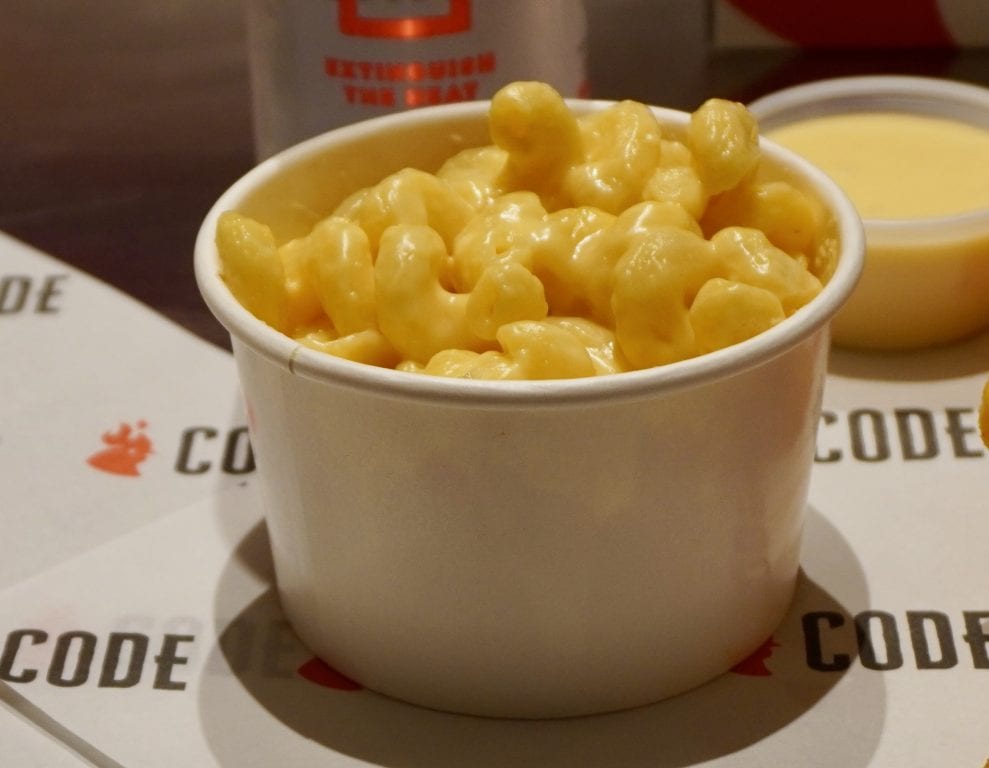 Brandi’s roots are in the south, and that comes through in the menu. A native of Tallahassee, FL, she’s appropriated versions of many of her mom’s family recipes for BIRDCODE.

“It’s my mom’s banana pudding, mac and cheese, and cheese sauce,” she said. “The vinegar slaw, that’s all mine. … No mayo in the slaw.”

The chocolate chip cookies are an obsession, Brandi said. “They’re my mom’s recipe, with a twist,” she said, and were inspired by the cookies at New York’s famed Levain Bakery. 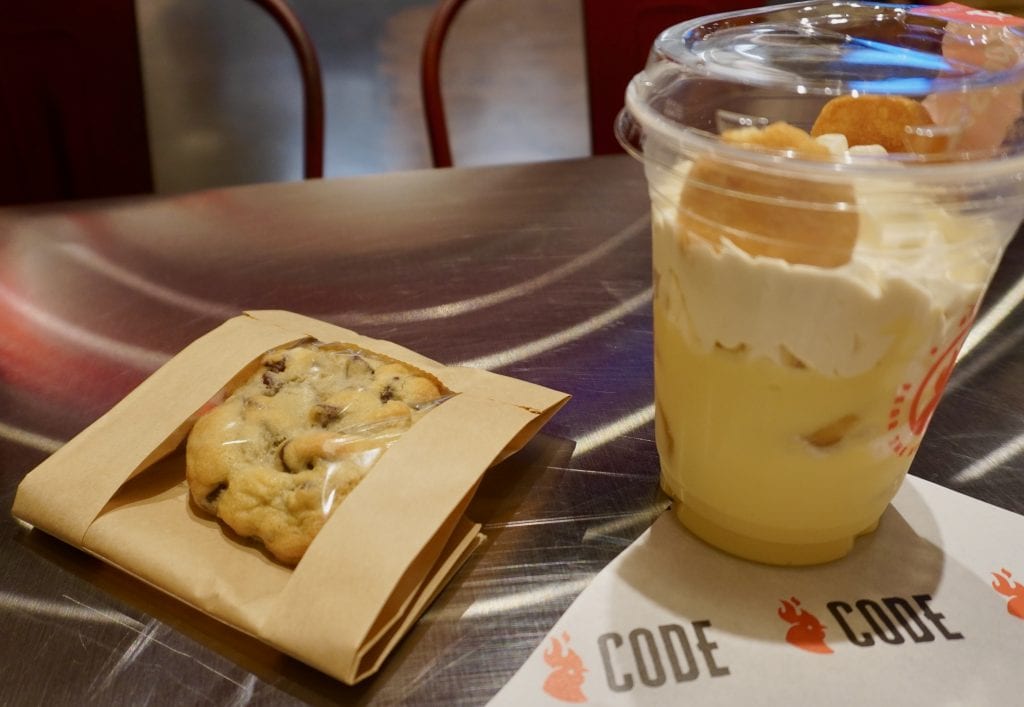 Everything is made from scratch, Brandi said. The pudding is made from real bananas and house-made custard. The freezer is only used for the fries, which along with the buns, bread, and beverages are the only things not made in-house.

The sodas are from Hosmer Mountain, using pure cane sugar and no artificial ingredients. They’re served in compostable cups topped with sip lids. “We don’t like straws,” Brandi said.

In addition to milk and sweet or unsweetened tea, cold beer is a great complement to hot chicken. BIRDCODE will have four beers are on tap at any one time, with an emphasis on local, including-up-and coming breweries.

The initial offerings will include Fiddlehead IPA, Relic, Back East Brewing Porter, Lawson’s Super Session, and Zero Gravity Green State Lager. New England Cider Company’s Half Blueberry will also be on tap, as will a white wine that pairs well with the chicken. There will also be 15-20 beers as well as wine available by the can.

“We focus on value-led sourcing,” Phil said. The chicken is all Bell and Evans, the dairy is from Mountain Dairy Farms, and the produce is procured from local supplier Sardilli’s. The bottled water is from New York-based The Water People, but virtually everything else is from Connecticut, including the boxes and the uniforms that were purchased right on Park Road.

They installed the reclaimed wood that covers the walls themselves, and the metal furniture is all hand-crafted and custom-made. 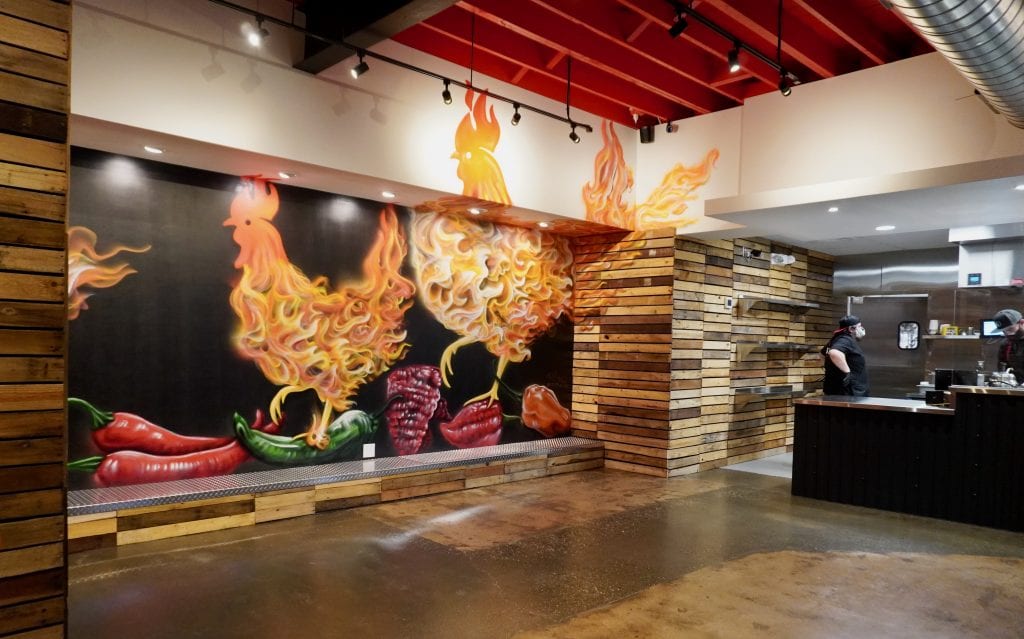 West Hartford artist Corey Pane – perhaps best known for his creation of the Nipsey Hussle mural in Hartford, rapper Juice WRLD’s album cover, and for creating customized painted cleats for NFL players and other athletes – was hired to create a giant mural of a “hot chicken” and some of the peppers used in the recipes. The vibrant mural adorns one wall of the restaurant, and Pane also created several smaller images in the space including one on the ceiling of a restroom.

Brandi said she shared their vision and some images of peppers, and Pane did the entire mural freehand, using spray paint.

Nashville Hot Chicken is messy, and the plumbing is ready for the installation of a communal hand washing station. The Health District has said the station itself will have to wait until post-COVID, so for now, multiple napkins will have to suffice.

The Killorans have been working toward their opening day in the former Zero Degree Thai Ice Cream space for about a year and a half. Initially they were going to open their tenderwings concept in the space and locate BIRDCODE elsewhere in West Hartford but – in part because of COVID-19 – the hot chicken concept seemed the right fit for the Park Road space.

Whether you are dining inside or getting food to-go, everything is served in a takeout box. “It’s 100% COVID-safe,” Phil said. The Nashville Hot Chicken concept is ideal for to-go and delivery. 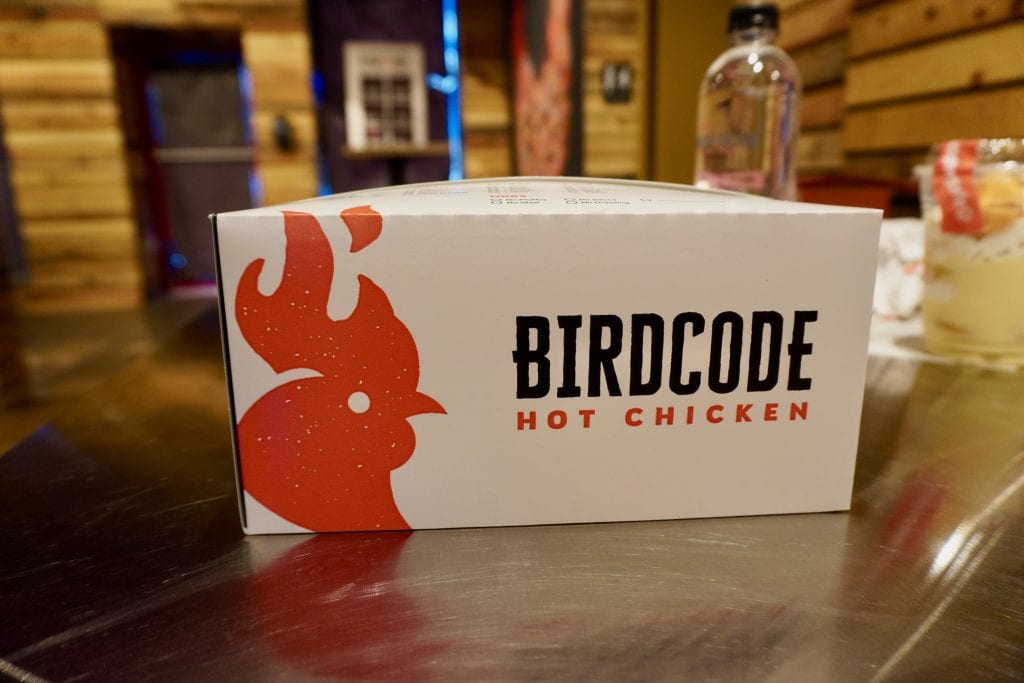 Ordering can be done online as well as through the soon-to-launch BIRDCODE app, and direct delivery (as well as delivery through various services) is also available.

“If you place your order online, you don’t even need to come into the store,” Phil said. They were able to work with the town to receive a permit for a pick-up window for mobile orders, but he noted that orders cannot be placed at that window.

For those ordering and getting food to go inside, the line is separated from the dining area by plexiglass.

“We want to be sure people can get their food however they want – safely,” Brandi said.

With Phase 2.1 restrictions in place, BIRDCODE safely seats 18-20 people, at easy-to-clean stainless steel tables that are spaced much farther apart than the COVID-required 6 feet of physical distance.

Once restrictions are lifted, there will be seats for 45 inside.

There’s a patio as well which will eventually be able to provide additional seating for about 30 people.

BIRDCODE has 30 employees, about half of whom are local teens. Many of the employees are able to walk to work, Phil said.

BIRDCODE will be open Tuesday through Sunday from 11 a.m.-9 p.m., and closed Mondays for now. The hours will eventually be expanded.

With the opening of BIRDCODE also comes the launch of tenderwings, a chicken tenders delivery-only business which will be run from the same kitchen on Park Road.

Once the business gets going, the Killorans plan to actively support community organizations, particularly education. “We strive to be part of the community in every possible way.”

The websites will be activated on opening day.

For more information about BIRDCODE, or to place an online order, visit eatbirdcode.com or email [email protected]. 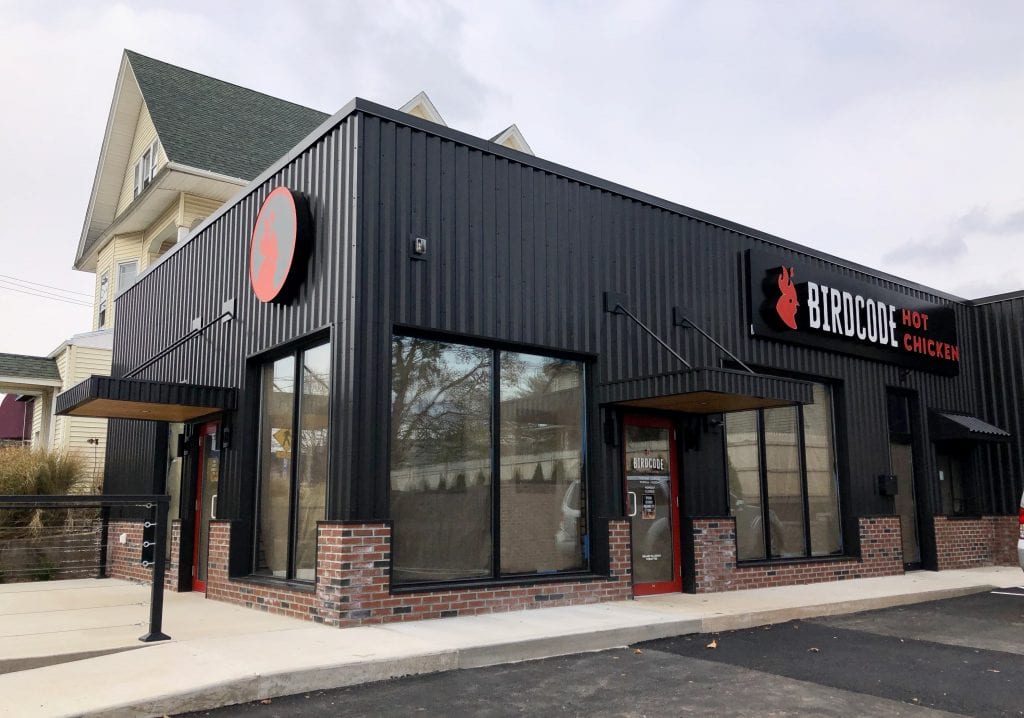 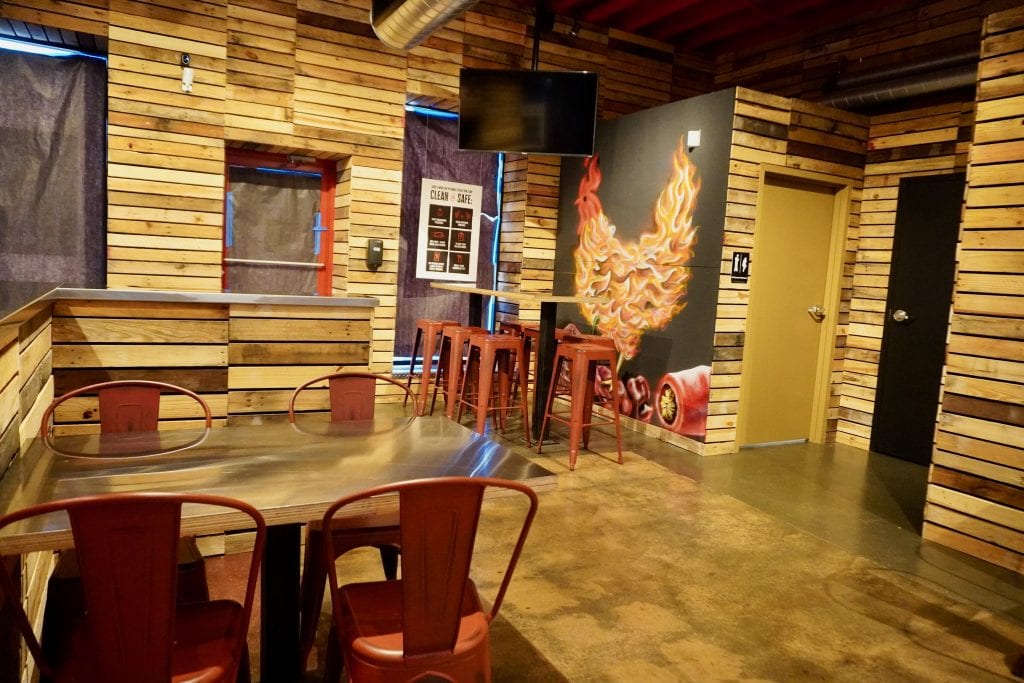 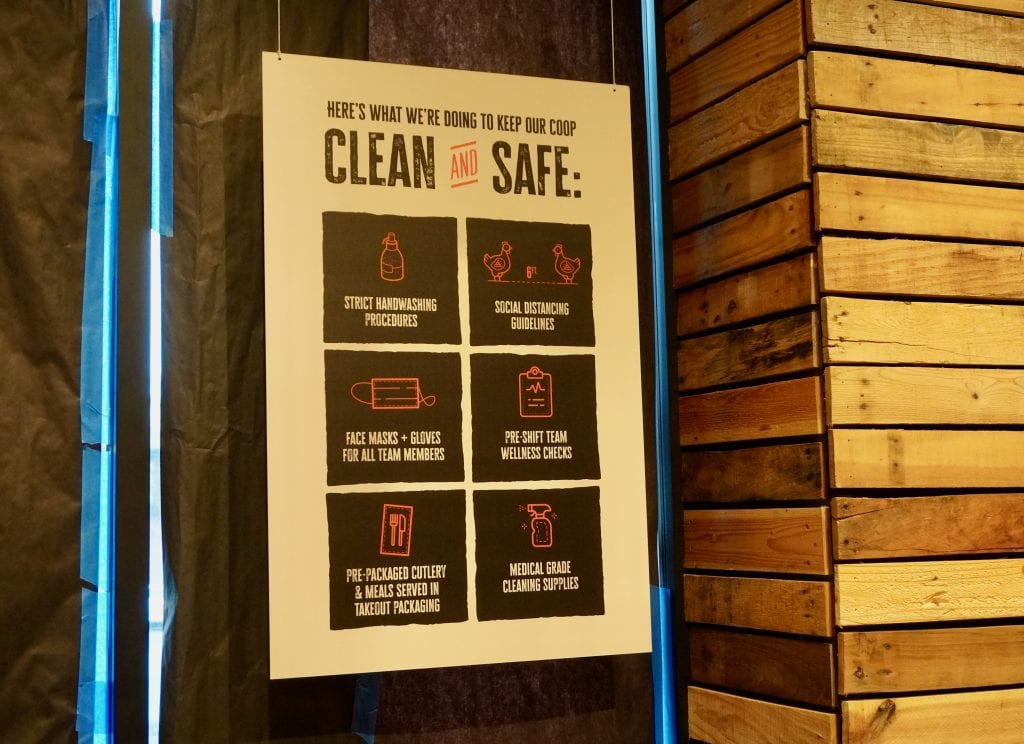 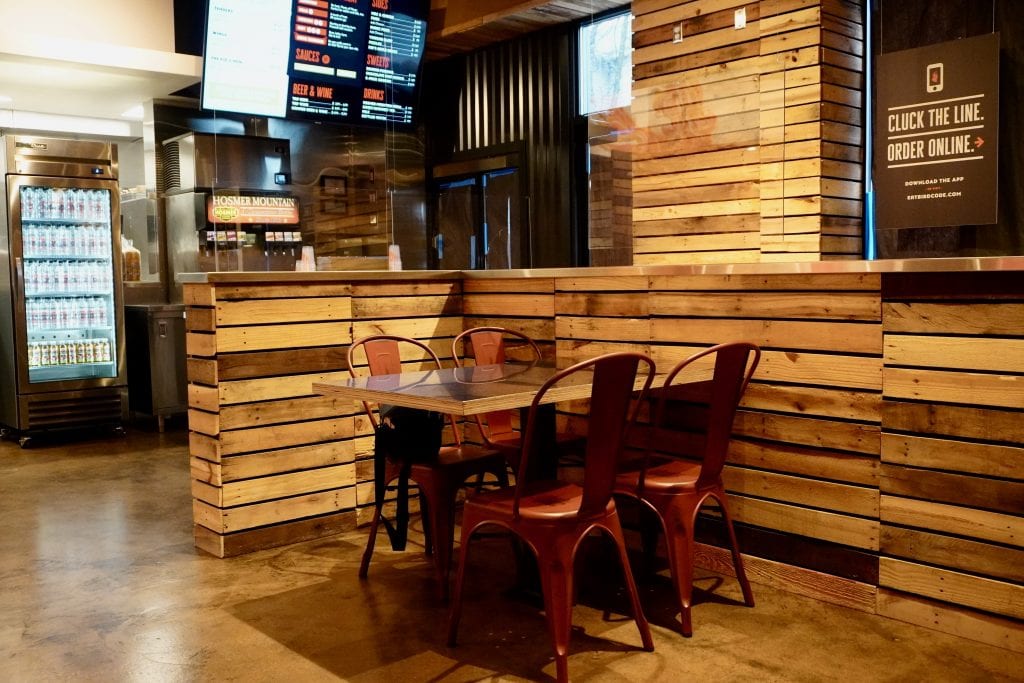 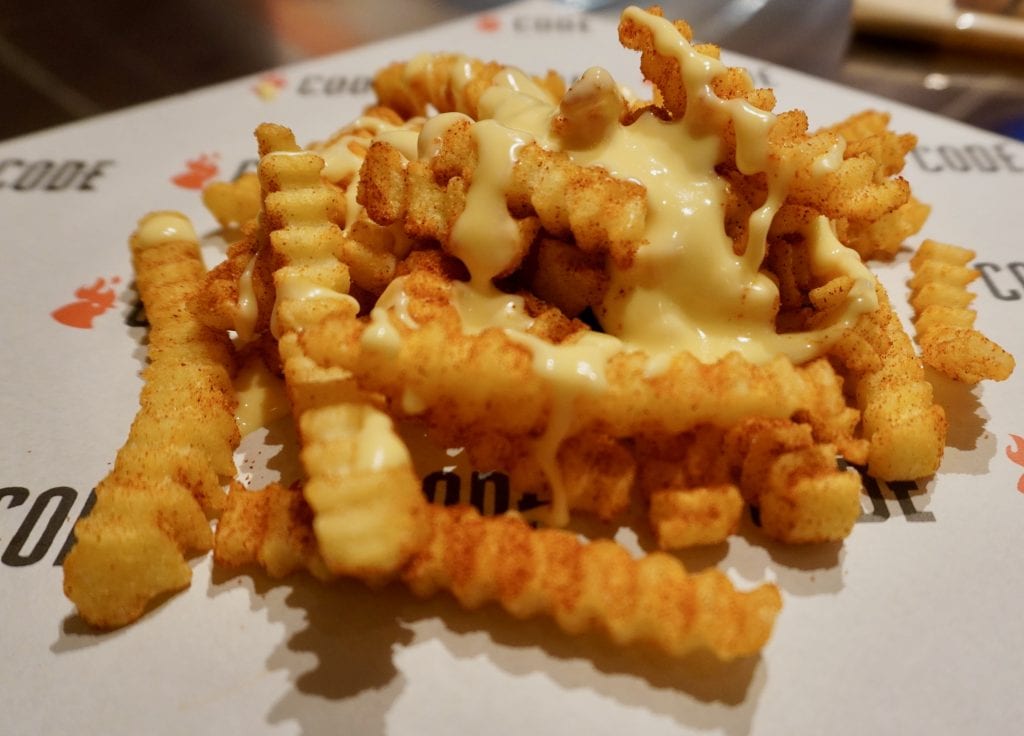 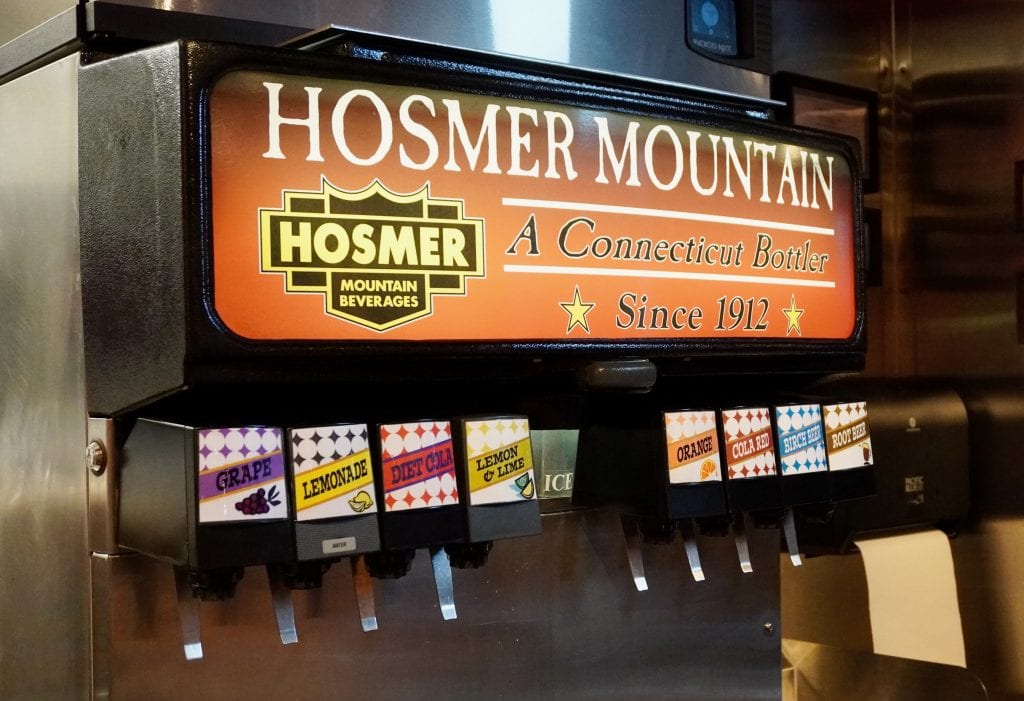 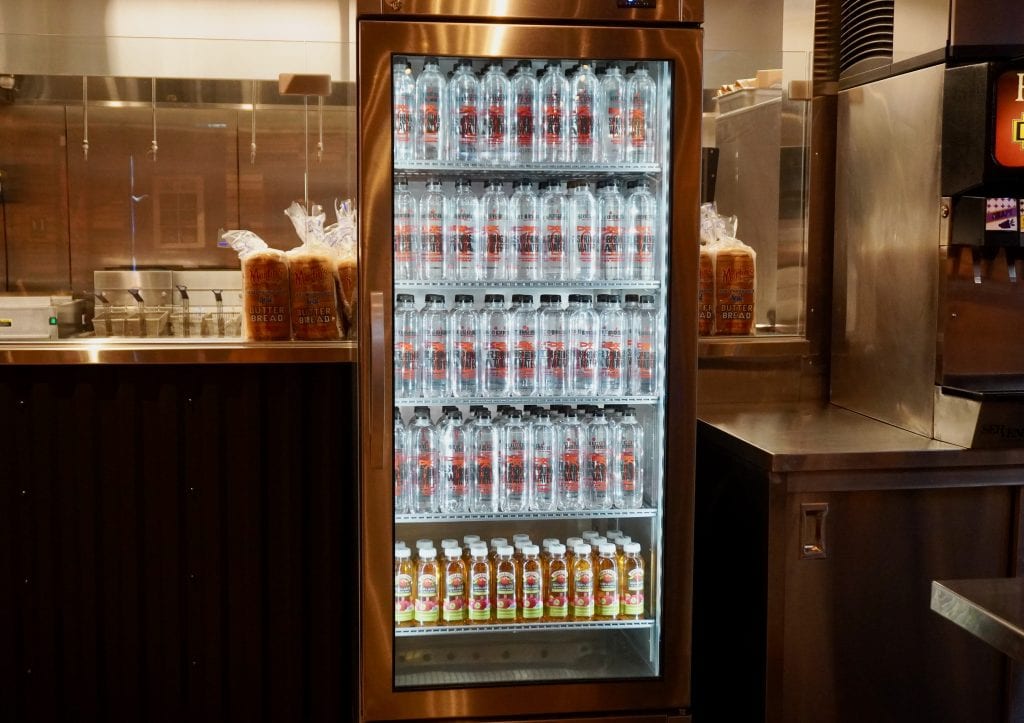 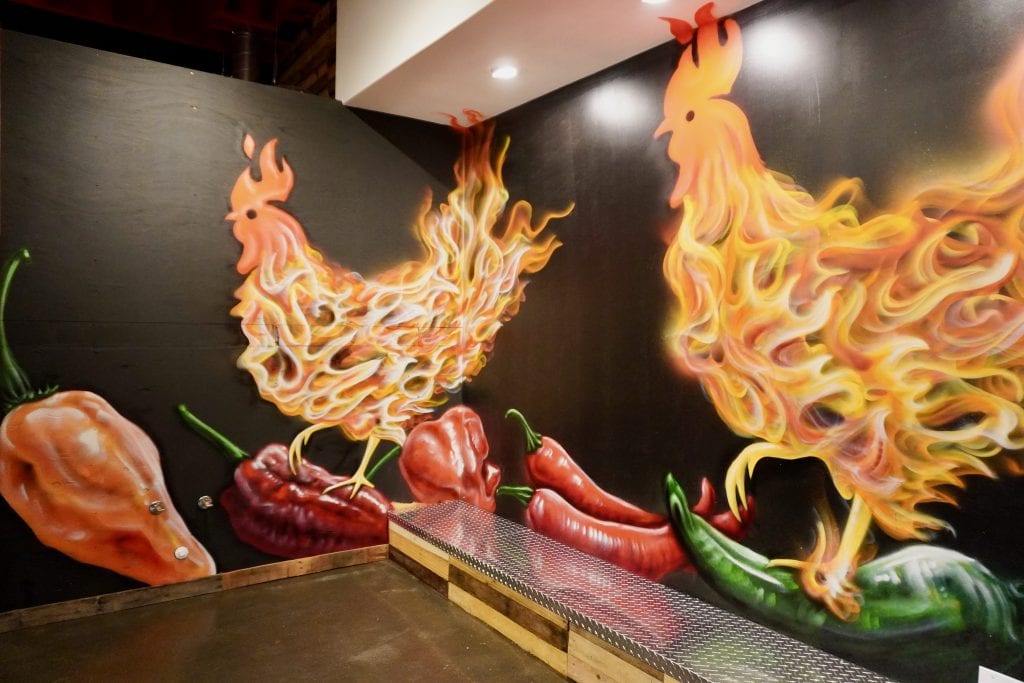 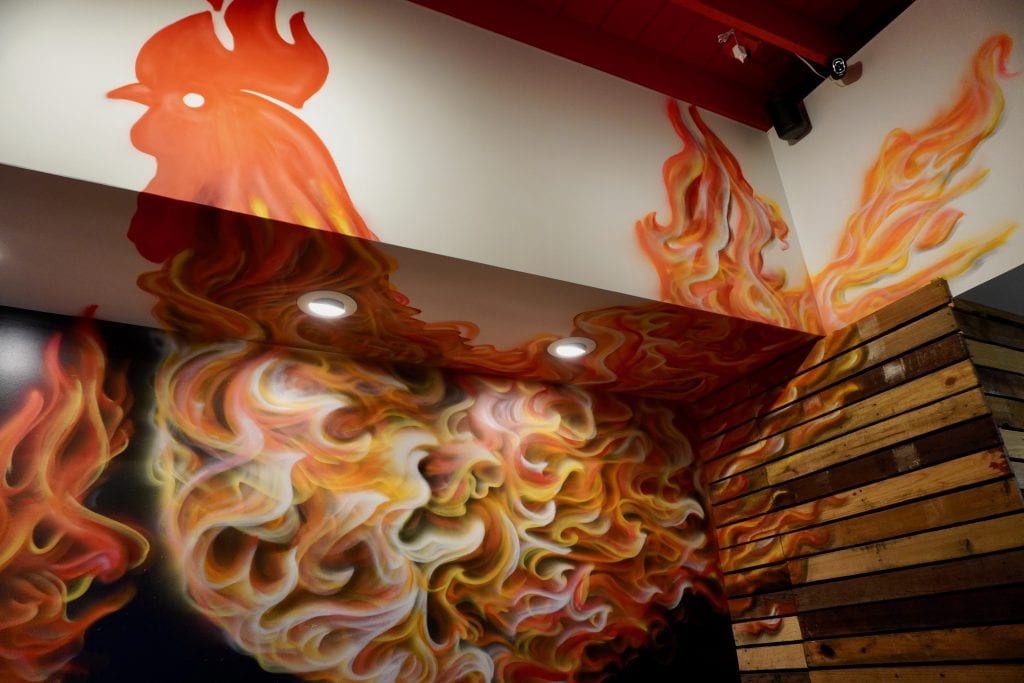 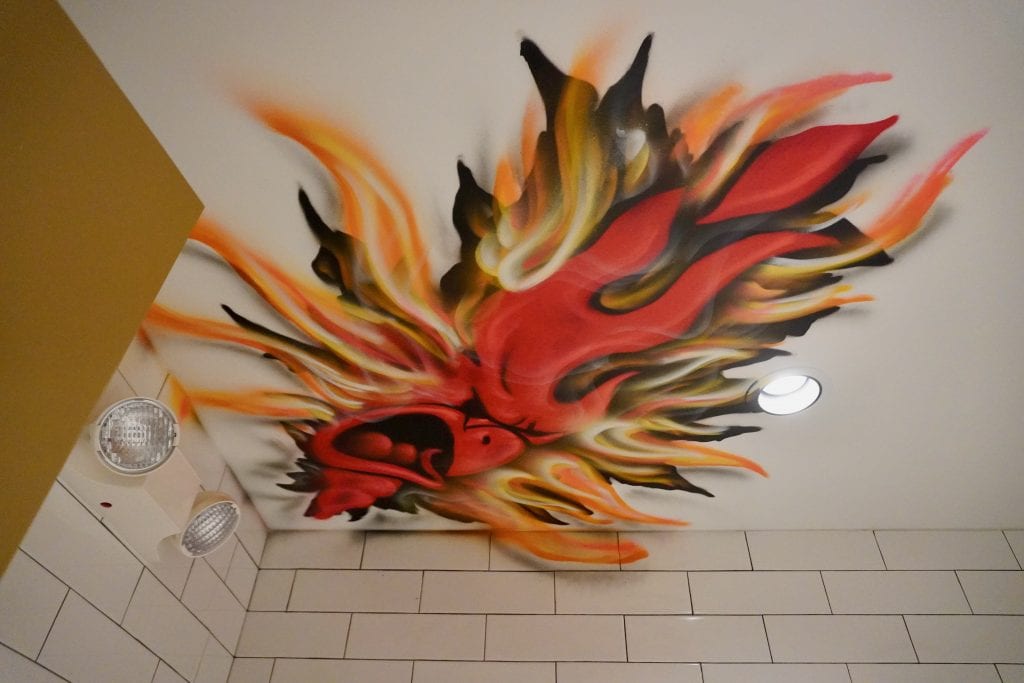 In addition to a large mural, West Hartford artist Corey Pane added several small murals, including this one on the restroom ceiling. Photo credit: Ronni Newton