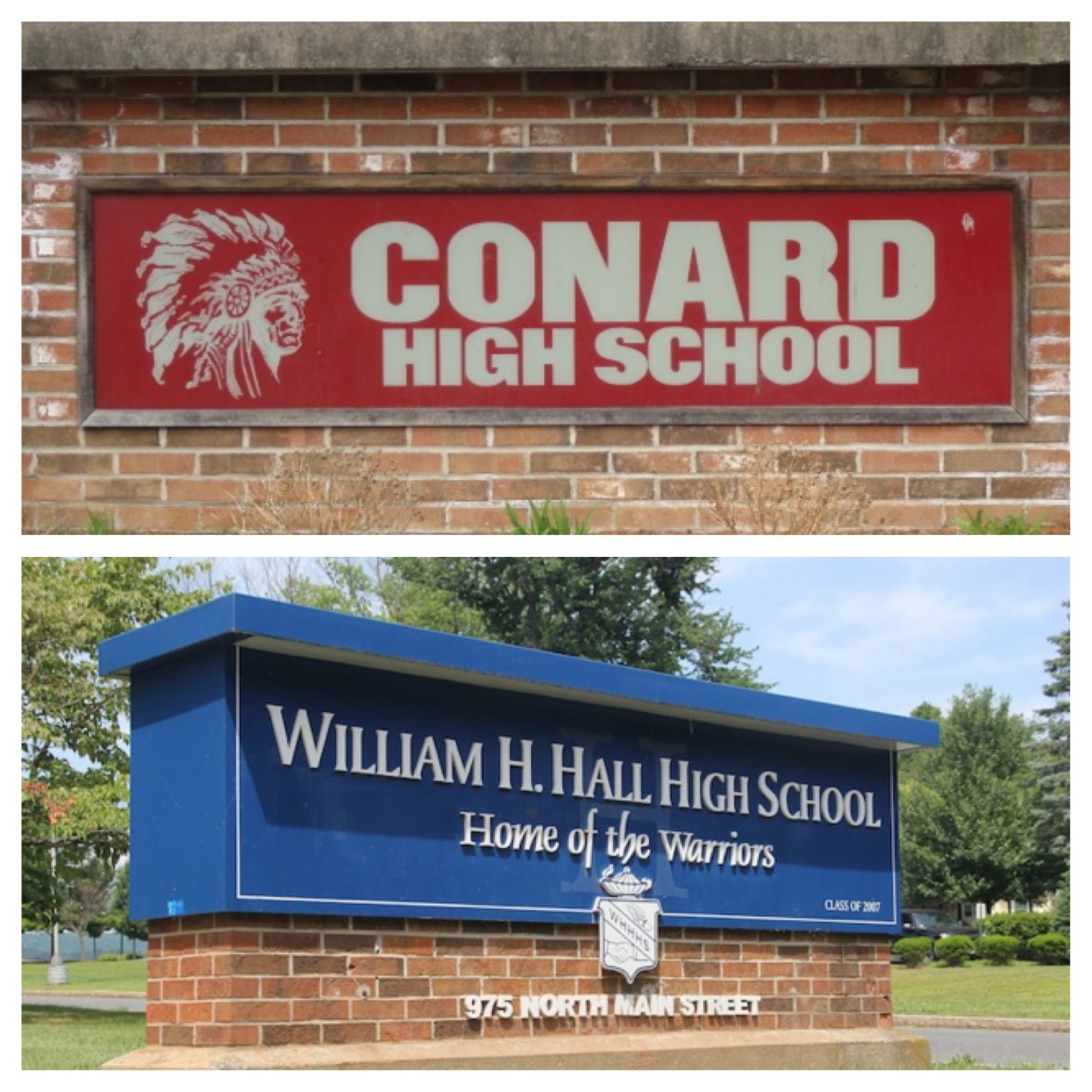 The West Hartford Board of Education had a second and final reading followed by a vote on the policy change regarding school names, mascots, symbols, images, and nicknames that was approved last week. 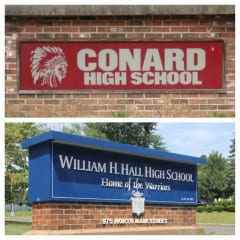 Under the Board of Education’s new policy, the Coanrd sign (top) will need to be replaced at some point.

The West Hartford Board of Education voted to approve a policy change that advanced to a second reading after voting took place at last week’s meeting, and also approved creation of a committee to develop official school images for Conard and Hall high schools that will be funded by the board.

The wording of the policy change (see below for complete text), prohibits “the use of mascots, symbols, images, or nicknames that are directly related to or commonly associated with any particular race or ethnicity,” but at the same time permits Conard to remain the Chieftains and Hall to remain the Warriors.

Resident and Conard parent Diane Duva spoke before the board voted asking for clarification of the policy which she said “does not mandate the retention of the mascot names for Conard and Hall.” Duva asked the board to modify the policy so that the schools would be free to change the names if that’s what the committee decides.

Board member Bruce Putterman, who introduced the motion, clarified that such a change was not needed because the policy doesn’t state that the names must remain, only that they are not prohibited. Although he said that based on the public opinion he doubts that the school nicknames will go away in the short run, “from my perspective there is no mandate to keep Chieftains and Warriors.” Putterman said that he’s hopeful that eventually students and their adult leaders will “engage in this conversation in the future.”

Hall student representative Paul Zeuschner said that with everything that has happened, “I have not been proud to be a Warrior this year.” He said he’s afraid that just changing the logo won’t have much impact, and also fears that the Conard student fan group – “The Tribe” – will go “underground” rather than remaining an official school club and will retain its name and Native American imagery, just like Hall’s student fan group, “The Reservation,” has done.

Board Chairman Mark Overmyer-Velazquez said that he was personally in favor of changing the names, but is hopeful that all will act appropriately thanks to a greater level of education that will be introduced. “That’s not to say that the pervasive images are going to go away. With the hope that with more education, with strong discouragement, that names like Reservation and Tribe [will not continue].”

The administration has the authority to change official names like Conard’s newspaper, the “PowWow,” but not the names of the fan groups unless they are officially-sanctioned clubs.

Board member Jay Sarzen said he’s hopeful that the students will choose to act respectfully, and will in fact set an example for the rest of the United States. “My hope frankly is that West Hartford shows its true colors – how good, how hopeful how forward-thinking we are to embrace these names with pride, with reverence, with respect. I think we need to give our student the lattitude to come up with something that will make us all proud.”

After the board unanimously approved the policy change, they also unanimously approved a motion to create a committee to develop “official school images” for both Conard and Hall. According to that motion, both principals will, “in consultation with the Superintendent, appoint a committee at their school, composed of school administrators, teachers, non-certified employees, students, parents, and other members of the school community, to develop new logos and related images by June 15, 2015, with funding by the Board of Education to engage a marketing or graphic design professional to support this work.”

Board member Terry Schmitt said that the motion creating and tasking the committee breaks a precedent, since the board typically does not direct the principals to do something specific. He asked that they look at the task as an “invitation, not a mandate,” and a way to complete the work done on the policy as quickly as possible.

According to Putterman, several graphic designers have already expressed interest in the project.

Putterman also said that beginning immediately, he expects that any new product funded by or sanctioned by the schools will adhere to the policy. He also urged that any existing imagery – like the feather headdress on one of Conard’s Twitter accounts – that is easy and low-cost to modify, be removed by the beginning of the 2015-2016 school year.

As for the higher cost items such as uniforms and signage, Putterman said that a reasonable timeframe should be established for their replacement.

“I don’t envison that as major cost,” Superintendent Tom Moore said regarding team unforms, since most just have the school names.

The sign in front of Conard, which has a Native American image, will also need to be addressed. Sarzen suggested that replacement be taken care of through private funding rather than through the Board of Education’s budget.

“In order for this to be taken seriously, we need to do it immediately,” said board member Tammy Exum. “Even if we need to pay for it.”

Overmyer-Velazquez said perhaps in the meantime, the image could be covered up “in an aestethically pleasing fashion.”

Complete text of the Board of Education’s new policy:

All school-sanctioned and school-funded mascots, symbols, images, and nicknames shall respect and be sensitive to diverse cultural values and the importance of inclusion.

Therefore, the use of mascots, symbols, images, or nicknames that are directly related to or commonly associated with any particular race or ethnicity is prohibited.

The use of such mascots, symbols, images, or nicknames by independent, non-school-sanctioned clubs and organizations is strongly discouraged.

The Superintendent of Schools will develop and ensure the teaching of a curriculum that enhances understanding of Native American cultures.