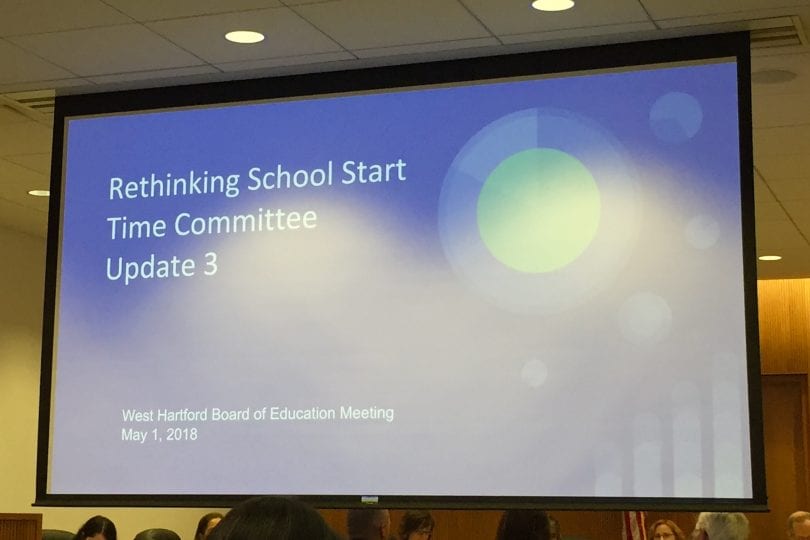 The third report of the ‘Rethinking School Start Times’ Committee was presented to the West Hartford Board of Education Tuesday night, with a reports on the impact on transportation, stakeholders, other town programs, and professional development.

The Rethinking School Start Times Committee reported back to the West Hartford Board of Education on Tuesday night, and the third of three planned presentations about the impact of a later start time focused on transportation issues that could arise, particularly with the private schools that receive bus service from West Hartford, as well as the impact on various stakeholders, other town programs, and teacher professional development.

The Board is in the process of considering an adjustment of school start times, and Director of Secondary Education Anne McKernan, who heads the Rethinking School Start Times Committee, provided results of research from several subcommittees in the last of three formal presentations to the board. The 22-person Rethinking School Start Times  Committee has been meeting since mid-September of 2017.

The Board received its first report in December 2017, and another report on Feb. 21.

On Thursday, May 3, from 7-8:30 p.m., a Parent Information Night will be held in the Town Hall auditorium to solicit feedback, and the Board will evaluate the research at its June 5 meeting and may possibly make a decision at that time about implementing a change  in start times during the following year.

“Our purpose is to research the challenges and benefits of rethinking school start times,” McKernan told the Board Tuesday night, with the overall project grounded in the premise that various medical and psychological organizations believe that there are benefits to a later start, particularly for high school students.

McKernan said that while more detail is needed from the Board regarding specific times that the Board would like school to begin, the subcommittee looked at the impact on transportation under the current three-tier system – where the same buses are used to transport elementary, middle, and high school students – as well as what would happen if the town decided to go to a two-tier system like Newtown has.

“One of the things we found is that we would likely need minor changes to our routes if we changed the order of these buses, but it is not believed there would be major restructuring,” McKernan said.

However, in their research, the subcommittee realized that the town’s nine private schools could have a significant financial impact on transportation costs with revised school start times, even if a three-tier system is maintained. According to Superintendent Tom Moore, state statute requires that the public schools provide transportation to all students living in West Hartford who attend school in town.

“We transport all West Hartford residents to any West Hartford school, whether public or private,” Director of Finance and Planning Chip Ward confirmed.

“If all the private schools shift their starting time … then there would be no impact and everything would just be rotating around,” Ward said. However, if the private schools don’t want to change their start times, the town would have to run eight or nine additional buses, at a cost ranging from $452,000-$510,000 for the year, according to the committee’s report. Buses cost the town $309.95 per day or $56,410.90 per 182 day school year during 2017-18.

“We don’t have the full answer right now, but that’s an impact that could occur if we change the start time,” Ward said. The bus schedule needs to be looked at as a whole system, he said.

Assistant Superintendent for Curriculum, Instruction and Assessment Paul Vicinus said that what the private schools might decide to do is unknown, but the impetus for the schools to also to change their start times “just isn’t there.”

The cost of going to a two-tier system would involve adding at least 79 large buses each day, and could cost as much as $3.1 million per year, the report indicates.

Another transportation-related issue is for eighth grade students who take advanced math or world language classes at the high schools and are currently transported back to their middle schools after the high school first period ends.

McKernan said major transportation impacts are not expected for students in the Open Choice Program, or for field trips or late buses.

Stakeholder engagement efforts are currently underway, with a project website and dedicated email. Information about the committee’s work has been published in school newsletters and in communications from the principals.

A 27-page stakeholder survey was released on April 18, and the survey will remain open through May 15. McKernan told We-Ha.com earlier Tuesday that the survey has been distributed to all parents and guardians, teachers, and support staff in the district, as well as to secondary school students. The total number of surveys distributed is likely more than 10,000, she said, and it has been sent out in English as well as Spanish.

McKernan said that Hanover Research Group is assisting with the survey process, and although she doesn’t know the specific results, she has been informed that more than 5,000 surveys have been returned thus far. Results will be made available before the Board’s June meeting.

The Town of West Hartford Impacts Subcommittee looked at the impact of changing school start times on daycare, recreation, leisure services, the Hillcrest Heights Neighborhood Outreach Center, and other services. There was willingness to discuss among all of these groups, but in order to give more feedback, they wanted more specific information about what the start times would be.

The Professional Learning Subcommittee wanted to ensure that teachers at all grade levels could continue to meet if professional development classes were moved to the morning to accommodate a change in start times. There was “a lot of feedback about preserving what we have in West Hartford,” because it’s such a special program of professional learning. Parent conferences were also a consideration. “They were very protective about all the features that we have,” McKernan said.

The Board had asked the committee to take a deeper look at the social and emotional impacts of later school start time, McKernan said, and there is substantial research regarding the issue. From the articles that committee members read, she said, there were indications that later school start times resulted in benefits including more satisfaction with sleep, improved mood, decreased depressed mood, less daytime tiredness, and decreased health center visits.

McKernan also noted that the committee has continued to look at “lessons learned” from other communities that have changed their start times. She said that Wilton, which made the change 15 years ago, and Newtown, which made the change this year, are reportedly having success, while Greenwich is struggling with the transition. Early dismissals in the fall for athletic contests was a specific challenge, McKernan said.

While there are some reports of increased grades and attendance, Wilton administrators specifically said, “We didn’t do it for that reason,” said McKernan.

In addition, while there may be some benefits like increased performance for athletics, there is a challenge gaining cooperation with other school districts for later game/meet times, McKernan said.

Board members expressed opinions to the committee and also asked a wide range of questions.

Democrat Lorna Thomas-Farquharson asked if the benefits outweighed the challenges in the districts that had already made the change. “We asked Wilton if they would go back and they said no,” McKernan said.

Republican Mark Zydanowicz urged the committee to research “blue light” from iPhones, and also said that switching start times could help some kids but hurt others like athletes who will then have sports later into the day and less time to do homework. “This change doesn’t just help everyone. It’s not a magic wand,” he said.

“This is more challenging every time you come forward but I do think it’s worth continuing to explore,” Democratic Board Member Deb Polun said. She suggested that perhaps rather than starting high school later every day, that it be done once or twice a week, perhaps a later start like 9 a.m. just on Wednesdays  at the high schools rather than early dismissal.

“We would need to find a structure in which Pre-K through 12 would meet,” Vicinus said.

Republican Rob Levine said he thinks that the question of whether private schools would also change their start times needs to be answered before the Board could even consider its decision, because an extra $500,000 isn’t affordable.

“If they say they’re not moving, that would help us as a Board know what we’re up against,” Levine said. “If it’s a ‘hard no,’ I don’t know how we could even consider. This was supposed to be a revenue neutral proposal.” He said this is a serious consideration and,  “We’re simply not cash rich in this town.”

McKernan and Vicinus urged the Board to provide clear parameters regarding start times – for example if high school day should begin at 8 a.m. or 8:30 a.m. – so that they can develop better information about transportation costs as well as the impact on other services such as daycare.

Moore also requested some additional guidance, and said he would not be willing to cut $400,000 from another program to make up for the additional cost of later school start times if the private schools don’t change and transportation costs increase.

Democrat Dave Pauluk said that Thursday night’s family information session will be very important. “It will be very interesting to hear what the parents have to say,” he said.

A complete copy of Tuesday’s report can be found in PDF form below.