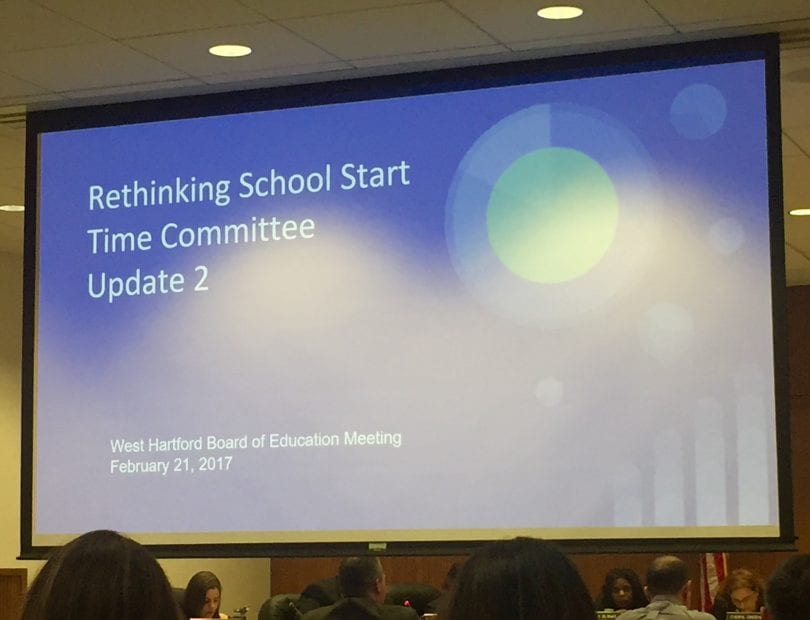 The ‘Rethinking School Start Times’ Committee gave its second report to the West Hartford Board of Education on Wednesday night, with a focus on athletics as well as other impacts.

The Rethinking School Start Times Committee reported back to the West Hartford Board of Education on Wednesday night, and the second of three planned presentations about the impact of a later start time focused on student-athletes as well as other research that is being conducted.

The Board is in the early stages of considering an adjustment of school start times, and Director of Secondary Education Anne McKernan, who heads the committee, provided an update of work the 22-person committee has been doing since it began meeting in mid-September.

Athletic Director Jason Siegal leads the Athletic Impact Subcommittee, which examined the impact on athletics of changing the school day so that dismissal is delayed by 30 or 60 minutes.

He said that combined between Conard and Hall, over the past three years an average of about 1,650 students have been involved in athletics – representing about 60 percent of the student body. There are more than 120 teams, and about half of the students play more than one sport. Many sports have three levels of competition, and there are about 150 coaches, 69 of whom are West Hartford Public School teachers. There are 11 home sites for practice and competition.

Loss of instructional time that would result from early dismissal is one of the biggest challenges, Siegal said, and while requests can be made for changing start times of contests, it’s not always possible.

“I would love to say that all 31 CCC [Central Connecticut Conference] schools would be willing to change start times,” he said, but that’s not the case. There are multiple reasons why start times can’t easily be changed from the league’s default start time of 3:45, he said, including monitoring students who have to remain on campus for that gap in time as well as the use of facilities by youth leagues.

The availability of officials who are often double-booked for games, the need to use additional non-school facilities which would add to transportation costs, and possibly limiting the number of games for non-varsity teams later in the fall season due to lack of light are also factors, Siegal said.

West Hartford has a policy with respect to light usage at the high school fields, and while the district uses the lights only about half the allowable number of time now, that could change if more games need to be played under the lights, particularly in the fall.

Siegal said that under the current schedule, with high schools dismissing at 2:15 p.m, there will be 23 early dismissals at Conard and Hall combined during 2017-18, primarily for state tournaments. That number represents the number of events requiring early dismissal, not the number of students impacted.

If high school were to end at 2:45 p.m., Siegal estimated 200-220 events requiring early dismissals of 15-20 minutes “largely due to away contests.” The impact may be less at Conard because the school has advantage of being right off the highway, he said.

With school ending 60 minutes later, at 3:15 p.m., there may be 250-265 events during a school year requiring early dismissals of 45-60 minutes each, for away games as well as some home games, Siegal said.

Right now most practices start between 2:45 and 3 p.m., Siegal said, and coaches allow for a buffer time so that students can speak with teachers after school to get help.

“I see that time being potentially wiped out with later start times,” Siegal said. “Even 20 minutes to ask questions of a teacher is going to be a loss.”

McKernan also noted that the district uses several town-owned facilities that would not easily be able to accommodate a later schedule for school sports because it will impact their other users.

“Cornerstone is a fee-based facility and we can’t tell them much about how they survive. The golf course is another one. These children need to be on and off,” she said. Right now the tee times at Rockledge are 3 p.m., and that would mean a loss of more than one period if golfers needed to be dismissed to make that start time.

Board member Deb Polun asked about the possibility of a rotating schedule and Conard Principal Julio Duarte, who is on the Rethinking School Start Times Committee, said that the current scheduling model provides an 80 percent success rate for students getting to take the classes they request. Changing that “will reduce number of students who get to take some courses.”

“It’s expressly the reason why, if there is a decision to implement, it necessitates a minimum of a year of study because there will be significant hurdles,” said Paul Vicinus, the assistant superintendent for Curriculum, Instruction and Assessment. It may require an overhaul of the school schedule.

The challenges with a rotating schedule, Superintendent Tom Moore added, include science labs which back up to the regular course times, and setting fixed lunch periods.

Board Chair Cheryl Greenberg asked how much success Greenwich and Newtown, which are in the first year of later start times, had at changing times for athletics.

“Over time that support changed and they found many more challenges as the fall season went on asking those teams to help them out and change their start times,” Siegal responded.

McKernan said that representatives from Wilton, which changed start times about 15 years ago, were at a recent meeting that she attended of CABE, the Connecticut Associate of Boards of Education. They reported that initially there was some level of cooperation but the response more recently from other schools is that it’s been a hardship “and they are backing off in best interests of their children.”

In addition to the impact on athletics, the Committed provided the Board with a report on their discussions with Newtown and Greenwich, where the changes were implemented earlier this year.

“One of the things we learned is that location and geography make a difference,” and have a major impact on transportation as well as athletics and other after-school activities.

The Academic Impact Subcommittee has continued its research, and the studies provide various findings on grades vs. quality of life and the causal vs. correlational result of later start times on academics.

At the CABE meeting, McKernan said that Wilton representatives told her they did not change start times for the main purpose of improving academic performance. Like West Hartford, Wilton was already a high-performing district.

“No studies say that grades went down,” McKernan said, but the results from various studies regarding academic performance are very hard to pinpoint.

“We already do incredibly well and to look for higher scores is ridiculous,” Greenberg said. “My concern is if we prevent a suicide if we minimize depression, to me that’s the highest priority … It isn’t ‘Can we get higher SAT scores?’ If you find that there’s a health or a mental health impact on students that’s the most compelling impact.”

Other questions and suggestions from Board members included studying the impact of “blue light” on students’ sleep, how late buses will be impacted, and switching the district’s Wednesday early dismissal to a late start and running teacher professional development in the morning.

Vicinus said that changing the time of professional development could create childcare challenges and should not be done without significant input from the community. He said he feared it “might be an end to a program that makes West Hartford stand out.”

McKernan said that West Hartford’s Wednesday professional development “is such a special thing.”

Before the meeting, about a half dozen residents spoke to the Board in favor of later start times, including Dr. Sarah Raskin, a professor of psychology and neuroscience at Trinity College. Raskin thanked the Board for the work they are putting into the study.

Jason Buckman, a senior at Hall High School, provided a summary of a sleep study he conducted with 672 respondents, with relatively equal representation between Conard and Hall and among all four grades.

“Right now on an average school night kids are getting an average of 6 hours and 42 minutes of sleep,” he said. On weekends the average amount of sleep is 9 hours and 34 minutes, while the average time the students go to sleep is about the same, between 11:30 p.m. and midnight.

“The average wakeup time really makes the change in the amount of sleep these teens are getting,” Buckman said.

Mary Fleischli said her oldest son is in high school and played freshman soccer, so she appreciates the challenge of accommodating athletic schedules and later start times as well as the importance of having children well-rested. “While missing class is not ideal it forces them to advocate for themselves and think ahead,” she said, adding that she would like to have an estimate of how often other districts would be able to accommodate a changed schedule with later start times or weekend dates for athletic contests.

“The mental and physical benefits outweigh these challenges,” Fleischli said.

Anna Shusterman spoke about mental health, which is impacted by multiple stressors including academics and social media. “What does sleep have to do with it – it’s just a huge lever.”

Poor sleep can be a consequence of anxiety, but can also be a cause of anxiety and of poor mental health, Shusterman said. “I just can’t think of anything that’s more important than our children’s health and well-being.”

Jillian Gilchrest said that when West Hartford first started discussing later start times, more than 15 years ago, the town would have been an outlier if the change had been made, but now several towns have made the change and others are considering it.

“It certainly might be easier if every district changed at once, particularly as it relates to athletics,” she said, but if more towns changed the will to make a change statewide would be greater. “West Hartford is in a unique position to help lead this change in partnership with several school districts in our central conference … We all want what is best for our children and to allow all children to reach their potential.”

The survey will be conducted from May 1-15, and responses will be requested from parents/guardians, staff, and secondary school students. There will be about 24 questions, McKernan said.

A family information night will be scheduled for May 3, and the Committee plans to present its final report to the Board of Education in May.

Moore said the Board’s vote on making a change will be at its last meeting in June, and if the vote is to change start times. it would not happen until at least the 2019-20 school year to allow for implementation time.

For more information about the work that the Rethinking School Start Times Committee is doing, visit their page on the West Hartford Public Schools website.

A complete copy of Tuesday’s report can be found by clicking here and in PDF form below.