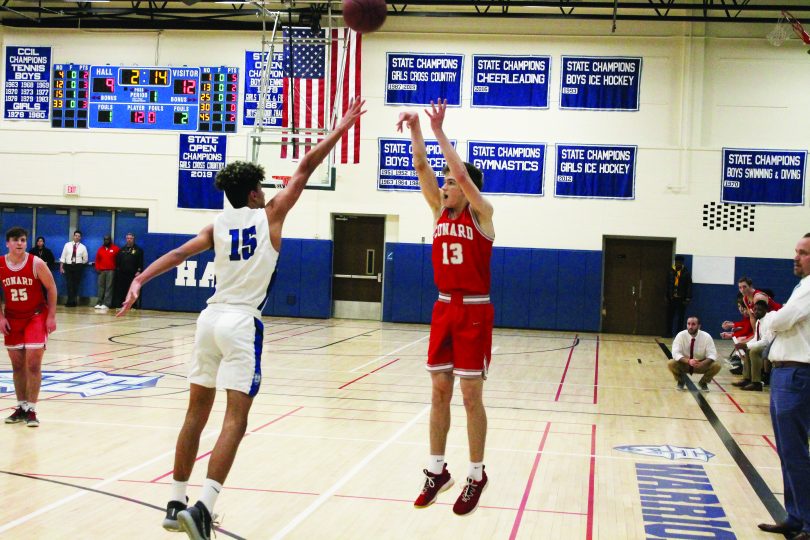 Conard will play a first round game in the state tournament at home in West Hartford for the first time in more than 20 years. 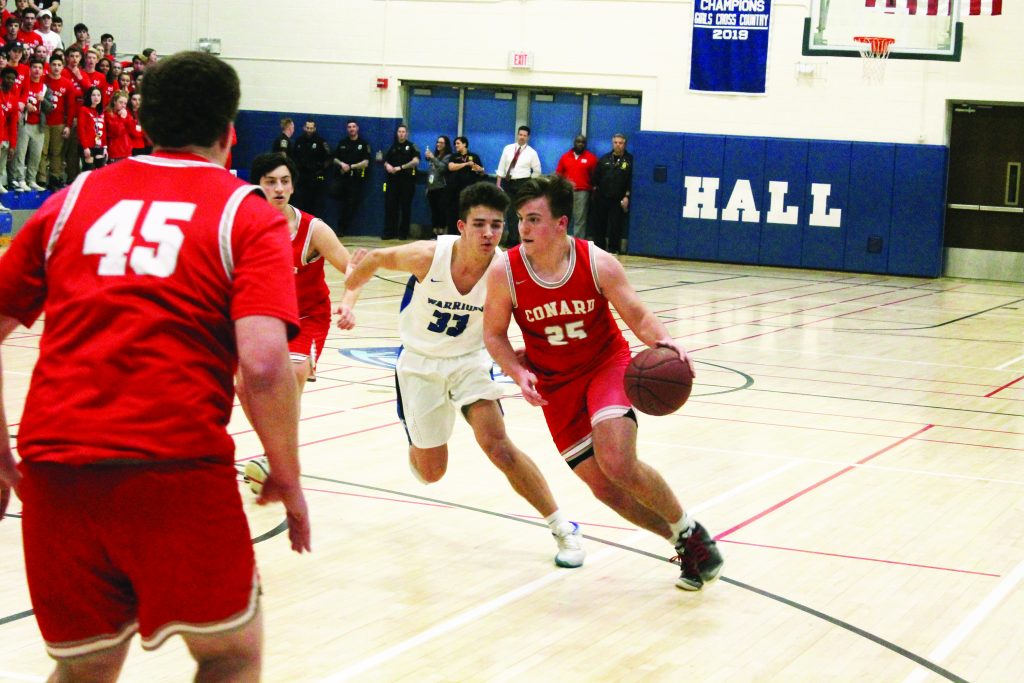 Conard High senior Arsen Shtefan (no. 25) was a key performer in a 69-64 win over rival Hall in the final regular season game Feb. 24 that clinched a first-round game at home in the state tournament. Photo credit: David Heuschkel

It wasn’t a tournament game, but the Conard High basketball coaches treated the final game of the regular season against rival Hall as if it were one.

In the days leading up to the Feb. 24 game, head coach Jared Leghorn made it a point to remind his team what happened two years ago. Having already qualified for the state tournament, Conard looked flat and played with little urgency in a late season loss to Hall (3-17) that cost the Chieftains a first-round home game in the Class LL tournament.

When the teams met Feb. 24 this winter, the scenario was similar. Conard had already secured a berth in the state tournament and Hall was once again playing the role of spoiler, having already been mathematically eliminated from qualifying.

Leghorn reminded his players that a loss to Hall would cost the Chieftains a home game in states, as well as a berth in the Central Connecticut Conference tournament.

“We told them what was on the line for that game: Making the CCC tournament, getting a home game for states, and sweeping Hall,” Leghorn said. “Everything came down to that.”

This time, Conard came through. A 69-64 win at Hall gave the Chieftains a spot in the CCC tournament and a first-round home game in the state tournament for the first time since 1996.

“I was in kindergarten [back then],” said Leghorn, in his sixth season as head coach of the Chieftains.

Leghorn was also thrilled to get an opportunity to play in the 16-team CCC tournament even though his team lost to host Northwest Catholic by 30 points in the first opening round Feb. 27. He called it a great experience, noting it was the first time most a lot of his players were in a single-elimination tournament, and considered it better than any practice.

“I felt a little bit better after Northwest beat Manchester by 36 in the quarterfinals,” Leghorn said. “If Northwest is playing their ‘A’ game like they played against us, they’re going to really tough to beat.”

Conard lost all three games against Northwest Catholic (17-3) this season, including two in the regular season. Northwest won the first game by 28 points and the second one by four in overtime.

Leghorn would love to see Northwest Catholic a fourth time – it would be in the semifinals of the state tournament. Despite midseason losses to Simsbury (4-16) and Hall (6-14), John Mirabello’s team is still viewed by many as the favorite to win it all in D-III. The No. 2 seeded Lions have a first-round bye.

First, the Chieftains are focused on Plainfield. Leghorn said he and his staff know the Panthers “pretty well” from seeing them play three times. They were going to watch Plainfield play St. Bernard in the Eastern Connecticut Conference Division II final March 3.

“I know their coach [Bob Arremony] has 500 career wins. He’s been there for a long time,” said Leghorn, who wasn’t born when Arremony began coaching at Plainfield 40 years ago. “They’ve got a real big guy down low we’re going to have Peter [Simplicio] match up with. They’ve got a couple of really good shooters.”

Leghorn believes his team has a leg up playing at home. The Chieftains were 8-2 in their own gym this season with one of the losses to Northwest Catholic in overtime. The other was to Glastonbury (14-6) on Feb. 10, the last time Conard played at home.

So when Conard hosts Plainfield in the first round of states, it will have been a month since the Chieftains played a meaningful home game.

“Our student section has been phenomenal this year,” said Leghorn, who expects a large student turnout for the state tournament game against Plainfield.

Conard’s 12-8 regular season record is the best record by the Chieftains since John Benyei’s team went 16-5 overall in the 1995-96 season, which ended with a loss to Holy Cross of Waterbury and star Edmund Saunders in the quarterfinals of the state tournament.

“Coach Benyei always tells me about that ’96 team,” Leghorn said, adding he was in kindergarten back then.

Unlike that ’96 team, which was led by David Love, the current squad doesn’t have a definitive star player. Any one of three or four players could be the team’s leading scorer on any given night. It could be junior swingman Connor Olechna, who was named all-conference this season. Simplicio is capable of having a big game on offense and making
an impact on the defensive end. Senior Arsen Shtefan could have the hot hand. He made six 3-pointers and scored 26 points in the win over Hall.

“I know it wasn’t a tournament game, but that’s the way we approached because of everything that was riding on it,” Leghorn said.

If Conard can get past Plainfield in states, the Chieftains would face No. 3 Capital Prep in Hartford. When the teams played in the regular season, Conard won 44-27 in West Hartford.