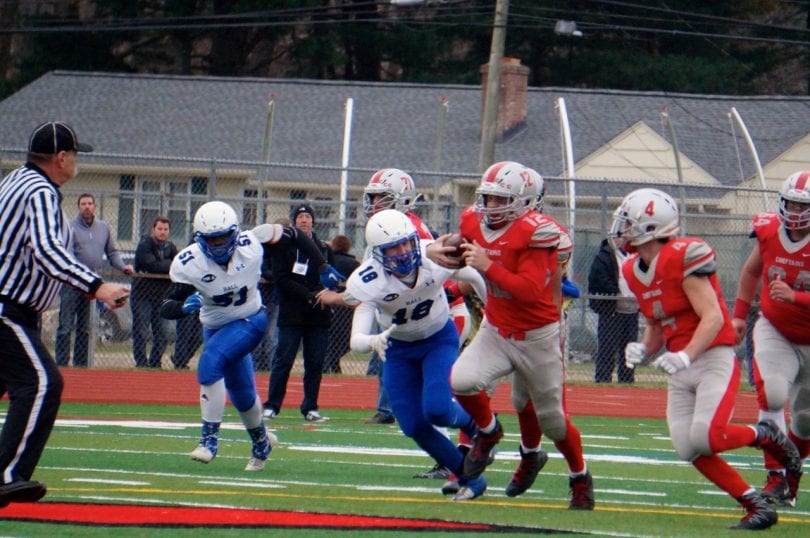 With high school football season almost underway in West Hartford, both Conard and Hall are prepared to put in the work necessary to have successful campaigns in 2018.

For Hall head coach Frank Robinson and the Warriors, that work has been underway since the start of training camp.

“I think we’ve certainly gotten better every day,” said Robinson. “It’s always a process, so we’re in the middle of that process right now. We still have plenty of things to work on, but things are going in the right direction.”

Hall finished the 2017 campaign with a 2-8 record but capped off last season with a victory over Conard in the 61st annual Mayor’s Cup game.

Four years earlier, in 2013, the Warriors won the Central Connecticut Conference title. The CCC has been tough in recent years, Robinson said, but he still expects his team to compete this season as Hall opens 2018 at Simsbury on Friday night.

“The league is extremely strong,” he said. “The teams have been very good, and we’ve competed and I’m happy with our kids for competing. We have to make plays, and sometimes they don’t. That’s just part of the game.”

The Chieftains open the season Friday night at home against New Britain, which head coach Matt Cersosimo anticipates will be full of energy on both sidelines.

Cersosimo says the Chieftains’ goal this season is to “reach our full potential.”

“We want to be able to come out and make the most out of every opportunity we’ve got,” said Cersosimo. “We have a limited number of these opportunities for the amount of work that goes into it, so for us to reach our full potential throughout the course of the week, as well as heading into game day, is a major goal of ours.”

Cersosimo said Conard will rely on the leadership of its seniors, who were part of an 8-2 season as freshmen in 2015.

“We have some senior offensive linemen, we have some senior wide receivers, and we have some defensive backs as well as linebackers and D-linemen who are really [going to] take charge and roll from there,” he said. “It’s really our entire senior class. They’re really the spearhead of everything, and they’re the ones that are in charge of creating and keeping the tradition and the culture going in the right direction.”

Among the team’s senior leaders, Matt Langevin will start at quarterback for Conard in the season opener. Cersosimo said he is looking forward to him “leading the troops” this season.

“He’s got a great opportunity in front of him to lead our offense as well as our team, and with that comes great responsibility, so I know he’s looking forward to the challenge,” Cersosimo said.

Hall had not named its starting quarterback as of Saturday morning, but the competition between senior Tom Sullivan and junior Matt Keller has been interesting for Robinson to watch.

“It’s been great that they’re competing because it makes each one of them better,” he said.

Eight of Conard and Hall’s ten opponents (excluding each other) are mutual, including two teams ranked locally by the Hartford Courant. Both the Chieftains and Warriors will take on East Hartford, Enfield, Glastonbury, Manchester, New Britain, Simsbury, South Windsor and Southington this fall. Conard’s lone exclusive opponent is Maloney, while Hall takes on local power Windsor.

With tough slates this year, the coaches know there are no guaranteed games for either squad.

“It’s going to be the process,” Robinson said. “Are we going to do the things we need to do to get better to, in the end, be able to make the plays during the game?”

Cersosimo echoed the sentiment: “There’s not one night where we’re saying to ourselves, ‘Oh, this is going to be a win.’ … If we don’t have a great week of preparation, we’re capable of losing any one of those games as well as we’re capable of winning them.”