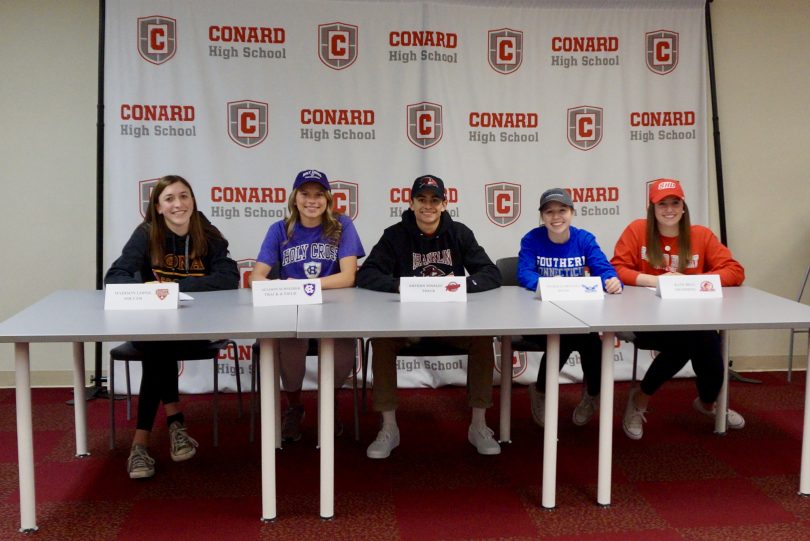 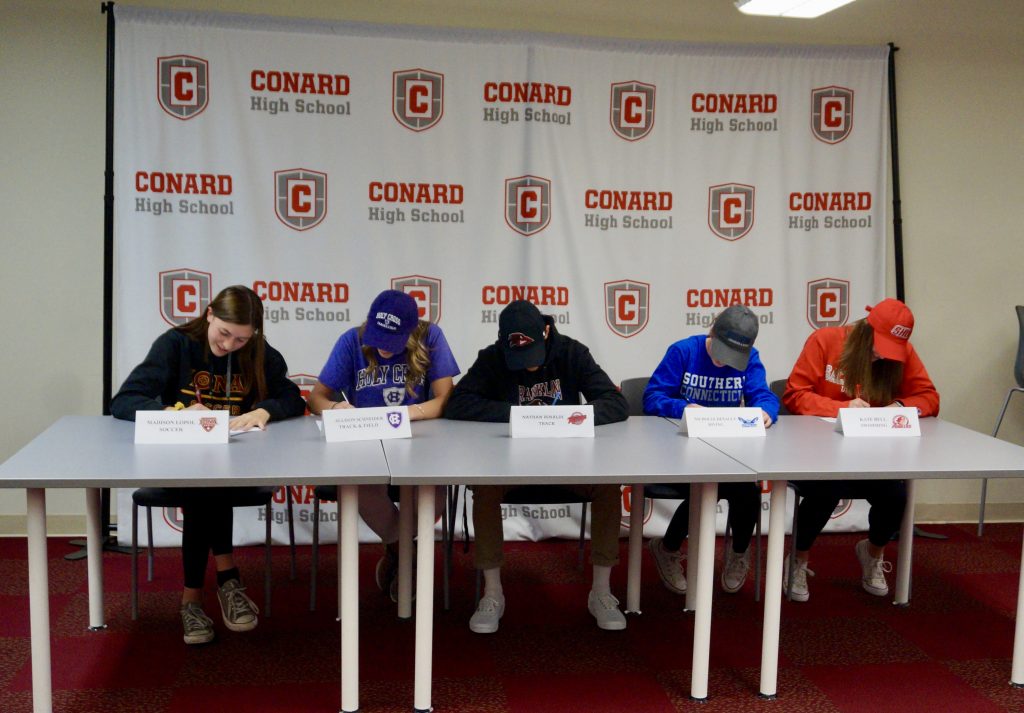 Five members of the Conard High School Class of 2020 who plan to participate in sports at the Division I or II level formalized their commitments Wednesday and signed their National Letters of Intent.

The following students, pictured above from left to right, officially signed their letters at the ceremony, which was attended by families, friends, high school coaches, and teammates.

Athletic Director Jason Siegal said attending a signing ceremony is one of his happiest days. “This is the culmination of a lot of hard work to get to this point,” he said.

“I also know how much [hard work] your families, and coaches, and teammates and parents put in to get to this point,” Siegal added. “It’s a great day to celebrate the next step of your athletic careers,” he said, and noted how proud he is of these students who are going on to represent Conard, their families, and West Hartford at the next level.

“I do hope that you’ll come back, talk to your coaches, talk to anyone here that will be happy to listen and let us know how things are going,” Siegal said.

Coaches also took a few moments to offer praise and congratulations to their athletes.

Swim coach John Smachetti said every time Denault competed she earned a state qualifying score. This year she was all-conference, medaled at the trials, and competed at the State Open, and it was by far her best season.

“She’s also been all-academic which to me is the most important thing,” he added.

Bell is a school record holder in the 100 butterfly, and in addition to her athletic prowess, “Kate is one of the most compassionate people I’ve had on the team. She truly cares deeply about every one of her teammates, and I saw that the whole time [she was] here.”

“Nate is one of the most hard-working, conscientious kids I’ve run across. He is a fighter,” Chase said. “When everybody else is dying and hurting … he is the toughest one, he always come through, he always finishes strong, he works hard at it. And more importantly than all that, he’s just a great kid to be around.”

Knapp added that he is looking to Rinaldi to infuse his success to the younger members of the team.

Matt Redman, who coaches Schneider as a jumper, said she has overcome many physical struggles to get to the point where she is today. “She’s really a hard worker,” he said. She’s All-State and conference, he added, “but what’s really cool about Allie is she’s an awesome kid, she’s really positive … she always wants to work harder.”

Redman added that he is looking forward to coaching both Schneider and Rinaldi in indoor and outdoor track this year. “We’re going to have a lot of success,” he added.

“Allie got here because she’s a worker,” said James Redman, also an indoor and outdoor track coach. “She got to where she is because she took the extra reps in practice. … Although she’s a nationally-ranked jumper and a phenomenal athlete, she’s an even better human being.”

JV soccer coach Heather Grove shared some words from Meg Cersosimo, who served as interim head girls soccer coach this fall but was unable to attend the ceremony. “Maddie is the true meaning of a student athlete. She excels in both the classroom and on the field,” Cersosimo wrote about Lopol.

Lopol was a two-time all-conference selection in a very competitive conference, and is a leader on and off the field, and even though she was injured this season she continued to be a leader, Cersosimo wrote. “When she returned to play her passion for the game was evident. She makes such a difference when she’s on the field … what sets Maddie apart is her loyalty to her teammates and coaches, and her work ethic.”