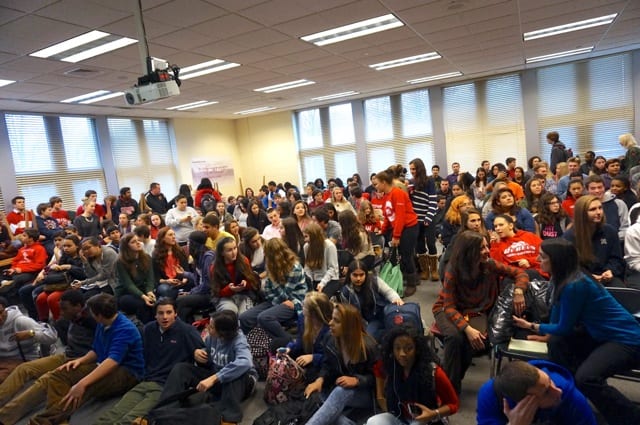 As part of a Human Rights Day progam, Conard High School students in Dr. Tracey Wilson’s Human Rights class gave a a presentation about changing the school’s Chieftain mascot as well as the name. 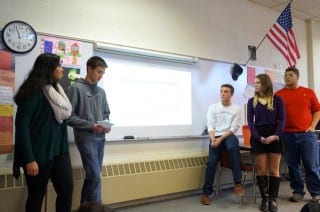 West Hartford’s Conard High School honored International Human Rights Day on Thursday, Dec. 11, 2014, by inviting students to participate in a day-long series of programs on topics ranging from homelessness to LGBTQ rights to the use of art for social activism, but the most well-attended session – a discussion about changing the school’s mascot and name – attracted an overflowing crowd of students.

The day-long program was organized by Conard social studies teacher Dr. Tracey Wilson and students in her Human Rights class. Five students – Tahreem Ali, Jacob Judd, Joe Duva, Rachel Yousman, and Leandro Pegeas – presented a session advocating changing the school’s Chieftain mascot and name, and then led a discussion with other students and teachers about the controversial topic. More than 200 students, as well as teachers and administrators, attended the session.

The students began the presentation with a history of Conard’s use of the Chieftain mascot – which has been in place since the school opened in 1957. Since then, more than 2,000 schools throughout the country have dropped their Native American mascots, said Ali.

Ali said the group studied cultural appropriation, and learned that the feathers on a headdress are spiritual. “Only true Chieftains can wear a headdress,” Ali said.

Duva said that use of the headdress is inappropriate. “It’s like me walking around school with a yarmulke on, even though I’m not Jewish,” he said. Duva also said that a Chieftain is irrelevant to Connecticut, since it only relates to Plains Indians, not tribes that have ever populated this part of the country. “Ours really shows our disrespect to the culture, not understanding,” he said. 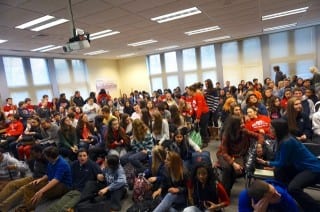 Many have raised the question about schools’ use of names like the “Fighting Irish” also being inappropriate. Judd said that the distinction is that “the name ‘Fighting Irish’ was created by the Irish Catholics themselves.”

Yousman said, “Using the title of Chieftain trivializes the honor, and it’s also dehumanizing. Most mascots are animals,” she said. Yousman said that although many question why Conard should change a long-standing tradition, “Times are changing.” Use of the logo is offensive she said, and breeds intolerance among students.

“I’m grateful that our mascot is not as offensive as the ‘Redskins,’ but it’s still racist,” Yousman said.

Although a majority of the students in the audience, many of whom are members of Conard athletic teams, did not appear to agree that the logo should be changed, they were civil and respectful during the ensuing question and answer period.

Neither side had any suggestions for an alternative mascot, but Yousman said it should be anything other than a human being and that it should be up to the student body to decide.

Student John Cannon raised the question of cost, since changing the mascot would require new uniforms and other expenses. Cannon also said he believes that Conard is respecting the mascot in the way it’s used.

Later in the question and answer period student Brendan Dakin, one of the leaders of Conard’s “Tribe” fan club, cited two different polls. An ESPN poll found that 82 percent of Native Americans have no issue with the imagery, and 90 percent had no problem with the imagery in an Annenberg poll of people who self-identified as Native Americans, Dakin said.

Student Katie Berry said that being in the “Tribe” is like being part of a family. “I represent myself as a Chieftain. That’s what I’ve gone through my four years as. If we’re not the Chieftains, what are we going to be?” Another student in the audience echoed her concern, fearing that if the name is taken away the community would not be as strong.

Student Molly Bugos asked if the presenters thought it would also be necessary to change the name of King Philip Middle School (named for a Native American leader) or some of West Hartford’s street names.

“There’s a difference between naming a mascot and a school or street. You name street names and institutions after people you want to respect and remember. When you name a mascot it’s a festivity, not respect,” Yousman responded.

Katherine Policelli asked those in the room to google the word “Chieftain.” She said the definition that appears is: “leader of a people or clan.”

“I think the mascot should be changed, but the name ‘Chieftain’ is something we should keep because it means a powerful member of a powerful organization,” said Policelli.

Yousman responded, “We’re willing to take it one step at a time.”

Conard Principal Julio Duarte said that ultimately the decision about the mascot and the name will be made by the Board of Education. He urged students to email board members to express their views. Duarte said there will be a forum on the issue in February, and board members should hear from students as well as alumni.

Duarte said that the Conard staff has also weighed in on the issue. Teacher Kerrie Massaro, who conducted the poll of staff, reported that 60 percent are in favor of keeping the Chieftain name, while 52 percent think the school should eliminate the Native American imagery that goes with it.

Student Brian Wilson said he gives the student presenters “a lot of credit for standing up in front of the crowd” – the majority of whom don’t share the same opinion. He said that Conard student council has also taken a poll on the issue, and 85 percent say they like the Chieftain name.

Conard Media Specialist Rachel Tonucci said after the presentation that the athletes seem to be defensive about the issue “because they feel like they’re being attacked.” That’s not the case, she said, and this isn’t even close to a complete discussion of the issue.

Tracey Wilson said she was pleased with the job her students did leading the discussion. She had expected a lot of interest, and said more than 200 students had crowded into the room to be part of the conversation. Although about a dozen students asked questions, everyone seemed to pay attention, Wilson said. “There are a lot of kids who didn’t speak but have a lot to think about,” she said. “The presenters were really in the minority.”

Following the discussion, Duarte said that Conard’s day-long Human Rights Day program was an overall success. Conard takes a somewhat different approach than Hall, which held a day-long program on Wednesday, opting for a smaller number of more intimate group discussions. They decided to have the program on Thursday rather than Wednesday (actual Human Rights Day) because the class periods are longer.

Regarding the conversation about the mascot, Duarte said he is proud of the kids on both sides of the issue. “When they are passionate, you’re going to have a lively conversation. Both produced good evidence,” he said. “They are going past ‘it’s just what we’ve done,'” he said. “I can’t express how proud I am of the kids who voiced their opinion.”

What do you think about the Chieftain name and mascot. What about the Hall “Warrior” name? Tell us in the comments.