Conard High School sports teams use a variety of logos, but the Mohegans find this one acceptable because the feathers falling downward are a sign of peace. Photo credit: Ronni Newton

Conard students, teachers, coaches, and alumni have elicited the opinion of the Mohegan tribal leadership regarding the West Hartford high school’s mascot and name.

Conard High School sports teams use a variety of logos, but the Mohegans find this one acceptable because the feathers falling downward are a sign of peace. Photo credit: Ronni Newton

The West Hartford Board of Education is poised to make a decision about whether to keep or change both the Conard Chieftain and Hall Warrior names, as well as the Conard mascot, and extensive discussion and research has been taking place by those on both sides of the argument.

Conard Student Council Co-President Brian Wilson, who is in favor of maintaining both the school’s name and mascot, started the “Keep the Chieftain” Facebook page on Nov. 24, 2014, shortly before Conard students who favor changing both the name and mascot planned a presentation on Human Rights Day. The “Change the Chieftain” Facebook page was also created on Nov. 24.

The Human Rights Day presentation about the changing the Chieftain, attended by an overflow crowd of more than 200 students, teachers, and administrators, included a lively yet civil discourse between the presenters and those who had opposing views.

Presenters cited a statistic from a poll taken by the National Congress of American Indians, which indicated that 82 percent of Native Americans think that the use of Native American mascots is offensive. However, since the poll was general and did not specifically address the Chieftain name and mascot, Wilson wanted to do more research.

“I reached out to the Mohegans and other Native American reservations around the country. The other side just looked for an opinion on Native American mascots, but not the Chieftain,” Wilson said.

“In my opinion, you can’t categorize ‘Redskin’ with ‘Chieftain.’ One is derogatory, the other is not,” he said. “I agree with changing the name of the Redskins,” said Wilson.

Wilson contacted Mohegan Tribal Chief Lynn Malerba and Mohegan Tribal Council Chairman Kevin Red Eagle Brown via email, and just before winter break began in December, Wilson and Conard Principal Julio Duarte had a conversation with the two Native American leaders. Brown – who is a member of the committee trying to get the Washington Redskins to change their name – and Malerba had already discussed the issue with other tribal leaders, Wilson said, and provided the results of that discussion.

“Their final decision was that the Chieftain and Warrior names are not offensive to them as long as they are used with a sense of pride and honor,” Wilson said. He said that at Conard, the Chieftain is used with pride. “Coaches and teachers use the Chieftain to inspire leadership, strength, and respect, and I think it does that more than any other mascot would,” said Wilson.

“They are chiefs themselves, leaders of a Native American tribe. Their opinion is most important,” said Wilson. “They are okay with the use of the name. Those who want to change the Chieftain say that use of the name diminshes power, but [the Mohegans] don’t think that at all.”

Malerba and Brown said that the Native Americans want to be known as a “present culture,” not just for their history.

The Mohegan leaders did tell Wilson that it would be offensive and a dishonor to them if anyone dressed up as a Native American – which has not been done at Conard for many years – but did not find fault with use of a Native American image. Wilson said that the name and mascot for the Montville High School Indians – which is the school district that serves Uncasville, where Mohegan Sun is located – is specifically approved by the Mohegans.

“Chief Malerba also said that Native American connotations and words mean different things in different parts of the country,” said Wilson. “She said that if you’re in Connecticut, you should ask Connecticut tribes.” 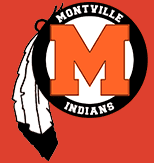 This logo for the Montville Indians was approved by the Mohegan Tribal Council. Courtesy image

The Mohegans provided examples of logos they had approved for the Montville Indians, and also offered to help Conard come up with an appropriate logo, Wilson said. There are currently a wide variety of images used by the school on sports uniforms, signage, and other materials. The Mohegans told Wilson that the image of the “C” with feathers falling off the side is appropriate, because “feathers falling downward is a sign of peace.”

Wilson, Principal Duarte, and students Jake Reynolds, Molly Bugos, and Brendan Dakin met with West Hartford Board of Education Chairman Dr. Mark Overmyer-Velazquez after the conversation with the Mohegans.

“I have to say I’ve been impressed, especially that people like Brian have done such hard and careful work,” Overmyer-Velazquez said. He said that there are a lot of sides to this conversation, and it has become an extended community conversation with alumni as well. “It will be a challenge, whatever will happen,” he said.

“The Warrior and the Chieftain are Native American in nature, and there needs to be an understanding that these are schools that want to promote diversity and understanding,” said Overmyer-Velazquez.

In response to Overmyer-Velazquez’s concerns about how the same level of respect would extend into the future if the Chieftain is retained, Wilson said that he has reached out to a relative who taught at a Native American reservation and has come up with some ideas about how Conard students can assist the Native American students with improving their literacy and applying to college.

“The Mohegans also offered to send their cultural department to Conard in the future if we wanted to study the history of Native American in Connecticut,” said Wilson.

Overmyer-Velazquez said that the school leadership needs to “create guidelines so that years down the road, [the names and images] remain appropriate.” He said that the status quo today won’t solve the problem in the future.

The Board of Education will hold a forum in the West Hartford Town Hall auditorium on Thursday, Feb. 12, from 7-9 p.m. Wilson said he plans to speak in favor of keeping the Chieftain name and mascot, as do other students, teachers, coaches, and alumni. Others will speak in favor of changing the name and mascot. Representatives from Hall will provide their opinions about the Warrior name. Hall dropped its Native American mascot in 2012.

Overmyer-Velazquez said that the Board of Education will make its decision following the forum. He isn’t certain whether or not it will be made through a vote or a discussion.

Wilson said that a survey taken by the student council in the fall indicated 80 percent of students favored keeping the name and mascot while 20 percent were in favor of changing it. A follow up survey will be taken next week, after a presentation by musician and motivational speaker Frank Waln, a 25-year-old Sicangu Lakota from the Rosebud Reservation in South Dakota of “Music is Medicine,” a program which addresses issues facing young people both on and off reservations.

Although he is hopeful that the Chieftain will be allowed to remain Conard’s name, and that the mascot will be retained in the future, Wilson said that no matter what happens, “It’s been a great learning experience for all of us. On both sides, the mascot really matters to the current students,” he said.

Wilson said that teachers have a variety of opinions on the issue, and he is impressed that students are willing to be so vocal and to engage in discourse with their teachers even when they don’t agree.

“The students want to speak, and they want their voices to be heard. I’ve never seen so much student involvement,” said Wilson.