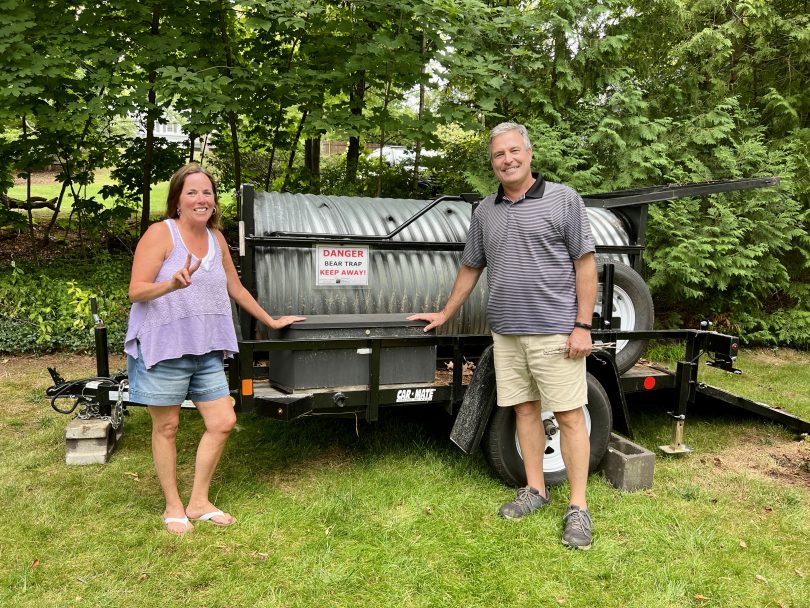 Christine Vannie (left) and Bill Priest have a bear trap in their yard now. After 18 years of living among wildlife, this is the first time there has been any threatening behavior. Photo credit: Ronni Newton

The Connecticut Department of Energy and Environmental Protection is attempting to trap a black bear that entered a West Hartford home on Sunday morning and returned early Monday, attempting to get into the house again. 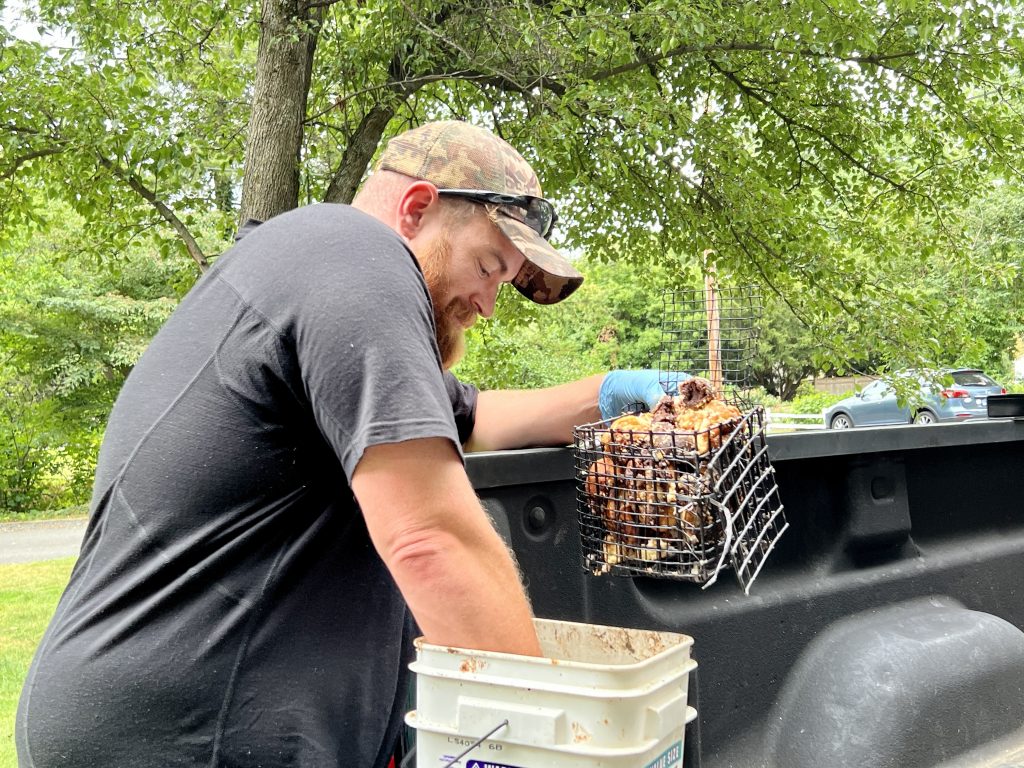 A DEEP technician baits the trap for the bear with stale doughnuts, donated by Dunkin Donuts. Photo credit: Ronni Newton

Bill Priest said he had been working in the yard, inside the open garage near the front of his house Sunday morning, and briefly went into the back yard before going inside to get a drink of water only to find a black bear in the kitchen, munching on marshmallows and peanut butter crackers that had been on the counter. It was likely the same bear that had raided a refrigerator/freezer in the garage a few days earlier. 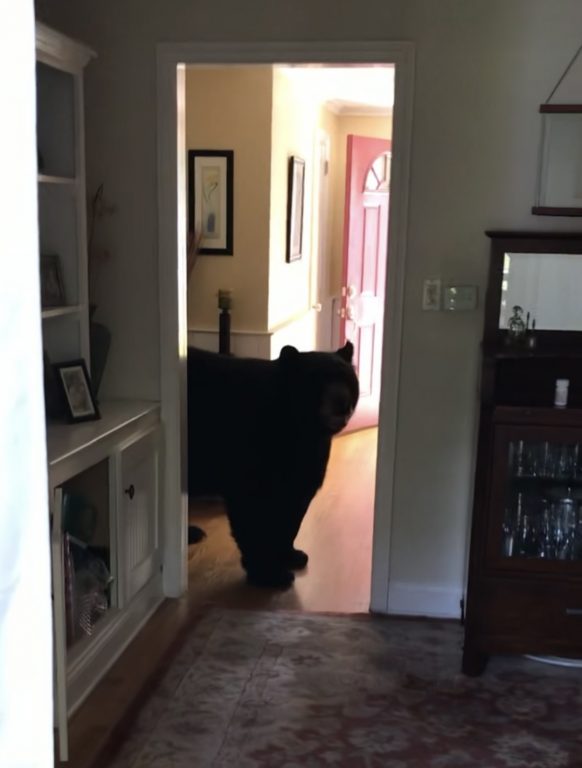 On Monday, hours after the bear – which is untagged – had returned and unsuccessfully made another attempt to get into the house, the Connecticut Department of Energy and Environmental Protection (DEEP) sent Chris, a seasonal employee who said he is a fur bear technician, to the West Hartford home where Priest and his wife, Christine Vannie, have lived for 18 years.

The trap will remain in place for a week, with the hopes that the bear will take the bait – of stale doughnuts courtesy of Dunkin Donuts.

There’s no guarantee, Chris said, but bears have a good sense of smell. “It’ll smell those doughnuts,” he said.

Baited, tested, set, and ready for the bear to take the bait of … stale @dunkindonuts outside #WestHartford home. Full story to come! @CTDEEPNews pic.twitter.com/e4OvwsI82A

If and when the bear is trapped it will be sedated, measured, and tagged. DEEP will also take a small sample of its fur and pull a tooth to determine its age and for DNA testing and other research purposes, the technician said.

The plan, then, is to “haze” the bear – to shoot it with a paintball gun, and make loud noises – essentially to recondition it and retrain it, to teach the bear that this home is not a pleasant place to be.

“We will leave him right here,” Chris said. “We’ll let him out right here and we’re going to make the experience as bad as possible.” 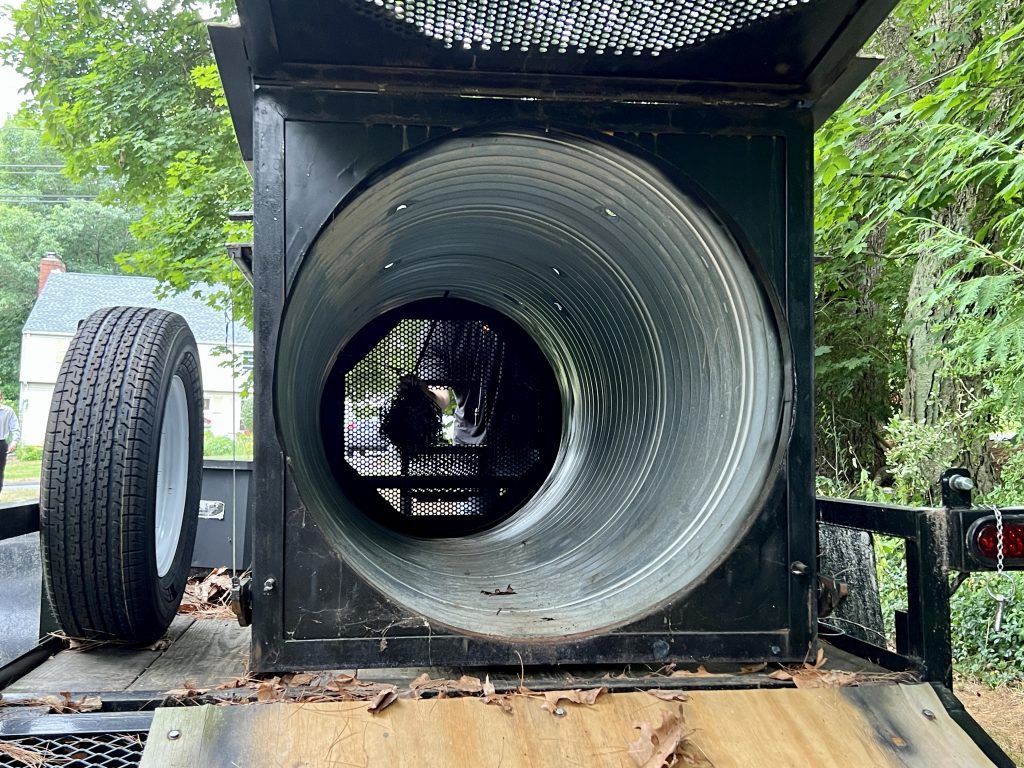 DEEP has set a bear trap at the West Hartford home of Bill Priest and Christine Vannie. When the bear tries to get the doughnuts in the box it will trip a wire that closes a gate on the other end of the trap. Photo credit: Ronni Newton

There are not plans to relocate the bear, and Priest said DEEP told him that euthanizing the bear is a last resort.

The technician didn’t know the percentage chance the bear would take the bait, but it has demonstrated a sweet tooth and he said they successfully trapped one last week.

On Sunday morning, with a chair in one hand and his cellphone in the other, Priest remained calm as he loudly and firmly instructed the bear: “Go on, that way. Go. Get out of here. … Take off bud.” The bear exited through the front door, where he had broken through the screen to enter the house, but made an attempt to get into the home through the garage only to be shooed away again by Priest, who anticipated the bear might try another way to get inside.

Several days earlier what is likely the same bear ransacked a refrigerator/freezer in the garage, bending the appliance’s doors, which had been tightly shut, to get inside. 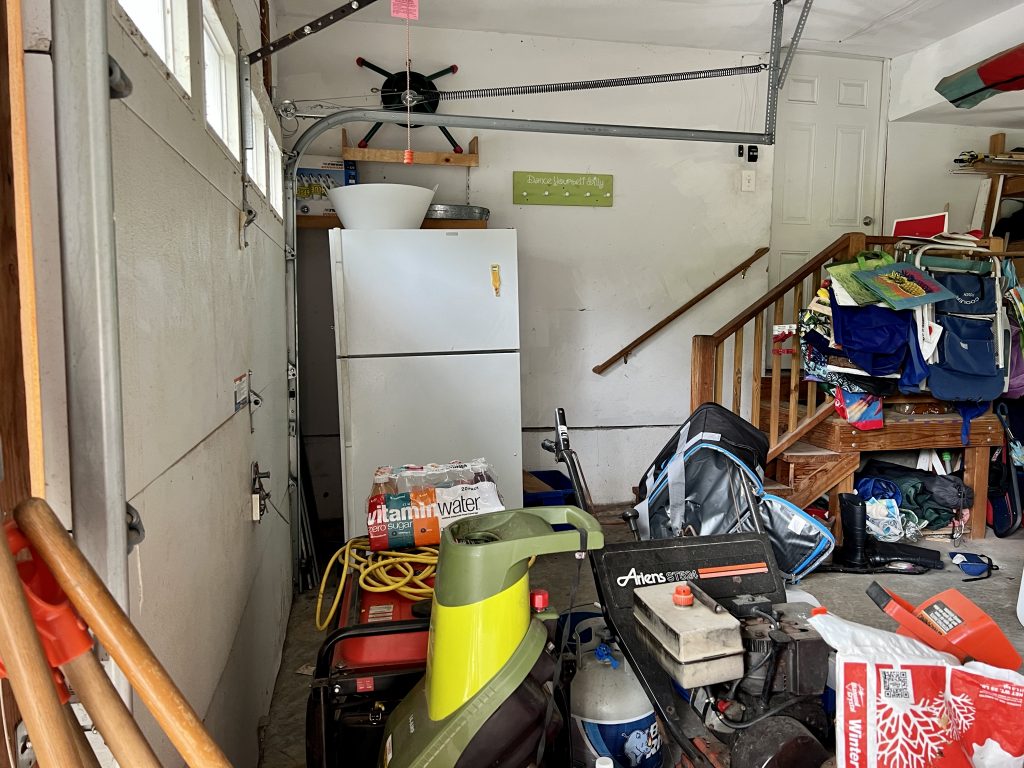 A refrigerator that Bill Priest and Christine Vannie have kept in their garage for years was broken into by a bear last week. Photo credit: Ronni Newton

“It crossed a line that none of the other ones ever have,” Priest said. “We’ve been here for 18 years.”

Priest said he slept downstairs on Sunday night, with all of the doors and windows tightly shut. His wife slept upstairs, also with doors and windows shut. Neither slept very well and both said they jumped at every sound.

The couple has two children, but one is away at camp and the other is out of college and lives and works in New Hampshire.

Priest said he was drinking coffee at about 5:30 a.m. Monday when the bear started pushing on the French doors in the back of the house. With the same stern voice Priest yelled at the bear to go away.

“I was holding it, he was pushing,” Priest said. “He’s really big.”

Priest said he pushed his own weight against the inside of the locked door – just in case the bear managed to somehow pop the lock holding the double doors together, and a bit afraid that the bear might punch through one of the glass windows. But he said he was more mad than anything else. “When he saw me and I started yelling at him, he left.” 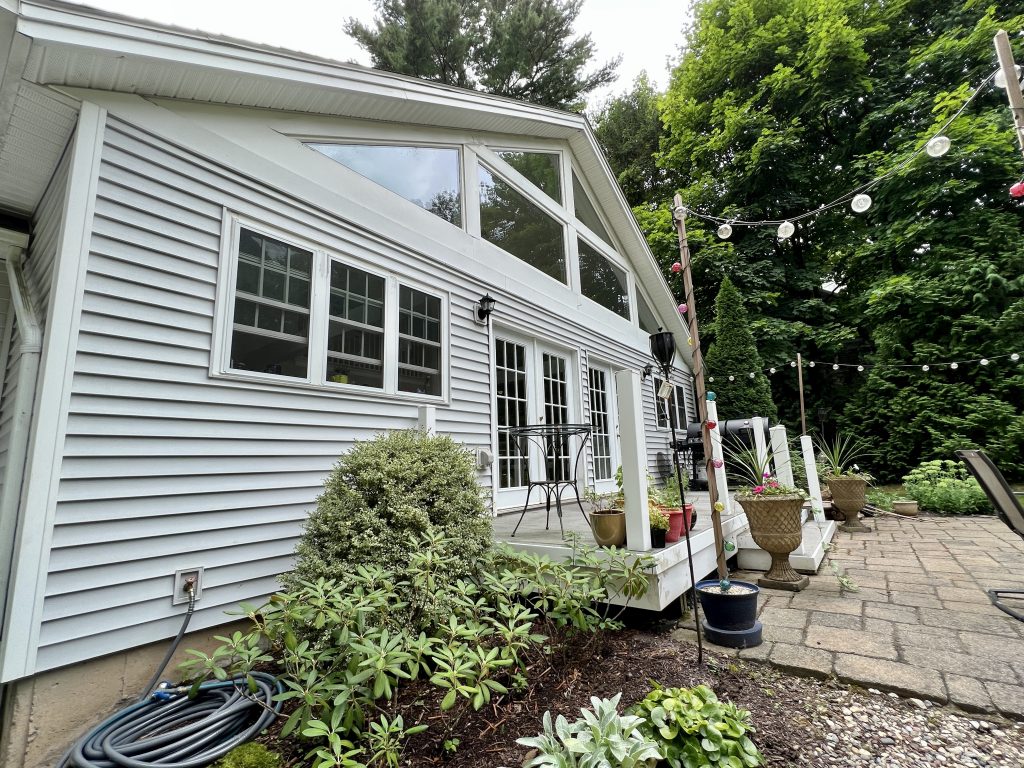 Bill Priest said that early Monday morning the bear that had broken into the kitchen the previous day was pushing on the French doors, trying to get back into the house. Photo credit: Ronni Newton 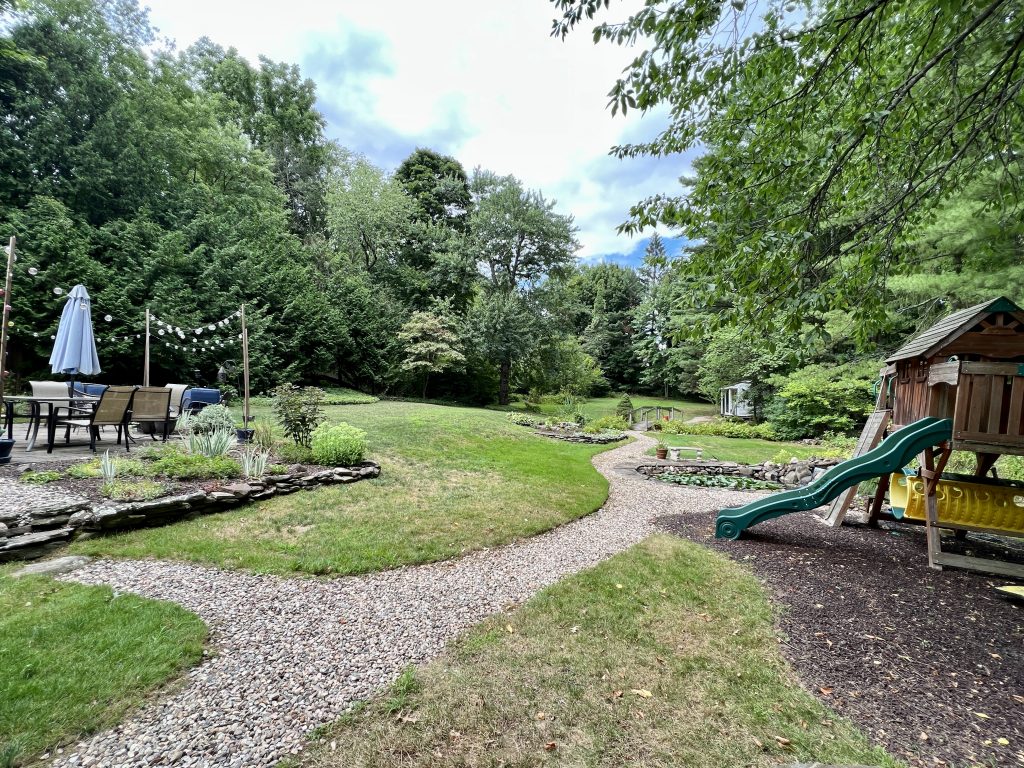 Rear yard at the home of Bill Priest and Christine Vannie. The area is near Reservoir No. 6, and wildlife sightings are common. Photo credit: Ronni Newton

He later noticed that before trying the back door, the bear had destroyed the screen in the front door – which he had repaired on Sunday – but couldn’t get in through the wooden door.

Priest said they’ve had dozens of bear sightings over the years. Last year they had a bear come to the house four days in a row and dump over the empty garbage can. “During the spring we see them probably once a week,” he said, and they came out early this spring.

The street, West of Mountain Road and north of Albany Avenue, dead ends at property that is part of Reservoir No. 6. Both Priest and Vannie said they see other wildlife as well – deer, hawks, foxes. 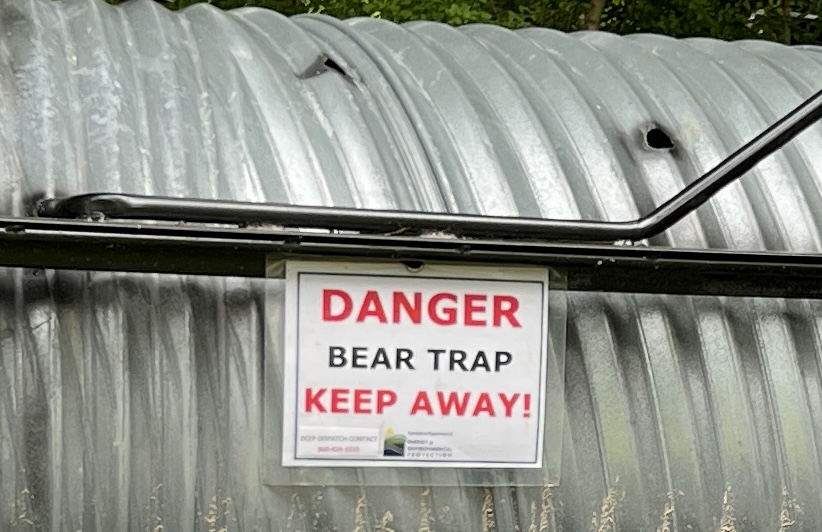 A bear trap has been set at the West Hartford home of Bill Priest and Christine Vannie. Photo credit: Ronni Newton

DEEP instructed Vannie and Priest to keep their doors and windows closed as a deterrent. “We’ve been doing that. I didn’t do it yesterday because I was home,” he said, but it wasn’t more than 10 minutes between the time he left the front yard and found the bear in the house.

In June, a bear that broke into a house in Canton was ultimately euthanized by DEEP after being deemed a public safety threat. That bear, which had four cubs nearby, had been the subject of multiple sightings and break-in attempts before successfully entering the Canton home, and showed no wariness of humans. DEEP had not been successful in trapping it. 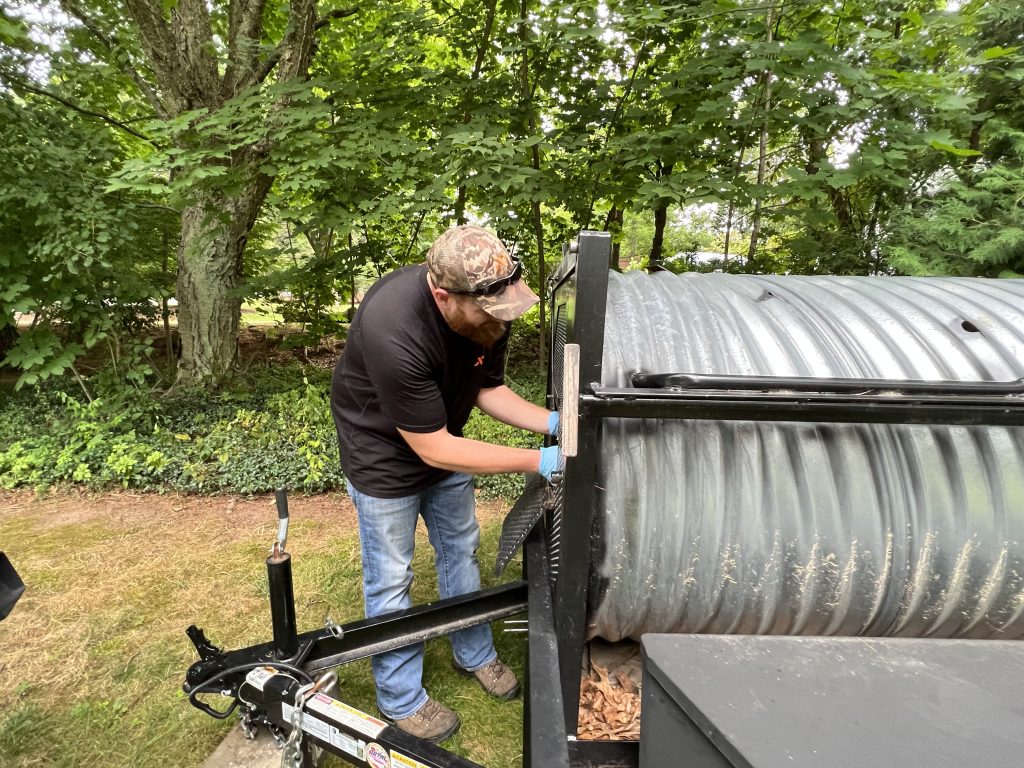 If a bear is in a densely populated area, contact the DEEP Wildlife Division (860-424-3011, Monday-Friday, 8:30 AM-4:30 PM) or DEEP Dispatch (860-424-3333, 24 hours) to report the sighting and obtain advice. The mere presence of a bear does not necessitate a problem. The department attempts to monitor bear activity in developed areas in coordination with local public safety officials. Coordination and cooperation with officials on the scene and local police officials is a key, critical ingredient in educating the public and assuring a safe, desirable outcome in such a situation.

“What Should I Do if I See a Black Bear in My Yard?

If you see a black bear in your yard, enjoy the sighting from a distance and report your sighting. However, be sure you are not doing anything to attract the bear to your yard. Attempt to scare the bear off by making noise, such as banging pots and pans, shouting or using an air horn or whistle. Once the bear has left the area, take a close look at your yard for potential bear food sources, such as birdfeeders, pet food, dirty barbecue grills, open compost, or trash, and REMOVE those food sources IMMEDIATELY. Bears have incredible long-term memory and will revisit places where they have found food, even months or years later. Bears that are frequently fed, either intentionally or unintentionally through birdfeeders or garbage, may become habituated and lose their fear of people. If a bear behaves in a way that is a threat to public safety, it may have to be euthanized by the department.

When Can I Put Out Bird Feeders?

If you choose to put out bird feeders, do so in the winter months from December through late-March when bears are in their dens. Although most bears enter dens at some point, some can remain active for portions of or the entire winter season if food is available. It is important that you remove bird feeders at the first sign of bear activity.

If you live in an area with bears, it is best to avoid bird feeders altogether. Bears that find bird feeders will often repeatedly visit the site in search of food day after day and year after year. Bird feeders and other bird food will attract bears closer to homes and humans. When bears begin to use human-associated food sources, they will frequent residential areas, lose their fear of humans, and not flee when harassed. They can even cause damage by breaking into outbuildings and homes in search of food.

For those who enjoy watching birds, establish native plants in your yard and add water features to attract birds. These methods may increase bird diversity and prevent unnatural feeding of a variety of wildlife species. Learn how you can bring wildlife to your yard with native landscaping.