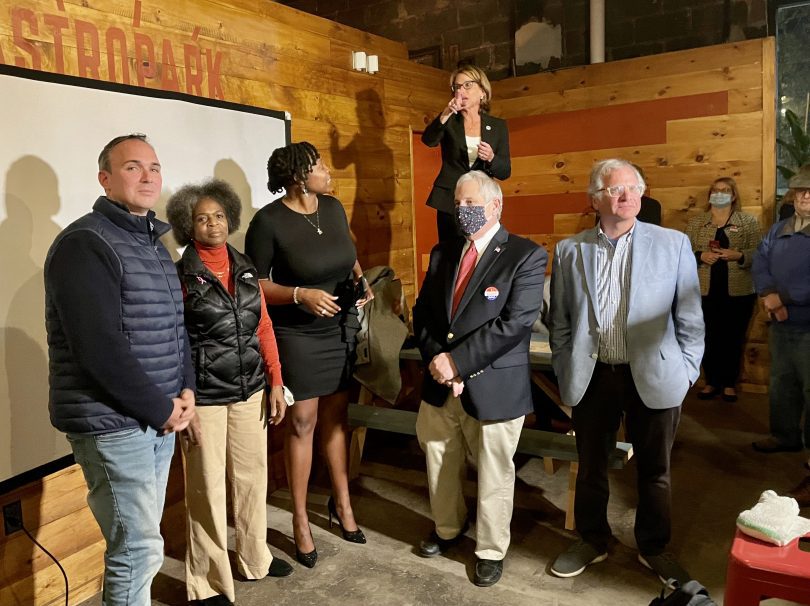 Incumbent West Hartford Mayor Shari Cantor has been re-elected with the highest vote total as Democrats retain all six seats on the Town Council by a sizable margin, while Republicans retain all minority seats, shutting out third party challengers according to unofficial results. [Updated Nov. 4 with revised vote totals from Secretary of the State website]

Certified election results submitted to the Secretary of the State by West Hartford Town Clerk Essie Labrot on Thursday, Nov. 4 include a few updates, none of which alter the outcome of the election results.

According to the updated tallies the race for the ninth seat on the Town Council, however, was closer than it appeared based on the earlier unofficial results, with just 84 votes separating Republican Alberto Cortes – who was elected – from Lee Gold, who left the GOP in the spring and ran representing A Connecticut Party. 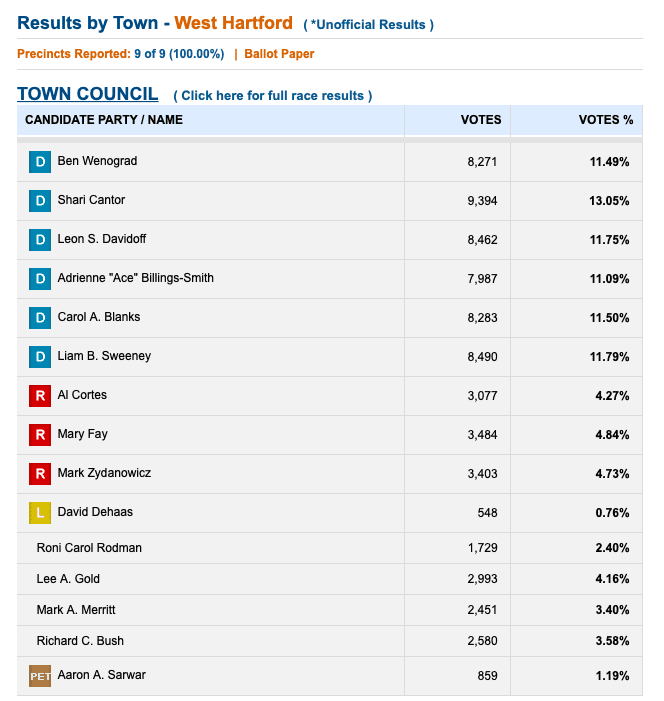 West Hartford Town Council results as of Nov. 4 from Secretary of the State’s website. Screenshot 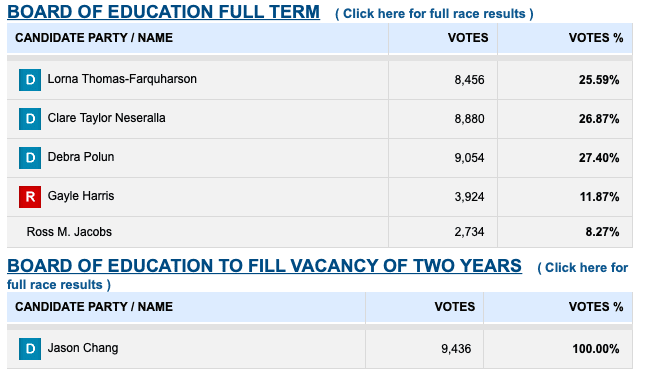 West Hartford Board of Education results as of Nov. 4 from Secretary of the State’s website. Screenshot

Just after noon on Wednesday the Secretary of the State’s website, which was not displaying any of the election results that had been entered by towns, posted the results. The Election Night Reporting System is managed by a third-party vendor, Secretary of the State Denise Merrill said in a tweet Wednesday morning and they were working on fixing the display function.

The screenshots below are the results for West Hartford Town Council and Board of Education. Vote totals indicate slight discrepancies from the numbers available last night, but do not alter the overall results of the election. 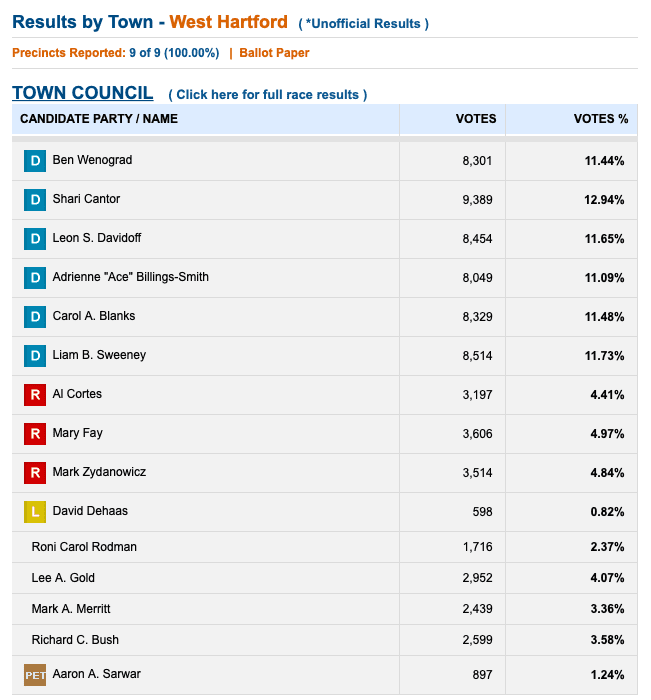 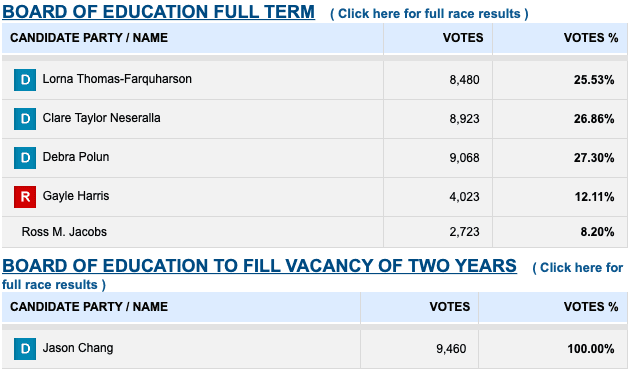 Board of Education vote totals. Screenshot from Secretary of the State website 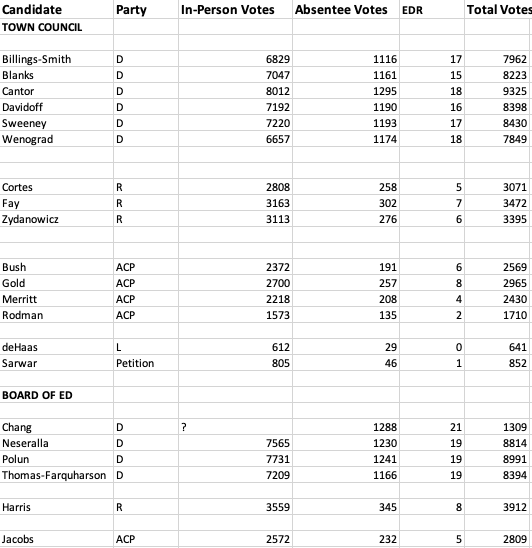 West Hartford Democrats cruised to victory in Tuesday’s municipal election with the entire slate of six Town Council candidates beating the rest of the field by a wide margin according to unofficial vote totals.

“I’m proud of our whole organization, what this team has done. We earned the respect and the confidence of the public, and the public showed their support for us today in a resounding successful finish of one through six,” Cantor said. 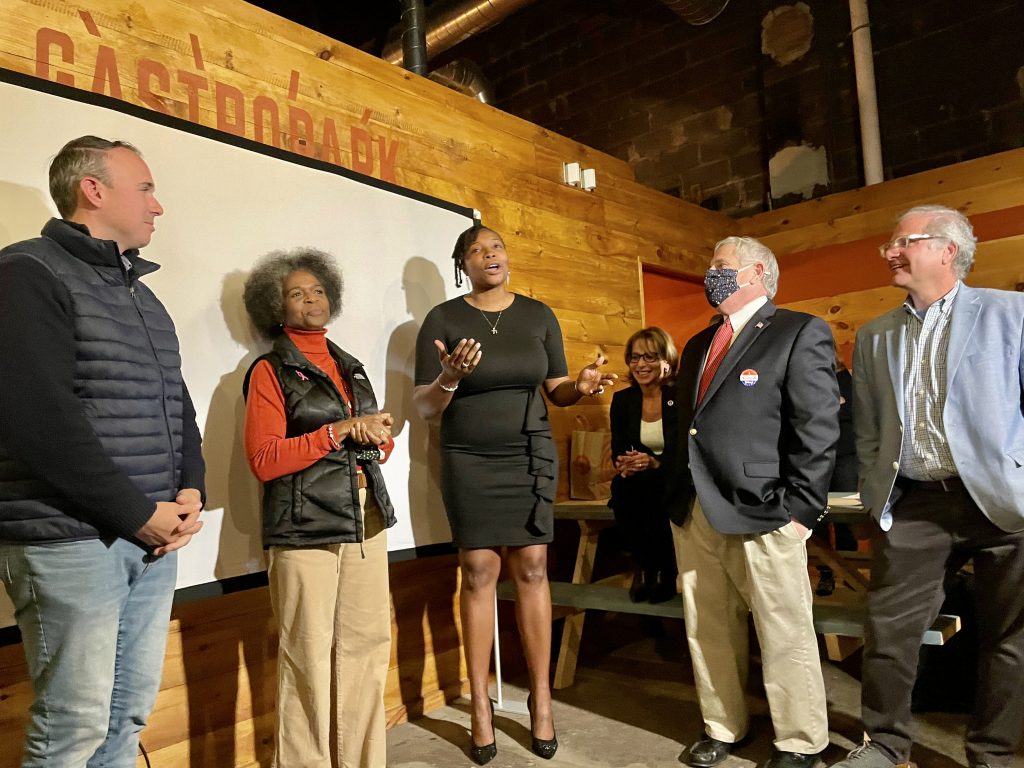 “This leadership that I’ve joined has done a great job taking us through the pandemic, dealing with our education, keeping our town safe, and continuing to build and move forward with infrastructure and development,” Billings-Smith said.

Cantor said decisions about who would be deputy mayor, and committee assignments, will be decisions made by the caucus.

“I’m so proud of everybody finishing so strong,” Cantor said.

Nine candidates were in contention for the remaining three seats, and they were swept by the Republicans who won all three minority seats on the Town Council Tuesday, with incumbent Mary Fay topping the ticket and likely to be minority leader. The Republican slate also included Mark Zydanowicz, who currently serves on the Board of Education, and newcomer Alberto Cortes, who had run unsuccessfully for Council in 2019.

The atmosphere at the Republican headquarters at Beachland Tavern was “ebullient and cautiously optimistic” as the unofficial tallies appeared to indicate a a clean sweep by the three candidates running for Town Council, and Fay said she was feeling really good about the results. 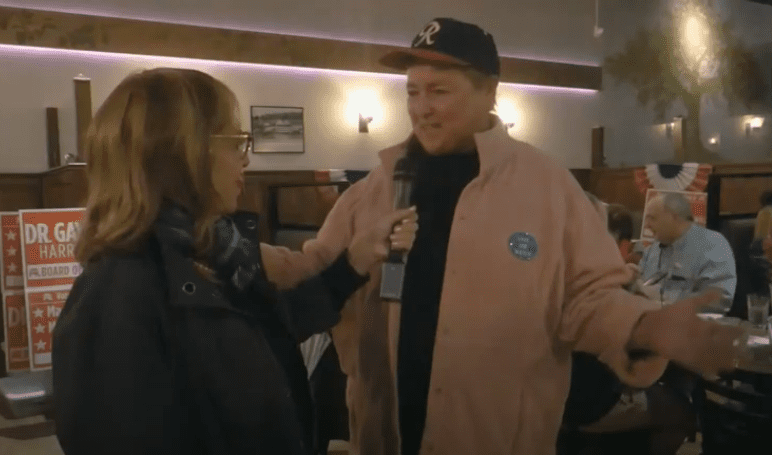 “It was a big challenge, with nine candidates running for three minority seats,” Fay told We-Ha.com. “I’m proud we swept the race, and I look forward to representing everyone to make West Hartford the best for all.”

“This is a great opportunity,” said Cortes. He said he’s looking forward to bringing a voice to the most vulnerable and representing all of West Hartford.

A Connecticut Party had high hopes for winning at least one, if not multiple, seats on the Town Council, but the celebratory atmosphere at their headquarters at Ocho Cafe was tempered as the vote tallies were posted.

Lee Gold had the highest vote total of any Republican when he was elected in 2019, and served as minority leader until he and former Republican Town Committee Chair Mark Merritt left the GOP in the spring and resurrected A Connecticut Party. They were joined on the ticket this fall by Rick Bush, who ran a close race for Council in 2019, and Roni Rodman. Based on preliminary tallies, Gold, who led the ACP ticket, trailed Cortes by about 100 votes. 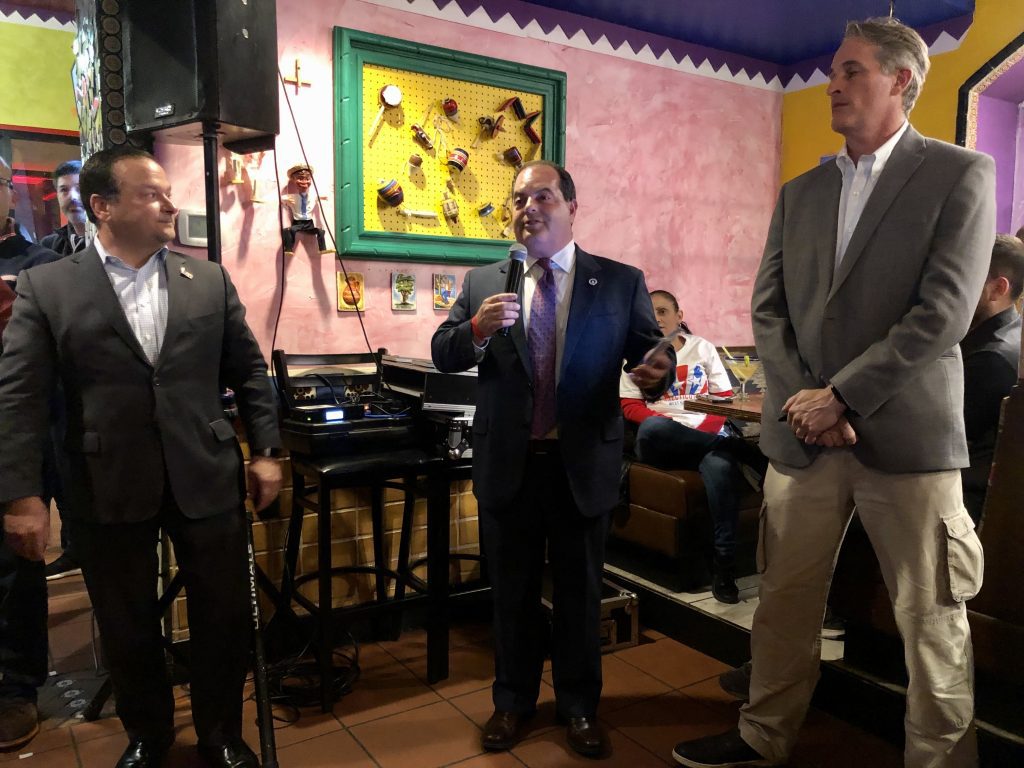 “As we are progressing and navigating these landmines of West Hartford … I do congratulate the Democrats who were elected,” Gold said in a speech to supporters, stating the town is fortunate to have Cantor as its mayor.

“Tonight I don’t think we got the results we were looking for, but there is a silver liner. We have established A Connecticut Party of West Hartford as a party in West Hartford,” Gold said. By garnering at least 1% of the total vote, he said, “it enables us to continue on this journey towards creating a centrist, rationale alternative to the noise that all of us have been experiencing on the left and the right.”

Merritt said there is still an opportunity to change the dynamic. “This is not a one-and-done thing. We are officially a party. … Stay tuned.”

“I respect and value everybody as public servants. It’s a lot to step in and volunteer for this position, no question it’s a big commitment. I know everybody cares about the Town of West Hartford and I just hope we work together to keep the town moving forward. As I always say if you stand still you lose the race so we need to keep reinventing ourselves and making West Hartford the best it can be and I hope the Republicans join us in this challenge,” Cantor said.

In the Board of Education race, two incumbent Democrats, Board Chair Deb Polun and Lorna Thomas-Farquharson, were both re-elected. Democratic newcomer Clare Taylor Neseralla was also elected handily.

Voters selected Republican newcomer Gayle Harris to the remaining open Board of Education seat, while ACP candidate Ross Jacobs was not elected.

Jason Chang, who was appointed to fill the seat vacated by Sean Pasan, was running unopposed to finish out the two years remaining in the term. 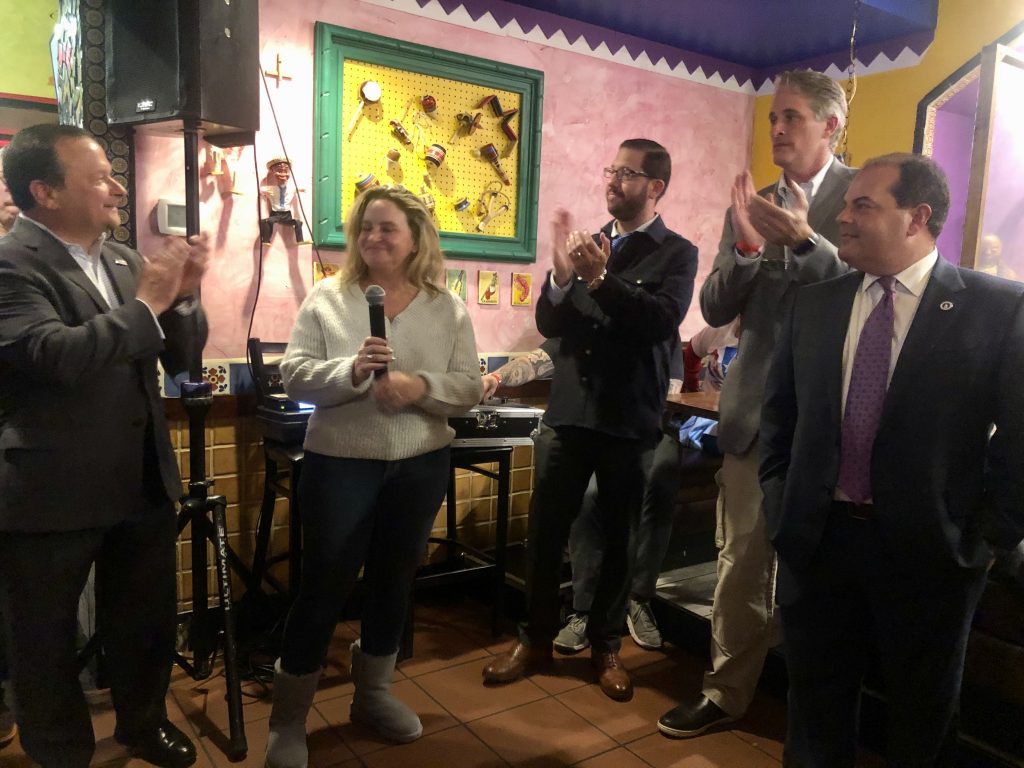 Bush said A Connecticut Party worked really hard to put together a platform that would provide a rational alternative, and did so with a positive campaign. “The major thing we proved is that there is a center,” Bush said. “The Town of West Hartford lost tonight .. five really good candidates.”

The Democratic Town Committee said their party’s decisive victories, with retention of the majorities on both the Town Council and Board of Education, reaffirm that voters are pleased with the leadership and the direction of the town.

“Results of this election illustrate why West Hartford is still a Democratic stronghold in Connecticut,” DTC Chair John Bailey said in a statement. “We said from the beginning of this election cycle that our slate represented the strongest blend of experience, fresh ideas, and diversity.”

Voter turnout, including absentee ballots and Election Day registrations, was 31.59%, according to unofficial results provided by Republican Registrar of Voters Beth Kyle. In the previous municipal election in 2019, voter turnout was 34.3%.