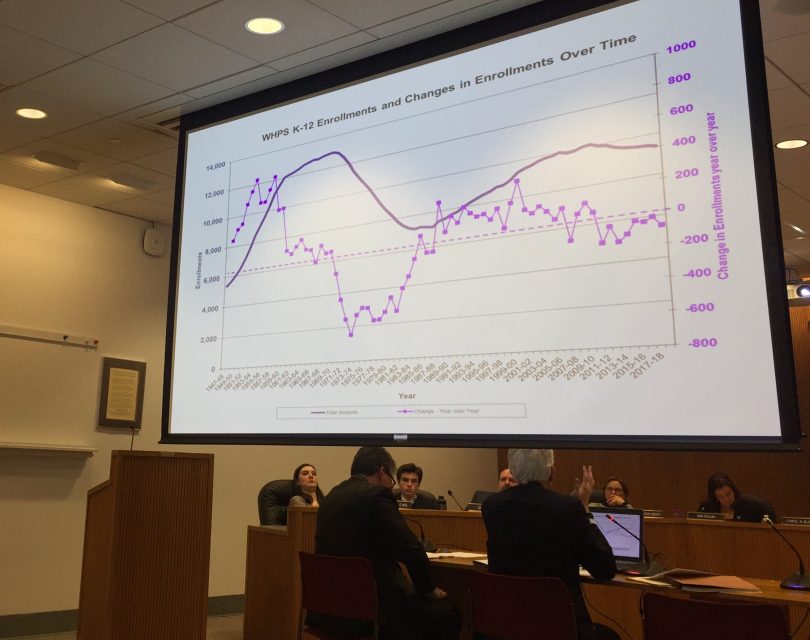 The West Hartford Board of Education receive a report on school enrollment projections on Tuesday night. Photo credit: Ronni Newton

Adequate space in West Hartford’s school buildings is anticipated, portable classrooms will be removed at some sites, and Bristow’s population will be reduced to one team of four teachers per grade.

Enrollment is predicted to continue a gradual decline in West Hartford over the next 10 years, Director of Finance and Planning Chip Ward told the Board of Education Tuesday night, and will now begin impacting the town’s secondary schools as the smaller cohort of students reaches the middle school level.

The number of classroom sections – and full-time equivalent (FTE) positions – has already been decreasing for the past several years at the elementary school level.

In response to that smaller cohort reaching middle school age in 2019, the administration is planning to reduce the population at Bristow Middle School from 140 per grade to 105 students beginning with incoming class of sixth-graders – to one team of four teachers per grade.

Superintendent Tom Moore said the impact of enrollment decline has been significant – resulting in 28 fewer classrooms district-wide. As an example, he said, that’s more classrooms than Duffy Elementary School has overall. Due to retirements, however, teachers have not had to be laid off, and he does not expect layoffs in the near future either.

Because there are fewer students, the district can now eliminate portables, particularly those which are past their useful life and are “energy pigs,” Moore said.

In terms of overall student population, the baby boom echo is over. “We’re just going back to where we were 15 years ago,” Moore said, and he doesn’t know if we will ever see a “baby boom echo-echo.”

Plans to shrink Bristow were to have been presented on Dec. 18, but that Board of Education meeting was canceled. Moore said he has met with Bristow staff twice to explain the plan, and it will be explained to parents at upcoming fifth grade information nights.

Moore said that reducing the size of Bristow will allow for complete teams at all of the middle schools. About three fewer kids from each elementary school will have a lottery number selected that will give them a chance to attend Bristow, but that lottery will be held from a smaller pool of students, so the percentage chance of getting into Bristow will not really change.

“We believe that this won’t impact the program at Bristow,” Moore said. Statewide, a 315-student middle school is not considered a small school, he added.

Assistant Superintendent Andy Morrow, who was formerly the principal at Bristow and whose children attended the school, said that although the population has not fluctuated, the school has had multiple team formats since opening. While change is not easy, Morris said, Bristow “will still have the character of the school and exceptional teachers. … [It’s] better to do it this way than to deal with half teams at the other two schools because that doesn’t provide the sense of community that we need at the middle schools.”

Moore said he understands that not everyone is happy about the decision, including some of the staff at Bristow, but they do agree with the team concept at the middle school level.

“Bristow is not closing,” Tom said in response to a direct question from Board Chair Carol Blanks. “That’s not happening.” This is just establishing a new size for the school.

Bristow opened for the 2005-06 school year, at a time when enrollment was increasing and with 2,200 middle schoolers there there was significant overcrowding at both Sedgwick and King Philip middle schools, Ward said. Until now the overall middle school population has been relatively constant.

Sedgwick and King Philip both have a population of roughly 900 students – three teams per grade with about 100 students per team. When Bristow was designed, its size was planned so that the other two middle schools could be at their current population.

Ward said that it makes the most sense to drop the number of spaces at Bristow from 140 per grade to 105 per grade, and have a team of four teachers rather than six teachers per grade. Unified arts rotations will be reduced from six rotations to five due to the smaller population. World language is already outside of the team structure, Ward said, and administrative needs will be reviewed as the population shrinks.

In his report, Ward said that district-wide enrollment for the current year, 2018-19, is at 9,313 students, 77 fewer students than the number enrolled the previous year. Ward is projecting that 9,223 students will be enrolled in West Hartford Public Schools next year, a decline of 80 students.

Based on declining birth rates and statewide enrollment trends, Ward is projecting a gradual decline of 91 students per year, to a total population of 8,400 students for the 2028-29 school year.

Ward has been producing enrollment projections for the Board for 20 years, but this will be his final report since is planning to retire. Moore said that West Hartford is very lucky, because other districts have to contract out this type of work.

Ward’s thorough presentation is an analysis of the “Cohort Survival Rate” (CSR) which tracks a cohort of students in West Hartford from birth to kindergarten and between grade levels.

The enrollment analysis dates back to 1947-48, when the population was 5,402 and began rapid growth of 575 students – more than one elementary school’s worth – per year. In the 1970s through mid-1980s, the enrollment dropped from a peak of 12,826 to 7,283 – a decrease of about 425 students per year, Ward reported. During that decrease, elementary and middle schools were shuttered.

The current rate of decline is at a much smaller level than that experienced at the end of the baby boom, Ward said.

The elementary schools recently peaked at about 4,700 students and that population is now about 4,000 and is projected to decline to roughly 3,700 over the next 10 years. Middle schools and high schools have stayed constant but will begin a decline.

There is adequate space at all school levels I the short and long term, Ward said, and “no significant capital investment to address space needs is contemplated.”

Several residents addressed the Board during the public comment session before the meeting, and expressed their concerns about the reduction in Bristow’s size.

“For some students a smaller school is just a better choice,” said Bristow parent Stephanie Rauch, “but smaller is not necessarily better,” she said.

Rauch’s son Christopher, a Bristow seventh-grader, said he fears that activities at Bristow will be canceled if there are not enough participants. He also said that some students may be less likely to want to attend Bristow if their friends are not going there.

Bristow PTO President Jerel Rocktaschel read a statement that he had earlier sent out to the school community expressing his concerns.

“I don’t believe this news has been publicized well and current fifth grade parents are not being presented with the new reality of Bristow. I also believe that parents have not had the opportunity to present their opinions on this matter,” Rocktaschel said. “One of the aspects of Bristow that I especially like is the opportunity for the entire student population of West Hartford to be represented in one school. My daughters have made friends with students from neighborhoods outside of our vicinity and that was facilitated at Bristow. Smaller class sizes will reduce these interactions, which is something that is not replicated elsewhere in the district.”

Bristow families are happy with the school as it is, Rocktaschel said, and he urged the Board to reconsider.

Ward’s complete report can be found here as an attachment to the Board of Education agenda.