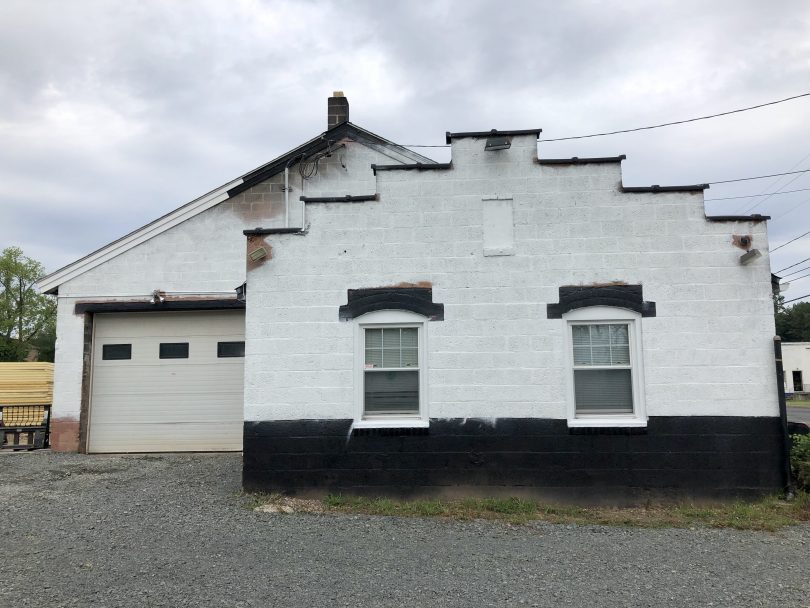 The exterior of the former Kelsey's Auto, soon-to-be GastroPark, has been painted white and is ready for signage and a late August/early September opening. Photo credit: ROnnI Newton

Build-out is still in progress, but Tate Norden, owner of West Hartford’s food truck park, said the opening of the first phase of GastroPark should happen before Labor Day. 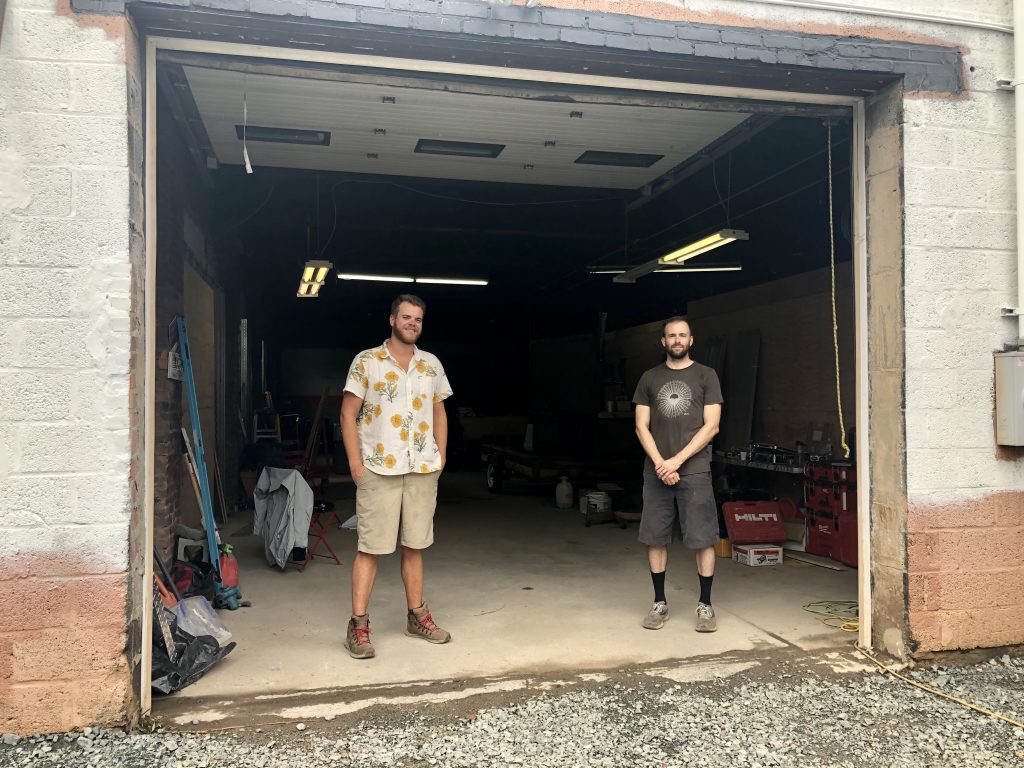 Tate Norden (left) and James Malek stand in what will soon be the glass doors opening to GastroPark at 637 New Park Ave. Photo credit: Ronni Newton

It’s been a long time coming, but GastroPark, West Hartford’s first-ever food park, is poised to open its first phase in just a few weeks at 637 New Park Ave.

“In late August/early September, we can open the outdoor area only, with the bathrooms,” GastroPark owner Tate Norden said this past week.

With restrictions on business operations still in place due to the COVID-19 pandemic, an open air space to “gather and graze” as the GastroPark tagline states, will be a great asset to the community.

There is space on the property for up to four food trucks to park at any one time, where there will a variety of seating options for people to enjoy their food and drink (with plenty of space for social distancing), fire pits, and an area dedicated to lawn games like bocce and cornhole. 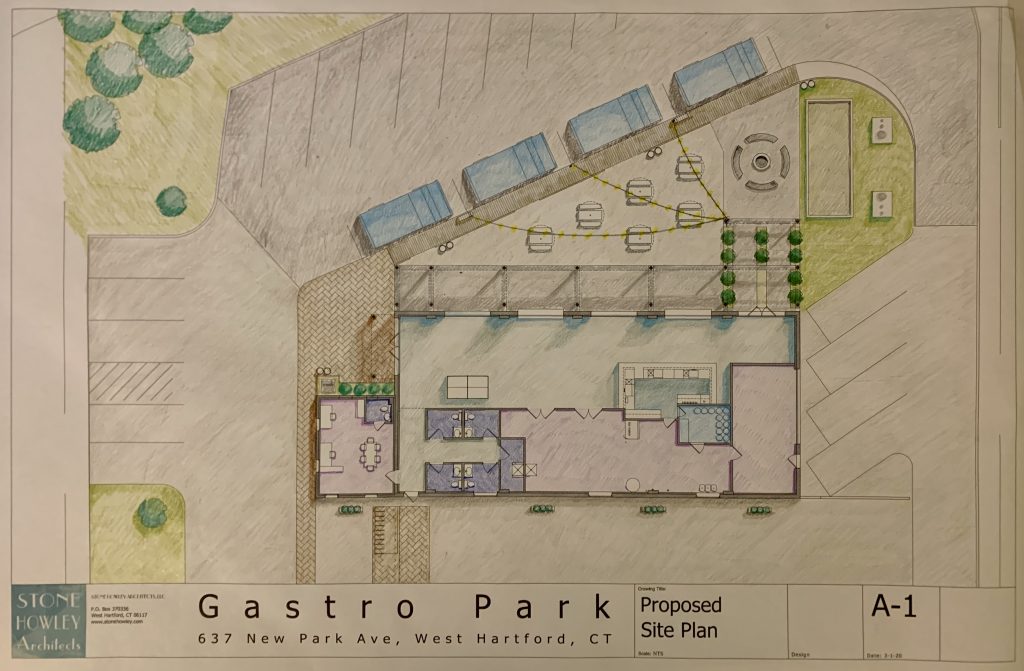 Rendering of interior and exterior of GastroPark. Courtesy image

It’s taken about three years, and the passage of an ordinance by the Town Council (in March 2017) followed by modifications to that ordinance, but the West Hartford community will soon be able to “gather and graze,” in a fun and casual environment.

“We’re trying to take a dilapidated, underused venue and breathe new life into it so we can showcase the state’s food trucks, delicious beer scene, wine, and a variety of different types of entertainment in the form of music, art, and other cultural gatherings that will bring people together,” Norden said in a promo video posted on YouTube.

Norden’s own popular Iron & Grain food truck, a repurposed 1959 Chevy Viking with a wood-fired grill – will frequently be offering its fare (like the famed black and blue sliders and street corn), but the goal is to have a variety of different types of trucks throughout the day.

“It will fluctuate based on demand, but will will try to have a lot of different experiences,” Norden said.

“The restaurant industry is really being hit hard, looking for new ways to drive revenue,” Norden said. Food trucks can provide that solution for experience restaurateurs as well as those who are up-and-coming or looking to try out new concepts.

GastroPark will also have beer and wine available, a selection of local, regional, and other quality offerings curated by Vice President and Beverage Director James Malek, who many may know from Savoy. Malek, along with Vice President and Business Manager Shari Vikmanis, are partnering with Norden for the GastroPark venture.

Malek said there is an awesome pool of food trucks with talented chefs that plan to frequent GastroPark.

There are a lot of food trucks in Fairfield County that aren’t as well known in the West Hartford area, and Norden said GastroPark is looking to “be curators” to expand their scope.

“We will have a really diverse, rotating lineup that will make GastoPark an attractive location,” he said.

The intent is to have something for “everyone” – kid-friendly fare included, to make the park a destination for a mid-day bite and a family night out, or a place to have dinner and a drink in a laid-back environment.

“We’ll also have WiFi and plugs, so people can have meetings here,” Malek said.

Ultimately the indoor space, the second phase of GastroPark, will have seating for about 40 people as well as a private area that can be rented out for groups of about 20-25, with a dedicated server and its own access to the outdoor food truck area.

Stone steps lead to a raised garden area which will be maintained by Knox, the organization that supplies the town’s planters in Elmwood and Bishops Corner. Ten percent of rental fees will be donated to the nonprofit, Norden said. 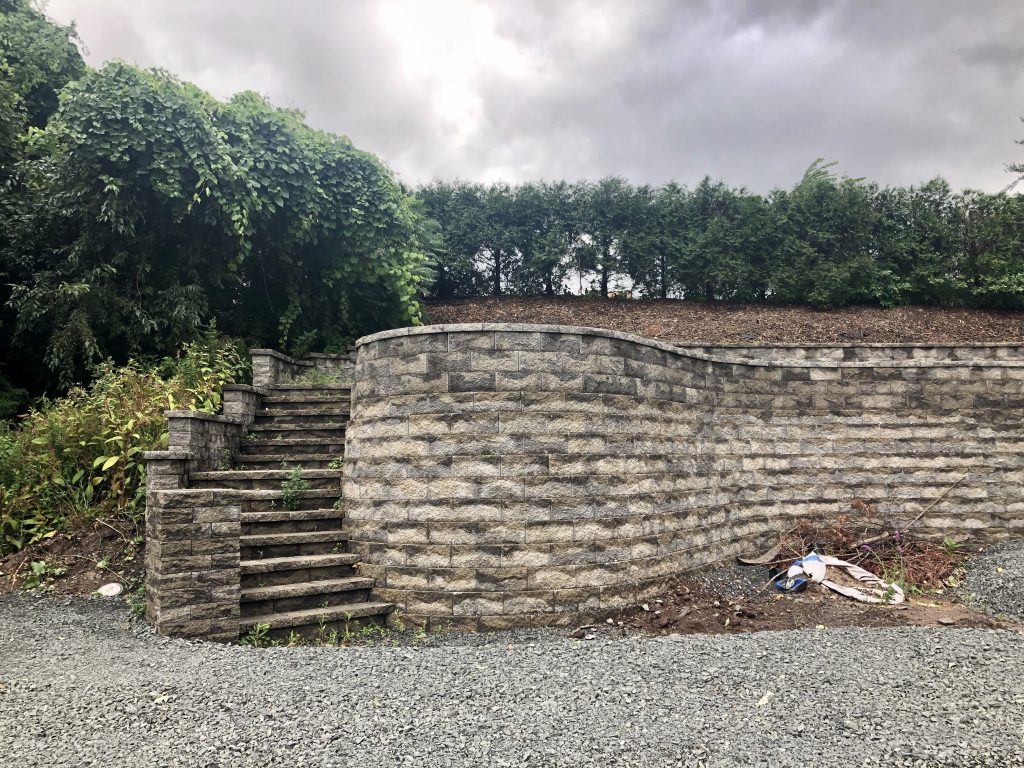 Stone steps lead to a raised garden area. Knox will maintain the gardens, and will receive a portion of rental income as a donation. Photo credit: Ronni Newton

The former auto shop is ideally suited for the industrial look of GastroPark, where reclaimed and upcycled materials are not only decorative but also part of the mission. Outdoor tables were once used for hydroponic faring, and industrial spools are also being crafted into tables.

“We like to do as much recycling as possible,” Norden said. 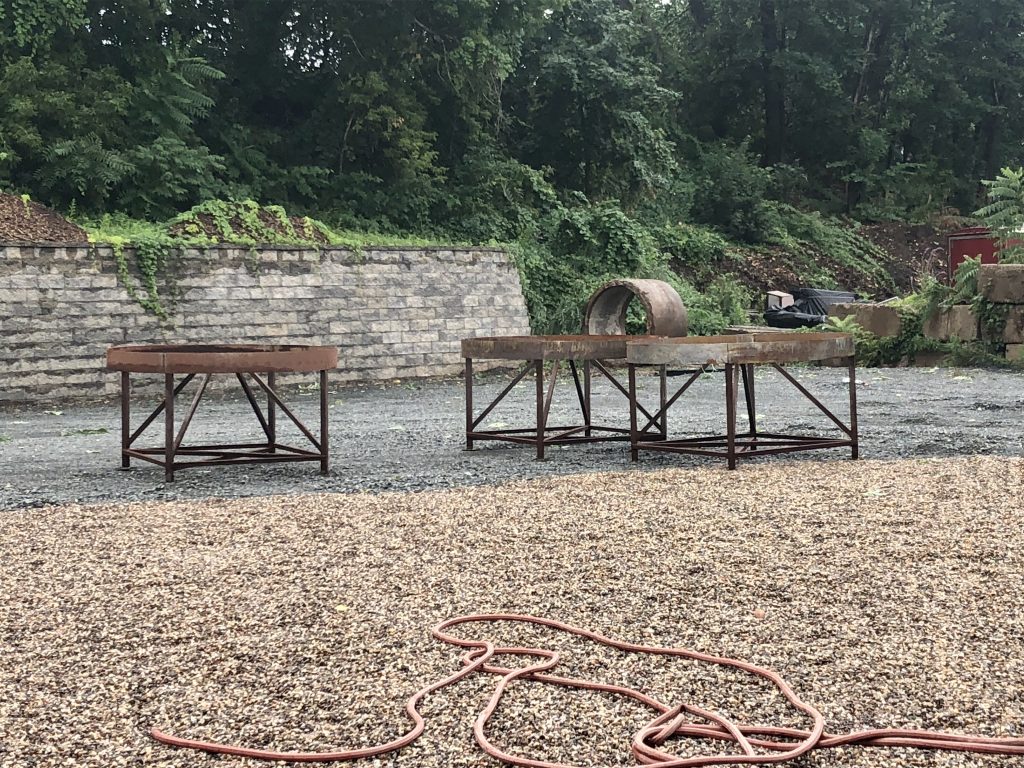 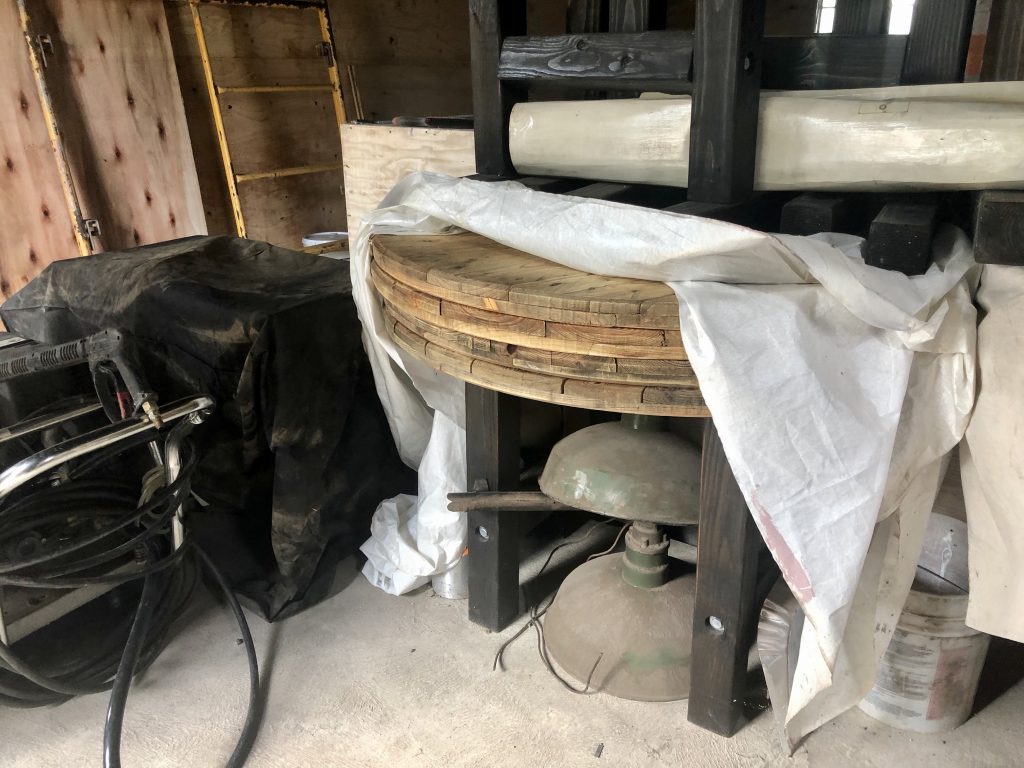 Once the remainder of the build-out is done, the interior seating will be available allowing the GastroPark to comfortably be open year round. In the meantime, there will be propane heaters for gathering outdoors even if it’s a bit chilly.

GastroPark will initially be open Thursday through Sunday, with evening-only hours on Thursday and Friday, but open at lunchtime on Saturdays and Sundays.

“We will gauge how things are going, and hope to add Wednesday soon,” Norden said. Eventually they hope to expand to lunch and dinner Wednesday through Sunday, and perhaps even offering some breakfast options.

GastroPark also has an Indiegogo crowd funding campaign which runs through Sunday, Aug. 9, offering a variety of merchandise and discounts to founding investors.

We want to bring people together “and food throughout the history of time has been the number one method for doing that,” Norden said.

He’s optimistic that GastroPark will do just that – and add another element of vibrancy to the West Hartford community. 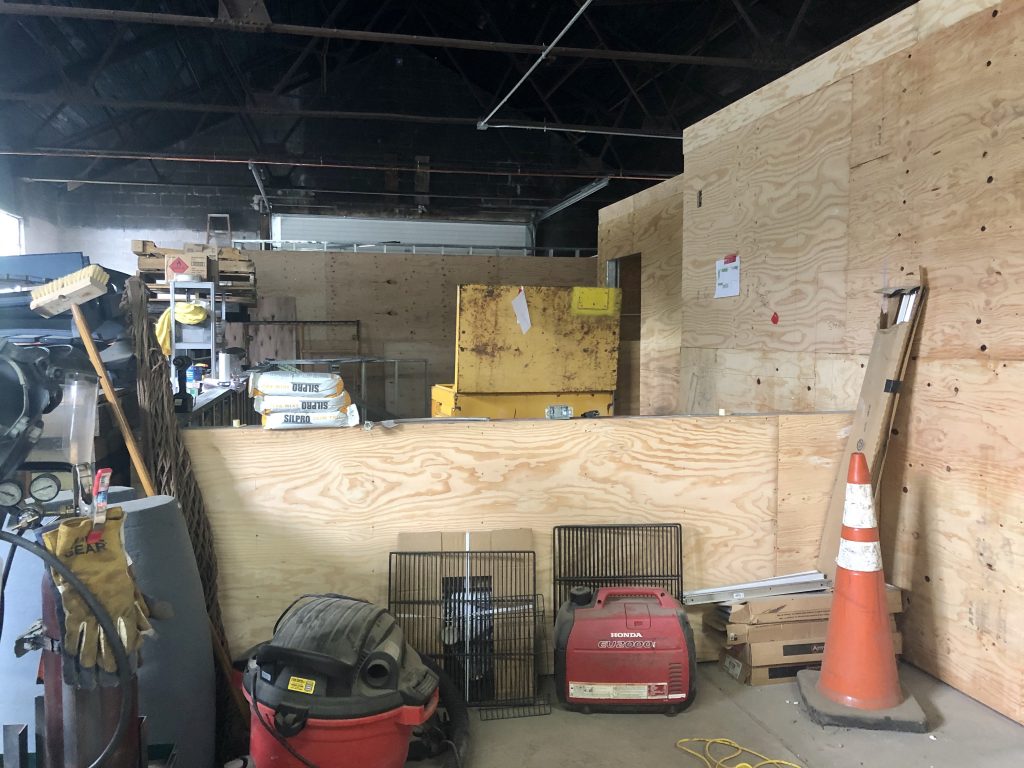 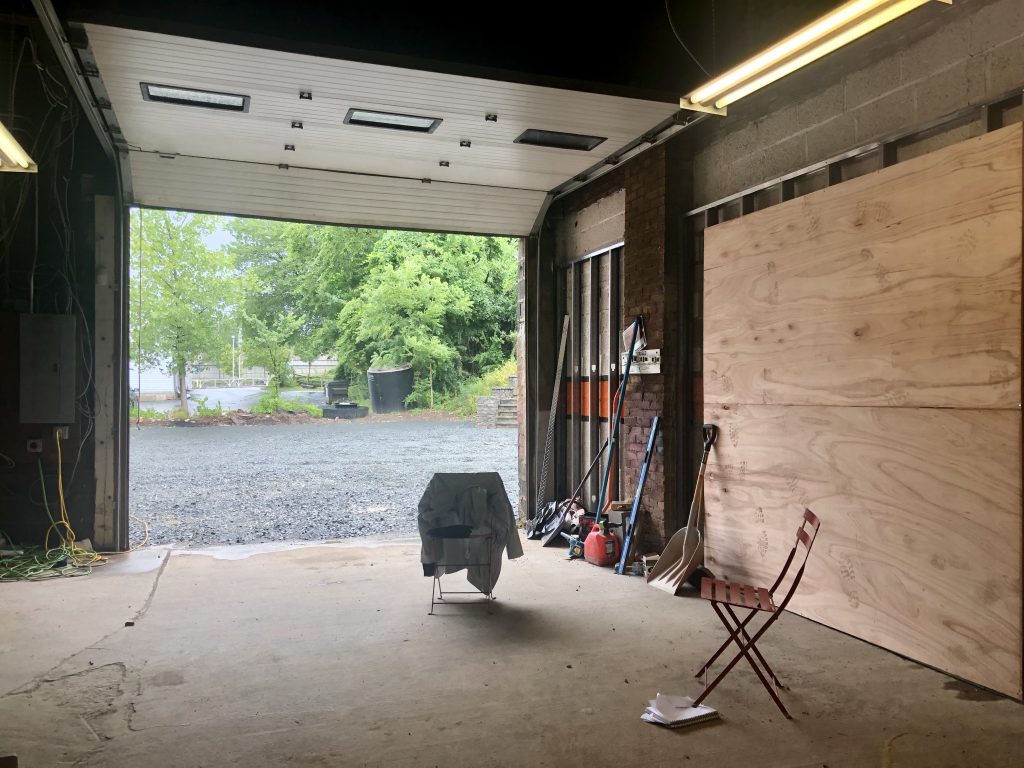 Glass doors will replace the garage door as the entrance to GastroPark. Photo credit: Ronni Newton