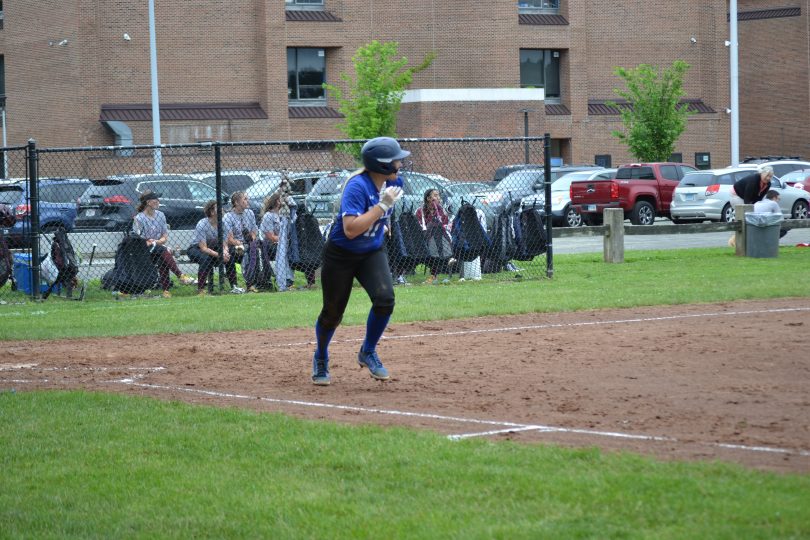 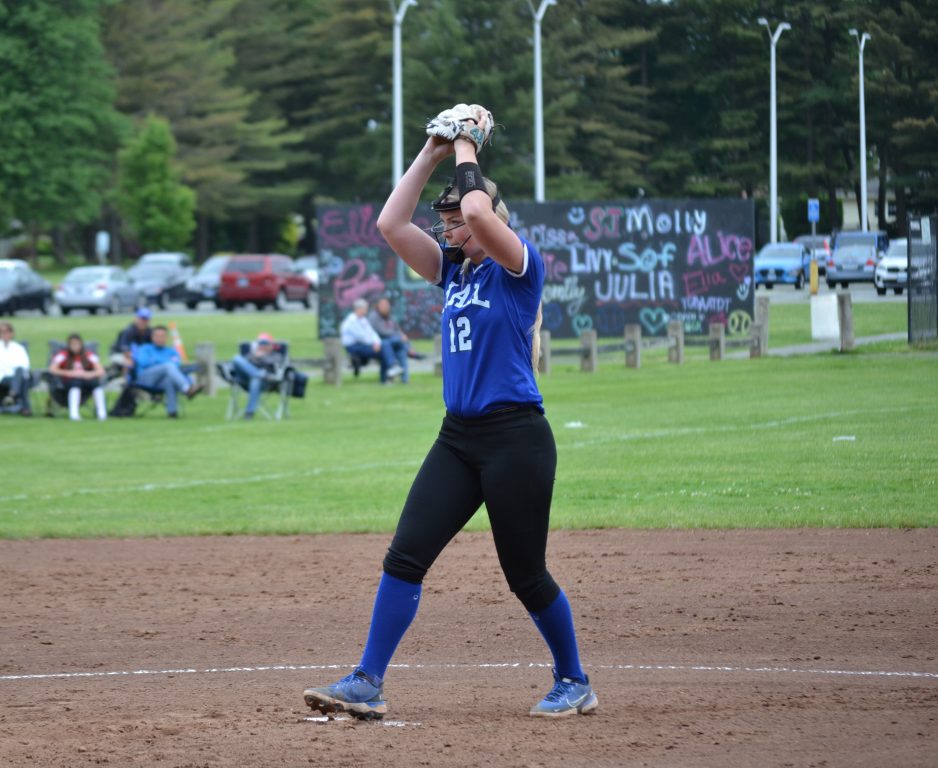 “We need to play better because we got away with one today.”

Hall softball coach Becca Lewis summed up the Warriors 3-2 win over Naugatuck with a clear message to her team. A day after Sophie Garner-MacKinnon tossed a no-hitter and nearly had a perfect game, she and her teammates had to gut out theirs second round playoff win over a talented Naugatuck.

From the start, it was obvious this game was going to be tougher than their tourney opener with New Canaan. The Greyhounds made Garner-MacKinnon work hard from the opening inning, fouling off pitch after pitch. Pitcher Sophia Audi of Naugatuck got out of an early jam in the first after Hall put two runners on base but could not score. 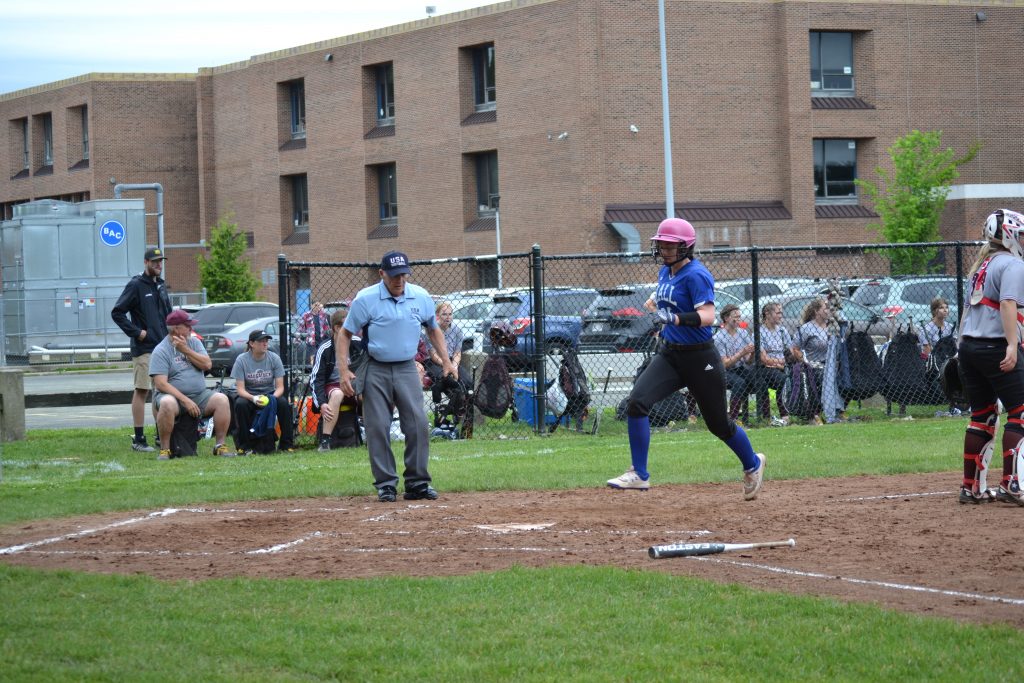 The Warriors put together their best offensive inning of the game in the bottom of the second. Tessa Hache, who followed Tuesday’s outing with another strong game, led off with a single to left center. After a strikeout, Steph Markie laid down a sac bunt to move Hache to second. Jackie Hamad followed with an RBI single to left and Hall was up 1-0.

Senior Genevie Nelson took an Audi pitch into deep right field for an RBI triple. Piper Garner-MacKinnon followed with an RBI single of her own to make it 3-0. The Warriors had a runner at first and second with two out when Sophie Garner-MacKinnon hit a ball to the  shortstop. As Nadia Cestari moved to the ball, she collided with Piper Garner-MacKinnon and the umpire ruled interference by the runner to end the threat and the inning.

The offense came from the bottom of the lineup, and Lewis was happy to see it. “They came through today. They have been putting in the work at practice and it was great to see them have the success,” the coach said.

Naugatuck would finally break through in the top of the fourth, when Hall committed the first of its three errors in the game. Cestari hit one back to the mound and Garner-MacKinnon could not handle it. Hache then made one of the game’s best catches when she slid into the fence while catching a foul pop. Cestari took advantage of it to move onto second. Audi then helped her own cause when her ground ball ping-ponged off the gloves of Maddie Peterson at third and Piper Garner-MacKinnon at short. By the time Hall got on the ball, Cestari had raced home to make it 3-1. In what was the toughest inning for Sophie Garner MacKinnon in the game, she would get the next hitter to fly out and then recorded her seventh strikeout to end things. 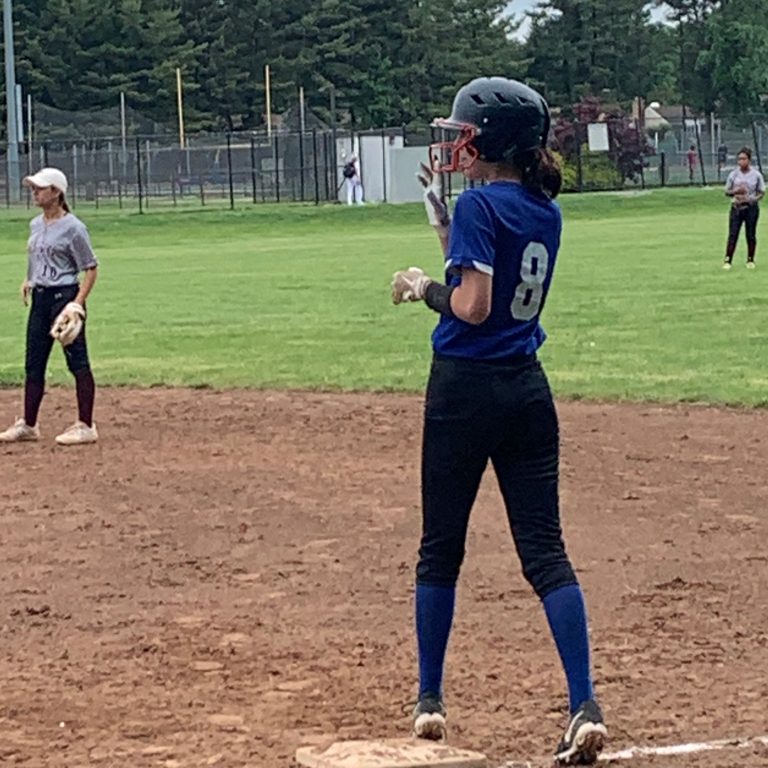 Audi and her teammates then started flashing the leather themselves over the next two innings. First it was Cestari taking away a base hit from Piper Garner-MacKinnon with a diving stop on a ground ball, and a throw to first from the seat of her pants. An inning later it was Naugatauck centerfielder Lauryn Ramalho who put on the show. First  she tracked down Sophie Garner-MacKinnon’s long drive. Then she made a headfirst diving catch on Jane Grove’s sinking liner.

Ramalho also got the inning’s third out when she put away Hache’s fly ball. “We had one really good inning, but then we struggled to string together hits, and they had some great defensive plays,” said Lewis.

Heading into the top of the sixth, Garner-MacKinnon had nine strikeouts and three of the last four batters she faced. She got the lead hitter to pop out to catcher Steph Markie on an attempted bunt. But a single to Cestari was followed by a fielder’s choice that put a runner on second with two outs. Aryn Bombrey reached on an error and Cestari came in to score the second run for Naugatuck on a single by Audi. With 2 on and 2 out and the Greyhounds building momentum, Garner-MacKinnon got strikeout number 10 when she fanned Samantha Mullin.

In the bottom of the sixth Hall threatened to score again when Jordan Frankel led off with a single to center. Once again Markie laid down the sacrifice bunt and was out at first. But when Frankel strayed off second base, Naugatuck’s Sophia Onofrio tried to catch her with a throw to second and the ball sailed into left field – which was vacant as the fielder had come in to back up the play. Frankel raced to third while Naugatuck players raced into left to retrieve the ball. Frankel slipped as she rounded third and had to scramble back to the base, but that was as close as she would come to scoring as the next batter struck out and that was followed by a pop out to first.

It came down to the final inning, as Hall led by one, and Naugatauck would have to score to extend the game into the bottom of the inning or beyond. Garner-MacKinnon got strikeout number 11 on the first hitter she faced. Onofrio would follow that with a clean single to left center and the tying run was on first. 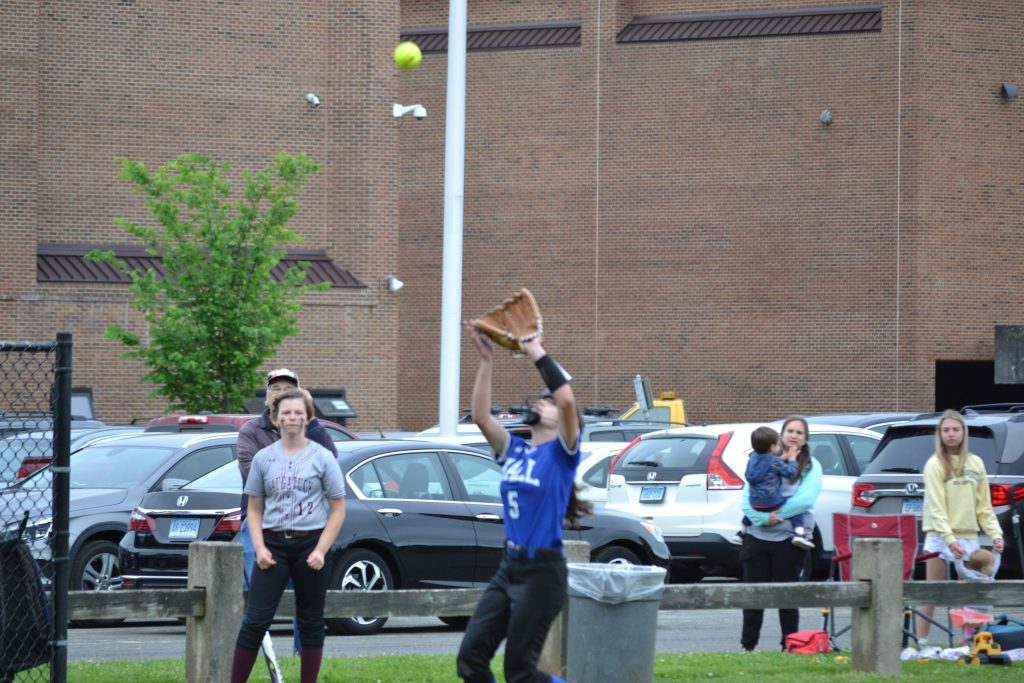 Maddie Peterson makes the catch for the final out of the game. Hall vs. Naugatuck. Class LL second round softball tournament. June 1, 2022. Photo credit: Paul Palmer

The Duke bound Garner-MacKinnon then struck out Cadence Hoffman and got Mullin to pop out to Peterson in foul territory to end things.

“This time of year, it is survive and advance,” Lewis said. “I know we can play better.”

The Warriors improved to 18-3 on the year and as the No. 6 seed will now have to travel to No. 3 seed Fairfield Ludlowe (21-1) in a quarterfinal showdown on Friday. Hall will be looking to get back in the tournament semifinal for back-to-back seasons. If they take down the Falcons, the Warriors might then face archrival Southington in the semifinal. In the 2021 version of that semifinal matchup, it was Southington winning that game on the way to the Class LL title.