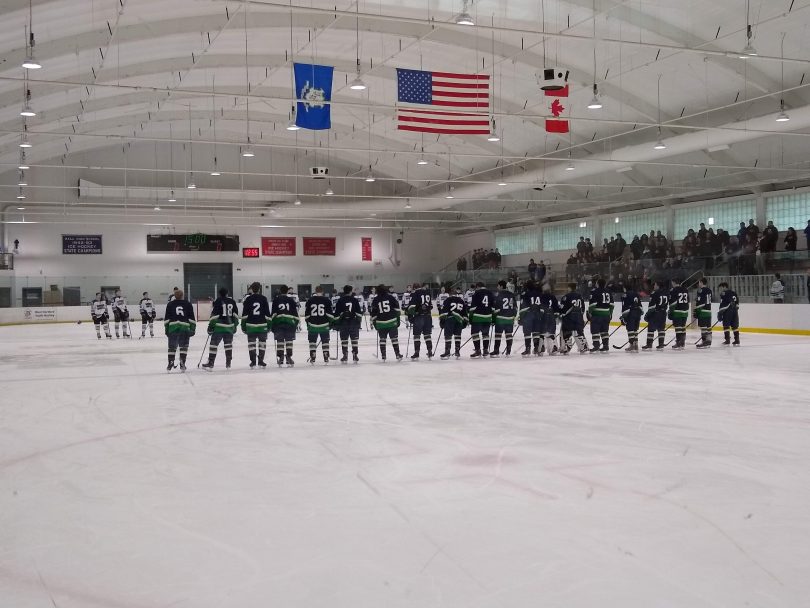 Despite surges by Northeastern to try to close an early gap, Hall-Southington holds on to win its second game in a row.

A four-point effort from Duncan Hollander and strong play on special teams powered Hall-Southington in a 5-2 victory over Northeastern Saturday afternoon at Veterans Memorial Skating Rink in West Hartford.

Duncan Hollander put the Warrior-Knights on the board first with a goal one minute into the game, as Roach found him in the slot from behind the net. Roach tallied his goal on a rebound to make it a 2-0 game at the 10:33 mark.

Hudson Hollander scored from just inside the blue line to give Hall-Southington a 3-0 lead with 3:23 left in the first period.

Noah Fleming answered for Northeastern (0-1) with 2:11 remaining, assisted by Patrick Frommer. Fleming scored from Frommer again – 54 seconds into the second period – to cut the margin to 3-2.

“I liked the way we started, and then we kind of got stuck in a ditch there for a little while right towards the end of the first period,” said Hall-Southington head coach Brian Cannon. “In the second period, I thought we could have been stronger. I’d say we got a little bit better as the game went on. The other team woke up a little bit, and they played us harder so we weren’t having quite the success around the rink.

Brew scored a power-play goal to give Hall-Southington a 4-2 lead with 3:41 left in the second period.

After 2: @Southhallpuck 4, Northwestern 2. This power play goal by Cody Brew made it a two-goal game again at the 3:41 mark. #WeHa #cthk pic.twitter.com/XCNQUa3Iyv

Duncan Hollander added a power-play goal on a deflection five seconds into the Warrior-Knights’ man advantage at the 10:24 mark in the third period.

The Warrior-Knights killed three of their six penalties in the last five minutes of the game – including 80 seconds of 5-on-3 time – to keep the Shamrocks’ final push at bay.

Cannon credited Roach and the Hollander brothers in helping the Warrior-Knights’ efficiency on special teams.

“I thought they had a great game,” he said. “The penalty kill was really good. We were 100 percent on special teams today. The power play scored two goals – 2-for-2 – and we didn’t give up any shorthanded. Those three guys were all part of those combinations as well. Good day for them.”

Returning to coach Hall-Southington after treatment for synovial chondrosarcoma, a rare form of cancer that required amputation of his right leg and part of his pelvis and hip joint in the offseason, Cannon said his players can use his experience as a means to fight through adversity later in life.

“We’ll see,” Cannon said. “I think that’s more of a long-term, life thing for them as opposed to a little thing inside the hockey season, but they’ve been very supportive of me, so it’s certainly been a rallying point. I think, later on in life, as they meet challenges, hopefully they’ll take that as ‘You can’t just sit there and pout. Do what you can do.’”