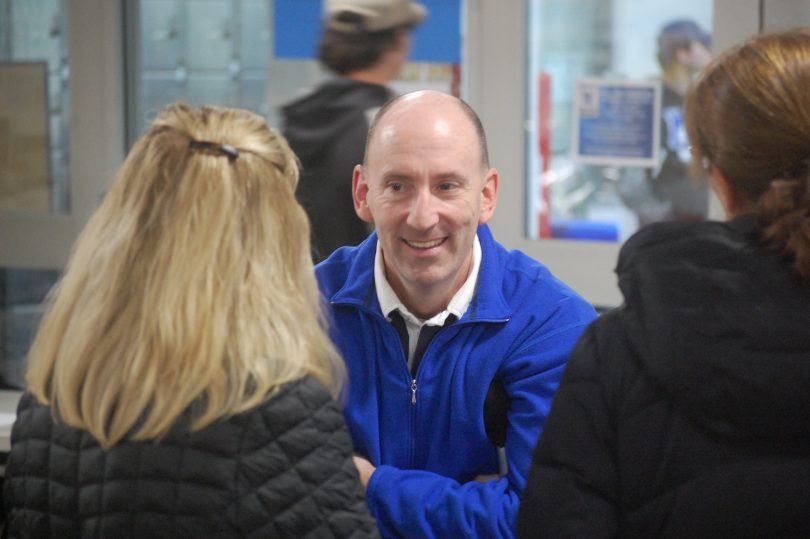 West Hartford resident Brian Cannon, head coach of the Hall-Southington boys hockey team, may not be able to skate but that hasn’t stopped him. 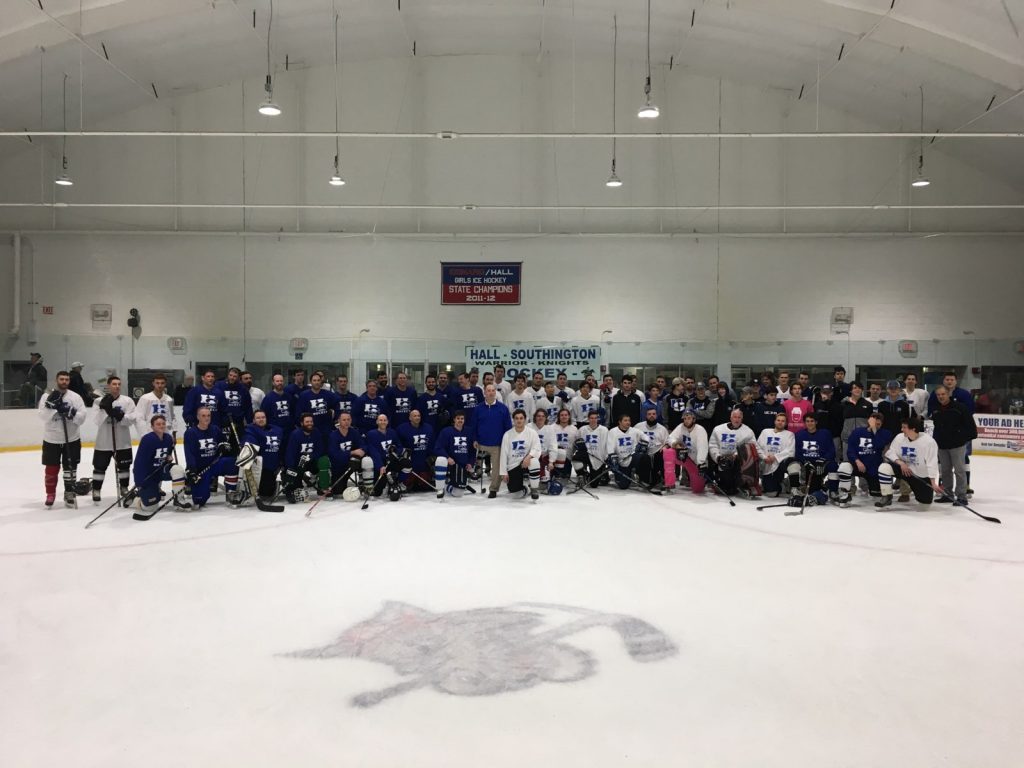 More than 60 hockey alumni from Hall and/or Southington showed up to support Brian Cannon on Nov. 30 at Veterans Memorial Rink. Courtesy photo

Brian Cannon has hung up his skates, probably for good. The high school hockey coach from West Hartford didn’t have a choice because he only has one leg after he had the other one amputated last summer. 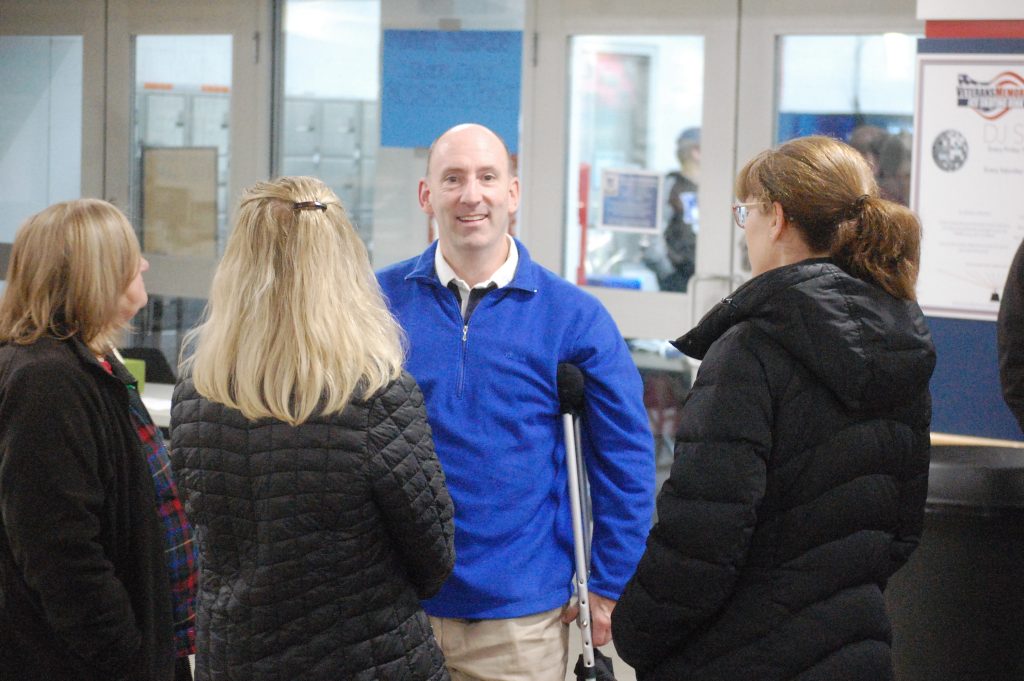 Longtime Hall-Southington boys hockey coach and West Hartford native Brian Cannon now uses crutches but has resumed his role as head coach despite amputation of his right leg and part of his pelvis after a cancer diagnosis this summer. Photo credit: David Heushkel

And yet Cannon isn’t ready to hobble away from the sport on crutches. He still craves the chilly air inside a rink, a refreshing reminder that he is in a place where he needs to be this time of the year.

He still loves to hear the sound of skates shredding the ice, the noise a puck makes when it is passed from one stick to another or shot with authority towards the net, because it reaffirms to Cannon that he’s in a good place. Even the unmistakable odor of a locker room is a comforting smell.

More than ever, Cannon’s senses will come alive this winter because he’s thankful to be alive. The longtime coach of the Hall-Southington co-op team is grateful he didn’t lose his battle with a rare form cancer. He lost his right leg and part of his pelvis. He didn’t lose his desire to coach.

“The biggest problem I have right now? How do I carry a pizza,” Cannon said. “That’s one of my biggest dilemmas right now. If everybody had that as their biggest problem, life is good.”

Those who are closest to Cannon know it’s not his nature to complain about anything. The same folks know he’s not one to lie down or turtle when faced with adversity, even something as life-altering as losing a limb.

But everyday life hasn’t been the same for Cannon since he was diagnosed with Synovial Chondrosarcoma after an aborted hip replacement surgery July 26. Following further tests and consultations with doctors at Hartford Hospital, Massachusetts General, and Memorial Sloan Kettering Cancer Center in New York, Cannon was told that his entire right leg and right side of his pelvis needed to be amputated.

“I’m dumbfounded. You’ve got to be kidding me?” Cannon said. “I just took it matter-of-factly. Hey, it is what it is. It’s hard to believe when you go in for a hip replacement and you’re going to lose half your pelvis and a whole leg. It’s kind of hard to swallow.”

The news was digested with tongue in cheek by Cannon’s family.

The iconic lamp from “A Christmas Story,” with a skate added, on display at a Hall-Southington alumni event at Veterans Rink on Nov. 30. Photo credit: David Heuschkel

Upon hearing the doctor explain that Cannon would probably have his leg amputated, someone in the room jokingly asked if a lamp shade could be placed on top of it, a light-hearted reference to the iconic leg lamp prop in the holiday classic “A Christmas Story.”

“My family, I had told them briefly what’s going on. All of the sudden we’re starting with the lamp jokes,” Cannon said. “[The doctor] just put his head down and crossed his arms and shook his head. I think he was absolutely shocked. Most families would’ve been breaking out and wailing and screaming. We’re throwing jokes around the room.”

Shortly after Cannon was diagnosed with cancer over the summer, a GoFundMe page was set with a goal of $50,000 to defray the cost of medical bills and help with construction costs at Cannon’s home to alter his living arrangements. Less than a week later, the goal was met. There have now been more than 700 donations, totaling $92,500.

There was additional support Nov. 30 at Veterans Memorial Ice Skating Rink as more than 60 former players, some who played for the Hall High team as far back as the 1970s, laced up their skates to play in alumni games. The event was organized by former players Michael DiPietro and Chris Gambardella, co-captains on the Hall-Southington team last year.

“I’ve known him for a long time. I know what kind of guy he is. He’s a tough guy,” Gambardella said. “I knew one way or another he was going to pull through and he was going to make the best out of the situation.”

Cannon, a 1980 Hall High graduate, is also known for his wit. At the alumni event, a fishnet stocking leg lamp from “A Christmas Story” was on a table in a side room off the rink. At the base of the lamp was a Bauer skate, covering up the stiletto heel.

“We figured it would be a big hit,” Cannon said. 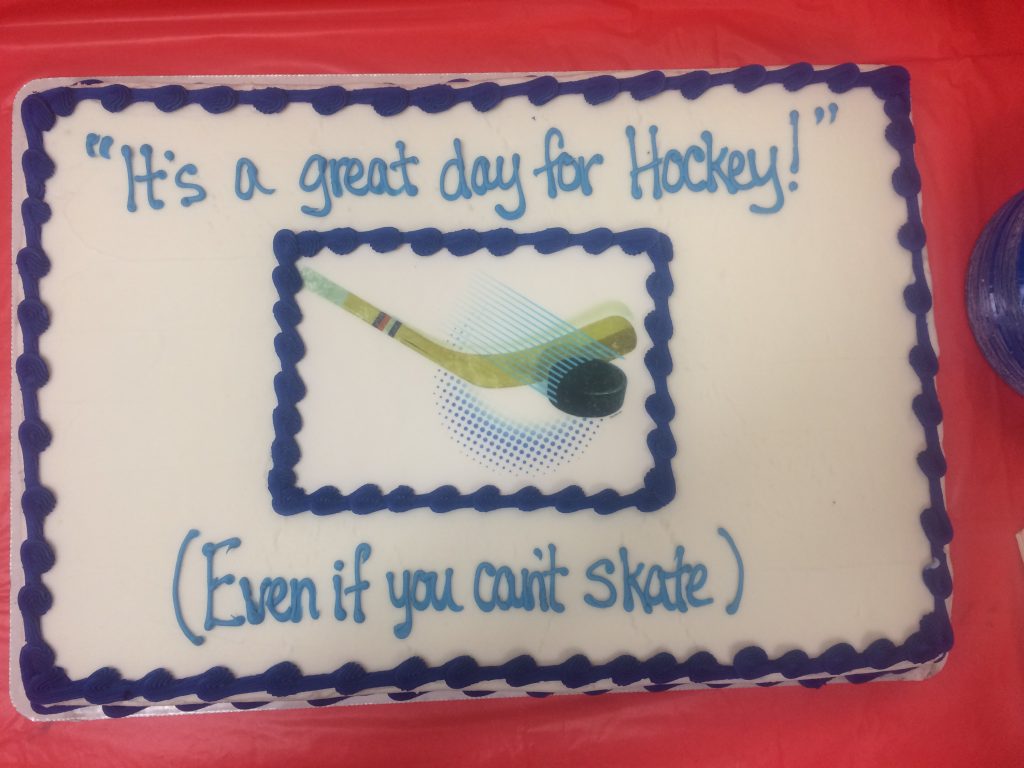 Next to the lamp was a large cake with the following words on it: It’s a great day for Hockey (Even if you can’t skate).

Even if he were to get a prosthetic leg, Cannon wouldn’t be able to skate. His vehicle was modified so he could drive. In early November he drove to Newington so he could watch DiPietro play on the club team at Westfield State University.

“His determination is unbelievable,” DiPietro said. “I can’t believe he’s still going to try and coach, but it’s a great thing. He’s an awesome coach for all the players. Hopefully he does it for many more years because he loves it.”

Cannon, who uses crutches, said he’s not ready to give up coaching. He thinks he can be an asset to the players.

“There are some things I can’t do, but I try to find a way to do most things. I do whatever I can. I’m a good problem solver. I’m very physically able. Even when I was in the hospital, when I was in the rehab, I’m looking at some people who have it worse than me. Who am I to cry? I’ve got no reason to be down.” 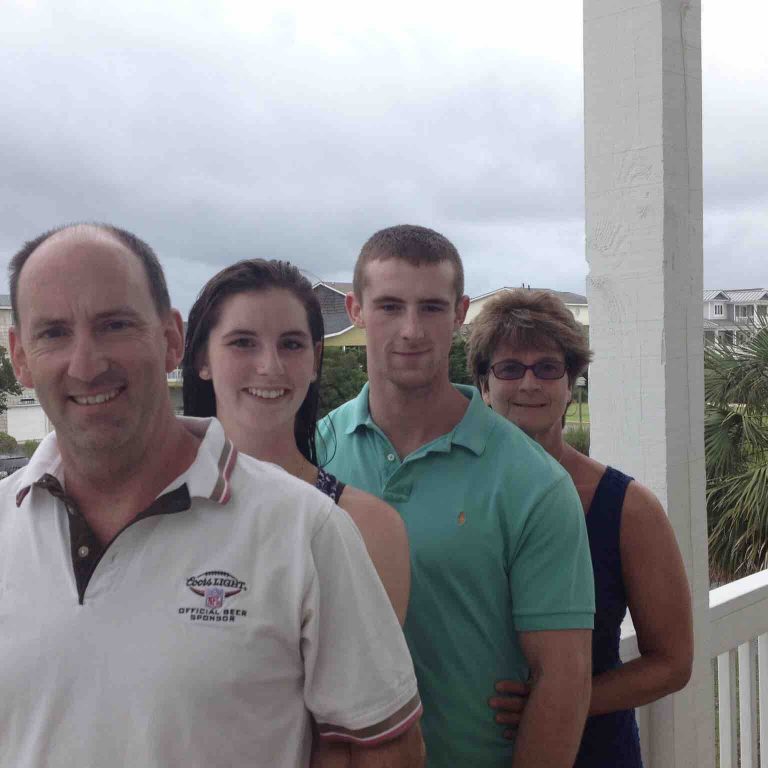 Brian Cannon (left), pictured with his family prior to his surgery. Courtesy photo (we-ha.com file photo)

“I’ve never shed one tear for me. Not one,” Cannon said. “But I’ve shed a few at the generosity and the support from people that have helped me out. It’s the absolute truth. I’m not one who would ever lay down anyway. But at the same time to be honest, I’m one who lives to please people. Just the support that everyone’s given me, any time I even start to have a weak thought, I just think I can’t let these people down. My family, the team, parents, friends, whatever, I can’t let them down. They’ve all backed me hugely and I can’t let them down.”

After a win over Northeastern Dec. 21, Cannon told We-Ha.com sports reporter Marlon Pitter that his players can use his experience as a means to fight through adversity later in life.

“We’ll see,” Cannon said. “I think that’s more of a long-term, life thing for them as opposed to a little thing inside the hockey season, but they’ve been very supportive of me, so it’s certainly been a rallying point. I think, later on in life, as they meet challenges, hopefully they’ll take that as ‘You can’t just sit there and pout. Do what you can do.’”

Two weeks into the season, Hall-Southington is 4-1-0 following an overtime win Monday night in Enfield against the Enfield-East Granby-Stafford Co-op, and the team is ranked second in Division III. They travel to Bolton on Saturday to face Northeastern.

Editor’s Note: A version of this story originally appeared in the January 2020 issue of West Hartford LIFE. The entire issue can be found online here.