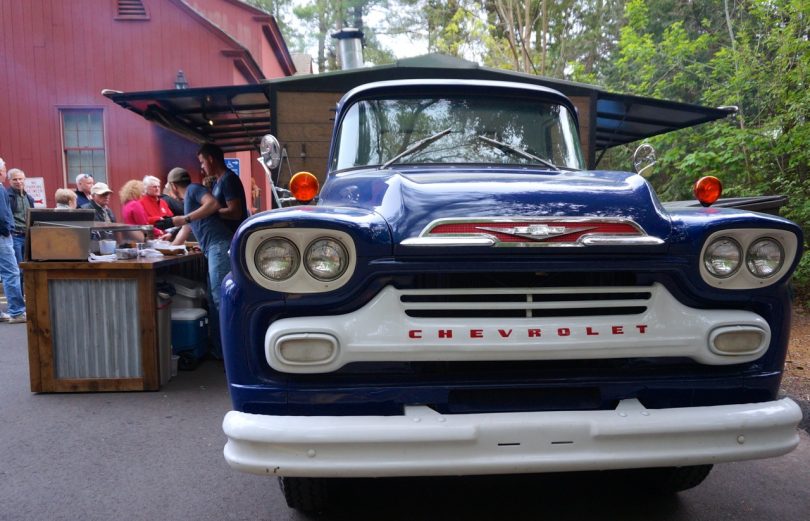 The Noah Webster House & West Hartford Historical Society will serve as the venue for a series of monthly food truck pop-ups that will be held from June through October.

Summertime and outdoor dining naturally go hand-in-hand, and plans have been put in place just in time for summer for a series of five monthly pop-up food truck nights co-hosted by Iron & Grain and the Noah Webster House & West Hartford Historical Society.

Tate Norden co-founded Iron & Grain with his cousin, Adam Belward, a veteran and former military dog handler who is a graduate of the Culinary Institute of America. Since they launched Iron & Grain in 2015, operating out of a repurposed 1959 Chevy Viking, the truck and its wood-fired oven and menu of fresh and locally sourced foods cooked over an open flame has been a fixture at farmers markets and events throughout the state.

The town’s new food truck ordinance, passed on March 28, paves the way for the food truck park to be a permitted use in West Hartford’s industrial zone, and while Norden had hoped to have Gastro Park operational by the fall of 2017 at 637 New Park Ave., he said Tuesday that due to a combination of factors the opening has likely been pushed back to the spring of 2018.

In the meantime, residents and visitors to town can get a small taste of the experience at the monthly pop-ups.

“The mini Gastro Park pop-ups will show West Hartford and the community a small bit of what they’ll find when Gastro Park opens,” Norden said. “At the same time it’s a great opportunity to raise money for the Noah Webster House & West Hartford Historical Society,” he said.

A portion of all proceeds will be donated to the local non-profit, which Norden admires for its innovate ideas and support of education.

Admission to the food truck pop-up events will be $10 per person, which will include a $5 voucher toward a food truck purchase. Food and beverages will be available for purchase.

Tickets are limited and available at www.noahwebster.yapsody.com. Alcohol is available to those 21 years or older, and a valid ID will be required. Children under 10 will be admitted at no charge.

“Noah’s Hands-on Discovery Center,” located inside the historic building, will be open for family use, according to the museum.

Iron & Grain is also available for bookings at both private and public events. Please visit www.irongrainco.com or call 860-840-2179 for additional information.