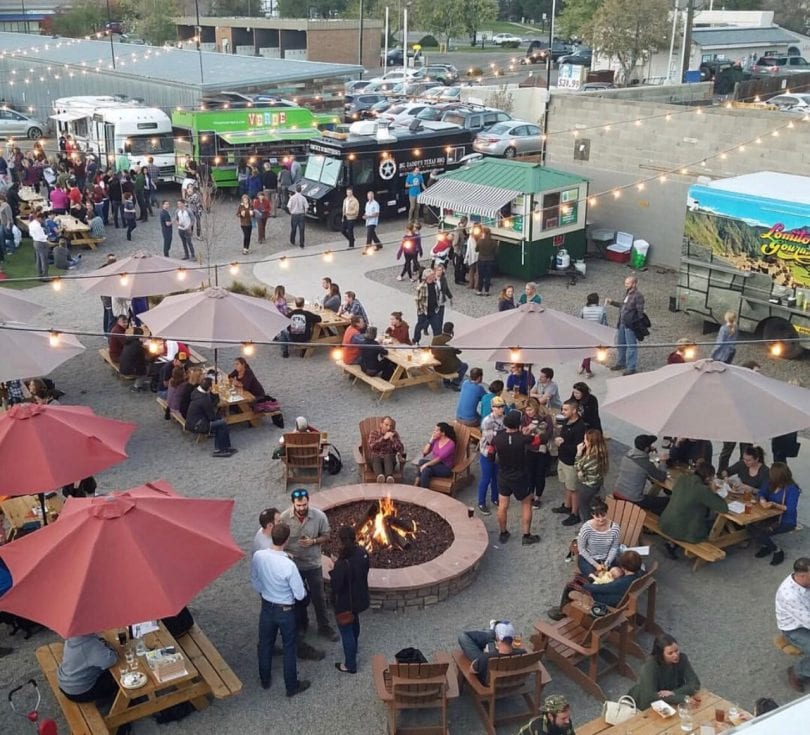 A similar concept to The Rayback, in Boulder, CO, is what Tate Norden has in mind for Gastro Park in West Hartford. Photo courtesy of Tate Norden

Tate Norden, co-owner of the Iron & Grain food truck, is finalizing details for Gastro Park and will be submitting plans to West Hartford’s Town Planning and Zoning Commission.

Iron & Grain food truck owner Tate Norden hopes to open the town’s first food truck park – Gastro Park – later this year, bringing a completely different experience to West Hartford with a space for the community to eat, drink, and interact in a fun and casual environment.

“I want to create a very aesthetically-pleasing space,” Norden said. The focus will be on local food and drink and local craftsmen, and will benefit local businesses. Gastro Park will echo the vibe already created by Iron & Grain, a retro and rustic look incorporating reclaimed materials, Norden said.

Long before the West Hartford Town Council passed the “food truck ordinance” on March 28, Norden had been working on the plans for Gastro Park. The concept has been his dream for years.

Norden, who with his cousin, chef Adam Belward, launched the Iron & Grain food truck concept in 2015, was the impetus behind West Hartford’s new ordinance. Iron & Grain has gained an enthusiastic following, but Norden approached the town last summer about a food truck ordinance because of his limited ability to do business where he lives. 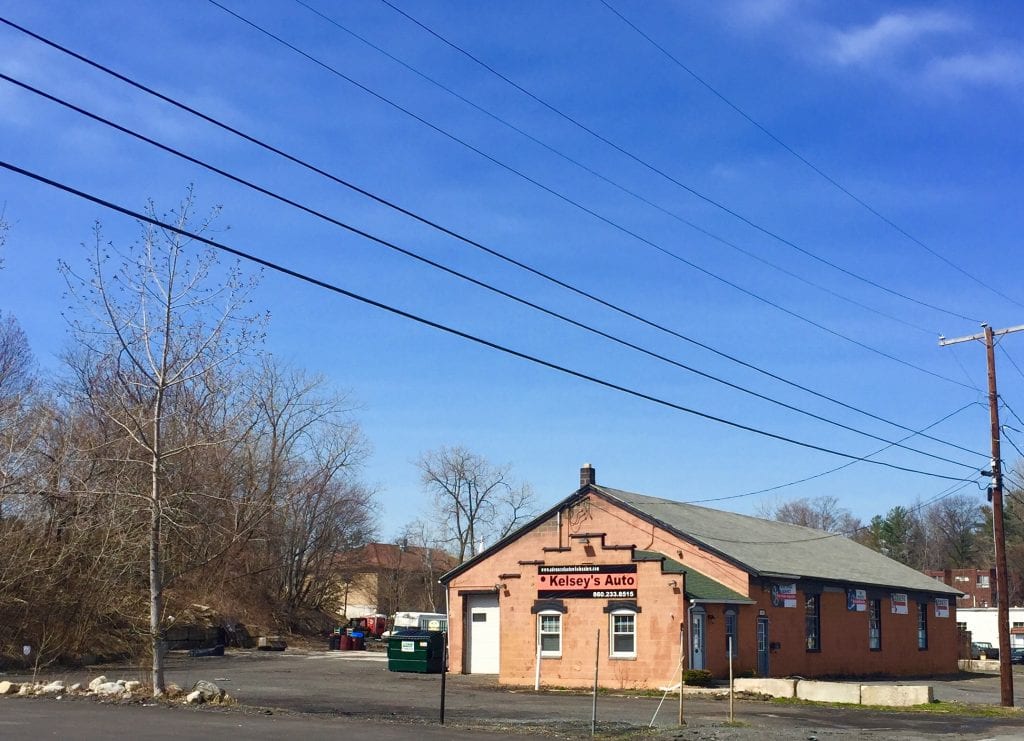 Gastro Park will be proposed for 637 New Park Ave. in West Hartford, and the existing garage building will serve as a commissary, storage for food truck vehicles, and will have an addition that will include restrooms and a bar. Photo credit: Ronni Newton

Norden, working with a team of investors, is already in the process of purchasing a piece of property – slightly under an acre of land now occupied by Kelsey’s Auto Sales at 637 New Park Ave., behind BodyRoc and across the street from the Elmwood CTfastrak station. It’s one of very few parcels of land in West Hartford that would be able to meet the ordinance’s criteria for food truck parks because of its distance from other restaurants and residences.

Gastro Park, which will be able to accommodate approximately 300 patrons, will become a “local foodie celebration,” Norden said, but much more than just a place where up to five food trucks can park and sell food.

“I’ve talked to a lot of food truck operators to gauge their interest and get their buy-in,” Norden said. Like a field of dreams, the response he’s gotten is: “If you build it we will come.”

Mercado, Chief Brody’s Banh Mi, Yardbird, and Caseus are just some of the food trucks that Norden said have expressed interest.

“This is being driven by a need. There are more and more really well-run food trucks, but Connecticut has less spaces where they can park,” he said. Weekends, when local breweries are open and there are private parties, tend to be busy for the operators but weekdays can be slow.

Gastro Park will be open six days a week, from 11:30 a.m.-11 p.m. It will be open year round, although April through October is the anticipated peak season and Norden said hours will be shortened from January through March.

The open air dining area will include a variety of tables, many with umbrellas. Although most of the seating will be outdoors, Norden said a covered seating area can be climate-controlled.

Gastro Park will be about food, but it will also be about being active and socializing.

“It’s not just about sitting at a table. I want to create a space in town that encourages people to mingle,” Norden said. People tend to chat with others as they wait in line at food trucks. They speak to the operators, to other diners, encourage each other to try new things.

A portion of Gastro Park will be set aside for yard games. Norden envisions lively cornhole, bocce ball, and giant Jenga tournaments. Sand volleyball may even be added in the future.

The existing garage on the property will not be demolished, but rather will be repurposed as a storage facility for Iron & Grain’s 1959 Chevy Viking as well as up to four other food trucks that will rent space to store their vehicles. It will also become a commissary, providing much-needed commercial kitchen storage and food prep space availability for local food trucks. The facility will be able to accept bulk delivery, saving money for food truck owners who otherwise need to order small batches of ingredients.

An addition to the existing structure will be a permanent handicapped-accessible restroom facility, which is required by West Hartford’s food truck ordinance.

The addition will also accommodate a climate-controlled indoor bar area, which Norden said will be able to be open to the air when weather permits. He has already lined up an operator for the bar. Plans are for 20 draft lines offering a variety of beers – many of which will be local – as well as draft cocktails. “Draft cocktails are up and coming everywhere but on the east coast,” Norden said, and he plans to change that.

The bar will only be open when food trucks are on site also selling food, and Norden is adamant that Gastro Park will not attract a “bar scene.”

The targeted demographic will be millennials, young business professionals, and families. It will be family-friendly, open to people of all ages, and also dog-friendly.

“People can come and hang out for a few hours, bring their dogs. Adam [Belward] and I are huge dog lovers, and we think dogs are an extension of the family,” Norden said. Belward, he said, was a dog handler in the military before attending culinary school.

Norden said there will also be a permanent booth that chefs or restaurateurs who don’t have a food truck can rent. “They can rent it and run a pop-up crepe stand, a taco stand, bring food to clients and prove out a concept.”

There will also be a small, manageable herb garden that chefs can use in their own culinary creations.

There will be free onsite parking, and Gastro Park will also benefit from being across the street from the CTfastrak station and at the end of Trout Brook Trail. People will be able to ride their bikes, run, or walk to the site.

The entire property will be fenced in and landscaped, and will feel like its own space. “Really fun, but open and intimate at the same time. It will be a sanctuary in the midst of a heavily built-out area,” Norden said.

“It’s been really encouraging all of the feedback we’ve gotten. People are really engaged with food trucks, the quality, creative cuisine,” Norden said. There’s a need for more venues for people to enjoy that experience.

“This is about a local celebration of food,” Norden said. He’s also confident that it will enhance the Elmwood and New Park Avenue area and help it grow and prosper.

Norden said Gastro Park will not only support the neighborhood and food trucks that use the space, but also other entrepreneurs including local farms. “We’re essentially creating a small business ecosystem. They can use us to grow and sustain their own small business,” Norden said.

“I fully expect people to see Gastro Park, and for other chefs to dip into the food truck game.” With food trucks, he said, there’s a real sense of community rather than competition, he said. “We have more success when we work together and that will carry over to Gastro Park.”

Norden has a marketing background, and said that in a previous job working for Nestlé Purina he was traveling around the country pitching the idea of a dog-oriented food truck. “I saw the impressive food truck culture and cuisine,” Norden said, and that spurred him to start Iron & Grain. 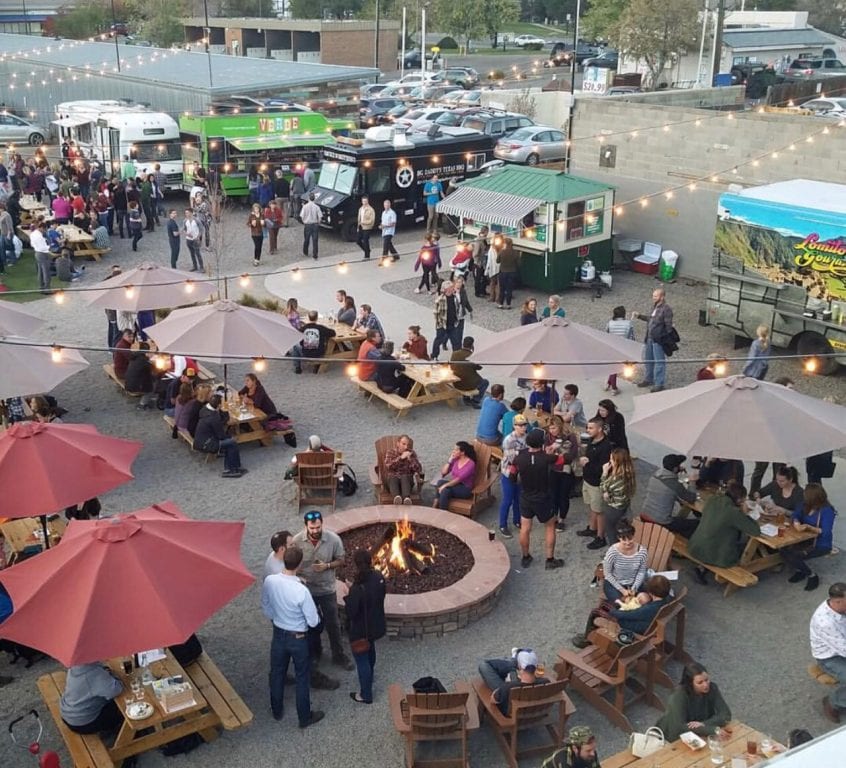 A similar concept to The Rayback, in Boulder, CO, is what Tate Norden has in mind for Gastro Park in West Hartford. Photo courtesy of Tate Norden

He’s visited food truck parks in other cities, and has particularly been impressed with The Rayback in Boulder. He and Belward have gotten some insight from the owners of that venue as the plans for Gastro Park come together.

Norden provided an image of The Rayback as an example, but said he is working with architect Linda Howley and she will have renderings available shortly.

Norden hopes to submit plans to TPZ next month, and if all goes as planned to open Gastro Park in September.

West Hartford is already a food hub, with great restaurants and chefs, and Norden is hoping to also make it a hub for mobile food vendors – which now provide really great food by small local businesses, often at lower cost than restaurants, and have long lost the stigma of serving greasy and low-quality fare.

Norden doesn’t think Gastro Park will “cannibalize the local restaurants.” On the contrary, he said, “I think this will bring more people to the area.”

“I want to help West Hartford become a front-runner, a pathfinder for the food truck scene in Connecticut.” The concept has been very successful elsewhere in the country. “We’re not reinventing the wheel,” Norden said.

Watch for Gastro Park’s website, www.thegastropark.com, to be live soon.