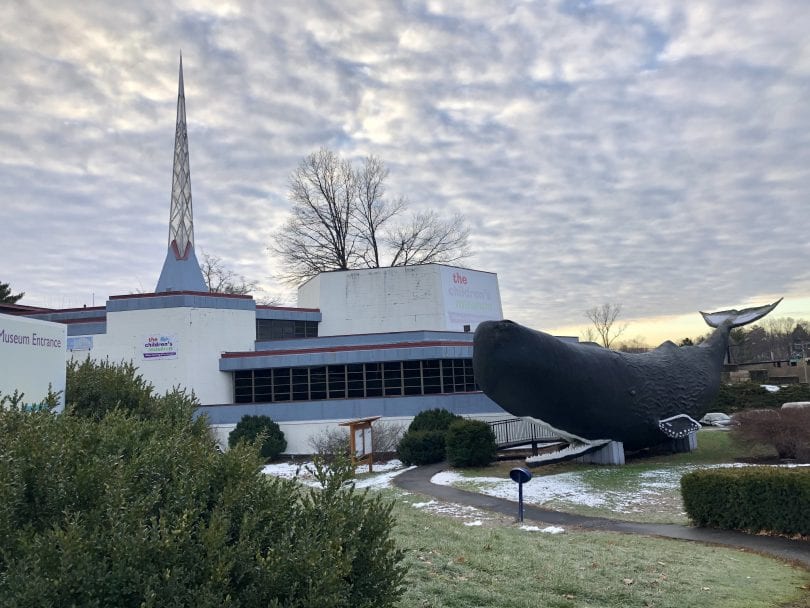 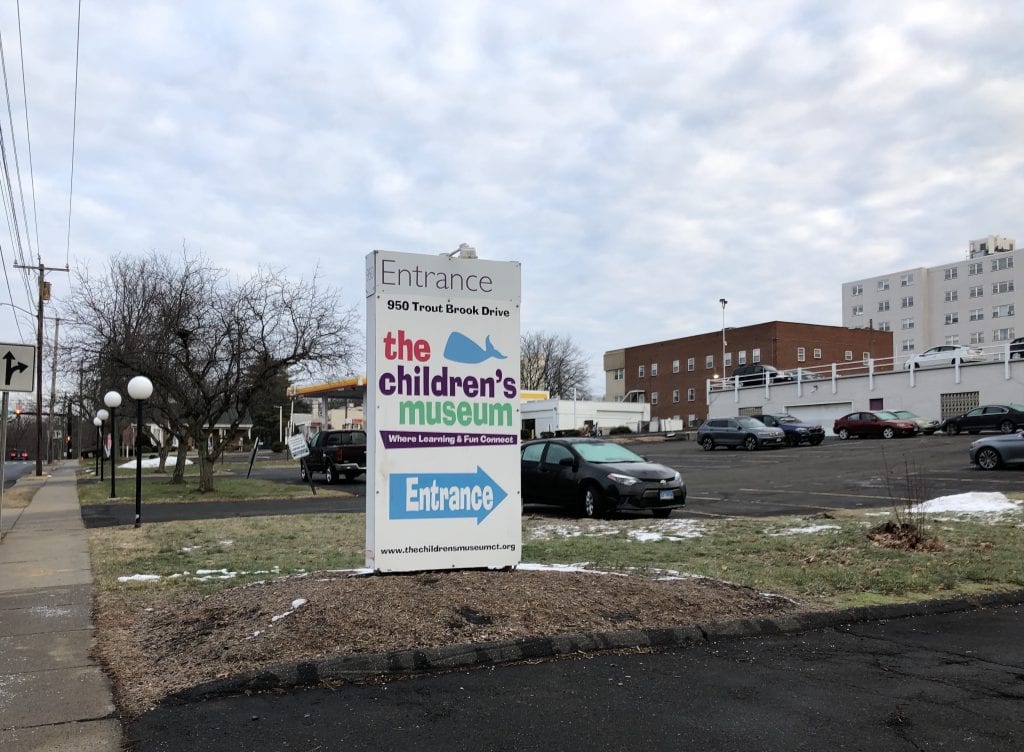 Located at 950 Trout Brook Drive, the Children’s Museum occupies a strategic parcel that borders residential and commercial zones within walking distance of the Center and Blue Back Square. Photo credit: Ronni Newton

The Children’s Museum remained in its longtime West Hartford home after selling the property to neighboring Kingswood Oxford nearly two decades ago, but the institution and its iconic Conny the whale sculpture will likely be departing soon now that the private school has put the strategically-located parcel on the market effective Jan 6.

The Museum sold the 950 Trout Brook Drive property, which has been its home since 1958, to KO in 2003, and since then has been leasing it back. Both organizations knew the arrangement would end eventually; the current lease expired several years ago, and the Museum has been talking about moving for at least the past seven or eight years.

The Children’s Museum had expressed a desire to move to the former UConn campus when the University announced its plans to relocate, and had even prepared renderings of several possible designs. Although that plan did not materialize, in 2019 they identified two other possible locations. Over the past year the Museum focused on the former Hartford College for Women property on Asylum Avenue across from the Connecticut Historical Society in the West End of Hartford – although now that the University of Hartford would like to sell the entire property as one unit they will need to find a partner.

Kingswood Oxford Head of School Tom Dillow announced Tuesday that after much consideration, school leadership has decided to sell the property. Colliers International of Hartford, a leading commercial real estate brokerage and investment management company, has been selected to handle the the process, and John Cafasso, principal with Colliers, said it will officially go on the market Wednesday.

“In the spring of 2019, Kingswood Oxford School (KO) kicked off an ambitious strategic visioning process to chart the school’s future,” Dillow said in a statement. “This process coincided with the announcement from the Children’s Museum that it was making plans to move to a new location from its current spot on a 3.4-acre parcel of property owned by the school on the north edge of our campus, at 950 Trout Brook Drive.”

KO plans to use the proceeds from the sale as a resource to support that vision.

“After a thorough planning process, we have decided that the best use of this property is to invest the proceeds from its sale to advance our strategic goals, enabling us to support faculty and staff professional growth, bolster student financial aid resources, plan for new campus facilities and expand academic and experiential programming,” Dillow said. 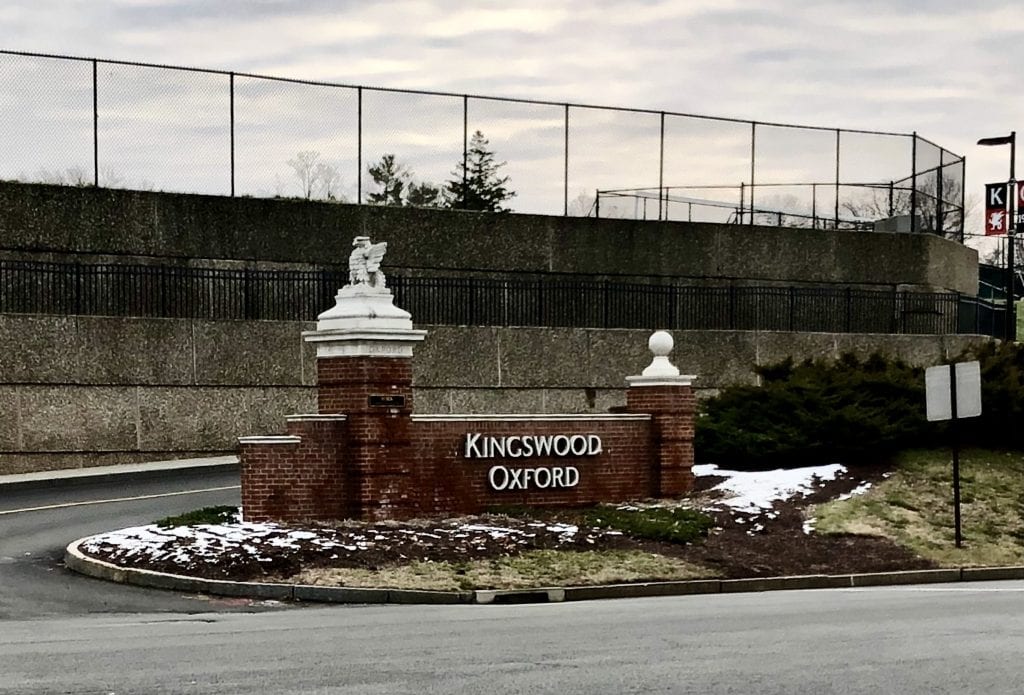 “We have enjoyed decades of great success at our current location and are thankful for the support from both Kingswood-Oxford (KO) and the Town of  West Hartford,” Michael Werle, executive director of the Children’s Museum, said in an email to We-Ha.com. “The decision by KO to sell this parcel is understandable and The Children’s Museum will do everything it can to assist KO in the sale process. KO has been a very helpful and understanding landlord and we owe it to them to continue being cooperative in this endeavor.”

Plans for the sale of the property were shared with the KO community and stakeholders in an emailed letter dated Jan. 5, 2021, signed by Dillow and Board of Trustees Chair I. Bradley Hoffman. A letter indicating the plans has also been mailed to neighbors, particularly residents of Outlook Avenue which abuts the eastern edge of the campus.

In their letter, Dillow and Hoffman noted that the sale of the property will not only help the school, but developing the parcel will likely benefit the Town of West Hartford, helping it remain a “vibrant, attractive community.” They said that several board members have discussed their vision for the future of the parcel with town officials.

“This sale is strategically very important to KO – especially with the pressures of the current pandemic on education and the economy,” West Hartford Mayor Shari Cantor told We-Ha.com.

Cantor said she believes the “highly desirable and unique parcel” is the largest contiguous piece of property located within walking distance of the Center and Blue Back Square. “This could be an important addition to this long-time thriving area, and we’ve already heard that there’s a high level of interest. We’re looking forward to learning about potential new investors,” she said.

The 950 Trout Brook Drive property is currently zoned for multi-family residential (RM-2), and borders both commercial and residential zones. Cantor noted the potential of creative opportunity for a mixed-use development.

Cafasso said Wednesday morning that Colliers’ Hartford Investment Team is pleased to announce the listing of the 950 Trout Brook Drive property. “This site provides an investor or developer tremendous opportunity to reposition the property in the future. It’s in a fantastic location and we look forward to working with Kingswood Oxford on the disposition.”

The sales flyer for the property, released Wednesday morning and included as a PDF below, notes that the parcel could accommodate “74 units of market rate luxury apartments,” with the potential for “medical, office, or retail” use as well.

The departure of the Children’s Museum – and Conny the whale – will alter a portion of the town’s landscape that has existed for decades.

“The Children’s Museum has been our neighbor and tenant for nearly two decades, we enjoy a positive, mutually supportive relationship, and we wish them well,” Dillow and Hoffman said in the letter.

“The Children’s Museum has been a long-established and cherished member of our community,” Cantor said. “We look forward to hearing about their future plans.”

West Hartford Town Manager Matt Hart also noted the impact the Museum has had – not just on the town but the region. “I want to acknowledge the Children’s Museum for their long history in our community, and their great service to children and families, not just in West Hartford. I am excited about their future in the West End.”

Werle said that the Children’s Museum “has been privileged to provide unique hands-on learning opportunities to the children and families of Connecticut for the past 93 years – and plans to continue doing so into the foreseeable future.” He said that in a “normal year,” the Museum serves between 130,000-170,000 individuals representing more than 250 schools, libraries, and community centers throughout the state as well as in New York, Massachusetts, and Rhode Island.

“Through an aggressive grant seeking effort, we are also able to bring these programs to the underserved children and families of Connecticut’s urban areas at no cost to the participating families and children,” he added.

KO’s decision to sell the property will spur the Museum to expedite its relocation options, Werle said.

“We have secured the endorsement of the Hartford City Council for a move back into Hartford where we originated in 1927. We are excited about this potential and will be analyzing these options over the next few months as we are currently working with private and public entities to identify, assess, and secure a new home site for our preschool, museum, and Center for STEAM Advancement – including Conny the whale, our wildlife sanctuary, the planetarium, and all our engaging hands-on exhibits for children 3 to 13,” said Werle.

Conny was built piece-by-piece in the mid-1970s, and plastered over with cement, Werle said. He has no idea how much the sculpture weighs, but said when the move takes place, he “envisions Conny on a flat-bed, and in a parade.” 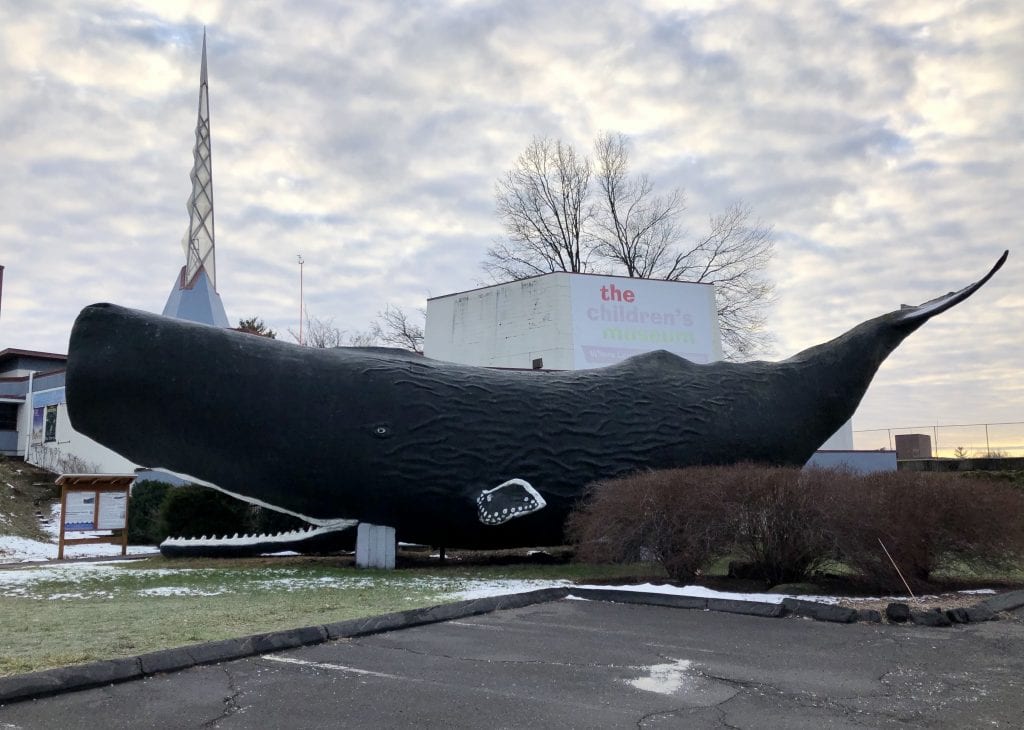 Conny the whale, the iconic sculpture at the Children’s Museum, was built piece-by-piece by the community in the mid-1970s. Photo credit: Ronni Newton

The overall goal for the new facility, Werle said, will be “to create a very inclusive environment that creates life-long learners amongst all of Connecticut’s youth. In addition, given the increased need for sustainable development our new home will be geared to being a Flagship Green/Net-Zero-Energy-Use facility with the assistance of Eversource Corp and others. It will be the first such public space in Connecticut and will serve as a training center for others to learn from and emulate.”

Werle said Wednesday that in addition to looking for a partner with which to purchase the former Hartford College for Women property, which totals about 10 acres, the Museum is looking at other sites in the City of Hartford.

“We had carved out about 4.5 acres of that,” Werle said of the Hartford College for Women site. “That was our original letter of intent but then they wanted to put the whole property up. We’ve been actively talking to developers about purchase and then would subdivide.”

Like the Children’s Museum, Kingswood Oxford is also a long-standing fixture in the community, Hart said, and noted that the sale of the parcel will provide important financial support for the school. He is very much looking forward to seeing what types of proposals will be made to redevelop the property.

“We look forward to assisting with redevelopment that will do great things for the town and the school as well,” Hart said.

“We believe this sale will be good for West Hartford and our neighbors, good for the Museum and good for Kingswood Oxford – as it will enable us to empower the future for KO, our students and our community,” said Dillow.

Werle said Wednesday that the Museum intends to remain open, and if they have to move before a permanent site is found, they’ll relocate to temporary space. “We’ll find a temporary home – we don’t intend to close,” he said.

The property will likely sell in a reasonably short timeframe, Werle said, but the process of preparing to develop it may take some time and allow them to remain in place. “We’re willing to work out with potential buyers what needs to be done,” Werle said.

Any move, even to temporary space, would include the entire institution because everything is tied together for their mission, Werle said. “We would try to keep everything intact,” he said, and while the planetarium could not be relocated temporarily, they have a portable planetarium and other devices that could be used to keep that element in place.

Werle said he estimates there are 5 to 6 million alumni who have engaged in Children’s Museum programs in the nearly hundred years since its founding. It’s been a special type of place, he said. “We will try hard to preserve that.”