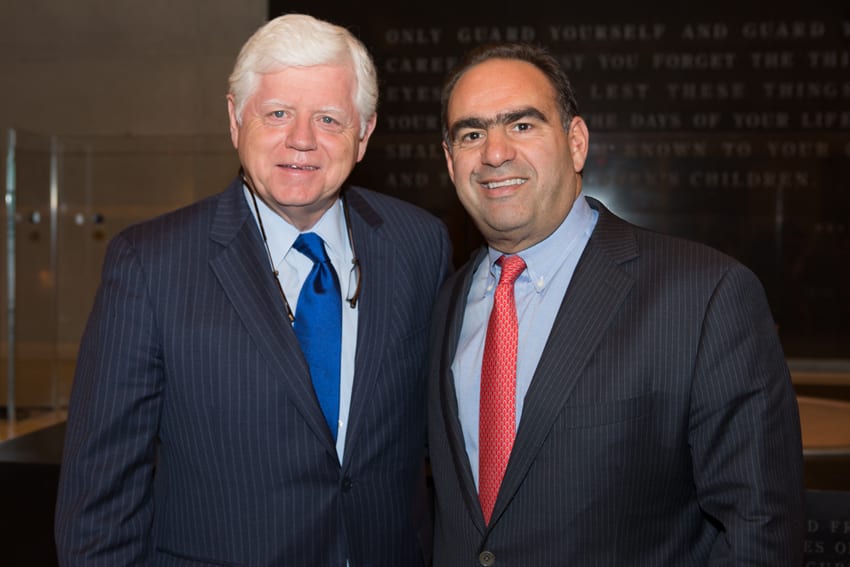 In appointing LAZ Parking Chairman and CEO Alan Lazowski to serve on the United States Holocaust Memorial Council, Pres. Barack Obama called him a ‘generous and tireless champion of human dignity and rights.’ 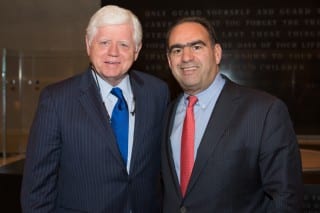 Hartford resident Alan B. Lazowski, chairman and CEO of LAZ Parking, has been sworn in as a member of the United States Holocaust Memorial Council.

The Council leads the nation in commemorating the Holocaust, and consists of 55 members appointed by the president, as well as five members each from the Senate and House of Representatives and three ex-officio members from the Departments of Education, Interior, and State.

“Alan Lazowski is a generous and tireless champion of human dignity and rights – and an advocate for religious freedom. He has an unwavering commitment to remembering the Holocaust as a horrific world tragedy. His selection for this profoundly significant new role honors his lifetime service to our community, and his family’s huge, historic contribution. I am honored and proud to be his friend,” said United States Senator Richard Blumenthal.

Lazowski is the Founding Chairman of Voices of Hope, an organization created by descendants of Holocaust survivors to collect, categorize and share the experiences of Holocaust survivors for the benefit of future generations. The goal is to maintain historical accuracy of the Holocaust, to teach subsequent generations about the evils of prejudice and intolerance, and to foster a culture of courage against hate, bigotry and inhumanity.

“The appointment of Alan Lazowski to the Holocaust Memorial Council is fitting for an individual widely known for his passion, intelligence, and unwavering support of using history as a means to educate and enlighten future generations. The son of Holocaust survivors, Alan and his family’s story is one that truly exemplifies courage, triumph, and perseverance over evil. Following his father’s example, Alan continues to be a staunch defender of human rights. Alan’sappointment will continue to enhance the legacy of the Memorial Council who will benefit from his expertise and life experience. I applaud President Obama for this outstanding selection of a dear friend and know the great honor that Alan will bring to the Council and to the nation,” said United States Congressman John B. Larson.

Lazowski serves as a member of the National Executive Committee of the Anti-Defamation League and on the Board of Directors of the Greater Hartford Jewish Federation and the Hebrew Home and Hospital and Chairman of Chabad of Greater Hartford.

“As a child of Holocaust survivors, I am deeply committed to keeping the memories of the Holocaust victims alive and to inspire people to stand up against hate, intolerance and genocide of any kind.” Stated Alan B. Lazowski, chairman and CEO of LAZ Parking. “With fewer and fewer survivors and eyewitnesses alive, I feel that it is so important to ensure that their stories will continue to be told for generations to come. The United States Holocaust Museum is a place that teaches the world that history matters. We cannot fully understand or address the present without an understanding of the past. The United States Holocaust Museum also reminds us of the consequences of action – and inaction. The museum teaches millions of people each year about the need to prevent genocide and the museum inspires people to act so that we can all respond to the monumental challenges that confront our world. It is my great honor to be a part of this most important
institution.”

Philip Lazowski, Alan’s father, narrowly escaped death in Nazi-occupied Poland as a young man. Born in 1930 near Vilna in Bielitza, Poland (now Belarus), he survived the Holocaust by hiding for almost three years in the Lithuanian forests. After World War II, Philip Lazowski immigrated to America at age 17, learned English, pursued his education and ultimately became a prominent rabbi for three decades at Beth Hillel Synagogue in Bloomfield, CT, where Alan grew up.

Rabbi Lazowski’s wife, Ruth, is the daughter of a woman who helped save Philip’s life when he was separated from his family and was rounded up by the Nazis, providing him the opportunity to go into hiding to evade capture. Well-known in the Greater Hartford Jewish community as a spiritual leader for 59 years, Rabbi Lazowski retired in 2000, but continues to serve as Rabbi Emeritus at both Beth Hillel Synagogue in Bloomfield and Emanuel Synagogue in West Hartford, and as Chaplain to the Connecticut State Senate, Hartford Hospital, and the Hartford Police Department.

Rabbi Lazowski has authored eleven books, including his most recent publication, “Why a Rabbi.” His book “Faith and Destiny,” published in 2006, is described as “the autobiography of a little boy whose faith and sheer will to survive carried him through years of fear, tragedy and horror in Nazi occupied Poland.” It became the basis for a documentary short film.

In 1981, Alan Lazowski founded LAZ Parking in Hartford with his two childhood best friends. The company grew from one single valet location in downtown Hartford. Today, LAZ is the third largest parking company in the nation, employing over 8,000 people in 26 states and 245 cities.

Alan Lazowski’s professional awards include the Thomas and Bette Wolff Family Entrepreneurship Award from the University of Connecticut, the NAACP Civil Rights Award, the Anti-Defamation League’s Torch of Liberty Award, the Junior Achievement Business Hall of Fame Award and the Lifetime Achievement Award from the Hartford Business Journal. He serves on the Board of Directors of the National Parking Association, the Green Parking Council, Hartford Economic Development Corporation (HEDCO), The Jordan Matthew Porco Memorial Foundation, and the Goodwin College Foundation.

The U.S. Holocaust Memorial Council is the governing board of trustees of the United States Holocaust Memorial Museum in Washington, D.C., an independent facility operating as a public-private partnership. The Council meets twice annually, and was established by Congress in 1980. Presidential appointments serve for a five-year term; 11 members’
terms expire each year. Lazowski is the only Connecticut resident on the Council.