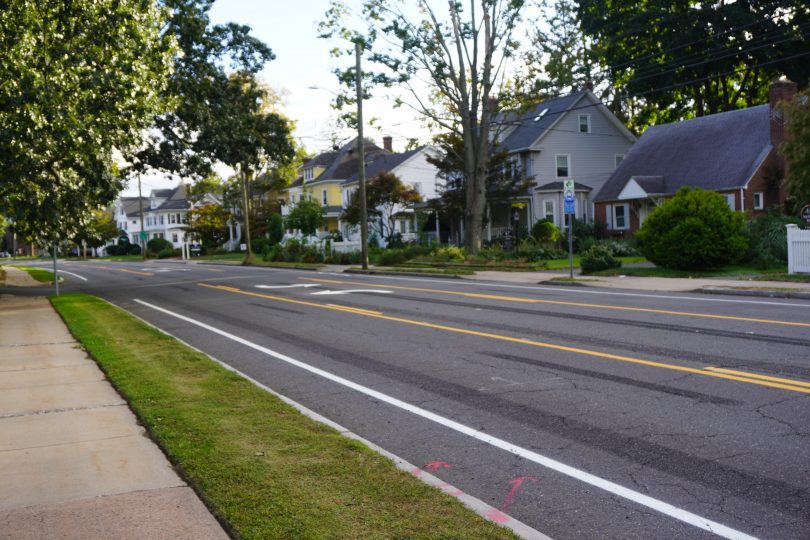 The North Main Street road diet, which changes the configuration to one lane in each direction with a left turn lane in the center, will become permanent. Photo credit: Ronni Newton (we-ha.com file photo)

The Town of West Hartford has released the results of a survey taken late last year regarding the road diet trial underway on North Main Street.

Two-thirds of the respondents to a survey about West Hartford’s North Main Street road diet trial support making the change in the traffic flow permanent, and roughly 60% think the roadway feels safer and is more functional.

A stretch of North Main Street between Loomis Drive and Bishops Corner was restriped in August 2021, and the road diet trial has been underway since then. In November, the town solicited public feedback regarding all aspects of the trial through a survey, to which 1,914 people responded.

A summary of the results, which were released this week, can be found below as well as on the project webpage.

“From the public’s standpoint, we are hearing they feel more comfortable,” Assistant Town Engineer Greg Sommer told We-Ha.com. That feeling was shared not only by drivers, but also pedestrians and bicyclists, he said. About 60% of the people who responded to the survey live on one of the roadways that is being studied as part of the trial.

Information about the number of vehicle crashes that have taken place since the road diet trial began was not available, but Sommer said police have said crashes that have occurred in the area have been less severe, with fewer vehicles being side-swiped and most incidents being rear end collisions. There have also been fewer crashes at the intersection of North Main Street and Asylum Avenue, he said.

Consulting firm Vanasse Hangen Brustlin, Inc. (VHB) has been engaged by the town to assist with the project and will continue to monitor traffic and collect data, looking at the impact on traffic other north-south routes and other roadways in town, crash frequency and severity, pedestrian and bicycle usage and safety, and traffic speed and queues.

Individuals taking the survey were also given the opportunity to comment, and Sommer said two topics stood out.

Traffic signal operation was one issue brought up, and he said the town and VHB will be working to implement timing changes in the signals to improve traffic flow and reduce delays.

Improper usage of the Two Way Left Turn Lane (TWLTL) was also mentioned by respondents, and Sommer said because shared center turn lanes are somewhat new to this area, drivers often have a learning curve. An information sheet has been created by the town’s Engineering Division (also provided below as a PDF) and provides some advice for the proper use of a TWLTL system. 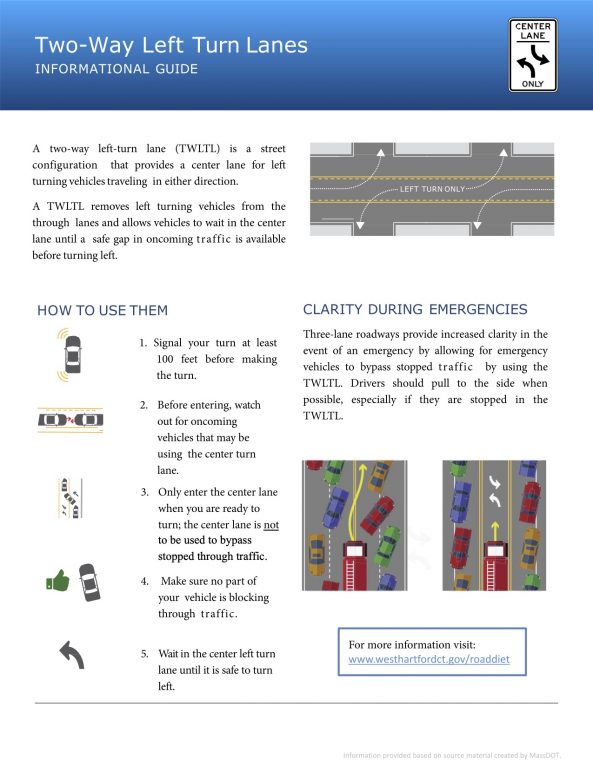 The trial will continue through the end of the winter, and a public informational meeting will take place at a date to be announced in early spring. Following that, VHB will prepare a report and make recommendations to the town, Sommer said.

“We will be looking at the impacts on safety, travel time, and public feedback,” he said.

Options may include keeping the road diet as is, maintaining a road diet but implementing additional changes which may include altering other impacted intersections, or returning to the former roadway configuration.

The recommendations will be presented to the Town Council and the final decision will be made by the town manager who serves as the town’s Legal Traffic Authority.

Following the end of the trial, and while the recommendations are being considered, the current configuration will remain in place to avoid additional confusion to the public, Sommer said.