[Updated, 7:10 p.m.] West Hartford Mayor Shari Cantor and Town Manager Ron Van Winkle are in disbelief about the impact on West Hartford of the budget presented to the legislature Wednesday by Gov. Dannel P. Malloy. 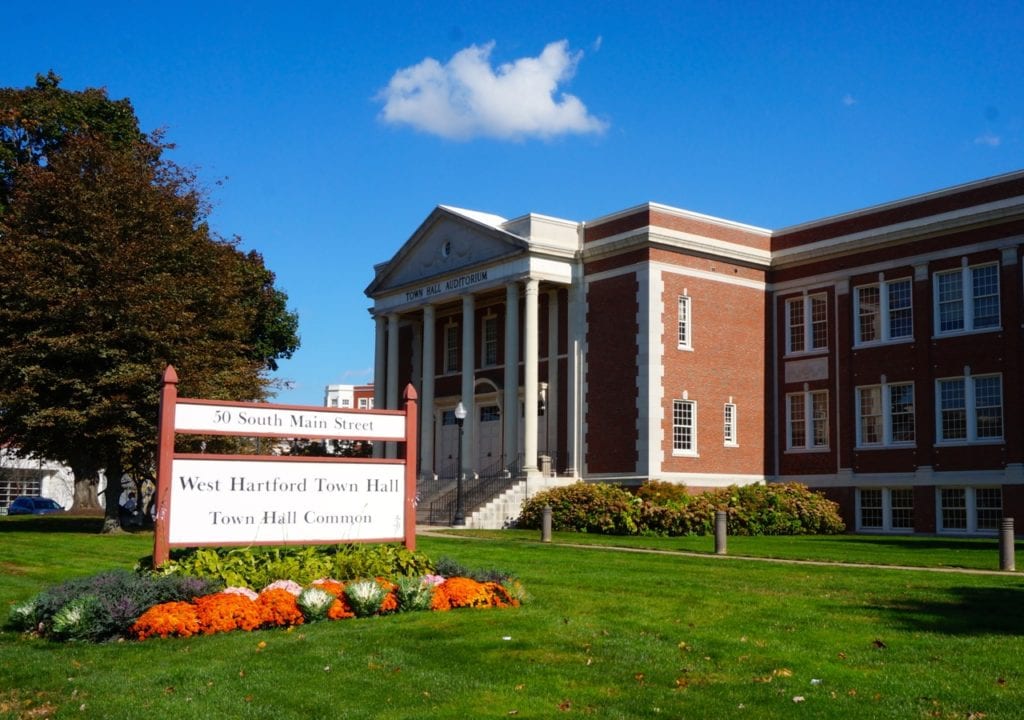 Neither West Hartford Mayor Shari Cantor nor West Hartford Town Manager Ron Van Winkle attempted to conceal their fury when speaking about the impact on the town of the $18 billion budget presented by Connecticut Gov. Dannel P. Malloy to the state legislature on Wednesday.

According to Van Winkle, the actual impact of cuts in state aid to West Hartford is nearly $15 million for FY2018, which begins on July 1, 2017. Statewide spending reductions total approximately $1.3 billion.

“Some other municipalities are worse off, but we feel like we’ve been targeted,” Cantor said. “It’s going to be more than just a huge tax increase.”

Cantor said that Superintendent Tom Moore told her that a $1 million cut equates to 16 teachers.

Van Winkle said that the nearly $15 million decrease in aid – much of which comes from a retooling of the formula for Educational Cost Sharing (ECS) grants – is just part of the budget challenge. Adding in the $2.3 extra needed by the MDC, and other expected cost increases and revenue decreases, and the town is looking at a potential $25 million shortfall.

“This is crazy. We have never seen an impact like this in history,” Van Winkle said.

“The governor’s proposal targets West Hartford in a way that is unfathomable,” Bye said.

Cantor said that there is no way that West Hartford should be expected to face an aid cut of this magnitude without some other source of revenue. Property taxes can’t be increased enough to help the town stay safe and educate our children, she said.

Both Van Winkle and Cantor said that West Hartford has already made all of the changes it can to streamline administrative costs, combining town and education functions whenever possible. Collective bargaining agreements have resulted in more favorable pension plans and employees are now on High Deductible Health Plans to cut the town’s employment-related costs.

“We’re being penalized for being successful. We’ve done all the right things. We are committed to Hartford – but not at the expense of our own demise,” Cantor said. “I’m furious. I feel like I’ve been punched in the gut.”

“This town is well-run, well-managed, and we’re being clobbered by this decision.”

Van Winkle and Cantor said they are continuing to crunch the data, but noted that that other towns are receiving twice or nearly three times the ECS funding per pupil in comparison to West Hartford.

“It makes no sense except that we already have a great school system and we’re being penalized,” Van Winkle said.

“We are a community that serves children in poverty and children with special needs,” said Bye. “We have over 70 languages in our schools and 2,000 of our students are living in poverty. And still we are proud to consistently have two of the top high schools in Connecticut,” said Bye.

West Hartford has proven that students at all income levels can and do thrive in a “high quality integrated school district,” and the proposed cuts threaten that success, Bye said.

“Poverty has grown five times faster in the suburbs over the last decade and our school funding formula must recognize that reality,” said Bye.

The governor’s budget gives a high level of support to “alliance” school districts. “We understand that there is a significant difference in need but there is a breaking point, and we are far beyond,” said Cantor. “We’re being penalized beyond any reasonable measure and we don’t understand why.”

Cantor said she has already spoken to the town’s legislative delegation, and they say this isn’t going to stand, but there is not likely to be any legislative approval of the budget before West Hartford votes on its own budget.

West Hartford already has a mill rate that is in the top 30 in the state. The town has a strong Grand List, but nothing like that of the gold coast towns, Cantor said.

Bye said that she, and the rest of the town’s delegation, have pledged to fight to change the governor’s “misguided budget.”

State Rep. Derek Slap (D-19th), who was elected to his first term in November, equated the level of proposed state aid cut to the equivalent of eliminating the entire West Hartford Police Department. “The budget proposal simply doesn’t work for families in West Hartford,” he said.

“I have to submit my budget in 30 days and I don’t know what to say to my staff,” said Van Winkle. “I’ve been doing this for a lot of years and I have no idea how to create a budget.”

Cantor said she and Van Winkle will regroup on Thursday and begin to figure out what to do, how to educate the public, what the options are. They will also go over the numbers again and again. But right now she is just trying to understand how the state could do something like this to West Hartford.

“You just can’t gut a community – in 30 days – that has been so successful,” said Cantor.

Bye said that Malloy is out of touch with challenges that middle class residents in the state face with municipalities’ property tax-based budgets.

“This budget passes the state’s budget problems onto the middle class homeowners in Connecticut. It is the wrong direction for Connecticut and for our communities,” said Bye.

The viability of Hartford is critical, Cantor said, but West Hartford has been an anchor to the region and this is punishing us. “You can’t destroy the neighbor. This is beyond inequality.”