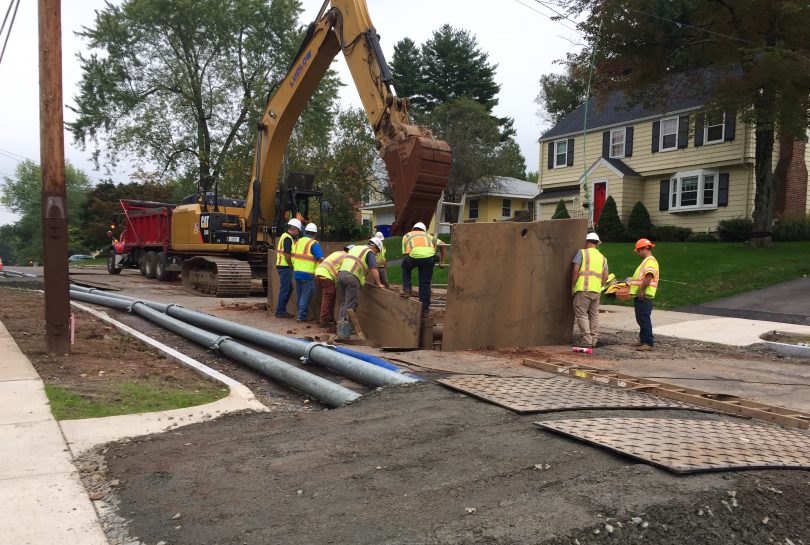 An MDC contractor excavated the roadway in front of 55 Linbrook Rd. to reach a pipe with a collapsed liner that caused a major sewage backup. Ramps have been built to provide access from driveways to the road where bypass piping has been laid. Photo credit: Ronni Newton (we-ha.com file photo)

The Metropolitan District Commission completed an initial clean-up of Linbrook Road on Sunday afternoon, but an inspection of a section of piping will continue for the next week before a plan for repair is finalized.

Linbrook Road in West Hartford now has one lane passable to local traffic, but the Metropolitan District Commission (MDC) is still in the process of finalizing a plan to make permanent repairs to a section of pipe where a failed liner led to the backup of sewage into the roadway and the basements of 20 residences.

According to MDC spokesperson Kerry Martin, a total of 300 feet of pipe liner will be replaced.

An MDC contractor had to excavate a large section of roadway to access the pipe in order to discover what caused Wednesday morning’s blockage. Once the pipe could be inspected, it was discovered that 60 feet of the lining, which had been installed by a contractor over the summer as part of the process of rehabilitating the piping, had failed.

“MDC will not accept the same product that was used to line this pipe,” Martin said in an email. “Instead, [the MDC] has directed the contractor to find a proven alternative. The new proposed lining product performance will be rigorously reviewed and tested by the MDC before installation is approved.”

In an email Sunday afternoon, Martin said that the excavation trench had been temporarily backfilled and the area cleaned up to protect the underground utilities, enabling the opening of one lane of traffic on the south side of the roadway.

It will take at least another week to complete full inspection of the lined pipe, and the integrity of each section will be determined, Martin’s email said. Additional bypass piping will be required to reduce high flow an enable the use of cameras to complete the inspection.

The MDC has also offered to install backwater valves on the impacted section of Linbrook Road, at no cost to the homeowners, Martin said. The backwater valves – also called “backflow preventers” or “sewer backup valves” – prevent sewage from flowing back into the house. For new construction, backwater valves are required by code to be installed when a house has a fixture installed below street level.

Installation of the valves will begin on Monday, and the MDC is continuing to contact property owners to perform evaluations and determine if a valve would be appropriate, Martin said.