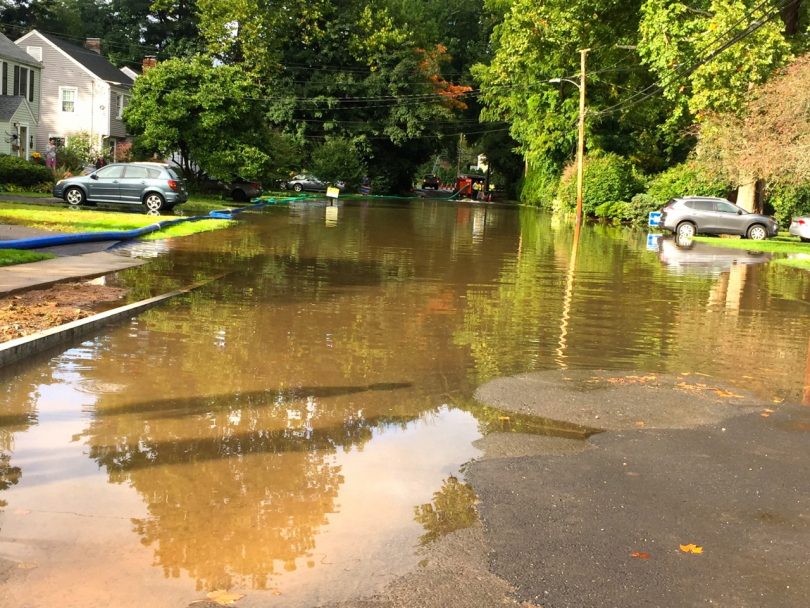 [Updated] MDC crews are still working to clean up and find the source of the blockage after residents in the area of Linbrook Road in West Hartford awoke to a flooded roadway Wednesday morning, and some had several feet of sewer water in their basements. 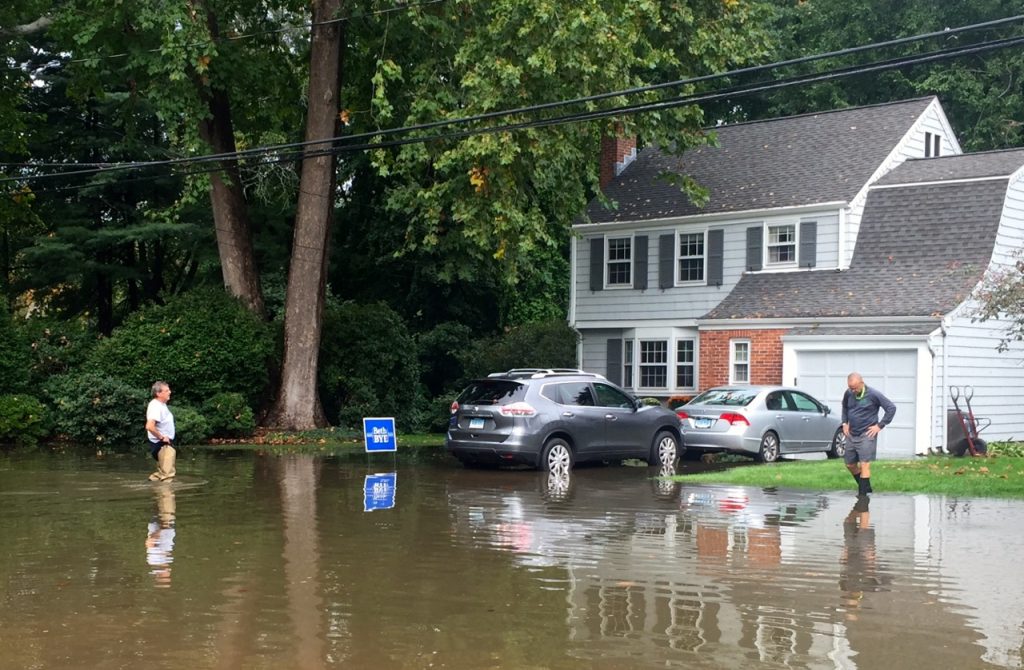 Linbrook Road resident David Fink wears waders to show how deep the water in the roadway is. One of his neighbors is at right. Photo credit: Ronni Newton

Metropolitan District Commission (MDC) spokesperson Kerry Martin said late Wednesday afternoon that Linbrook Road is passable now after crews have spent the day pumping out sewer water that had flooded the roadway as well as the basements of multiple homes in the area.

The source of the blockage in the 27-inch sewer pipe that resulted in the flooding has yet to be pinpointed, Martin said.

“The sewer [pipe] still has a lot of water in it so we can’t see inside,” Martin said. Two large sewer pipes flow into a 27-inch pipe on Linbrook and contribute to the water in the pipe, with recent heavy rains contributing to the flow of water even though the pipes are dedicated sanitary sewers rather than storm drains.

“Then we can mobilize to fix the problem. We hope to do that tonight,” Martin said.

North Main Street should still have at least one lane open in each direction while the crews are working, she said.

As for the residents who had water in their basements, Martin said that MDC staff has been in contact with them throughout the day, and three or four ServPro crews have been working to pump out the water, which ranged from a puddle to as much as five feet. Nearly all have been pumped out.

“We’ve gotten hotel rooms for the displaced,” Martin said. She did not have details about how many residents needed to leave their homes because of the sewer water that filled their basements and may have impacted hot water heaters or other appliances located there. Some had opted not to leave their homes even though it was offered, she said.

Some residents were just returning from work on Wednesday afternoon, and learning about the problem. The MDC had been attempting to contact residents all day, Martin said, but couldn’t locate everyone.

After the removal of the water, Martin said that contractors will remove all contaminated items, including flooring and drywall, and begin the process of cleaning and sanitizing the basements.

Residents of a the western portion of Linbrook Road, that has been under construction for about 18 months, were disgusted when they woke up Wednesday morning – some to wet basements and all to a roadway that could be described as a cesspool.

Rick Bush, who lives on the north side of Linbrook Road said that when he went downstairs on Wednesday morning at abut 6 a.m., he found about 4 feet of water in his finished basement, swamping the furniture, accessories, mementos, children’s toys, and everything else with dirty water that had backed up from what appears to be a blocked sewer pipe.

The roadway in front of his house was wet, but closer to North Main Street there was as much as 30 inches of standing, dirty water in the middle of the street and spilling over onto sidewalks and lawns.

His next door neighbor had gone downstairs to his basement at 5 a.m. and found it wet, but had three pumps working to keep it from flooding. He that without those pumps he would likely also have had about 4 feet of water. “It’s coming so fast it’s like fighting the blob,” he said.

“I’m literally sick,” said Mary Lee Wakefield, who lives on the south side of Linbrook and has more than a foot of sewer water in her backyard. Sump pumps have thus far kept it from flooding her basement.

Metropolitan District Commission (MDC) spokesperson Kerry Martin said in an email that “MDC crews have determined that the flooding on Linbrook Road, West Hartford, may be due to a sewer blockage in the area.”

MDC crews were on the scene Wednesday, and had set up a system to pump the water out of the roadway.

“Typically, when a sewer blockage is suspected, the first step is to begin ‘bypass pumping’ – pumping wastewater around the potentially blocked area of sewer so as to continue safe, sanitary wastewater service while working to locate and relieve the possible blockage. This also allows crews to get a clearer picture of the condition of the sewer and possible cause of any blockage,” Martin said in her email.

According to Martin, a contractor had performed sewer pipe restoration work in the Linbrook Road area this past summer.

Martin told We-Ha.com in a phone interview that the MDC is aware of 20 homes thus far that have been impacted. 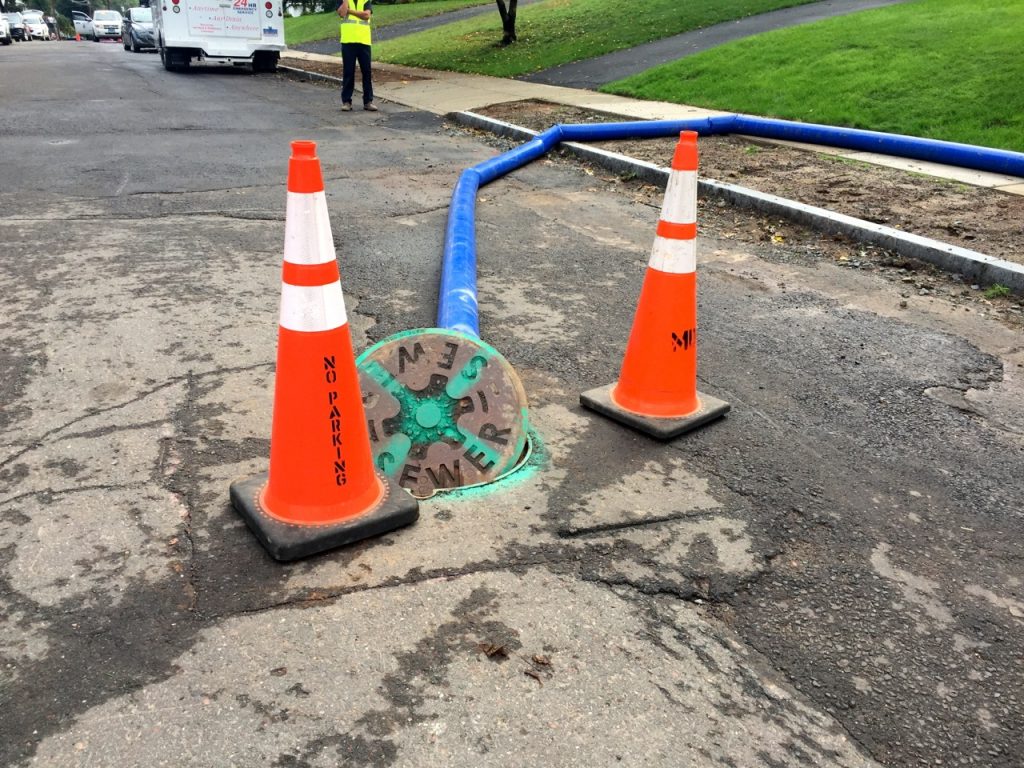 MDC crews have set up a bypass pipe on Linbrook Road to remove the sewer water that is flooding Linbrook Road in West Hartford. Photo credit: Ronni Newton

Because of the bypass pipe that has been put into place, sewer service to residents of the area is not interrupted and they can still run water and flush their toilets, she said.

When asked about safety, Martin said that the water is sewer water. “People shouldn’t be walking around in it. Whatever you put down your drain or in your sewer is in it,” she said.

Because of recent heavy rains, the sewer water has been diluted, Martin said. That’s actually not supposed to happen, but she said that sometimes homeowners have their rain leaders connected directly to the sewer system. This particular area of West Hartford does not have combined sanitary and storm water drains, she said, but storm water still gets into the system.

A time estimate for clean-up of the water in the roadway has not been provided yet by the MDC, but Martin said that the pumping is working and the level had already dropped by several inches. Until it’s low enough, crews can’t even begin to pinpoint the exact source of the problem or begin digging to access it.

When the contractor did the restoration work this summer, a new liner was installed – a common and more efficient practice in rehabilitation of sewer pipes, Martin said. The blockage “is probably due to a crack or some of the pipe itself failing,” she said, but crews don’t yet know exactly where it is.

The contractor that did the work is on scene and assisting with the investigation, Martin said.

MDC staff is also getting in touch with all affected residents and has brought in a contractor to begin clean-up work as soon as the water flow is stopped.

Some homeowners had a lot of water, while others had only a small puddle, Martin said.

The MDC’s clean-up contractor will “get the water out of the basement and make the basement clean,” Martin said. That involves removing all contaminated material, including drywall.

As for restoration, Martin said that a commitment can’t be made at this time because the MDC doesn’t yet know what happened to cause the blockage and backup.

A portion of Linbrook Road will remain closed to traffic, and once the water has receded and crews are able to begin digging, the area of road closure will likely be reduced, Martin said. 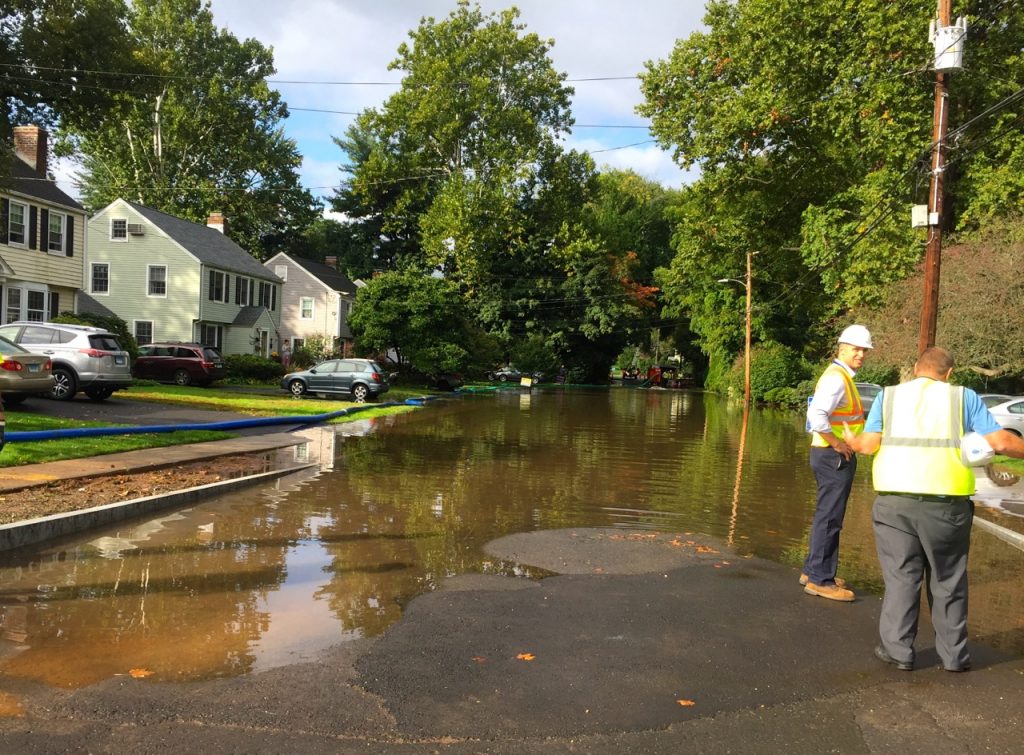 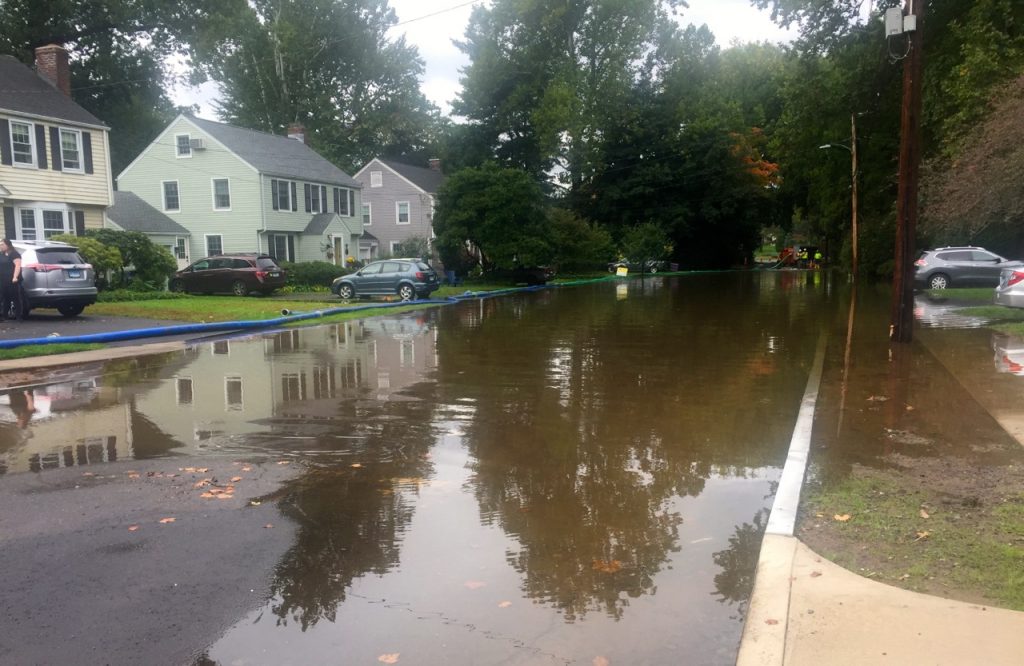 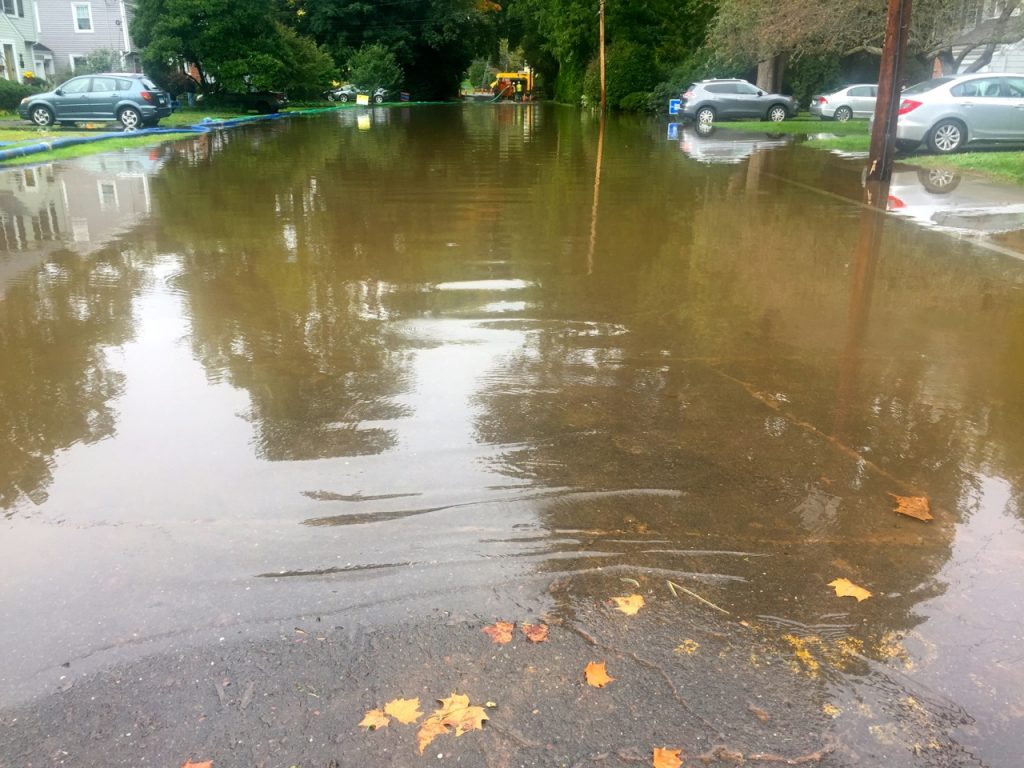 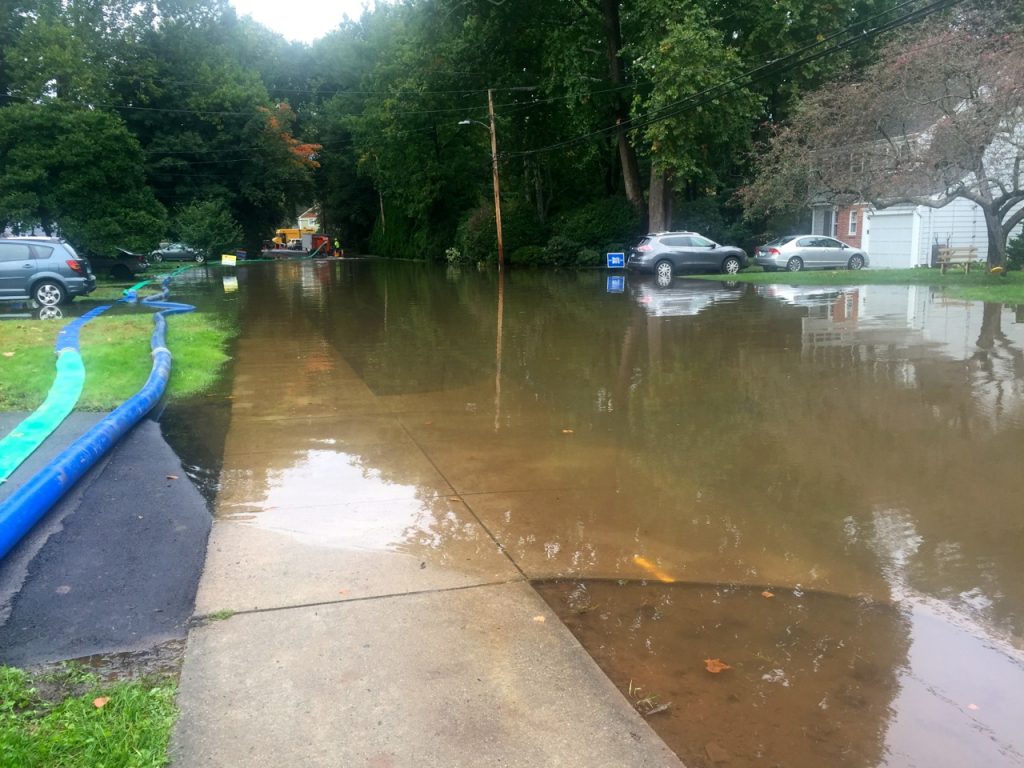 Linbrook Road in West Hartford was flooded with sewer water Wednesday morning due to a blocked sewer pipe. At left is bypass piping set up by the MDC. Photo credit: Ronni Newton 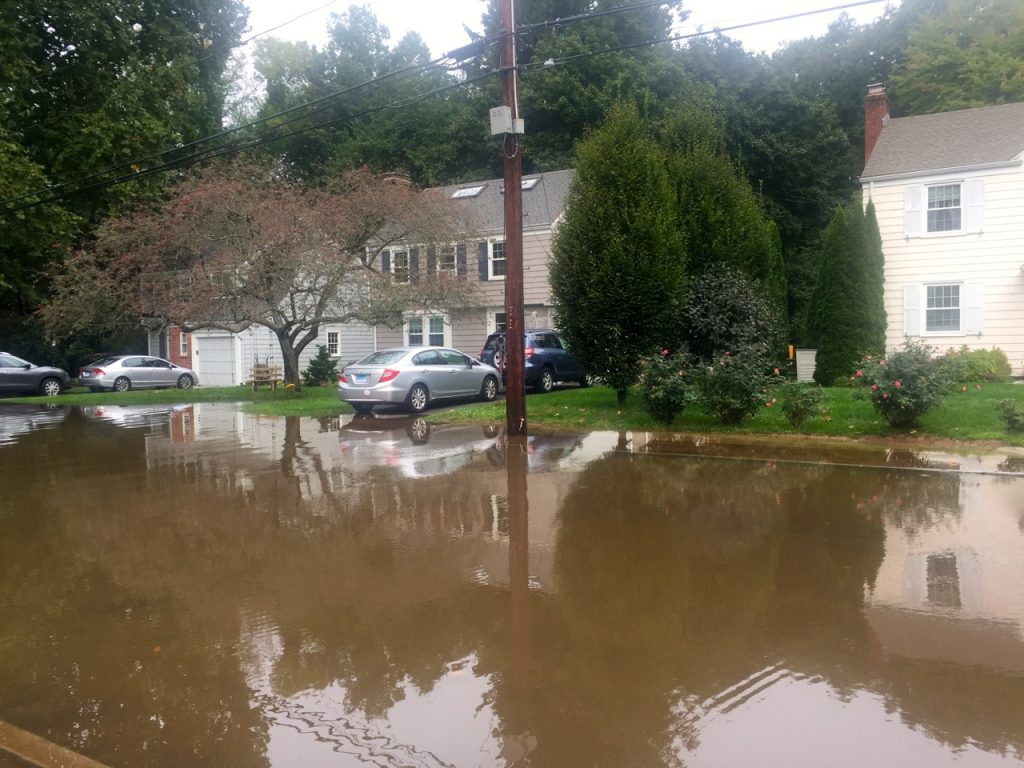 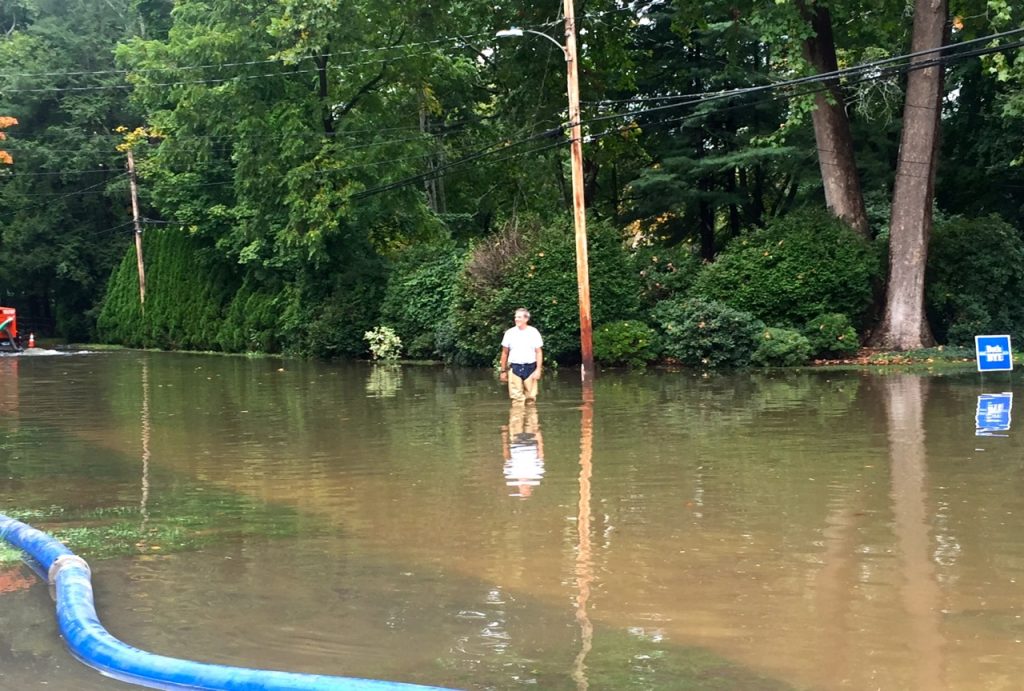 David Fink (in waders) said that there is about 30 inches of water in the deepest part of Linbrook Road. Photo credit: Ronni Newton 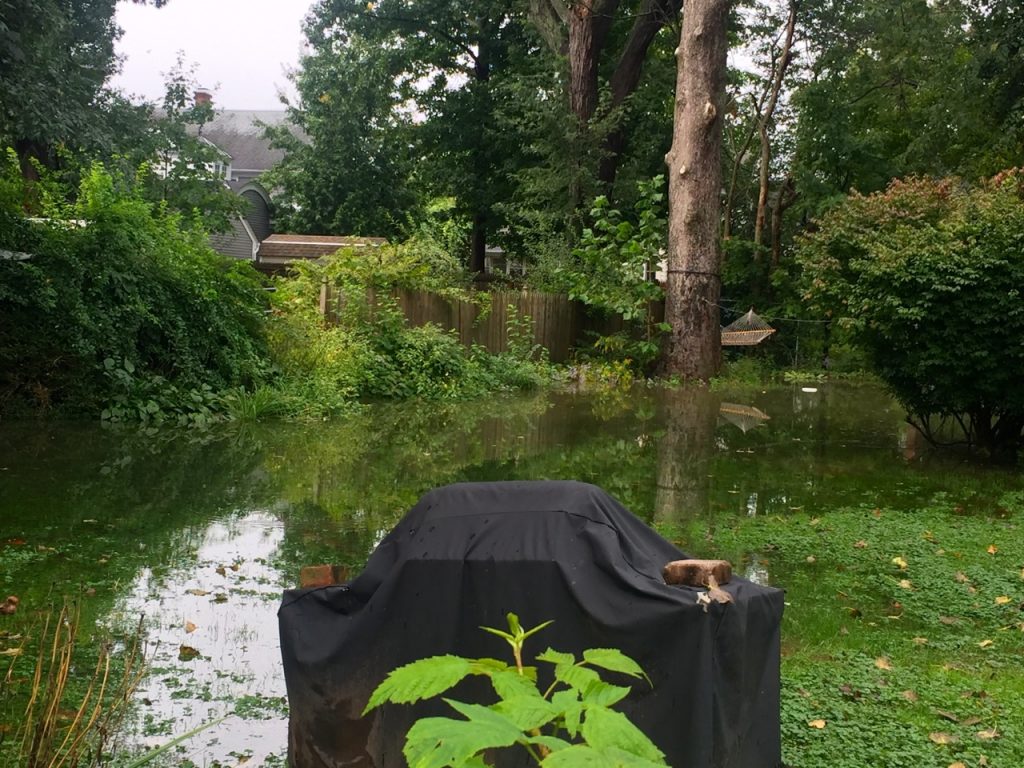 Mary Lee Wakefield’s backyard on Linbrook Road in West Hartford has about a foot of standing sewer water in it. Photo credit: Ronni Newton 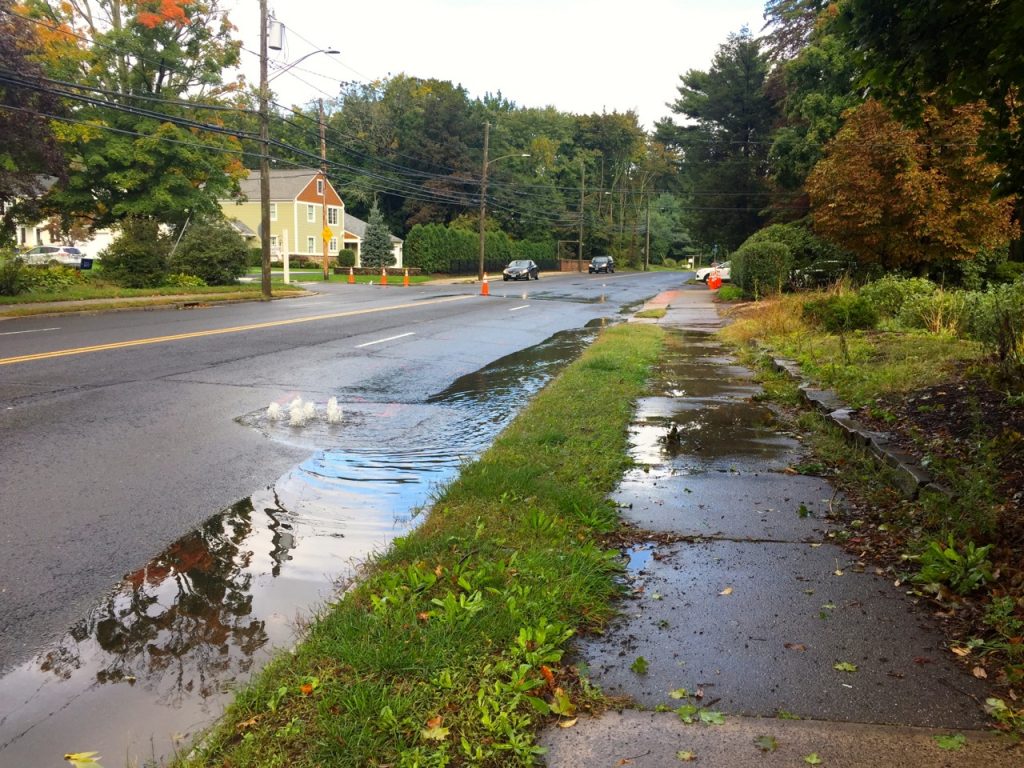