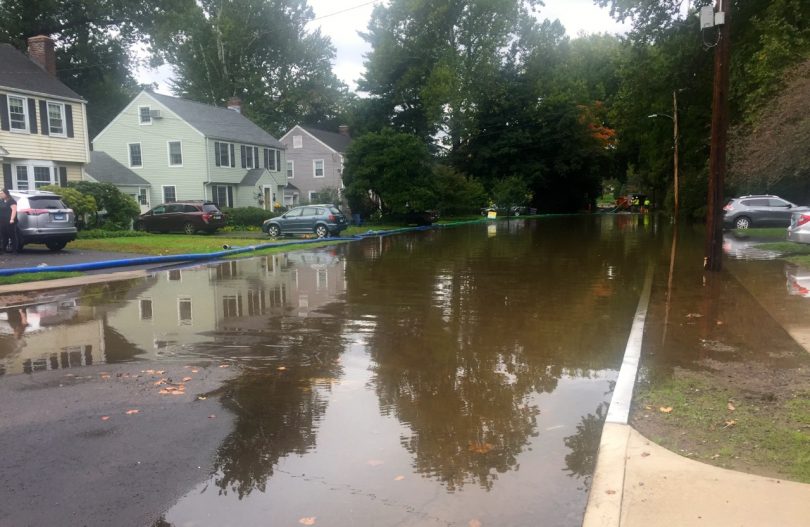 A contractor will begin installation of the replacement lining in a sewer pipe on Linbrook Road in West Hartford early Thursday morning.

Conditions on Linbrook Road in West Hartford are returning to normal about three weeks after residents woke up to find the roadway, yards, and many basements flooded by sewer water.

Metropolitan District Commission (MDC) spokesperson Kerry Martin said in an email Tuesday afternoon that at 3 a.m. on Thursday, Oct. 25, contractor Precision Trenchless will begin installing a replacement liner, made by a different company than the one that  manufactured the failed liner, in 300 feet of a sewer pipe on Linbrook Road. The installation and inspection is expected to take about 18 hours.

By-pass pumping has been in place since the back-up occurred, and because of the network of temporary pipes the MDC had to construct driveway ramps for many of the Linbrook Road residents to maintain access between driveways and the roadway. The by-pass pumping equipment will be removed once in-place testing of the new liner is complete and the pipe is put into use.

The MDC anticipates that the by-pass pumping equipment should be removed over the weekend, along with the ramps, and the area will then be cleaned up. Driveway access will be maintained, with the exception of when an individual ramp is being removed, the MDC said.

The roadway will be swept, and the process of restoring lawns, landscaping, and walkways will also get underway.

MDC representatives said at a meeting for area residents last Thursday that the goal is to have Linbrook Road as well as Montclair Drive paved by the end of October. A copy of the entire PowerPoint presentation made that night can be found here.

A total of 26 homes were affected by the sewer backup. The MDC performed sewer backup prevention assessments at those homes and installed check valves or backwater valves in area homes with fixtures below grade level.

The MDC also installed sump pumps and other prevention devices, and hired contractors to repair and/or replace mechanical systems, including hot water heaters, boilers, and gas furnaces that were damaged due to the sewage backup.

The MDC has established a page on its website which continues to be updated with information about the Linbrook Road area.