CT Murals is partnering with multiple local groups to paint a large-scale mural on the side of the Noah Webster Library in West Hartford Center this spring. 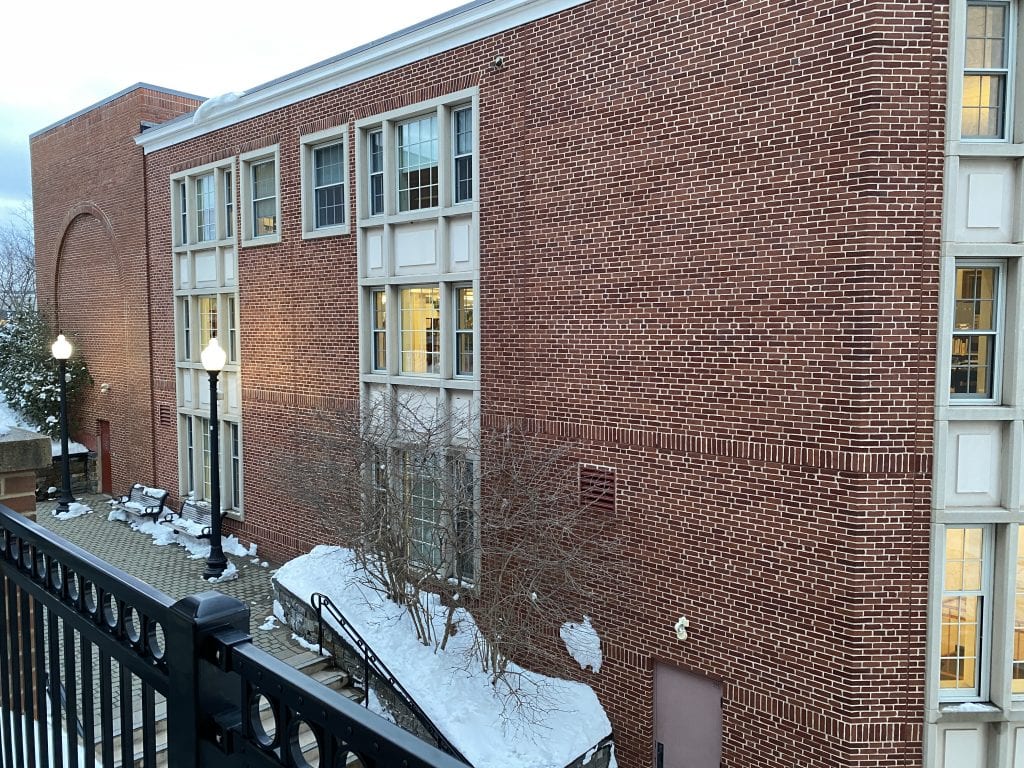 The entire side wall of the Noah Webster will be transformed with a mural as part of the MLK39 project. Courtesy image

West Hartford will soon be making a bold statement about the town’s commitment to unity, peace, and justice, with a large-scale mural that will be painted on the entire south wall of the Noah Webster Library that leads from South Main Street to the Blue Back Square courtyard.

The mural, which will stretch from the ground to the roof, will also wrap around the corner to a portion of the building that fronts South Main Street.

The multi-faceted project is part of the MLK39 initiative and the West Hartford installation is being created through a partnership between CT Murals, the Town of West Hartford, the CT Center for Nonviolence, Concerned Parents of Color, Unity Green Committee, and West Hartford African American Social and Cultural Organization (WHAASCO), as well as other members of the community and organizations, including the town’s youth.

The mural will be officially unveiled on June 19, as part of the West Hartford’s Juneteenth celebration.

“West Hartford is committed to being a welcoming and inclusive community, but we know there is still work to be done,” Mayor Shari Cantor said. “This mural, on the wall of our main library in the heart of our community, will be a prominent and visible sign of that commitment and our intention to not only honor MLK’s legacy but also the legacy of others who support civil rights and the important messages of unity, love, peace and justice.”

Connecticut Murals is a project of RiseUP For the Arts, and Matt Conway, executive director of RiseUP, said the inspiration for the MLK39 project began when a single mural, painted by artist Ben Keller, was unveiled in Manchester on Martin Luther King Jr. Day this year.

“The community outpouring was incredible, so powerful,” Conway said. They decided to make the project a statewide effort, expanding it to 39 communities to mark the 39 years of Martin Luther King Jr.’s life.

Nationally-recognized artist Corey Pane, a West Hartford resident who has become well known for painting the cleats of professional athletes, has been chosen to create the West Hartford mural. He said he’s worked on several other projects with CT Murals.

Some of Pane’s work can also be seen locally, including the tribute he created to rapper Nipsey Hussle in Hartford and a mural on the wall inside the new BIRDCODE restaurant on Park Road.

“Every mural is going to be different,” Conway said. And while Pane has already provided a sketch of his vision for the mural, the design is far from complete and there is plenty of opportunity for community input – which is a key component of the project.

Quotes from Martin Luther King, as well as images and words from other civil rights leaders that will be suggested by members of the community, will also be incorporated. The plan already include fingers making a peace sign, painted red, to symbolize “Bloody Sunday” in Selma. The images convey positivity and pain at the same time, Conway said.

“My whole vision for this one is a focus on Martin Luther King, on what brings people together,” Pane said of his sketch for the mural. The design incorporates skin-toned ribbons in various shades to represent unity across races, and an image of Mahatma Gandhi.

“Different images of nature are incorporated in the mural. The dove is a messenger for peace and love, while the crow symbolizes transformation, change, and adaption. The butterfly signifies rebirth and looking toward the future. A hummingbird is included to bring feelings of joy, love, and a healing,” Pane wrote in his vision statement.

The design will likely evolve a bit as he works, Pane said.

“Most of it will be done with spray paint,” Pane said, but he will also use regular house paint. The mural should take about a week to create, he said. 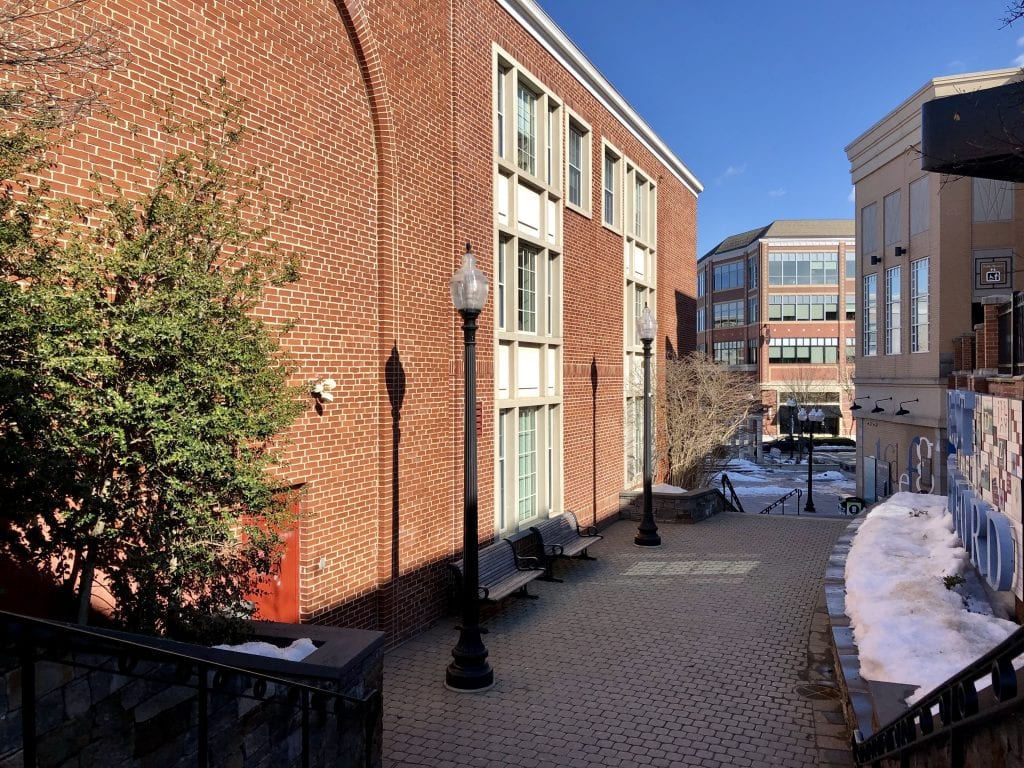 This exterior wall of the Noah Webster Library in West Hartford Center leading down the stair to Blue Back Square will be transformed with a mural focused on symbols of racial equity. Photo credit: Ronni Newton

Earl Exum, president of WHAASCO, said he thinks the mural is a great project, and an important step in West Hartford’s progress.

This year marked the 25th anniversary of West Hartford’s Martin Luther King Day celebration, but Exum said when WHAASCO hosted the first one there was reluctance from the town and the community to engage what has now become a popular and highly-regarded event.

“There was a fight to make MLK Day a holiday, but now everybody accepts it,” he said.

“It’s important to mark that in 2021, MLK is ‘social justice light,'” Exum said. He sees the mural as the “opportunity to recognize other important figures who represent social justice and Black agency, to help us move forward.”

There are many other notable Black historical figures like Frederick Douglass – as well as Lemuel Haynes, who was born in West Hartford – whom Exum would like to see represented in the mural to expand people’s perspectives.

Adrienne Billings-Smith, founder and president of Concerned Parents of Color of West Hartford and co-chair of the West Hartford Human Rights Commission said she is very excited about the mural – and in particular its connection to the renaming of Unity Green, a project which she spearheaded and helped bring to fruition, along with the town’s celebration of Juneteenth.

“I’m super excited about it, because when we did the renaming of Unity Green we wanted it to be bigger than a piece of land,” Billings-Smith said.

The unveiling of the mural and the dedication of Unity Green will be part of celebration of Juneteenth on June 19, 2021.

“This is more like a movement,” Billings-Smith said. It’s not just about Martin Luther King, “it’s the message, it’s the essence,” she said. She’s glad to see the opportunity for the entire community, including the schools, involved and part of the learning process.

Billings-Smith hopes that all of these efforts will be part of an overall plan to highlight the important figures in our local history, and would like to see the QR codes that will be installed on signage in Unity Green mark other significant places in town and provide social justice messaging.

CT Murals tries to find artists that live in the community, but part of the the organization’s goal is also an apprenticeship program for emerging artists. Experienced artists like Pane, or like Keller, who painted the MLK mural in Manchester (as well as the mural on New Britain Avenue in the Elmwood section of West Hartford) work with less experienced artists who learn their craft.

Conway is hoping that emerging artists of color, in particular, will have the opportunity to participate in this project.

Other components of CT Mural’s MLK39 project include a half-day session focused on the principles of nonviolence espoused by Martin Luther King Jr. That session will be hosted by the CT Center for Nonviolence.

Volunteers, particularly youth from West Hartford, will be invited to join Pane for a “paint by numbers” volunteer day.

The mural will be a long-term installation in West Hartford. “Murals like this can last 15-20 years,” Conway said.

“It will be permanent, and part of Unity Green,” he said, referencing the dedication of West Hartford’s town green that will also be celebrated on Juneteenth.

To raise money for this project, CT Murals is holding a crowdsourcing fundraiser through Sustainable CT with the goal of raising $12,500. If that sum is raised, the project will be eligible for a $7,500 match through Sustainable CT’s Community Match Fund – an innovative funding resource for public, community-led sustainability projects. The just-launched campaign, which has not even been widely publicized, has already raised $2,750. More information, and the link to donate can be found here.

West Hartford will have one of the first MLK murals in Connecticut, and one of six that should be done in time for Juneteenth. Plans for 20 are underway, Conway said, and the goal is to have at least 39 ready in time for Martin Luther King Day in 2022.

“Once West Hartford and Bloomfield are done, I think every town in the state will want one,” Conway said. If there are more than 39 in Connecticut, that will not be a problem.

Conway said he’d like to see this program go national.

“For me, personally, I’ve been involved with and gone to these diversity and inclusion conversations, and I don’t think it’s enough. We need to go out there and show [people],” Conway said. “We think public art is the way to drive that dialogue, to drive that information.”

Getting younger people involved in the project is also important, Pane added, particularly for emerging artists of color in the state.

The newly-formed West Hartford Commission on the Arts will also be involved in providing outreach and engaging artists who have been impacted by the pandemic. CT Murals is will provide a paid apprenticeship to local artists of color to work alongside Pane. An application can be found here.

“We really want this to be the voice of West Hartford, particularly of the African American community,” Conway said.

Community members are invited to complete a survey to share their ideas about what they would want to see reflected in the mural, and can also sign up to volunteer through this link.