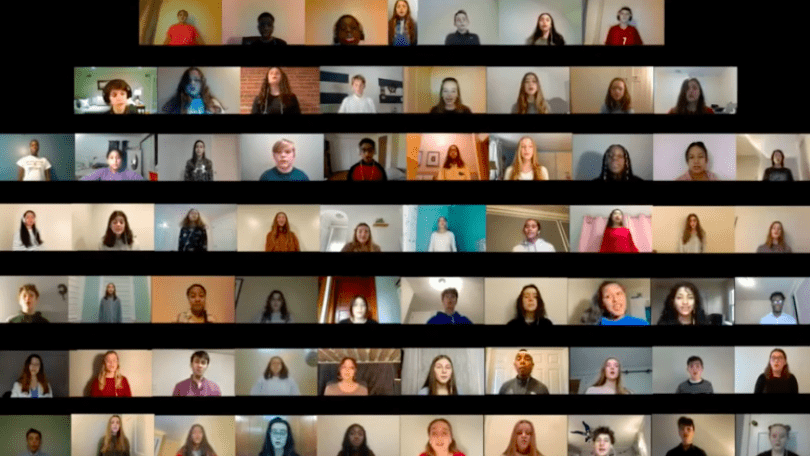 The annual singing of 'We Shall Overcome' to end West Hartford's 25th Annual Celebration of the Life of Martin Luther King Jr. was performed by choirs from Conard, Hall, Bristow, Sedgwick, and King Philip, and the audience was invited to join them from their homes. Screenshot (we-ha.com file photo) 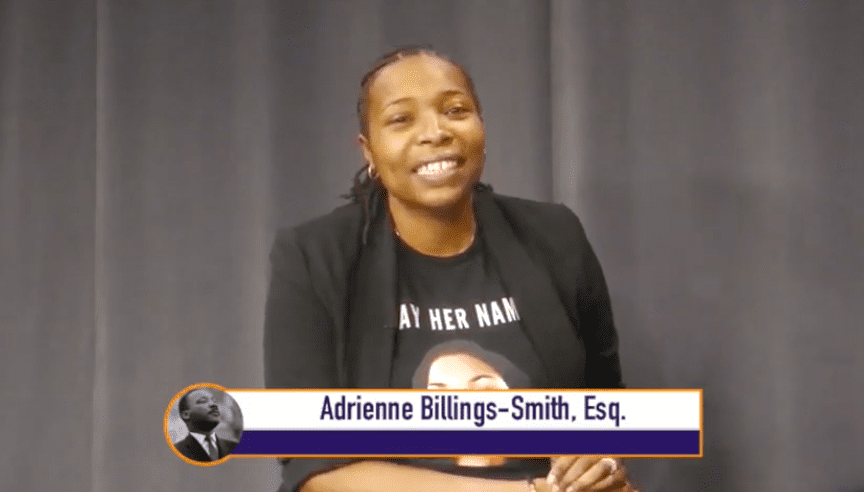 The participants may not have been together in the West Hartford Town Hall auditorium for the town’s traditional celebration of the life of Dr. Martin Luther King, Jr., but the message that “we are all in this together” permeated the speeches and songs that were combined by West Hartford Community Interactive into a touching and thought-provoking video which debuted as a virtual event at 10 a.m. on Jan. 18 – the time the celebration would have been held in person if not for the lingering COVID-19 pandemic.

The theme, based on King’s work, was “Where Do We Go From Here? Chaos or Community?” – a theme each speaker expounded upon with their own advice, based on their unique experiences.

“The time to do right is right now,” Mayor Shari Cantor said, invoking the words of King as she expressed her hope that the nation will begin to be brought back together following the inauguration of Joe Biden and Kamala Harris on Wednesday.

People are struggling everywhere, Cantor said, and the town’s distribution of food to those in need is up 50% this year. She urged the community to support our local businesses whenever possible, and when they are eligible, to obtain the COVID-19 vaccine.

Between and during speeches and songs, the words of King flashed on the screen. 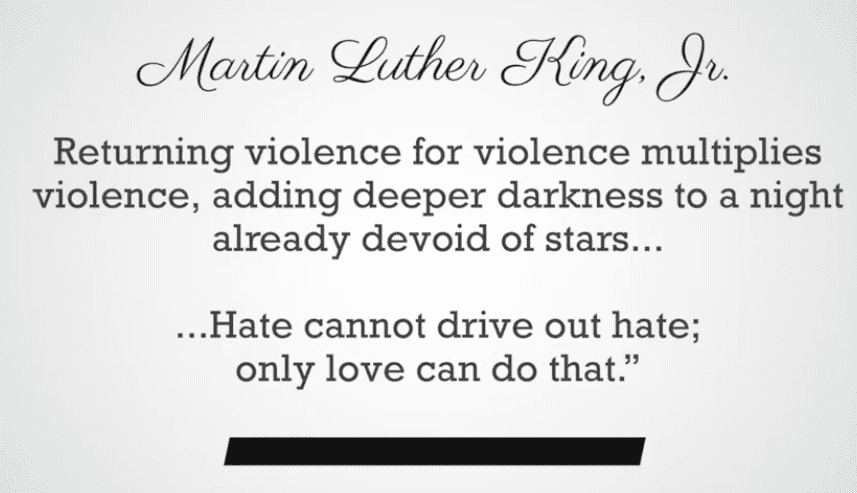 Adrienne Billings-Smith, founder and president of Concerned Parents of Color of West Hartford and co-chair of the West Hartford’s Human Rights Commission who is also a local attorney and flight attendant, served as emcee.

“Power without love is reckless and abusive, and love without power is sentimental and anemic,” she said, reading the words of King. “Those words still ring true today.” 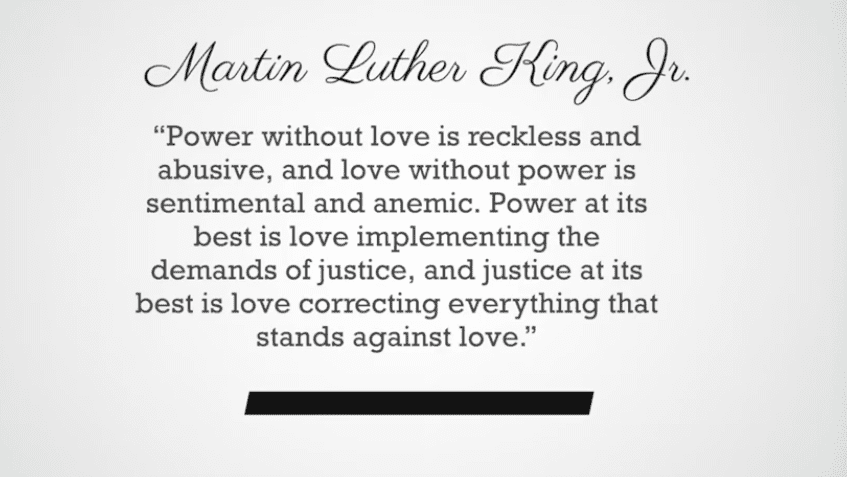 “Martin Luther King would teach us not to give up,” said Taylor Santana of Conard High School, one of the two student speakers.

Santana said she was lucky to have two college-educated parents to help her with her school work, but many Black students are not that lucky and the achievement gap, which continues to be perpetuated, must be addressed. 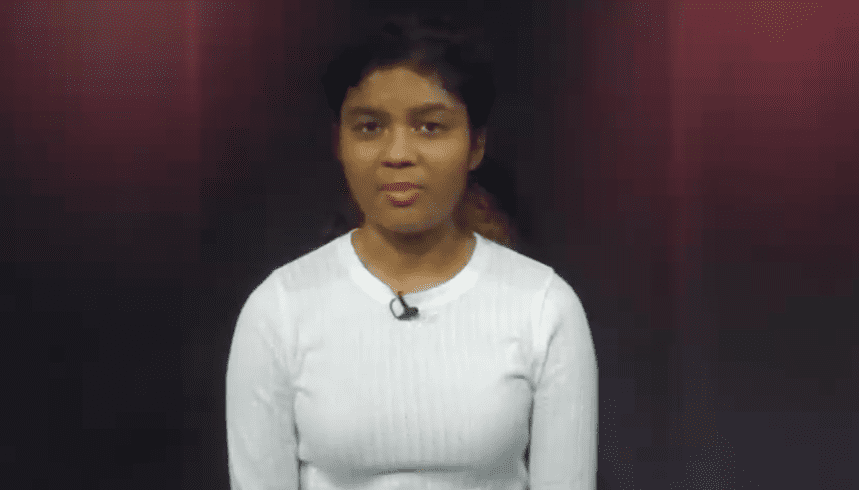 “We have to support Black communities and provide the resources for them to thrive,” Santana said.

Americans must familiarize themselves with the struggles of Black people in order to understand injustice, and move forward on a path toward “liberty, equality, and justice,” she said. 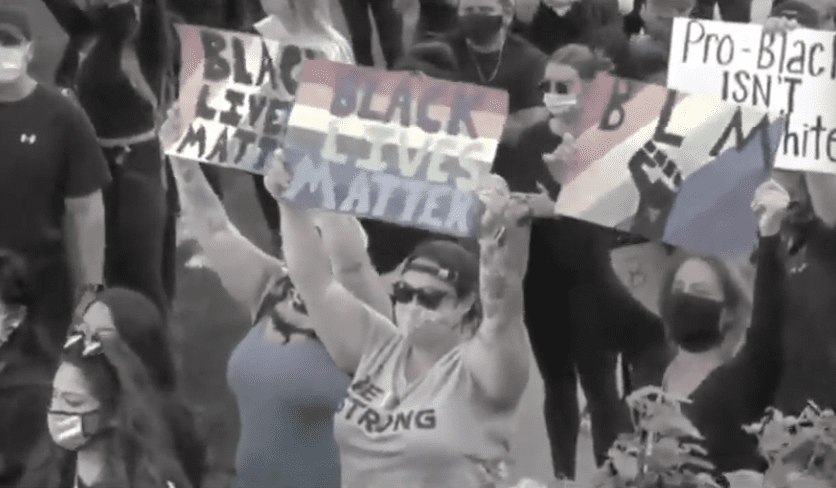 A montage of images, some from protests held in West Hartford last summer, was the backdrop for the speech by Megan Rodriguez-Hawkins of Hall High School. Screenshot

As a white Latina, Rodriguez-Hawkins said she had to figure out where she fit in, how she could help to support King’s message about how to create a better world, a world “worthy of our children.”

The first step, she said, is looking at where we are now, and she said her first step, during the early days of the pandemic, included advocating for a more inclusive history curriculum. She also joined others who rallied during the pandemic.

We do “whatever we can,” said Rodriguez-Hawkins. Martin Luther King and those who joined him in his work, “didn’t start out as world leaders; they started out tired.”

“To answer the question what’s next, I believe I’ll have to leave you with a cliffhanger … there is no answer,” Rodriguez-Hawkins said.

Addressing the wealth gap, looking out for one another, and being proud of who you are as a person are all critical, she said. “I have importance and everyone else does.” 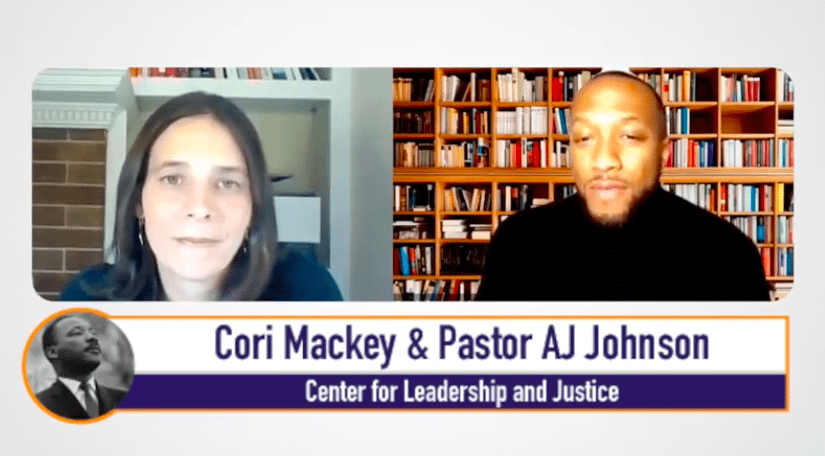 Keynote speakers were Cori Mackey, executive director of the Center for Leadership and Justice (CLJ) whose background is in urban ministry, social justice work, nonprofit management, and faith-based community organizing; and Pastor AJ Johnson of Urban Hope Refuge Church in Hartford’s north end, a key leader the Fight for 15 Campaign who is active in many social justice movements.

They shared and contrasted their diverse backgrounds and upbringings – and experience with institutionalized racism – and noted the profound difference in the lives of children who are from West Hartford as compared to those who are from just steps away, where Farmington Avenue crosses Prospect into Hartford.

“To change the power in the state we need to organize,” Mackey said, which they are doing through the Greater Hartford Interfaith Action Alliance (GHIAA).

Johnson called for the public to call, write, or text Gov. Ned Lamont, whom he said has been silent on the call to recognize racism as a public health crisis.

Mackey said she is pleased that West Hartford Public Schools are one of 10 districts in the area that is committed to anti-racism training, but all must be enraged about the inequity in school funding.

Both also called for the legislature to end to welfare liens, which allow the state to place a lien on the real property of those who have received certain types of public assistance. The practice undermines efforts to escape a cycle of poverty, Mackey and Johnson said.

A “radical transformation” and restructuring of who has power is needed, otherwise there is “nowhere to go from here other than the depths of denial,” Johnson said.

“Dr. King said the time is always right to do what is right. We invite you to join us on this journey of justice,” said Johnson.

The video was punctuated by the music of John Legend’s “Glory,” played by Comiso as a montage of images and video from Black Lives Matter rallies in West Hartford, as well as other events, appeared on the screen.

Billings-Smith spoke about recent change that is taking place in town: the renaming of Unity Green, which had for centuries been named for slaveholder Timothy Goodman. 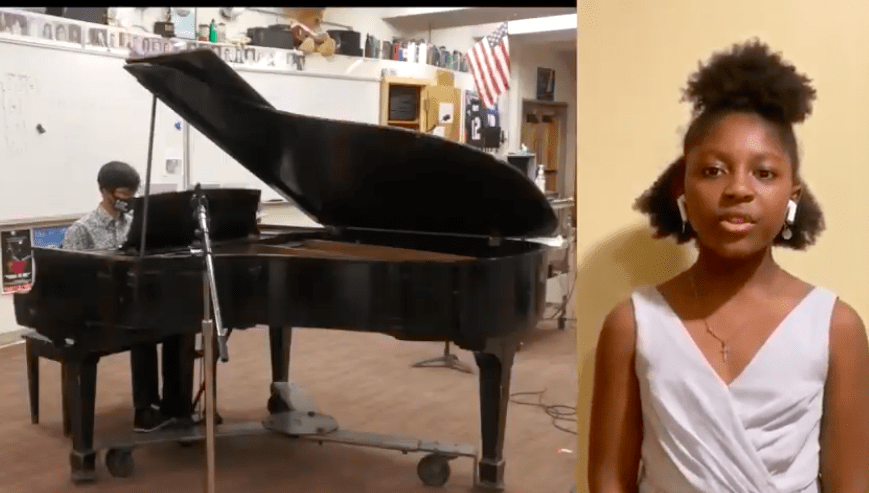 Clergy from a wide variety of faiths have traditionally been invited to give the invocation, but in the virtual format it was delivered by nine representatives of the Connecticut Council for Inter-religious Understanding, who all shared some of King’s words.

“We have a lot of work to do … we need to bend the arc,” he said, seeking justice in housing, education, the workplace, healthcare. The pandemic has disproportionately impacted people of color, he said.

Today, in part, is a celebration of the energy and initiative of youth to make a difference.

“I am proud and honored to join in that fight for racial justice,” he said.

Before the traditional singing of “We Shall Overcome” – a virtual performance by choirs from Conard, Hall, Bristow, Sedgwick, and King Philip – Billings-Smith ended the virtual event with the words of King: “Without love there is no reason to know anyone, for love will in the end connect us to our neighbors, our children, and our hearts.”

The entire event, created by West Hartford Community Interactive with the collaboration of many from the town and schools, is now available for viewing on YouTube below. 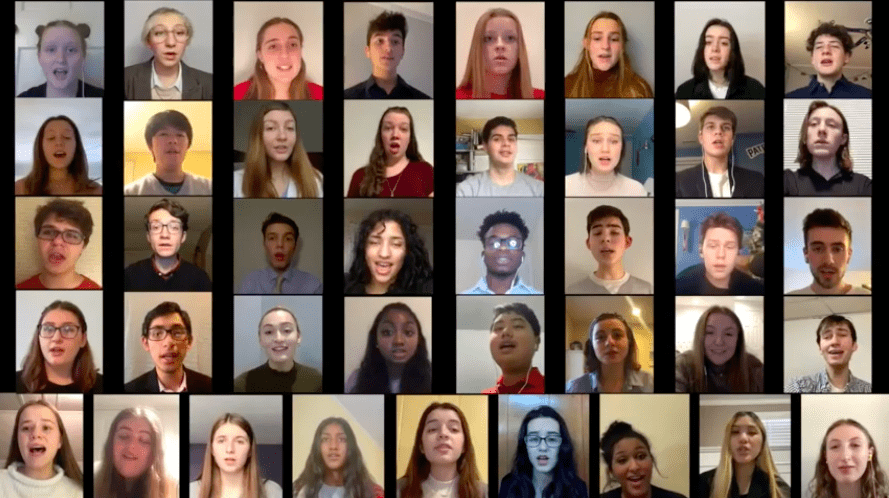 The second verse of ‘Lift Ev’ry Voice and Sing’ was performed virtual by choirs from Conard and Hall high schools. Screenshot 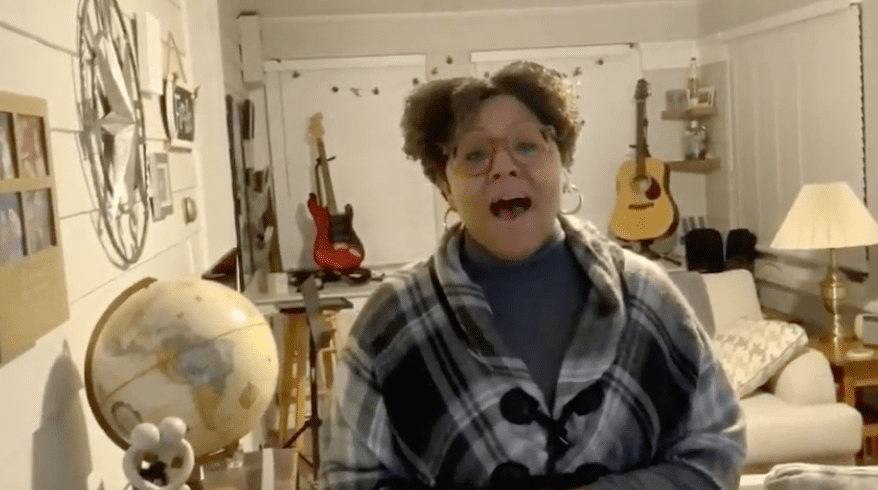 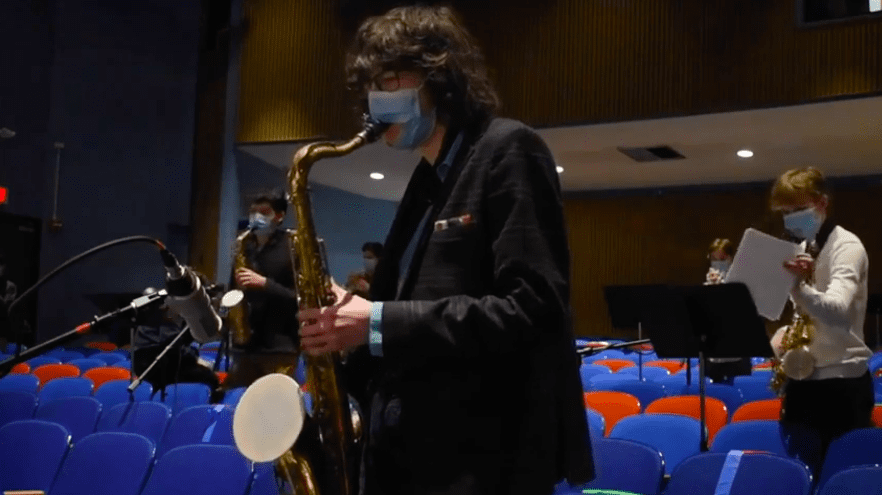