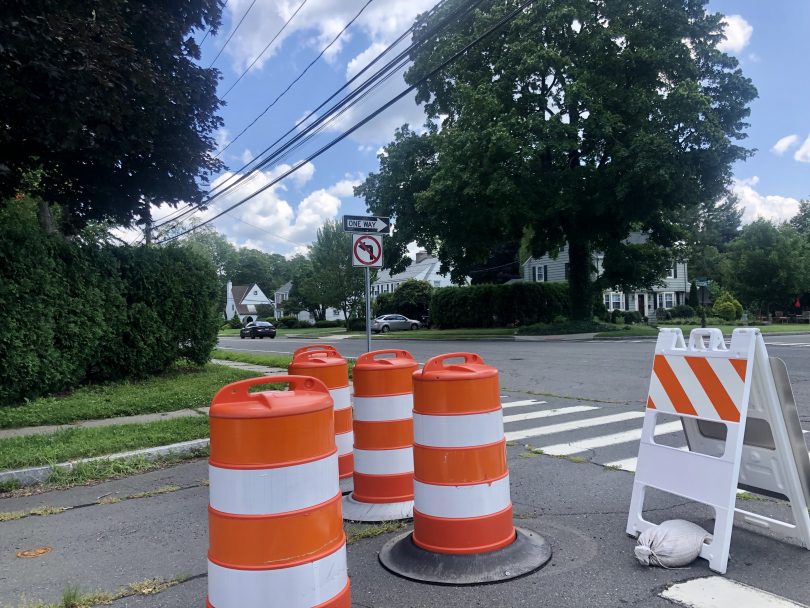 Barrels at the intersection of Newport Avenue and Sedgwick Road will be replaced this fall with permanent semi-diverters. Photo credit: Ronni Newton

The final round of repaving for 2021 is scheduled to begin in September, and permanent semi-diverters will be installed on Four Mile Road and Newport Avenue. 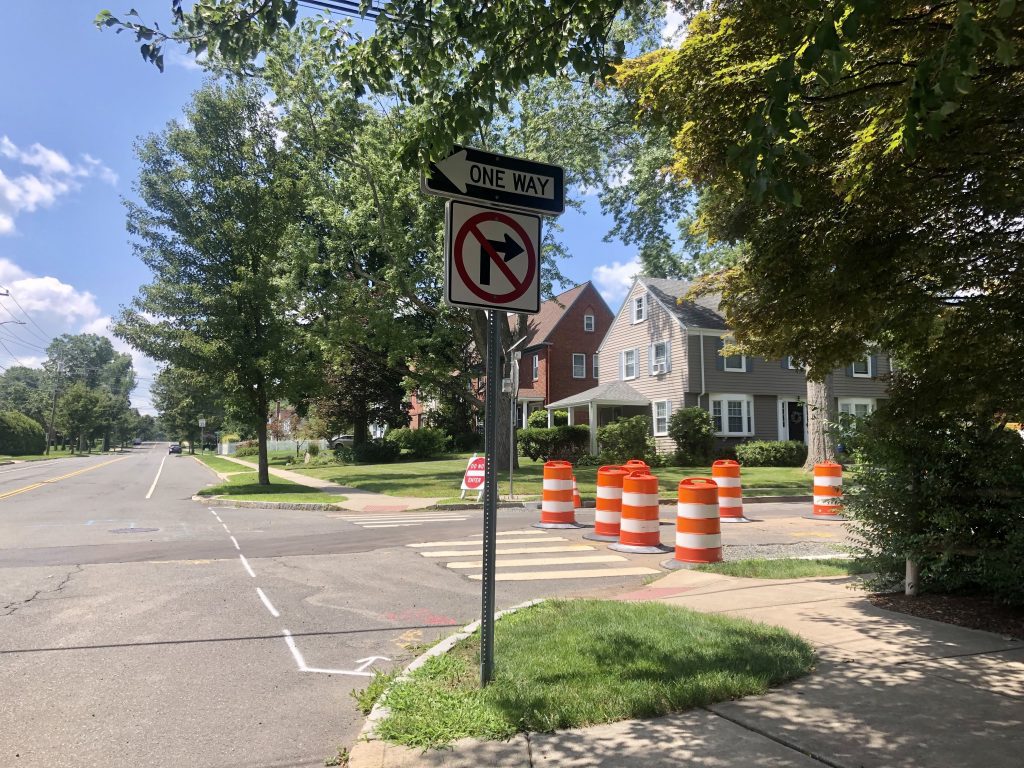 North side of the intersection of Four Mile Road and Boulevard. Photo credit: Ronni Newton

Road projects of various types – the road diet, repaving and reconstruction by the town, and water main and sewer replacement by the Metropolitan District Commission – are underway in ever corner of West Hartford, and the town’s Engineering Division has provided an update of what can be expected over the next several months.

The town has announced its plans for roadways scheduled to be repaved in the third and final round, which Assistant Town Engineer Greg Sommer told We-Ha.com is tentatively set to begin on Sept. 13.

“A fair amount of activity will be in the Center,” Sommer said.

In addition to being repaved, Four Mile Road will also have a permanent semi-diverter installed where orange barrels have been used as part of a traffic calming trial. 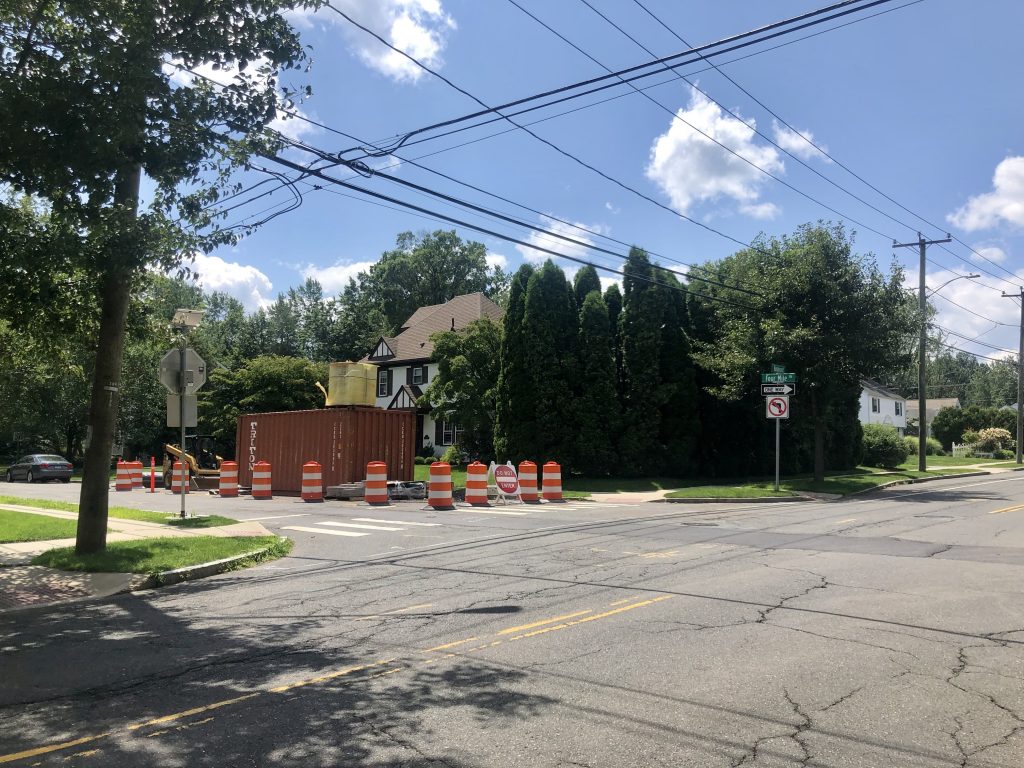 South side of the intersection of Four Mile Road and Boulevard. Photo credit: Ronni Newton

Town Engineer Duane Martin, who also serves as the town’s acting director of Community Development, told We-Ha.com that the four locations where the barrels have been used for diversion – the north and south intersections of Four Mile Road and Boulevard, as well as the intersections of Newport Avenue with Ellsworth and Sedgwick roads – will have permanent reconfigurations.

Area residents have been notified by the town, Martin said. 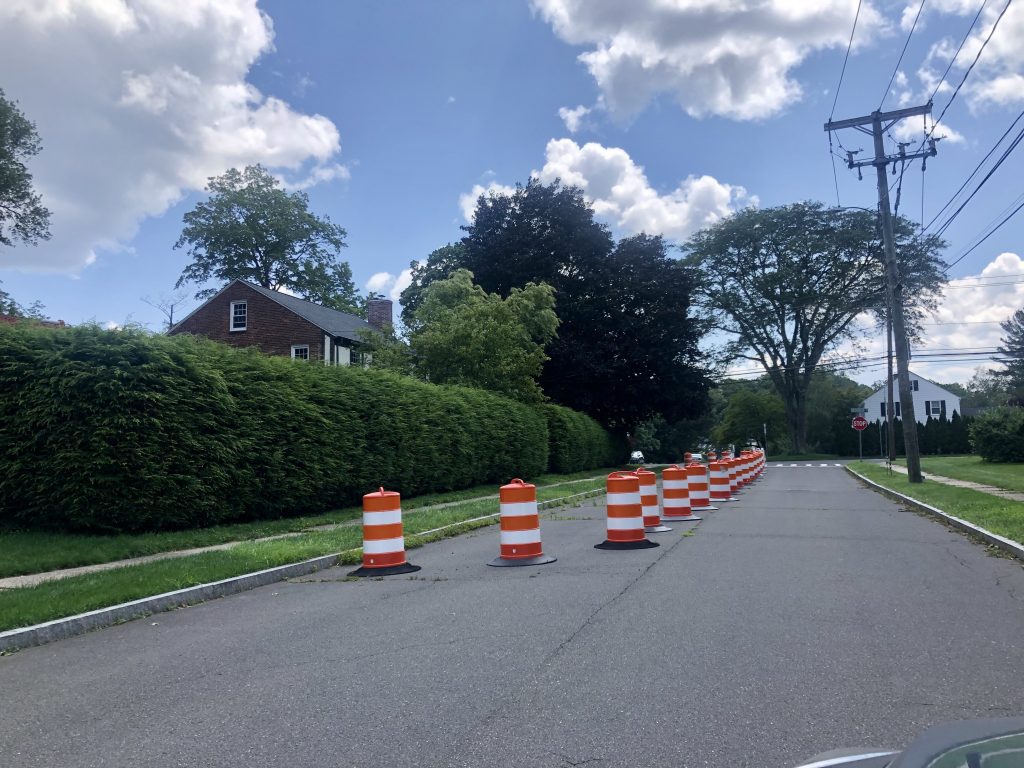 The installation of permanent semi-diverters has been delayed because of other road work being completed on Four Mile.

“We plan on repaving Four Mile in September, and the MDC is replacing the water main,” Martin said. In conjunction with that work, the semi-diverter, which requires saw-cutting the roadway, will be installed.

The semi-diverters – which make certain intersections one-way only and prevent motorists from crossing Boulevard at Four Mile – have been successful in reducing crashes in those areas, but appear to have had some negative impact on Riggs Avenue, the street just west of Newport.

“We have heard from Riggs Avenue residents,” Martin said, and there have been more crashes, speeding, and increased volume as that roadway has been used more often as a cut-through from Sedgwick Road to Boulevard and to the Center.

Martin said that feedback from Riggs Road and adjacent area residents was sought through a virtual neighborhood meeting, and a survey was sent out. As a result, as soon as the permanent semi-diverters are installed on the other roads, a trial will be set up for diversion of Riggs Road traffic similar to what was done at Four Mile Road.

“It will be the same movement prohibitions. You can’t turn from Boulevard onto Riggs or cross Boulevard from Riggs at all,” Martin said.

While not everyone who responded to the survey favored the use of semi-diverters, Martin said this will just be a trial, which will be expected to last through the spring.

“Every time we have tested or installed semi-diverters, they have been a major improvement in traffic safety at those intersections.” Whiting Lane and Boulevard is a great example of the success of the strategy, Martin said.

“The goal in all this, besides improving traffic safety, is to keep the traffic on the main roads,” he said.

Data collection is underway for the North Main Street Road diet, which became operational on Aug.13.

Consulting firm Vanasse Hangen Brustlin, Inc. (VHB) has been engaged by the town to assist with the project and will be monitoring traffic and collecting data, looking at the impact on traffic other north-south routes and other roadways in town, crash frequency and severity, pedestrian and bicycle usage and safety, and traffic speed and queues.

If the evaluation of the road diet does not indicate it has been successful, “we will look at what else can be done,” Martin said. 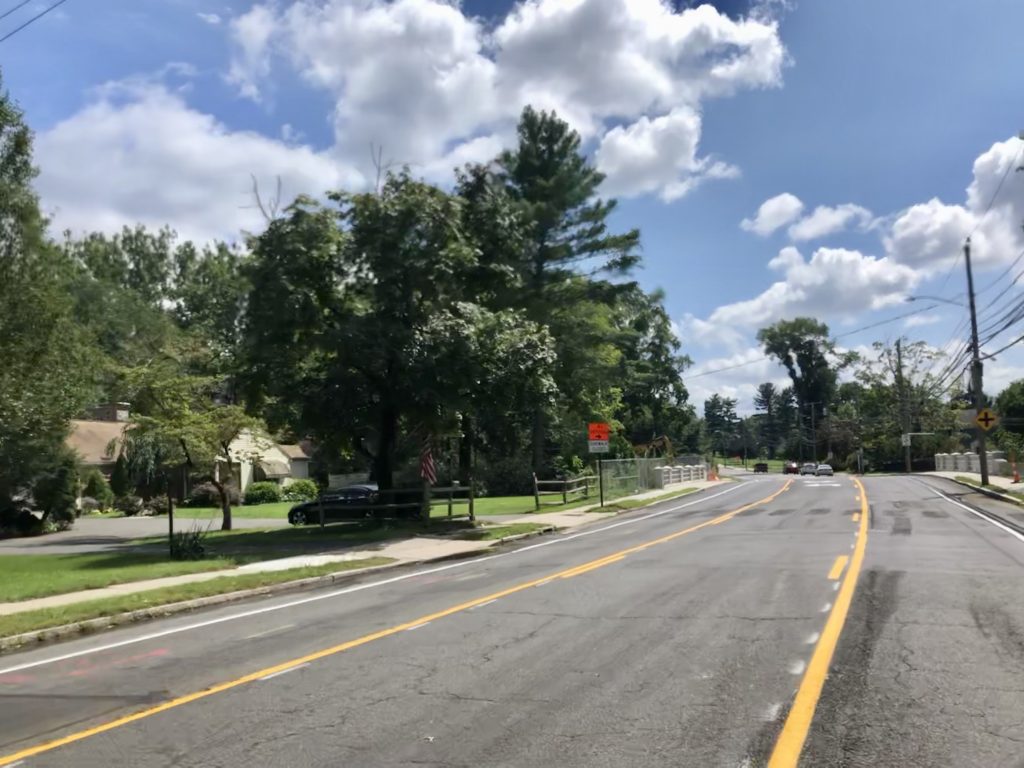 The road diet trial is now underway on North Main Street, and the bridge is reopened. Photo credit: Ronni Newton

Other ongoing roadway work includes MDC projects including a water main installation project on Farmington Avenue, from Trout Brook Drive to Walden Street, and a water main installation and sewer replacement project in the Webster Hill neighborhood, between Crestwood and Bentwood roads.  The MDC will be responsible for the repaving of those roadways once the work is completed.

Other major projects completed or underway

According to the town’s Engineering Division, the following roadways were included in the first and second phases of repaving this year:

The is the list of roadways scheduled for reconstruction in 2021, in the anticipated order:

Roadway reconstructions are more complicated than re-paving and therefore take longer to complete, about one to two months each.

Updates on these projects can be found on the Engineering Division road projects page on the Town of West Hartford website.