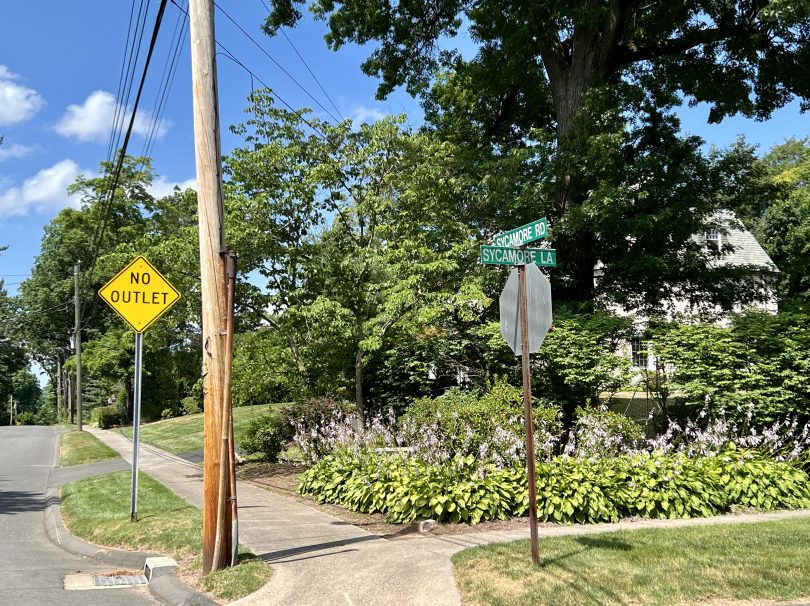 The renaming of New Street as Dinah Road was a relatively smooth process, but renaming a roadway after Peleg Nott has been more complicated.

Isaias Wooden remains committed to having a West Hartford roadway named in honor of Peleg Nott, and while the initial request failed to receive approval due to procedural issues related to the town’s ordinance for honorary and historic renaming of streets, he is not deterred.

The decision itself was complicated. Wooden, with the assistance of classmates, applied in May 2022 to West Hartford’s Town Plan and Zoning Commission (TPZ) to change the name of Sycamore Lane – a single block which runs between Sycamore Road and Prospect Avenue just north of Elizabeth Park, renamed Peleg Nott Lane. He had obtained more than the required 100 signatures to support the application, and a TPZ hearing was set for June 6.

The minutes from the TPZ meeting on June 6, 2022 read: “After a detailed review of all application materials and testimony presented during the public hearing, the TPZ acted by vote of (3-1) (Motion/Prestage; Second/Grassilli) to APPROVE of the requested street renaming. During its discussion and deliberation on this matter, the Commission took into consideration the review standards of Section 155-4 C and found that the proposal established a historic connection and significance to the renaming of Sycamore Lane to Peleg Nott Lane.”

The item was then passed along by TPZ to the Town Council and placed on the June 14, 2022 agenda. Under an ordinance adopted in June 2021 the Town Council can approve the renaming of a roadway by a simple majority vote following approval by TPZ. But the ordinance also states that the TPZ’s initial approval must be by a two-thirds majority vote. There are five members of TPZ, but one member arrived after the discussion began that night and was not eligible to vote, and following the hearing there was one vote against the application.

When the TPZ considered Dinah Road earlier this year, the vote was unanimous in support.

At issue this time was whether the three votes in favor met the threshold of supermajority approval.

Prior to the Town Council considering the matter on June 14, Corporation Counsel Dallas Dodge was asked to review the matter, to determine if the TPZ approval complied with the terms of the ordinance. In a memo dated July 13, he determined that the three votes in favor did not constitute the supermajority needed for approval of the renaming, and therefore the application could not be considered by the Town Council.

TPZ is not able to reconsider the same item for a year, and according to Dodge a new application for the renaming of Sycamore Lane as Peleg Nott Lane cannot be accepted by TPZ until at least June 6, 2023.

Wooden, who graduated from Kingswood Oxford this spring and is headed to Amherst College later this month, said he believes it’s the job of elected officials to do what’s right – and he is committed to having Sycamore Lane renamed Peleg Nott Lane to honor a formerly enslaved man who was born around 1750 in the West Division of Hartford (now West Hartford).

Peleg Nott, who was enslaved by Jeremiah Wadsworth, played an important role in the American Revolution and was fluent in French. He eventually became supervisor of his enslaver’s land – 150 acres in the area of Prospect Avenue and Albany Avenue. In 1780, after he had been freed, he was elected to the honorary position of Black Governor of Connecticut. Peleg Nott’s history has been developed through research in conjunction with the Witness Stones Project.

“The end goal is having Peleg Nott Lane. This is not over,” Wooden said.

Dodge said he and Town Planner Todd Dumais came up with what they thought was a good compromise – renaming a portion of another roadway, one block south, which he said would be at least as high profile if not more prominent. 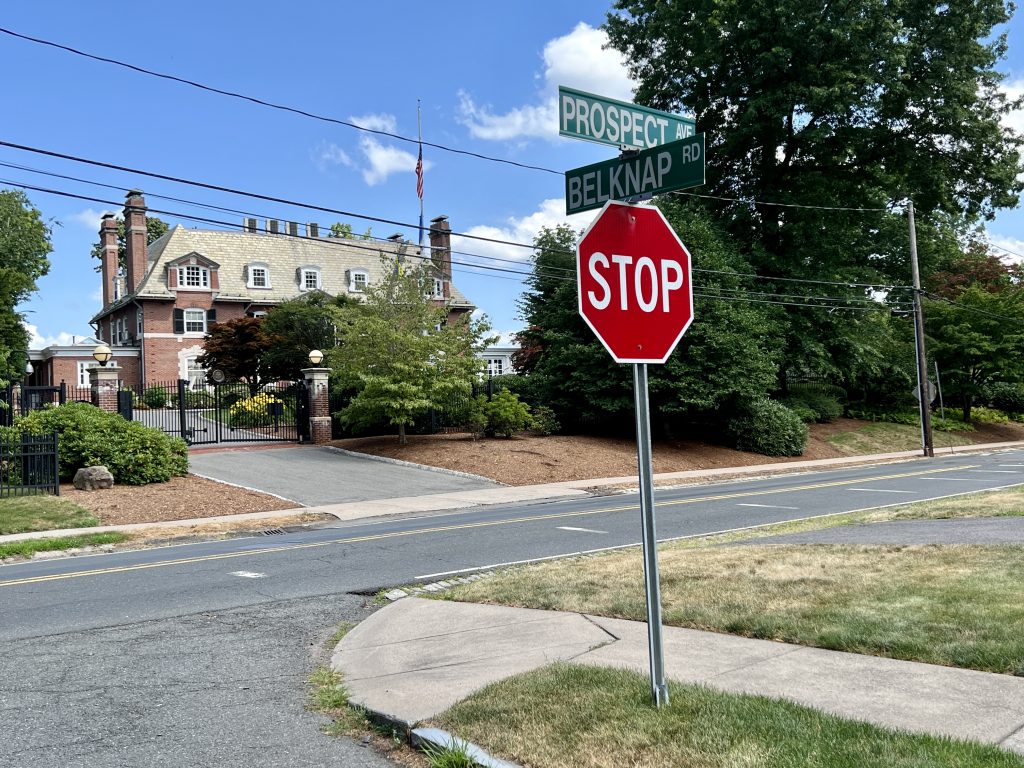 Dodge said he met with Wooden to discuss the decision on Sycamore Lane, and was impressed with his research, and the application. “We still wanted to find a way to help him honor Peleg Nott,” Dodge said. He suggested instead renaming the block of Belknap Road that runs between Sycamore Road and Prospect Avenue – and is directly opposite the governor’s residence across Prospect. While there are several driveways accessible from that stretch of roadway, and it’s adjacent to the residence of Connecticut’s former attorney general, George Jepsen, the addresses are all either Prospect Avenue or Sycamore Road.

Dumais, according to Dodge, reached out to area residents, even knocking on doors, and did not receive any objections.

The homeowners who live on Sycamore Lane, or whose homes front the roadway, had all voiced opposition to the renaming of that street, citing the required burden of notifying individuals as well as financial institutions and other businesses. One who objected suggested a monument to Peleg Nott in lieu of a roadway renaming.

Wooden said he prefers to pursue renaming Sycamore Lane, even if it means waiting a year. In any case, he will need to collect signatures and said he is perfectly happy to restart the process for the end goal.

“The section of Belknap that was offered – there’s nobody living there. That’s not really the proper way of honoring him, it’s a concession,” Wooden said. If the reason is inconvenience, he said, “what’s changing an address compared to the inconvenience of living life in chains?”

“The big thing is that Isaias wants to make the ordinance work,” said West Hartford Town Historian Tracey Wilson, who is one of the leaders of the Witness Stones Project and advocated for the ordinance and has supported local students with their applications for renaming.

Wilson said most people in the community were supportive of renaming Sycamore Lane, and she is disappointed with the Corporation Counsel’s decision on the TPZ supermajority threshold. She doesn’t favor the substitution of a section of Belknap.

Wooden acknowledges that the process got muddled, but feels the offer of the section of Belknap which has no actual addresses is “kind of paltry,” and said the town is shirking its responsibility.

“Many attempts were made to get around the ordinance, but not to make the ordinance work,” Wilson said. She doesn’t want the machinery of government to fail to work properly just because a lawyer is one of those opposed to the roadway change. She’s afraid of the precedent it would set.

“Instead of talking about Peleg Nott, the story has been about the process,” said Wilson.

If he comes back with a new application, Wooden said he is prepared to accept the TPZ decision as long as the process is clearly followed. “If the TPZ votes aren’t there, that’s perfectly fine,” he said, noting that he had been hoping to get a re-vote after the 3-1 decision was deemed insufficient, but also accepts the need to follow the rules that come with living in a democracy.

“Until the TPZ fully says no, I’m not willing to put it to rest,” Wooden said.

Wilson said after the TPZ meeting she and Wooden both felt that there was majority support for the application. The one vote against it was from an alternate.

Renaming a street is a federal designation, Wilson said, and this is a huge deal for the town to officially allow renaming of streets to honor people of color. “Isaias has just taken the high road,” she said, and to do anything else, “is below the dignity of Peleg Nott.”

Later this month Wooden will begin his studies of history and political science at Amherst, with his personal experience adding a unique firsthand perspective to his future academic pursuits.

“In order to move to a brighter future, we have to acknowledge our darker past,” he said. “To bring light to those coming after us.”

The ordinance permitting honorary and historic renaming of roadways is a great tool to help build community, and Wooden said he is hopeful that it will continue to work in that way. Dinah Road was the first West Hartford roadway to be renamed for a person of color, and is a move in the right direction for the town’s goal of fostering inclusivity, he said.

Dodge said the ordinance will be reviewed so that in the future the vote needed by the TPZ for approval would be clearly stated. There may also be consideration of requiring signatures on the application from a certain number of the residents on the street which is the subject of renaming. 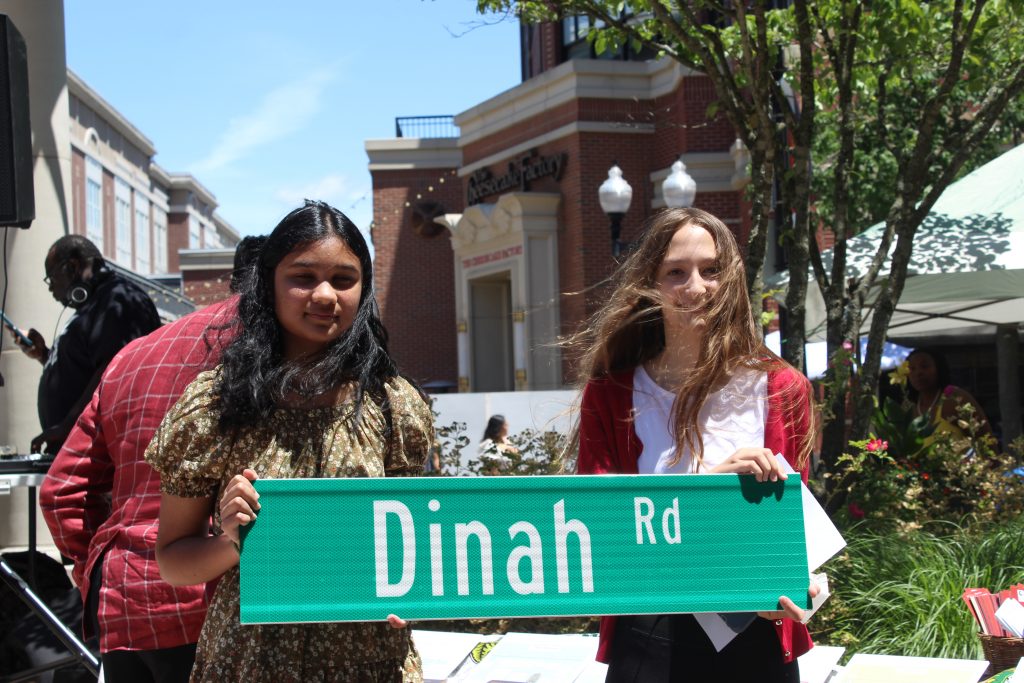